For the second year in a row, The United Methodist Church’s struggle to stay together despite longstanding division over homosexuality was the denomination’s top news story of 2019.

This year, however, the focus was on unity efforts by the Commission on a Way Forward and others, culminating in a special called session of General Conference Feb. 23-26 in St. Louis.

Other stories that made both the 2018 and 2019 top-five list were the United Methodist response to immigrants and asylum-seekers and the church’s relief and rebuilding work after natural disasters. Rounding out the “Top 5” this year were voting irregularities related to the special General Conference and a revote on an amendment to the church’s constitution.

Here's a more detailed recap of the top stories and related articles:

A special General Conference called to deal with the decades-long division over how to be in ministry with LGBTQ people ended with the 438-384 vote passage of the Traditional Plan. That vote, and the divisiveness on display, drew news coverage around the U.S. and beyond.

The Traditional Plan, which takes effect Jan. 1, tightens bans on same-sex weddings and “self-avowed practicing” gay clergy. In April, the Judicial Council found that while some provisions of the plan were still unconstitutional, the rest of the Traditional Plan could stand.

But with the next General Conference just around the corner — May 5-15 at the Minneapolis Convention Center — alternative plans have been developed and submitted as legislation and debate continues over whether The United Methodist Church will hold together.

In May and June, U.S. annual conferences elected more delegates who publicly oppose the Traditional Plan than did so during February’s special General Conference. Active efforts, including officiating at same-sex weddings or supporting gay clergy, are being made to resist its implementation.

While advocates from various perspectives agree the shift was unlikely to be big enough to overturn the plan, strategizing continues to occur ahead of the 2020 General Conference. 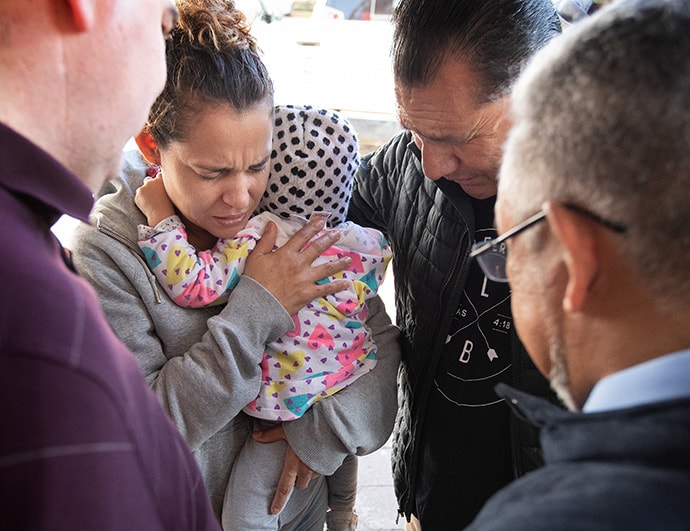 The Rev. Arturo Gonzélez Sandouzl (second from right) and other members of the United Methodist Immigration Task Force pray with Isabél and her 16-month-old daughter Kassandra at a makeshift camp near the bridge leading to the U.S. in Matamoros, Mexico. The mother and daughter traveled from Nicaragua in hopes of seeking asylum in the U.S. Photo by Mike DuBose, UM News.

Throughout 2019, United Methodists and Methodists extended helping hands to displaced people on the U.S.-Mexico border and those fleeing violence in Congo.

United Methodists and members of the Methodist Church of Mexico in El Paso, Texas and Juárez, Mexico, help migrants stranded in Mexico while awaiting asylum. Methodists in Mexicali, Mexico, helped migrants who have fled violence in Central America with food, while in McAllen, Texas, churches help with a respite care center for migrants. The Rev. John Fanestil, a United Methodist pastor, serves Holy Communion weekly as U.S. citizens gather in Friendship Park to glimpse loved ones on the other side of the border wall.

The United Methodist Committee on Relief is providing close to $2 million in grants to JFON and Church World Service to support a three-year pilot project of the Board of Global Ministries, its parent agency, aimed at asylum seekers in the U.S.

In Congo, The United Methodist Church offered shelter to more than 2,500 displaced people who fled violence to Uvira to avoid conflicts between the Banyamurenge and Bafuliro tribes. 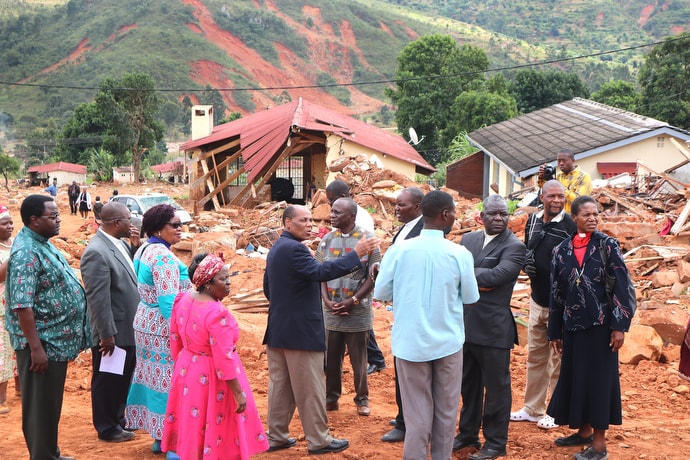 In the U.S., the approach of spring came with deadly consequences. United Methodist pastors of Lee County, Alabama, became a team of crisis counselors after a March 3 tornado killed 23. As the month progressed, churches in Nebraska and other states were dealing with widespread flooding.

By the end of May, United Methodists were continuing to respond to flooding in various U.S. locations and assisting those affected by tornados, including one that struck Dayton, Ohio, area. And California residents once again faced an extended wildfire season.

In Africa, Cyclone Idai tore through Mozambique, Malawi and Zimbabwe in March, ripping tin roofs off houses and hurtling them like deadly missiles that killed and maimed. Otherwise placid rivers jumped their banks and submerged towns and villages, drowning hundreds and leaving hundreds of thousands more with no homes or possessions.

United Methodists were among those picking up the pieces after an April 22 earthquake struck the main island of Luzon in the Philippines and killed at least 16 people. Local churches and homes were among the buildings damaged.

Hurricane Dorian struck the Bahamas on Sept. 1 and lingered, creating both physical and psychological devastation. UMCOR has been working with the two Methodist denominations in the Bahamas to assist with recovery.

“Emotionally, it’s going to scar us for some time to come,” said the Rev. Kenneth Lewis of Freeport. “I have to deal with members who lost everything. The house is gone, belongings gone, no food, no clothing, no vehicles.” 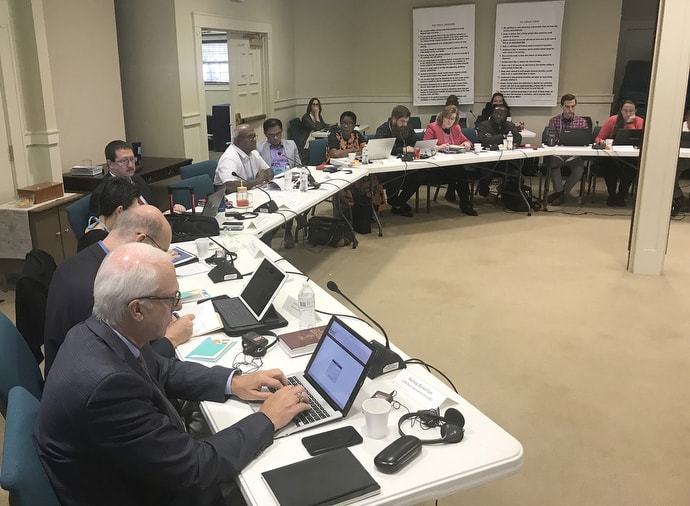 Voting irregularities revealed soon after the adjournment of the special 2019 General Conference called into question at least one crucial vote. A motion to substitute legislation that spelled out a pathway for churches to depart the denomination over LGBTQ issues passed by just two votes.

The General Conference Commission promised a full, independent investigation and decided in a closed-door meeting in August to void the vote on the motion to substitute and ask the Council of Bishops to request the Judicial Council to rule on what the effect of that vote nullification was.

In its Oct. 30 oral hearing on the matter, the Judicial Council questioned the lack of documentation and decided to reschedule the case for the 2020 spring session, noting “our inability to get the information requested during oral argument.” The council did rule on the effective date of the petition, saying it went into effect when the special General Conference ended. 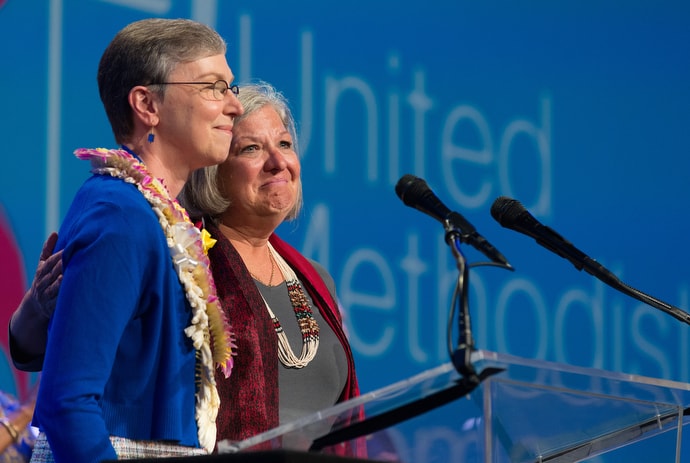 After a revote, United Methodists around the globe have amended the denomination’s constitution to proclaim, “Men and women are of equal value in the eyes of God.” The newly adopted measure also commits United Methodists to work toward ending discrimination against women and girls.

Conference communicators and editors, as well as United Methodist News staff, vote each year on what stories were the biggest news in the denomination.

The revote took place after the Ask the UMC and UM News teams reported incorrect wording in what was initially sent to annual conference voters.

Other stories getting multiple votes in the survey included the:

As help pours in for Kentucky flood survivors, United Methodists work to organize and distribute truckloads of donations — while also offering a listening ear.
Violence

The United Methodist Committee on Relief is sending $10,000 in aid to Ethiopia after deadly clashes between separatists and government forces.
Violence