A long-simmering investigation into improper voting during General Conference 2019 boiled over Oct. 30 during a public oral hearing held by the United Methodist Judicial Council.

Several members of the denomination’s top court questioned the disciplinary authority of the Commission on General Conference to reach a conclusion — announced in August — that a vote on a disaffiliation petition should be null and void because “credible objective evidence” showed four ineligible people casting votes using the credentials of delegates who were not present.

And they asked the two representatives present from the Council of Bishops — Bishop Kenneth H. Carter, council president, and William Waddell, the council’s legal adviser — why they weren’t seeing the evidence.

The Council of Bishops had amended an earlier request to the Judicial Council, asking it to consider the implications of the commission’s findings.

Warren Plowden, first lay alternate for the Judicial Council, grew increasingly annoyed as he launched a series of questions at Waddell and Carter about the commission’s use of an outside law firm, the details of the investigation and the lack of documentation made available to the court. Plowden was a substitute for Lidia Romao Gulele, a council member from Mozambique who was unable to attend the October meeting.

As reported on Aug. 10 by UM News, the commission hired attorneys with the Nashville, Tennessee, law firm Bass, Berry & Sims to work with the auditing firm, LBMC, in the investigation. 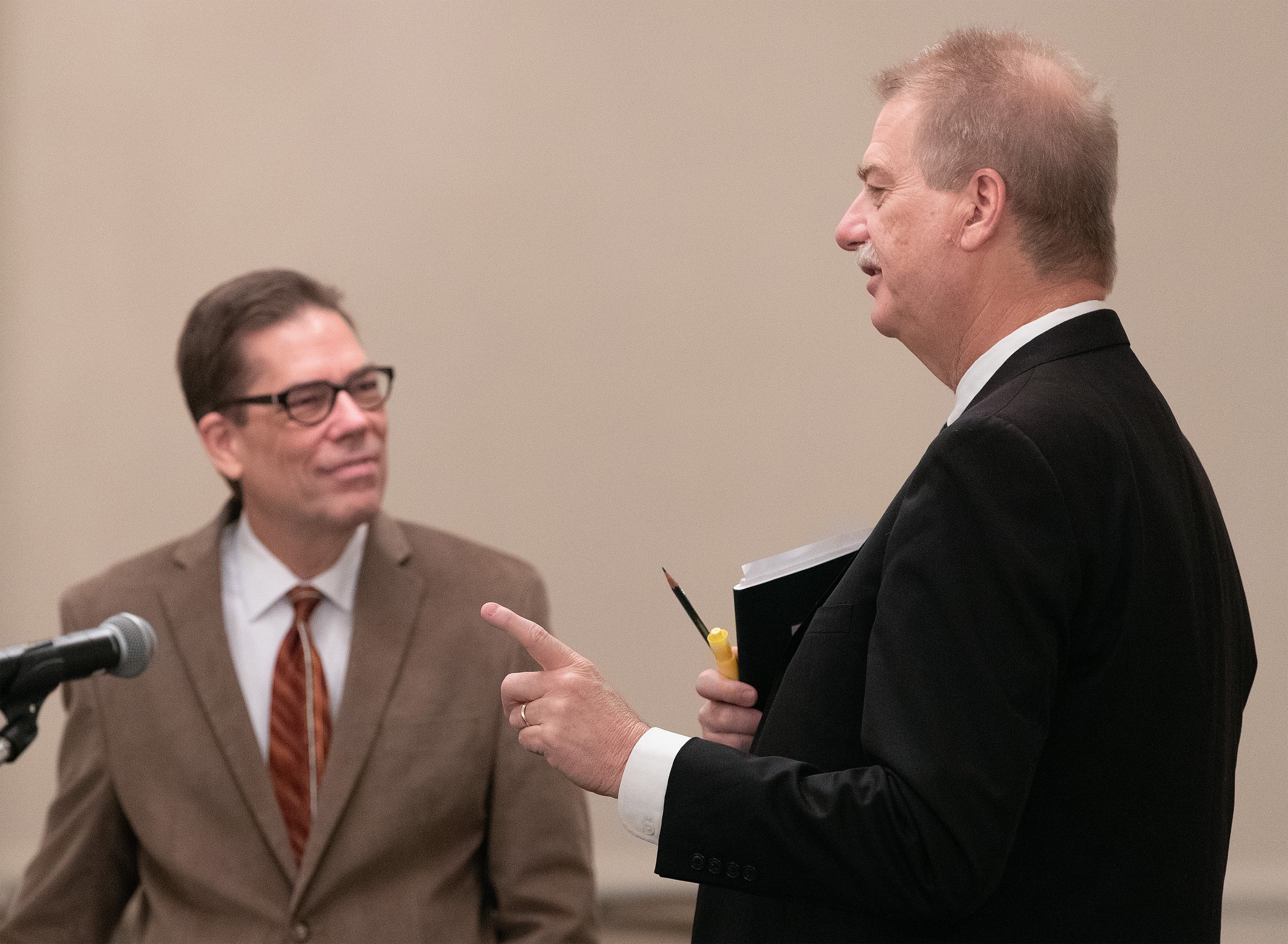 The Rev. Tom Lambrecht (left) and Bishop Kenneth H. Carter visit prior to the start of oral hearings before the United Methodist Judicial Council meeting in Evanston, Ill. Lambrecht is vice president and general manager of Good News and a member of the Wesleyan Covenant Association leadership. Carter is president of the denomination's Council of Bishops. Photo by Mike DuBose, UM News.

The question to the court about improper voting at the 2019 special session in St. Louis stems from the substitution of a minority report, by a two-vote margin or 402-400, for Petition 90066. That petition would allow local churches to leave the denomination.

That action added a new paragraph, 2553, on “Disaffiliation of Local Churches Over Issues Related to Human Sexuality” in the Book of Discipline, the church’s lawbook. The adopted legislation allows, with limitations, congregations to leave the denomination while keeping church property.

In its amended request, the Council of Bishops attached a letter from the Rev. Gary George, secretary of the Commission on General Conference, asking that the bishops refer the matter to the Judicial Council “to examine the potential legal impact of the commission’s finding on the disaffiliation petition vote.”

Plowden asked, more than once, why the court had not received a copy of the audit report and then said to Carter, “I’m assuming you were not sent this audit report with this letter.”

The council president affirmed his statement. “Only the bishops who serve on the Commission on General Conference have seen it,” Carter replied, referring to New York Area Bishop Thomas J. Bickerton and Davao Area Bishop Rodolfo Juan of the Philippines.

The Rev. Luan-Vu Tran, a clergy member from the California-Pacific Conference, wondered why the commission did not send its own representative to the oral hearing to present details.

“You’re asking us to put faith in that letter (from the commission) that makes a factual determination without the ability to verify,” he said to Waddell. “What basis do we have, either factual or legal, to grant your motion?” Tran asked.

Waddell responded that the Council of Bishops wanted to present a request that it believed was important for the court to consider. “The COB is not asking you to do something you deem to be procedurally unfair,” he said.

Deanell Reece Tacha, a lay member from the Great Plains Conference, inquired whether there was a way to “remedy” a situation once a General Conference had concluded “or do we have a vacuum in our procedures?” she asked “That strikes me as, probably, the question for the church.” 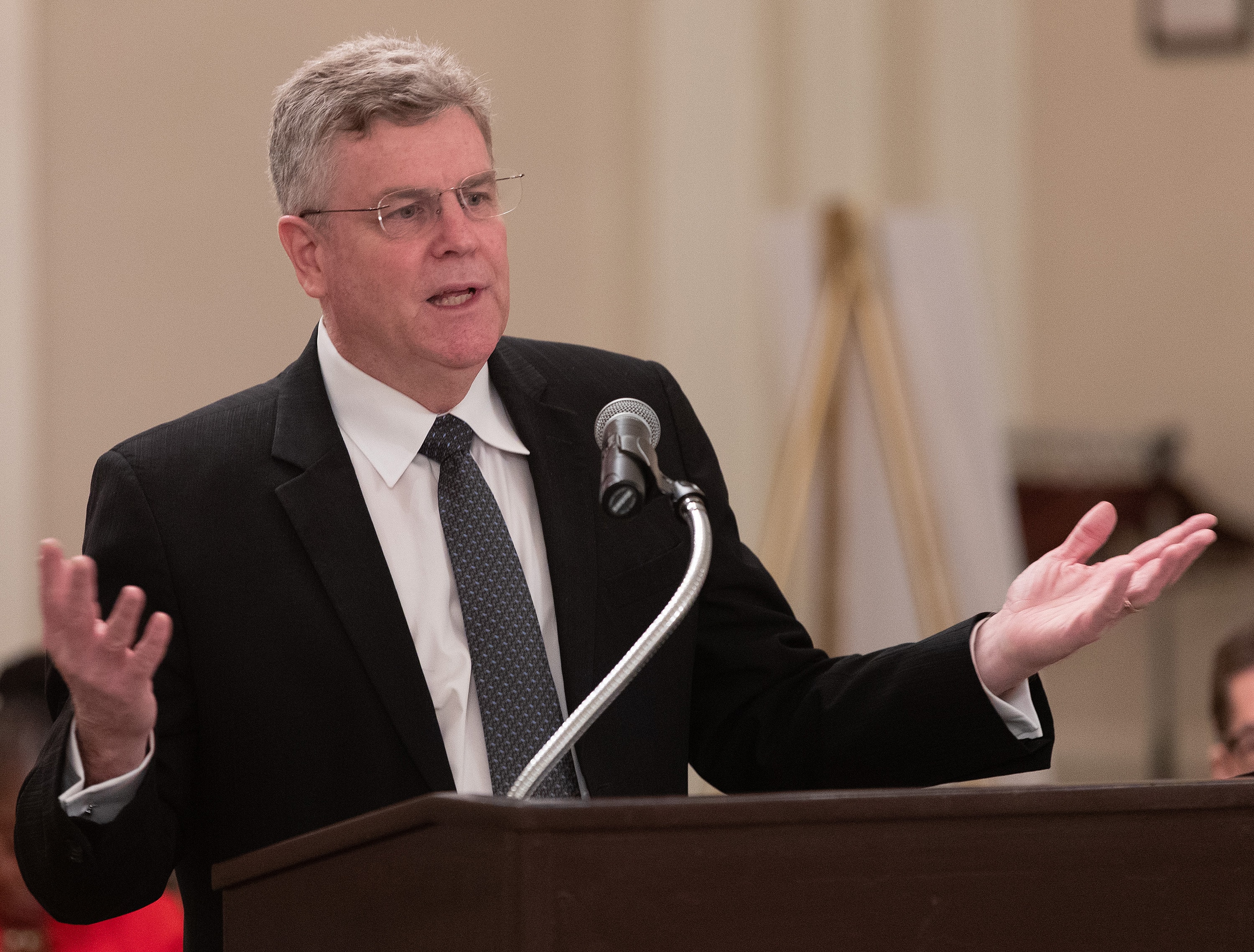 Waddell suggested the Judicial Council turn to the Commission on General Conference for more information. “We want this to be right,” he said. “We don’t want it to be done on some inadequate or unfair basis. We’re not trying to rush or force a decision.”

Earlier in the oral hearing discussion on disaffiliation, the focus was on the validity of the disaffiliation vote, whether the effective date was last February, at the conclusion of General Conference, or on Jan. 1, 2020, and if the Judicial Council had jurisdiction to make a declaratory decision.

The Rev. Thomas Lambrecht, who filed a brief on Docket 4 and was given permission to speak at the oral hearing in opposition of the Council of Bishops, argued that “there is no basis in the Book of Discipline” to nullify a vote after the fact.

Lambrecht said he believes the commission “acted improperly” by declaring the vote to be null and void and that nothing authorizes them to do so. He said he doesn’t even think the commission had the authority to take on the investigation, according to his reading of the Book of Discipline.

“It is questionable that even the Judicial Council could nullify a General Conference action on a voting issue,” Lambrecht said. Nor has anyone seen a written report from commission, he added, to assure people “that the result of their investigation is valid.”

The first of the day’s oral hearings focused on Docket 3, another request for a declaratory decision from the Council of Bishops that asked five specific questions on “the constitutionality, meaning, application and effect of certain petitions adopted as the Traditional Plan.” That plan was approved by General Conference 2019 in February and upheld by the Judicial Council in April.

The first Asian American bishop elected in The United Methodist Church helped the church grow more ethnically and racially diverse. He also had a great sense of humor.
General Church