Nelson Pinos — a homeowner, full-time worker and taxpayer — had been told he “was not a priority for deportation” when he periodically checked in as required with Immigration and Customs Enforcement.

When that changed near the end of 2017, the 45-year-old father of three children who are U.S. citizens sought sanctuary at First and Summerfield United Methodist Church in New Haven, Connecticut, rather than leave his family and return to Ecuador.

The Rev. Vicki Flippin, the pastor of First and Summerfield, was among the members of “Team Nelson” who traveled to Minnesota for a May 14 hearing by a federal appeals court.

No immediate decision was issued by the court, but they remain hopeful, she said.

Flippin and several others from Connecticut participated in a prayer vigil across from the courthouse in St. Paul early that morning, organized by the Interfaith Coalition on Immigration, a local immigrant rights organization.

“While we went into the courtroom, there were about four or five supporters who stood outside and held signs … supporting Nelson and supporting immigrant rights generally,” Flippin said.

The appeal is based on an incident in 1994, when immigration authorities briefly held Pinos, then 19, during a visit to Minnesota. Later, a notice for a court appearance was mailed to a Minnesota address, but Pinos, who lived in New York, said he never received it. A deportation order was issued in his absence and Pinos was not aware of the situation until 2012, when he applied for legal status. 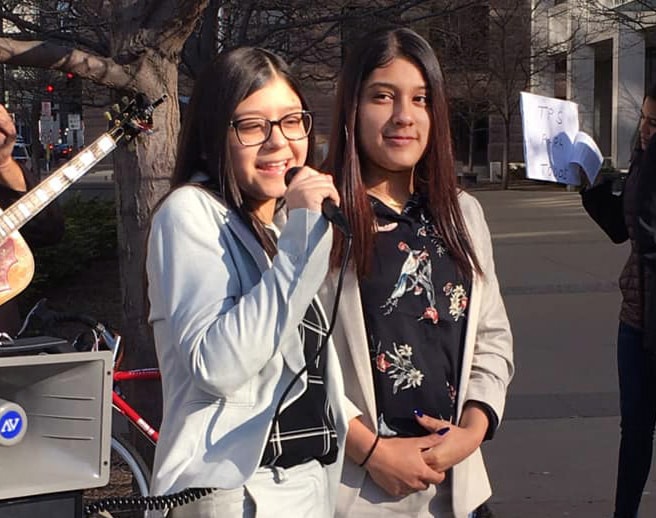 Nelson Pinos’ daughters, Kelly and Arlly, speak at a prayer vigil across from the courthouse in St. Paul, Minn. Photo by Mary Elizabeth Smith.

A statement from ICE said a federal immigration judge issued Pinos a final order of removal in 2015, the Associated Press reported. Pinos was allowed to periodically report in to the immigration agency after previously providing proof that he intended to comply with the order, the statement said. The removal order was still in effect at the time of the hearing.

Attorneys from the Esperanza Center for Law & Advocacy in Connecticut were present for Pinos at the hearing. In an earlier press release, Tina Colon Williams, who argued the case on May 14, noted that Pinos has never had his day in immigration court and had made the appeal “in hopes of being granted an opportunity to be heard before he is removed from the country and separated indefinitely from his family.”

Having his two teenage daughters, Arlly and Kelly, in the courtroom helped humanize his case, Flippin noted. “Tina asked them to stand and I think their presence was really important. I think it changed the tenor of the courtroom when they were introduced.”

An article about the hearing in the Star-Tribune also pointed to the “complicated facets of immigration law” repeatedly cited by Julia Tyler, representing the U.S. Attorney General’s Office, in speaking against Pinos. In response, the Star-Tribune reported, Judge Roger L. Wollman said he couldn’t follow her at those points. “I doubt that the Nelsons of the world … understand them,” he was quoted as saying.

Flippin agrees with that assessment. “It is so complicated,” she said about immigration law. “People are in these moments of crisis and intimidation when they don’t know what is going on. I felt like that story was definitely told in the courtroom.”

By her count, more than 40 people are currently living in sanctuary in places of worship around the U.S., and 10 of those targeted by ICE are in United Methodist spaces.

San Francisco area Bishop Minerva Carcaño told United Methodist News Service that those 10 migrants “face the critical dilemma of being on an imminent deportation list to places in the world where their safety and even lives are endangered.”

United Methodist congregations that have joined the ecumenical New Sanctuary Movement are doing “the hard work” of preparing to receive those in need, she said.

In addition to providing a habitable living space, congregations must train volunteers to provide basic care for someone who may remain with them for an extended period of time. “Volunteers bring them food, take their children to school, address other needs they may have, but most of all, they become a community of friendship and even family for the immigrant brother or sister,” the bishop explained.

“In the process of providing sanctuary, United Methodists have given witness to the fact that their faith has been strengthened by the faith and friendship of those they have welcomed,” Carcaño said.

Congregations also advocate on behalf of those in sanctuary — as First and Summerfield has —or others who might be targeted for deportation.

Flippin said she was heartened to hear that the Connecticut State Senate has just passed a bill that would place additional restrictions on how local police and court personnel work with ICE to detain undocumented immigrants.

Meanwhile, the hope is that Pinos’ case will be reopened and he will receive a stay of removal so he can leave First and Summerfield Church and return home, she said.

“It is a hard time to wait,” Flippin added. “There’s just so much at stake in this decision.”

Even as they grieve the deaths of at least 51 migrants in San Antonio, United Methodists are continuing to care for immigrants and address what drives people to such peril.