No “poor, poor pitiful me” or “what am I going to do now?” complaints have reached the ears of the disaster response coordinator for the Great Plains Conference, despite Nebraska suffering widespread flooding.

“You know, small town USA rallies around each other,” said the Rev. Hollie Tapley. “They’re helping one another. They’re taking care of one another.”

So far, Nebraska has taken the worst of the bad flooding that also touched or still threatens six other states — Kansas, Iowa, Minnesota, South Dakota, North Dakota and Missouri. And more may be coming.

“My fear is that before it is all over with, 100 percent of (Nebraska) will have been affected by this flood, or by snow falling into already full rivers and creeks,” Tapley said. “And then it all is just going to run downstream.”

At least three deaths from flooding in the Midwest are confirmed, and President Donald Trump approved federal disaster assistance for Nebraska, reported NBC.

To make a donation directly to UMCOR’s US Disaster Response, use Advance #901670.
The trouble started when a “bomb cyclone” struck the north central U.S. the second week of March. A bomb cyclone is like a cyclone on steroids, according to PBS. It occurs when there is rapid atmospheric pressure drop over a 24-hour period.

Unexpected helpers have been turning up in Nebraska so regularly that Tapley started cataloguing them in her head as “God moments.”

Among the God moments was the appearance of a young man who drove up with a tractor and offered to help.

“He put people in the scoop part and raised them up to dry land,” Tapley said.

There was also the donation of gallons of Shockwave, which is used to fight mold in homes that have been flooded. Cowboys from a nearby rodeo volunteered to round up a thousand head of cattle for a local rancher, who had lost them when fencing was damaged by floodwater. Volunteers also repaired the fence.

“We were looking at some damage at the church yesterday and trying to figure out how to fix it and how to take care of it before we leave, and a local came up, saw us and he said, ‘I’ll take care of all of that.’ Not even a church person.

The Great Plains Conference received a $10,000 grant from the United Methodist Committee on Relief, which is looking at further support of relief efforts there, as well as assessing needs in the Iowa, Dakotas, Wisconsin and Mountain Sky conference. UMCOR is also providing Emergency Response Team “Train the Trainer” courses in Iowa. 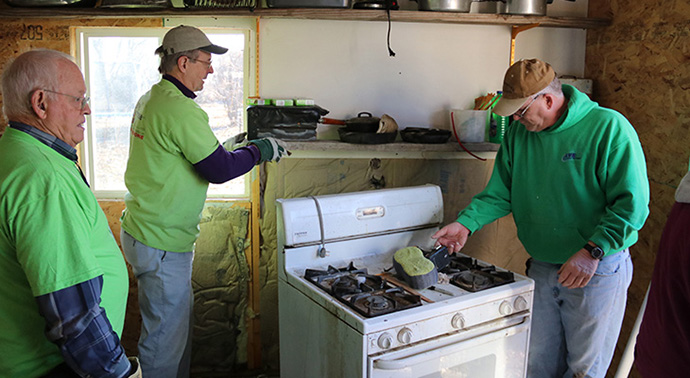 “The floods were caused by quick melting of snow and ice when temperatures dropped (March 15),” said Bud Budzinski. “A lot of water levels are closer to normal now, but north Wisconsin had record snow and there is still a lot of snow that has not melted yet. If the weather gets warm and it rains, that could make the snow melt really fast. A gradual melt should not affect us.”

In the Dakotas Conference, community members were placing sandbags and removing as much ice and snow as they could in anticipation of floods that may arrive the week of March 24, when high temperatures may melt snow and ice in the mountains.

“We do have roads that are closed, but they are not in major thoroughfares,” said Doreen Gosmire, director of communications at the Dakotas Conference.

The entire town of Hornick, Iowa, had to be evacuated, including the Rev. Catie Newman, pastor of Hornick United Methodist Church and a disaster coordinator for the Iowa Conference, and her husband John. Her home was flooded, as was her church next door.

“We moved back in (March 19), when the city said the septic system was up and we could come back,” she said. “We got our hot water and heat today, so we’re excited.” 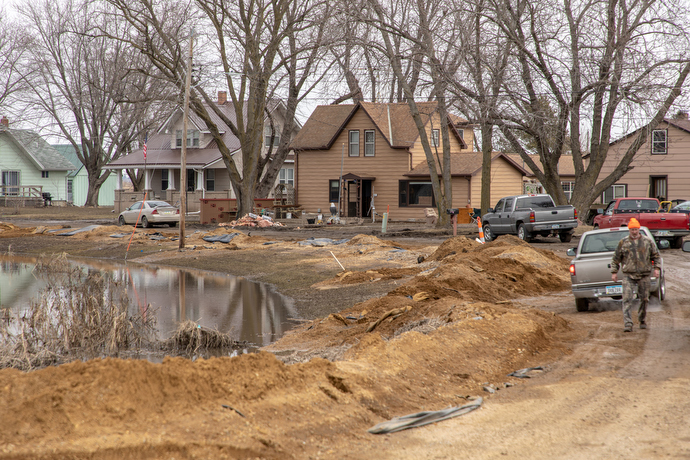 Residents of Hornick, Iowa, begin the process of recovery from recent flooding in the Missouri River basin. “We’re really a very tight community,” said the Rev. Catie Newman of the Iowa Conference. “We’re so blessed in Iowa that people come out and help.” Photo by Arthur McClanahan, Iowa Conference.
Every home in Hornick, which has about 125 households, has some kind of water issue, Newman said.

“Many of them have crawl spaces that run along the Missouri River bottom,” she said. “They got water in their crawl spaces. The problem was exacerbated by the fact that the ground was frozen and what would have normally soaked in or run off couldn’t, because of the frozen ground and then the high volume of water coming.”

Hundreds of volunteers are contributing to recovery efforts, as did the Red Cross, Salvation Army, Woodbury County and the sheriff’s department, Newman said.

“This week the Hornick folks will be in our own space,” Newman said. “I just had a need to have us back in our space. I think that will be healing for many people.”

"The flooding has not required assistance from the Conference Early Response Team, but that may change starting March 24," said Gary Bochman, disaster response coordinator for the Minnesota Conference.

The spirit of innovation seen in the COVID-19 pandemic needs to continue and deepen, church leadership experts say.
Racism

Church leaders praised the justice of the verdict against former Minneapolis police officer Derek Chauvin in the killing of George Floyd, but cautioned that much work lies ahead to overcome systemic racism.
Mission and Ministry

Since 2010, a partnership between Kansas and Malawi United Methodists spans over 9,000 miles and provides life-changing ministries.