For sure, the United Methodist pastors of Lee County, Alabama, will long remember how they became a team of crisis counselors just after the EF4 twister tore through the area on Sunday afternoon, March 3.

When she learned from a TV news broadcast that the county had been badly hit, the Rev. Robin Wilson texted the chaplain at East Alabama Medical Center, offering to help.

Wilson’s husband — the Rev. Jeff Wilson, superintendent of the Montgomery-Opelika District of the Alabama-West Florida Conference — meanwhile contacted other local United Methodist pastors and asked them to go to the hospital.

They did, ministering to victims’ family members and friends streaming into the lobby, while Robin Wilson worked in the emergency room.

The next day, some of those pastors were at a Baptist church in Beauregard, Alabama, scene of the worst damage, to accompany family members who had been summoned by the coroner to identify bodies.

“Just to be in a ministry of presence with them,” said the Rev. Cory Smith, pastor of Auburn (Ala.) United Methodist Church, describing his and his colleagues’ task. “Just to help them know that God was with them in the midst of this.”

Among those killed was a member of Cornerstone (United Methodist) Church, Lynn Grimes. The church, in Auburn, was to have a service for him on March 7. 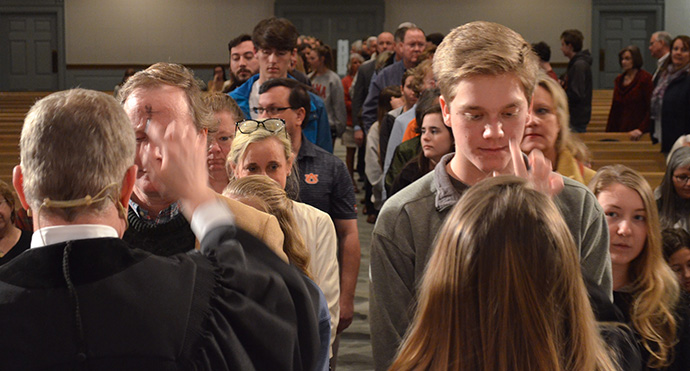 Many homes and other structures in Lee County were damaged by the tornado. President Donald Trump issued a disaster declaration, releasing federal funds for relief, and he plans to visit March 8.

The 1905 sanctuary of Watoola United Methodist Church was clobbered by the twister.

“Half the roof is gone,” said the Rev. Gary Perry, pastor.

The Lee County church’s community building came through and will be the home to worship services beginning this Sunday, as church leaders work with insurance adjusters to decide whether the sanctuary can be salvaged.

The United Methodist Committee on Relief is responding to current disasters around the world.

“For many people in the church, it’s the only church they’ve known,” Perry said. “When they look at it and think about it having to be replaced, it’s difficult.”

The Lee County tornado was one of many that hit across parts of the Southeast on Sunday.

At Cairo United Methodist Church, in Cairo, Georgia, a tornado badly damaged a former parsonage that had recently been remodeled for a youth ministry space. The church had roof and interior damage as well, said Allison Lindsey, director of connectional ministries for the South Georgia Conference.

She said homes “in the shadow of the (church’s) steeple” also were hit.

“It’s a unique opportunity for the church to be in outreach,” Lindsey added.

In Lee County, United Methodist volunteers have been helping with debris removal and roof repair.

“We will respond to immediate and long-term needs in the days and weeks to come,” said Alabama West-Florida Conference Bishop David Graves in a statement.

The United Methodist Committee on Relief has sent supplies and issued a $10,000 grant to the Alabama-West Florida Conference. The conference is accepting checks for recovery.

Officials with the Alabama-West Florida, South Georgia and North Georgia conferences said they have communicated about mobilizing a broad support effort.

Two of the pastors who reported to the hospital on Sunday, Wilson and Smith, had only recently returned from the special General Conference in St. Louis.

“I had a funeral after St. Louis, and this hit the next day,” Wilson said. “I haven’t had quite as much time as I’d like to prepare and lead my congregation into a season of Lent. But perhaps that’s what Lent is for — to realize how little control we have and how to show how we have to put our hope in a savior who came to heal everything.”

As many states’ shelter-in-place orders are being lifted, churches contemplate how — or whether — to return to in-person worship.
General Conference

U.S. conferences are calculating how much a church must pay if it leaves under legislation approved by General Conference 2019. The big cost will be pensions.