As people lift their hands to the sky and try to peer through the thick, steel mesh fence, Guillermo Navarrete says, “Look up, see the sun shining brightly on both sides of the wall, the birds, clouds and the breeze feel no human barrier, they migrate freely.

“This is what the grace of God is like.”

Navarrete, a lay leader with the Methodist Church of Mexico, comes to this beach in El Faro Park every Sunday to bless souls on both sides of a wall that separates families from families, Mexico from the U.S. 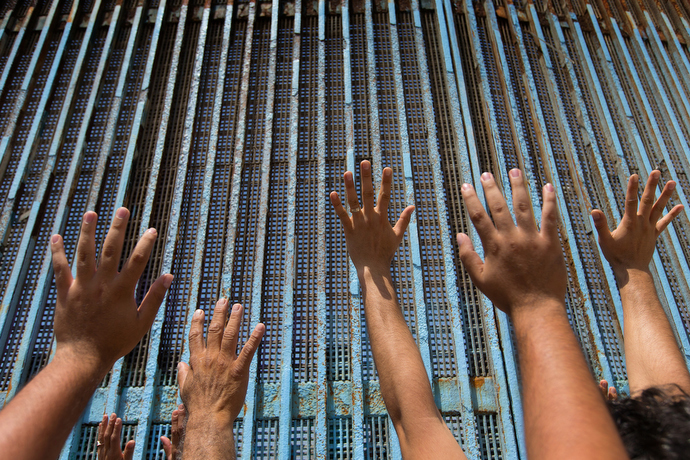 On the U.S. side, which is called Friendship Park, the Rev. John Fanestil, a United Methodist pastor, stands with the U.S. citizens who can barely glimpse loved ones on the other side.

The U.S. Border Patrol allows public access to Friendship Park on Saturdays and Sundays between 10 a.m. and 2 p.m. There is no access limitation to El Faro Park from the Mexico side. 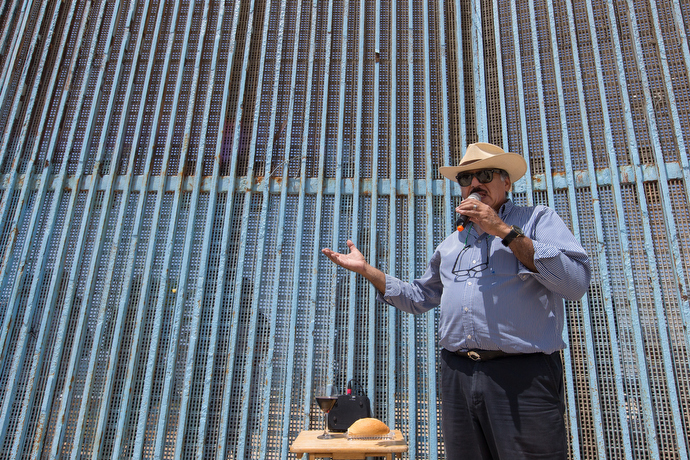 Guillermo Navarrete, a lay leader with the Methodist Church of Mexico, invites parishioners of the Border Church in Tijuana, Mexico, to the Communion table.

For 14 miles, the tall, metal wall winds around streets, through neighborhoods, and along sidewalks and dirt paths before it dissects the sandy beach and ends at the Pacific Ocean.

The tiny, square holes in the mesh fence are just big enough for people to touch each other’s pinky fingers. So, in honor and recognition of the limits the wall places on families, the passing of the peace is touching together pinky fingers. 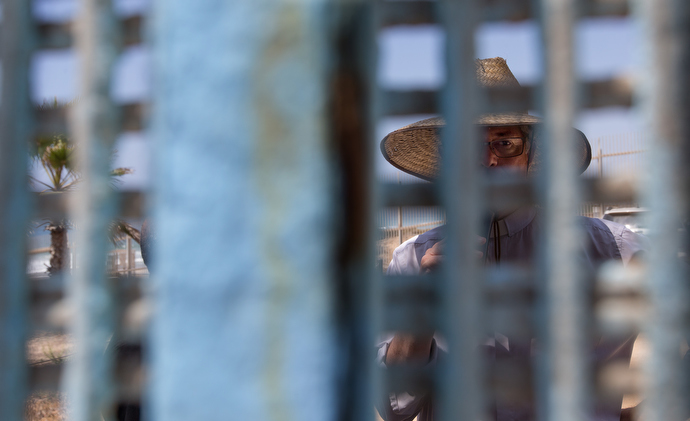 The Rev. John Fanestil, A United Methodist pastor, is visible through the steel mesh of the U.S.-Mexico border fence as he helps lead a cross-border service of Holy Communion from Friendship Park near San Diego on the U.S. side.

Since June 2012, Fanestil has served the sacrament weekly at El Faro: The Border Church/ La Iglesia Fronteriza. Navarrete took over the ministry on the Mexico side about five years ago.

“To my knowledge, ours is the only Christian community in the world where the faithful gather weekly to celebrate Communion while standing in two nations,” Fanestil said. 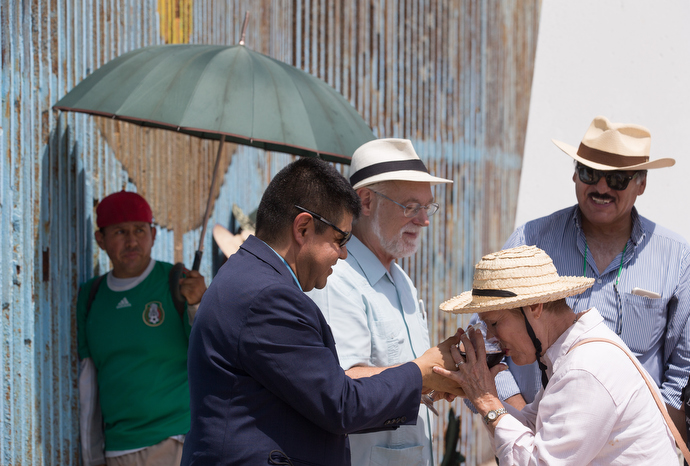 The Rev. Joel Hortiales (second from left), a United Methodist missionary, offers the cup during a service of Holy Communion at the border wall between Mexico and the U.S. at El Faro Park in Tijuana. Serving with him are the Rev. David Farley (center) and Guillermo Navarrete.

On Aug. 19, the Revs. Joel Hortiales and David Farley, United Methodist California Pacific Conference, and Bishop Felipe Ruiz Aguilar of the Methodist Church of Mexico participated in the service on the Mexico side.

Navarrette also brought a cake to celebrate the 47th birthday of the founding of Friendship Park by then-first lady Pat Nixon. In 1971, she inaugurated the surrounding area as California’s Border Field State Park. 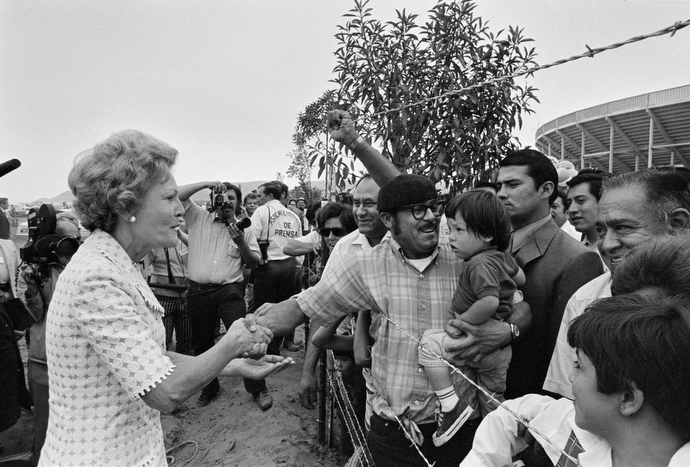 First lady Pat Nixon visits across the barbed wire fence that once marked the U.S. border with Mexico during the inauguration of Friendship Park west of San Ysidro, Calif., in 1971. Photo courtesy of the National Archives and Records Administration.

Nixon asked her security detail to cut the three strands of barbed wire that marked the international boundary and said, “I hope there won’t be a fence here too long.”

Since that day, the fence has become stronger, thicker, higher. 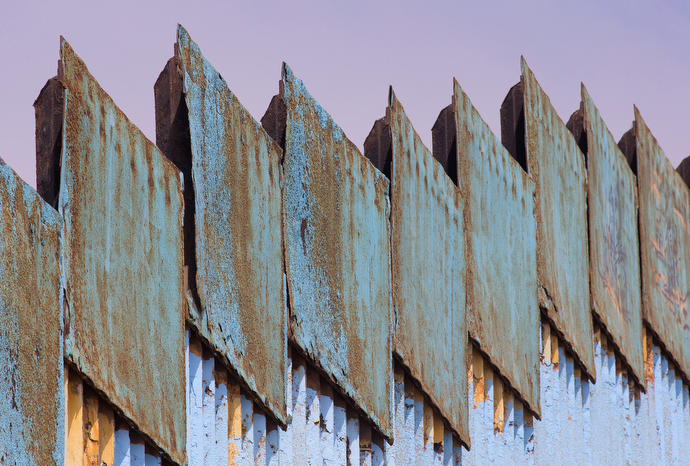 Steel plates stand atop the posts of the border fence that marks the boundary between Mexico and the U.S. at El Faro Park in Tijuana.

Sitting in lawn chairs as close to the fence as possible are three people huddled under an umbrella to protect them from the sun. They are earnestly speaking to loved ones on the other side. A few feet away, a man is engaged in a passionate, long conversation with the unseen person on the other side.

Navarrete said for many people, Friendship Park is the only place they can see their loved ones from Mexico in the flesh — even if they can’t really touch or hug them. 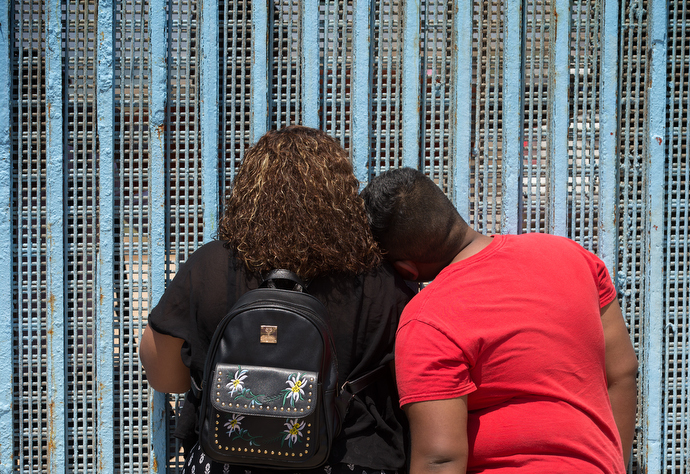 Attorney General Jeff Sessions chose Friendship Park last May to announce the administration’s zero-tolerance policy — the policy that resulted in children being separated from parents and declared everyone caught crossing the border illegally would be prosecuted.

Recently Fanestil has been limited in the number of people he can bring to the small strip of beach, which is overseen by the San Diego Border Patrol. On one recent Sunday he was denied access.

He often gets requests from United Methodist churches and organizations wanting to bring groups to the wall. He has to weigh those requests against the number of loved ones waiting to enter the park to speak to those on the Mexico side.

A true community has developed on the Mexican side. Volunteers bring food and serve a meal after the service to anyone who is hungry. On this day, in addition to the cake, the group also flew a large yellow kite celebrating the occasion.

Emma Sanchez, a member of Dreamers Moms, asked for prayers that she could be reunited with her husband and three boys. She has been separated from them for 12 years as she waits for an immigration hearing. 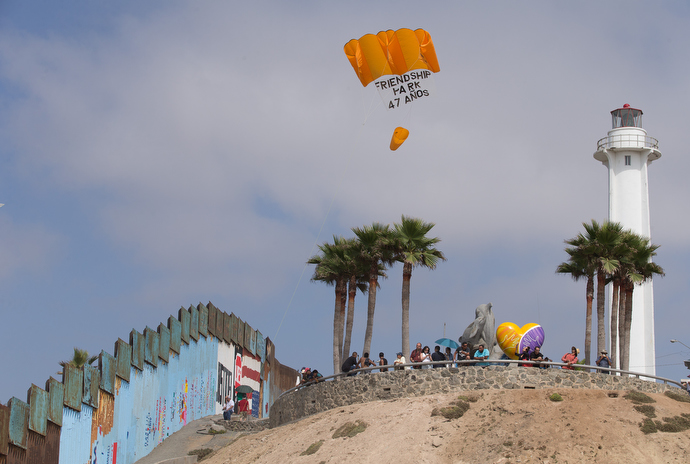 Parishioners of the Border Church in Tijuana fly a kite from El Faro Park to mark the 47th anniversary of the founding of Friendship Park on the U.S. side of the border fence by then-First Lady Pat Nixon.

Dreamers Moms was started by Yolanda Varona Palacios in 2014 when she was deported. The group has grown to more than 1,000 women connected through email and phone calls.

“It is the worst pain in life to be separated from your children,” she said. “I am dying every day.” 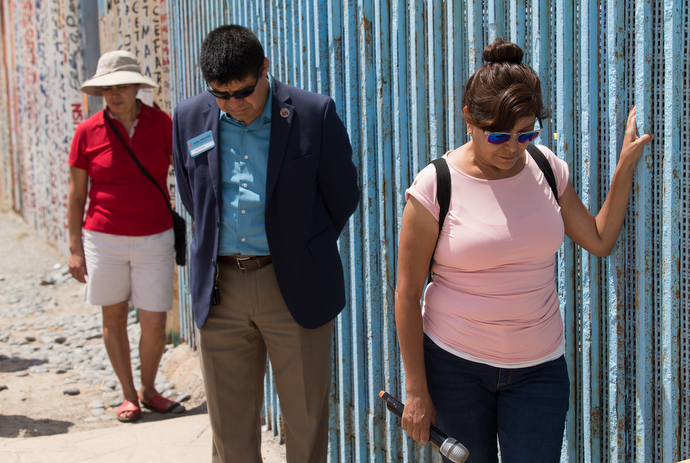 Yolanda Varona Palacios (front) joins in prayer at the border wall that separates Mexico from the U.S. at El Faro Park in Tijuana. Palacios started Dreamers Moms when she was deported in 2014. Behind her is the Rev. Joel Hortiales. Photo by Mike DuBose, UMNS.

An upside-down flag, a national distress signal, is painted on the Mexican side of the wall. The flag was done by a group advocating for U.S. veterans who have been deported. Members of Unified U.S. Deported Veterans regularly attend the Sunday gathering.

Lupita Cibrian Lopez, whose husband, Hector, is a deported veteran, talked about the pain her family has felt. 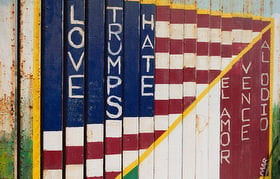 A message of love in two languages decorates the border fence that separates the U.S. from Mexico at El Faro Park in Tijuana.

After his military service, Hector was arrested for marijuana possession and served five years in prison. He was deported because of a law passed in 1996 that noncitizens who commit serious crimes forfeit their right to remain in the country.

Veterans are given a green card while in service but must apply for citizenship on their own, she explained. “Many veterans don’t know they are at risk,” she said.

Lopez said they formed Unified U.S. Deported Veterans as a support system, something her family did not have when her husband was deported after serving six years in the U.S. military.

“They served, they were willing to die. To discard them is not right,” she said.

Fansteil said thousands of people are “dumped” on the streets of Tijuana with no history, no paperwork and have to create new lives for themselves.

Navarrete has been working to help people who find themselves deported and alone in Tijuana.

This Sunday, Navarrete walks over to a shelter to speak to the young men sitting outside.

He starts a conversation with Abraham, who has been deported from the U.S. He is 20 and has a wife and three children he can no longer see or support.

Navarrete tells him there are many jobs in Tijuana, in the factories or restaurants and that he can start a new life and have his family join him. However, he warns that worse trouble awaits Abraham if he tries to cross over the border again and is caught.

A family plays in the surf alongside the Mexico-U.S. border fence at El Faro Park on the Mexican side of the border.

Navarrete said many deportees die while trying to return illegally to their families in the U.S. Others who choose to live in Mexico end up living in harsh, outdoor conditions.

“Deportees are often lost and overwhelmed when they find themselves suddenly in a place they don’t know. Traumatized by their deportation, they frequently end up suffering from chronic depression,” he said.

A U.S. Border Patrol agent keeps watch over beach goers along the border between the U.S. and Mexico just outside Friendship Park near San Diego.

A pilot program started by Navarrete and supported by the California Pacific Conference and the Methodist Church of Mexico prepared 20 men who suffered from depression from being on the streets to become residents and neighbors in Tijuana.

The men were offered counseling, psychological treatment and social work. They attended workshops and lived in dormitories with fully equipped kitchens. 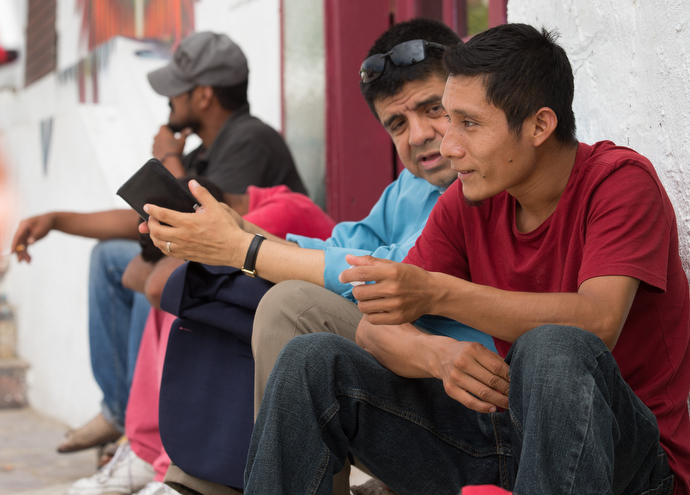 The Rev. Joel Hortiales (center) visits with Elias from the Mexican state of Chiapas outside the Border Angels shelter for migrants in Tijuana.

The pilot program was successful but lacks funding at this point, Navarrete said.

The Rev. Myra Maxwell, co-pastor of Trinity United Methodist Church in south Philadelphia, also heads up victim support services for the district attorney’s office. She’s already walked in the steps of many of the people she counsels, as a crime victim herself.
Human Rights

Because United Methodists value life, we reject suicide, medically-assisted dying (euthanasia), and capital punishment. United Methodists seek, advocate for, and offer life-giving ways in response to and instead of these threats to life.
Violence