In the denomination’s longtime homosexuality debate, fewer United Methodists are keeping to the sidelines.

The fallout continues after the 2019 special General Conference in St. Louis adopted, by about a 53% vote, the Traditional Plan that tightens enforcement of church bans on same-sex weddings and “self-avowed practicing” gay clergy.

Some United Methodists are taking public stands to support the plan, while others are taking steps toward resistance. The denomination also has seen a drop in giving following the rancorous special session.

Meanwhile, various United Methodists are working on ways for the church to split into two or more denominations based on perspectives on LGBTQ status.

Still unknown is what impact all this will have when the denomination’s multinational lawmaking assembly next meets May 5-15, 2020 in Minneapolis. There is no guarantee the 862 delegates will adopt any plan of separation. 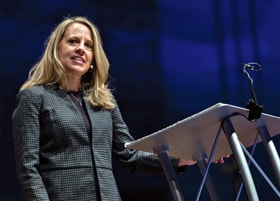 However, one thing is clear: More United Methodists across the theological spectrum are speaking up and strategizing ahead of the 2020 General Conference.

“Although we are a bit too close to unfolding events to make claims for the importance and uniqueness of this moment in the Methodist experience, we can see some parallels in Methodist history,” said Samuel Avery-Quinn, an Appalachian State University lecturer who has written about U.S. Methodist history.

As recently as the 2000 General Conference, he pointed out, the denomination had an extremely contentious dispute over LGBTQ inclusion that led to more than 180 arrests and left anger all around.

What’s different now, he said, is that GC2019 “put the future shape of the Methodist connection on the table” and tied differences over LGBTQ rights to broader ideological tensions in the church.

In the days and weeks immediately following the special General Conference, a number of United Methodists displayed their rejection of the Traditional Plan in multiple ways, including wrapping church signs in rainbow flags to show solidarity with LGBTQ people.

Since then, Traditional Plan supporters also have publicly expressed their views.

“We support the decision of the 2019 Special General Conference and disagree with all actions contrary to the 2019 decision,” said the National Chinese Caucus of The United Methodist Church in an Oct. 19 statement. Forty-one caucus members voted for the statement and three abstained.

The caucus previously took a position in 1999 to affirm that they see same-sex behavior as incompatible with biblical teaching. “The reason for NCC to take the public stand this year is to demonstrate its consistency in this subject matter,” the Rev. Peter Lau, the caucus’ immediate past chair.

The Wesleyan Covenant Association, which advocated for the Traditional Plan, has endorsed a GC2020 proposal for separation — New Denominations of United Methodism Plan, better known as the Indianapolis Plan. The group has released a draft Book of Doctrines and Discipline for a new traditionalist Methodist denomination.

However, the WCA also said in a statement, that “if a mutually agreeable plan of separation does not occur,” it would push to strengthen the Traditional Plan.

The Association of Korean Churches, a part of the larger United Methodist Korean Caucus in the U.S., announced in September that it would be connectional with the WCA and work towards amicable separation of the denomination.

“Although we are situated in the rapidly changing circumstances, we promise to do our best in firmly protecting the biblical tradition of the Korean-American Church and making a new expression of The United Methodist Church,” the group said.

Nexus board members say they are not of one mind, but they “are united in the commitment to stay as one ministry and one body, whatever may be the outcome of the 2020 General Conference.” 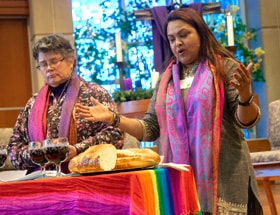 The Revs. Martha E. Vink and Alka Lyall officiate at the Holy Communion service at the Advent Gathering organized by UM-Forward and Methodists in New Directions. The Dec. 3-4 gathering at St. Andrew United Methodist Church in Highlands Ranch, Colo., aimed to work toward a fully inclusive form of Methodism. Photo by Joy Butler, UM-Forward.

However, traditionalists aren’t the only ones calling for a split. The group UM-Forward has submitted legislation that would dissolve The United Methodist Church entirely and form four new denominations in its wake.

About 60 United Methodists from 28 annual conferences attended a Dec 3-4 Advent Gathering sponsored by UM-Forward and Methodists in New Directions to cast a vision for a fully inclusive and thriving form of Methodism.

“During the season of Advent, as we prepare to celebrate the ‘new thing’ God did when Jesus Christ was born, I am more convinced than ever that God is getting ready to birth a new, just and inclusive Methodist Church,” said the Rev. Martha E. Vink, co-chair of Methodists in New Directions.

At the same time, a new effort is gearing up to resist the Traditional Plan, which takes effect Jan. 1 in the U.S. and a year after General Conference 2020 in central conferences — church regions in Africa, Europe and the Philippines. The new rules include greater restrictions against the ordination of “self-avowed practicing” gay clergy and mandatory penalties for clergy found guilty of performing same-sex weddings.

The coalition of groups behind the opposition effort, Resist Harm, have different opinions about separation but stand together in their rejection of the Traditional Plan. The effort’s website offers prayers, worship resources as well as other ways to take direct action.

“The church’s stance against LGBTQ people results in cruelty, discrimination, isolation and spiritual exile,” said Pat Luna, an organizer of Resist Harm, in a press release. “We believe that the call of Christ to the church is expressed in our baptismal vows to resist evil, injustice and oppression in whatever forms they present themselves, so we are taking a stand.”

The five bishops in the Western Jurisdiction, which encompasses seven conferences in the westernmost United States, have pledged to provide “a safe harbor” for LGBTQ clergy and those who officiate at same-gender weddings.

Individual annual conferences are also preparing in their own way.

The Greater New Jersey Conference voted to allow congregations to decide how to include LGBTQ people in ministry while allowing disagreement.

The Norway Annual Conference established a commission to seek a way to fully include LGBTQ individuals and map possible consequences.

Even as reactions continue to GC2019, a small group of U.S. United Methodists representing traditionalist, progressive and centrist organizations is working with Sierra Leone’s Bishop John K. Yambasu to reach some agreement about separation ahead of the coming General Conference.

There are also calls to find ways for the church to stay together despite differences. In late summer, bishops in Africa and the Philippines each released separate statements opposed to the dissolution of the denomination. Filipino United Methodists have submitted legislation to GC2020 that aims to preserve church unity.

Church splits are nothing new for the people called Methodist. The denomination’s U.S. forebears experienced some kind of fracturing every few decades throughout the 19th century — most famously dividing over slavery in 1844.

But today’s United Methodists have little experience dealing with the full ramifications of denominational breakups, said the historian Avery-Quinn. For much of the 20th century, church leaders worked toward reunification and stronger connection.

“If the church is to remain united, it will depend on the will of the bishops and other denominational leaders to make bold stances on defining a new Methodist connectionism for the 21st century,” Avery-Quinn said.

“Whether Methodists can place their shared religious identity and shared heritage above their current political, tribal identities and accept a bipartisan solution remains to be seen.”