United Methodists in Porac and Floridablanca are picking up the pieces after a powerful earthquake struck the main Philippines island of Luzon on Monday, killing at least 16 people.

She said church members are dealing with the situation as best they can.

“The devastation brought pain and damage to many, and recovery is not that easy,” she said.

The members of Camachile United Methodist Church are predominantly Aeta, indigenous peoples who live in isolated mountainous parts of the island of Luzon.

Casupanan-Dela Cruz said more than 100 families, including church members, stayed overnight at a basketball court near the church after Monday’s 6.1-magnitude quake.

A second earthquake rattled the island of Samar in the central Philippines on Tuesday and two more earthquakes struck Mindanao on Wednesday.

Casupanan-Dela Cruz said that there are eight United Methodist mission churches in the area. Six of those have been badly or slightly damaged, she said, and there is still no news on the fate of the missions in the more remote areas of Tirya and Calixto.

Rommuel S. Flores, disaster management coordinator in Manila (a program supported by the United Methodist Committee on Relief), traveled to Porac for an initial assessment.

“We coordinated with the local disaster risk reduction team of the (Pampango Philippines) Conference (in the Manila Episcopal Area) … to determine the intervention,” he said.

“In the next few days, we will be gathering data for the DANA (Damage Assessment and Needs Analysis) as basis for any action or intervention.”

“I am in sympathy with those who have been victimized in the area of Porac. I am very sad to hear the report that many were affected (and) some lives are lost.”

The bishop said that the church has made an appeal to all local churches and conferences to gather support, both material and psychosocial, for survivors.

“I am appealing to our people to please gather anything that we can share to those who have been victimized,” he said.

The Middle Philippines Conference, which is holding its annual conference session this week in Cabanatuan City, resolved to pool resources together and send them to Asuncion Perez Memorial Center at The United Methodist Church headquarters in Manila. The delegates pledged to give 32 sacks of rice, blankets, clothes and money.

Asuncion Perez director Liza Cortez told UMNS that the center also is planning to offer counseling to children traumatized by the earthquake. 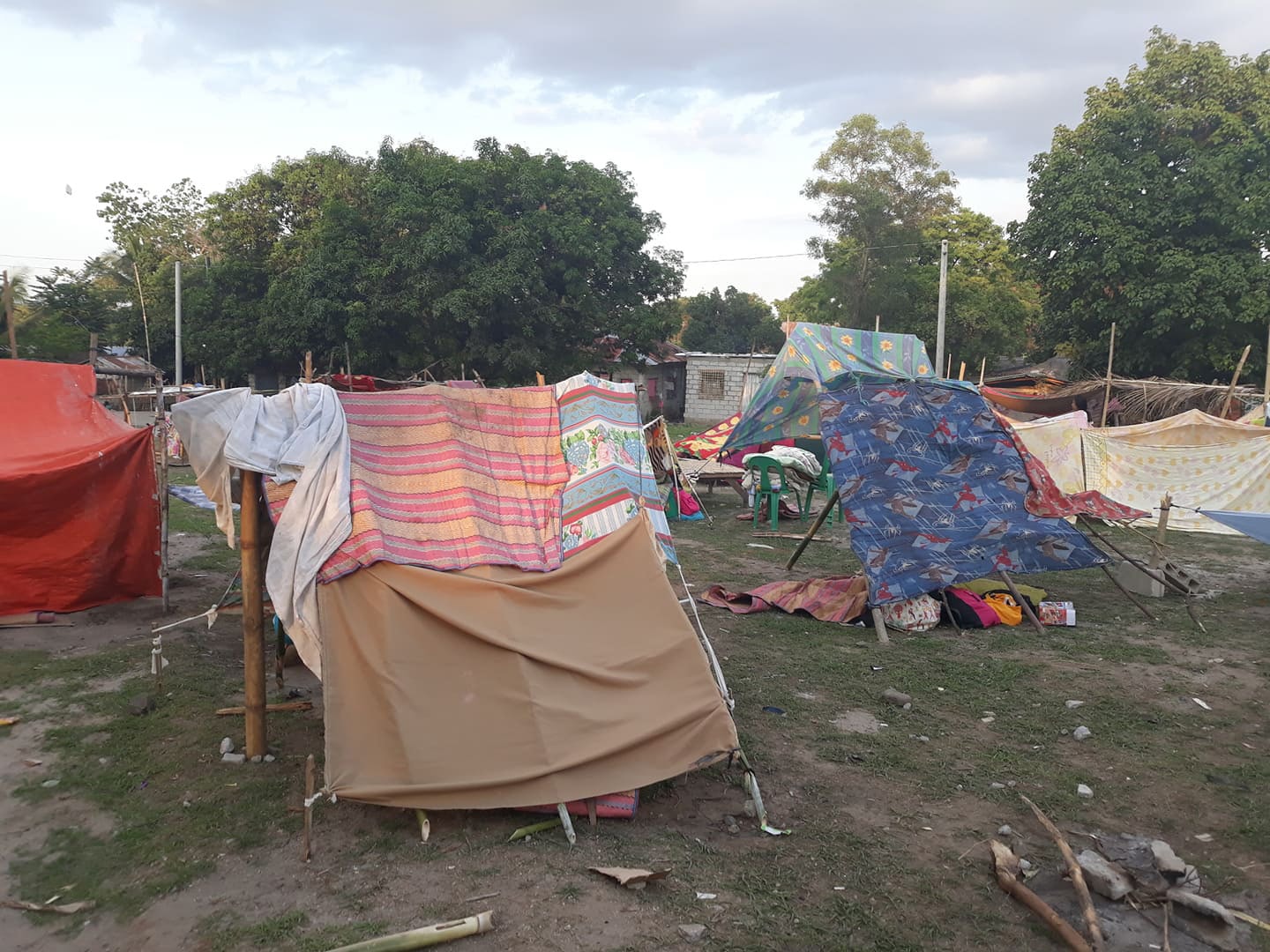 Earthquake evacuees take refuge in tents in Porac, Philippines, in the Pampanga province northwest of Manila. The indigenous Aetas built the tent city after the eruption of Mt. Pinatubo in 1991. Photo by Rommuel S. Flores.
During his visit to Porac, Flores went to a tent city built by the Aetas after the eruption of Mt. Pinatubo in 1991. He said earthquake evacuees have taken refuge in the tent city, where some Aetas still live.

“They are so scared. Just this morning they had strong aftershocks. Tonight is their third night there,” he said earlier this week.

He said the evacuees will remain at the tent city until the Philippine Institute of Volcanology and Seismology tells them it is safe to return home.

Casupanan-Dela Cruz said she saw a mother crying in the street looking for her children after the first earthquake. But amid the chaos, she said, there were moments of God’s grace.

“As I reflected last night in my tent bed, (I thought) what a great prayer time that we had at the basketball court of Camachile. We as one community cried out to God for safety and protection. Regardless of our religion, we prayed together,” she said.

She said she is hopeful for the future, emphasizing the resilience of faithful United Methodists.

“I thank God for the resilience of people who come together to pick up the pieces and hope in the Lord to bring restoration to community and church life that would be stronger in faith and deeper in dependency on Christ our Savior.”

United Methodists in Holston Conference moved beyond prayers and got to work after learning about devastating floods and storms recently experienced by neighbors in Eastern Kentucky and Southwest Virginia.
Disaster Relief