A father and his 8-year-old son stay close to each other on the small blue mat next to the windows in a building on the grounds of the Basilica of Our Lady of San Juan del Valle.

Other children are running across the cool terrazzo floor, weaving around tables, dodging grown-ups, riding plastic scooters, playing with toys and laughing.

The adults — who are wearing ankle monitors that track their movements until their cases are heard — are quietly sitting at tables eating, chatting in small groups, watching the children and talking to volunteers. Some people are grabbing short naps on the thin rubber mats under the bright glare of the fluorescent lights and all are anxiously awaiting the next part of their journey. 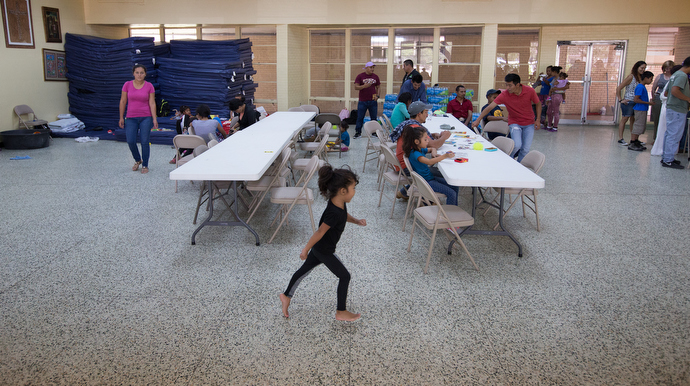 A young girl scampers across the cool terrazzo floor while families rest and relax at an overflow shelter for recent immigrants at the Basilica of Our Lady of San Juan del Valle.

Catholic Charities runs the Humanitarian Respite Center in downtown McAllen, this building on the Basilica’s grounds — nicknamed the “hotel” — is for the overflow of immigrants. The United Methodist El Valle District helps purchase needed supplies for this center and for La Posada Providencia, another respite center located in San Benito.

The people gathered here have been arrested and held in a border patrol detention facility for up to 72 hours.

They arrive dirty, hungry, often speaking no English. They are abandoned by the coyotes — smuggler of undocumented immigrants — who they paid several hundred dollars to get them safely to the U.S. 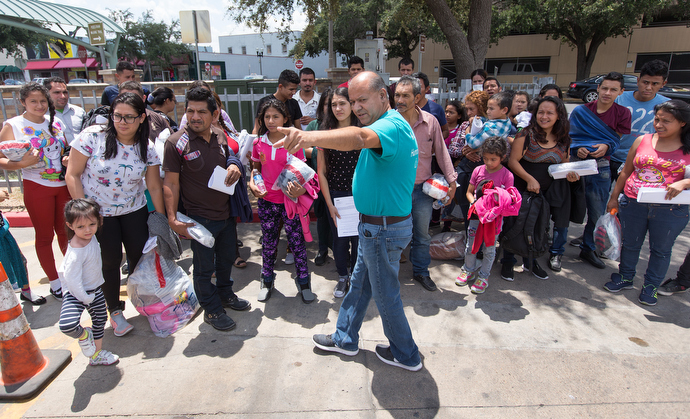 Eli Fernandez (center), a volunteer with Catholic Charities, helps direct immigrants who have been released from detention by the U.S. Border Patrol and brought to the bus station in McAllen, Texas.

The respite center gives them a temporary safe place to land. Family or sponsors buy bus tickets for them while they await disposition of their case. Most are only in the respite center for 24-hours or less as they wait for the bus to their destination.

The father and son are waiting for their bus to Pennsylvania, where they have some cousins. They have been offered a shower, clean clothes, food and some much-needed rest. They asked to be called Oliver and Anthony instead of their real names to protect them as they await a court hearing about whether they will stay in the U.S. or be deported. 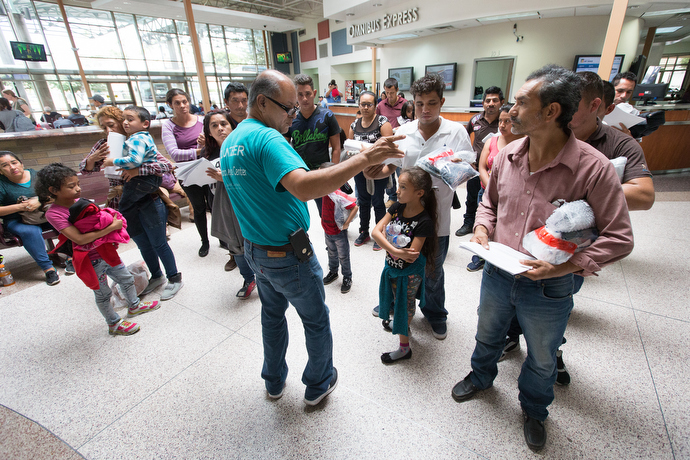 It has been a long and frightening journey for these two who fled their home in Honduras, Oliver said through an interpreter. He described the trip as hot — “very high temperatures.” He said he was afraid for their lives, afraid of kidnappers. Plus they had to leave his wife, Anthony’s mother, behind.

“It is a big sacrifice to come,” he said. “But I am here to give my son a better life.” 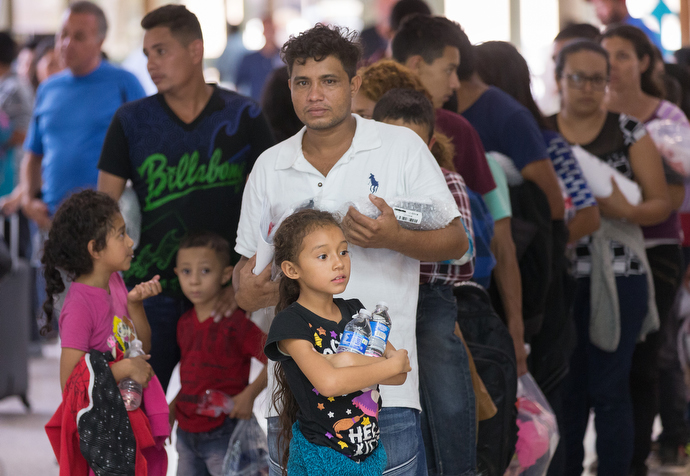 Bewildered immigrants who have just been released from a U.S. Border Patrol detention facility clutch water bottles and personal belongings while they wait in line at the bus station in McAllen, Texas.

The family cannot afford to pay for school and because he is not in school, Anthony becomes a target for dangerous gangs in Honduras, Oliver said.

The nation’s attention was focused on the small town of McAllen, Texas, after the Trump administration issued a zero tolerance policy that resulted in children being separated from their families at the border. More than 500 children remain in government custody a month after a court-ordered deadline for reuniting families.

Susan Hellums, United Methodist Border Area Coordinator for the El Valle District, Rio Texas Conference, and First United Methodist Church in McAllen, coordinated a visit for United Methodist News Service from July 31-Aug. 4 to report on the ways the church is offering ministry to those crossing the Texas borders. 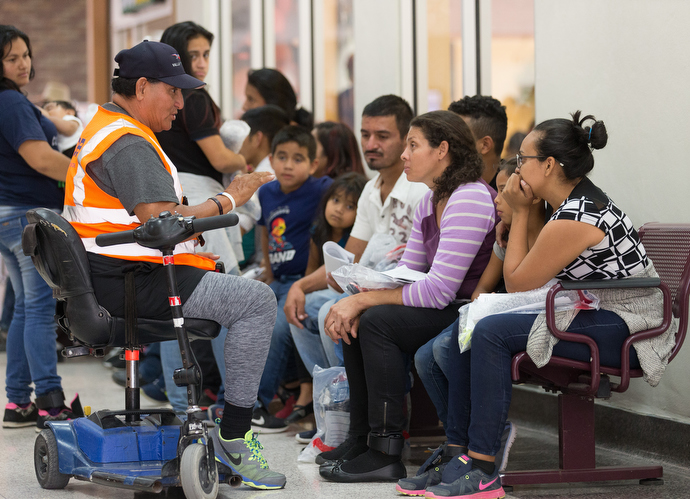 Volunteer Luis Guerrero (on scooter) gives immigrants a lesson in how to navigate the U.S. bus system at the station in McAllen, Texas. Guerrero is an ex-firefighter who lost one of his legs in the line of duty. He comes to the bus station almost every day to help. 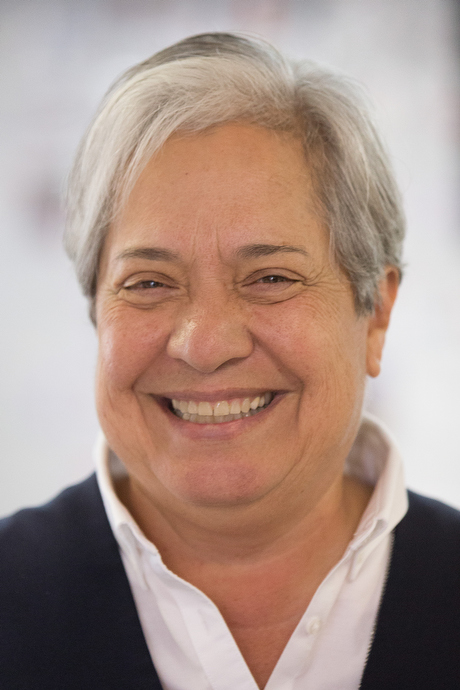 Sister Norma Pimentel is CEO and director of Catholic Charities for the Rio Grande Valley in McAllen, Texas.

Hellums is well-known among advocates for immigrants, the border police and other religious and secular organizations involved in immigrant ministry.

Many times, those advocates said, “We don’t know what we would do without the Methodists.”

Sister Norma Pimentel, CEO and director of Catholic Charities for the Rio Grande Valley, greets Hellums with a warm hug at the Humanitarian Respite Center in downtown McAllen, just a few blocks from the busy bus station.

“ICE (U.S. Immigration and Customs Enforcement) has notified us there will be 75 people arriving today,” Pimentel said. She and Hellums quietly discuss supplies the center needs.

About three hours later, dazed passengers spill out of the dark interior of a dusty bus into the bright, white-hot sunlight outside the bus station in downtown McAllen. 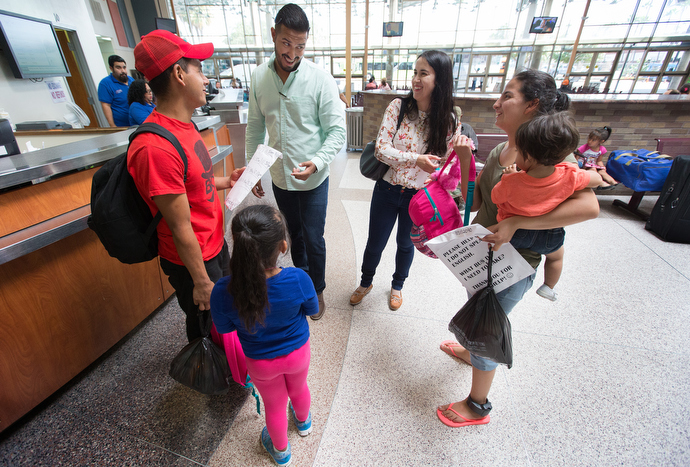 The adults are clutching plastic bags containing personal belongings including shoelaces that were taken when border police arrested them. All the adults have ankle monitors.

Mothers and fathers hold tightly to their children’s hands while trying to absorb where they are and what they need to do next.

There are people of all ages, from babies to elders. 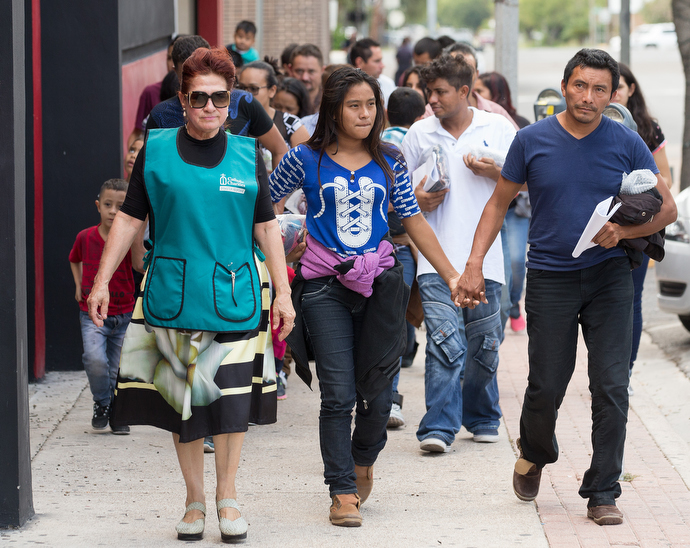 Catholic Charities volunteer Blanca Muñoz (left) leads immigrants who were recently released from a U.S. Border Patrol detention facility to the Humanitarian Respite Center in McAllen, Texas, where they can shower, eat and rest while waiting for buses that will take them to friends or family elsewhere in the U.S.

Eli Fernandez, a volunteer from the Humanitarian Respite Center, gathers them under the branches of a large tree and speaks to them for a few minutes before arranging them in single-file and directing them into the large bus station.

While Fernandez works with people who have tickets leaving the station within hours, Luis Guerrero, rolling around on his motorized scooter, directs the rest of the group to some seats along the wall.

Guerrero is an ex-firefighter who lost one of his legs in the line of duty. He comes to the bus station almost every day because he wants to help these sojourners.

“One day I saw a nun in here having a problem and I asked if I could help,” he said. “She said yes. She left and I stayed,” he said, laughing.

He has devised his own way to help. Once the volunteers have helped people get their tickets, he takes them aside for a lesson about the “gray dog.”

“I tell them to look at their tickets then I say, ‘Do you see a dog anywhere else?’ They nod and point to all the signs with the dog. I tell them, follow the dog all to the way to your destination.”

He smiles, “No one has been lost yet.” 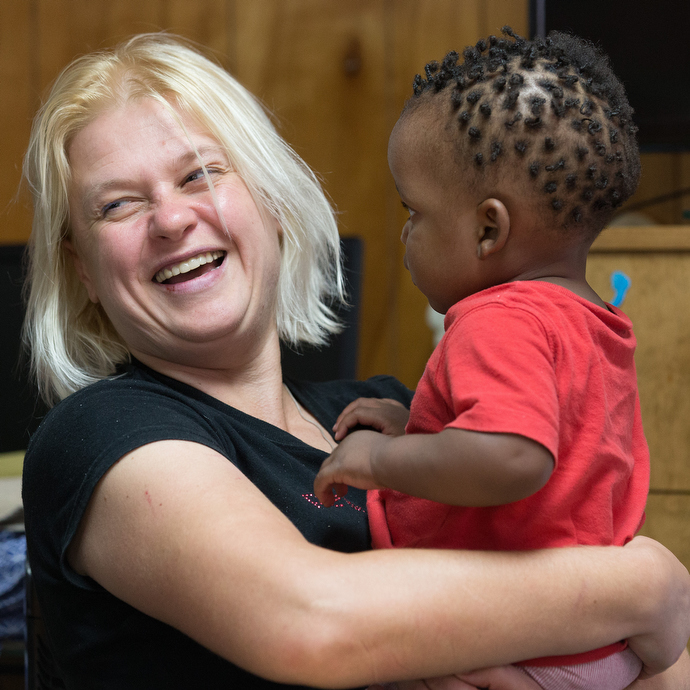 Julia, an immigrant from Ukraine, plays with Andonis, a baby from Congo at La Posada Providencia, an emergency shelter for immigrants and asylum seekers in San Benito, Texas.

Donate to district immigration response efforts by sending checks to:

The immigrants also get a large white envelope supplied by the Humanitarian Respite Center. On the front, in large letters, are the words: “Please help me. I do not speak English. What bus do I need to take? Thank you for your help.”

Clutching their envelopes, a group follows Blanca Muñoz, another respite center volunteer, to their next stop. Applause greets them.

“We applaud to let them know they are welcome,” Pimentel said.

Hellums said the stream of immigrants is part of everyday life for people living in McAllen and other towns and cities along the border. 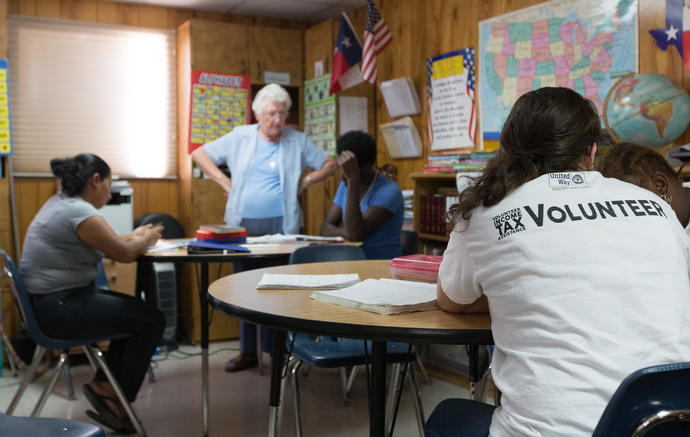 Andi Atkinson is executive director of La Posada Providencia, an emergency shelter for immigrants and asylum seekers. She is president of United Methodist Women in El Valle District of the Rio Texas Conference.


She first started working with immigrants in 2014 when there was a huge surge of unaccompanied minors reaching the border. She works with many of the non-profits serving immigrants.

Ann Cass, executive director of Proyecto Azteca, said the faith community is essential. Proyecto Azteca is a nonprofit self-help construction company which allows immigrants to purchase their own home.

“They put the face back on immigrants,” she said.

Andi Atkinson, executive director of La Posada Providencia, said all of the people in the emergency shelter for immigrants and asylum seekers have a story to tell.

“No one flees their homes unless bad things have happened to them,” she said. Atkinson, who is also president of United Methodist Women for El Valle District, said the shelter is tiny “but we make do.

“We pull out cots and mats and people sleep on the kitchen floor.” 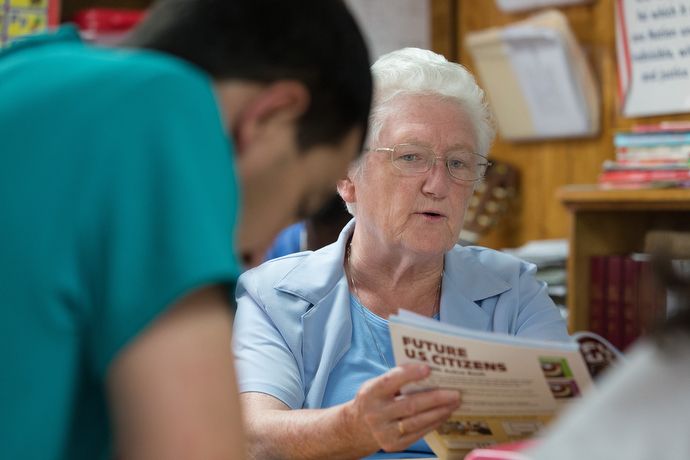 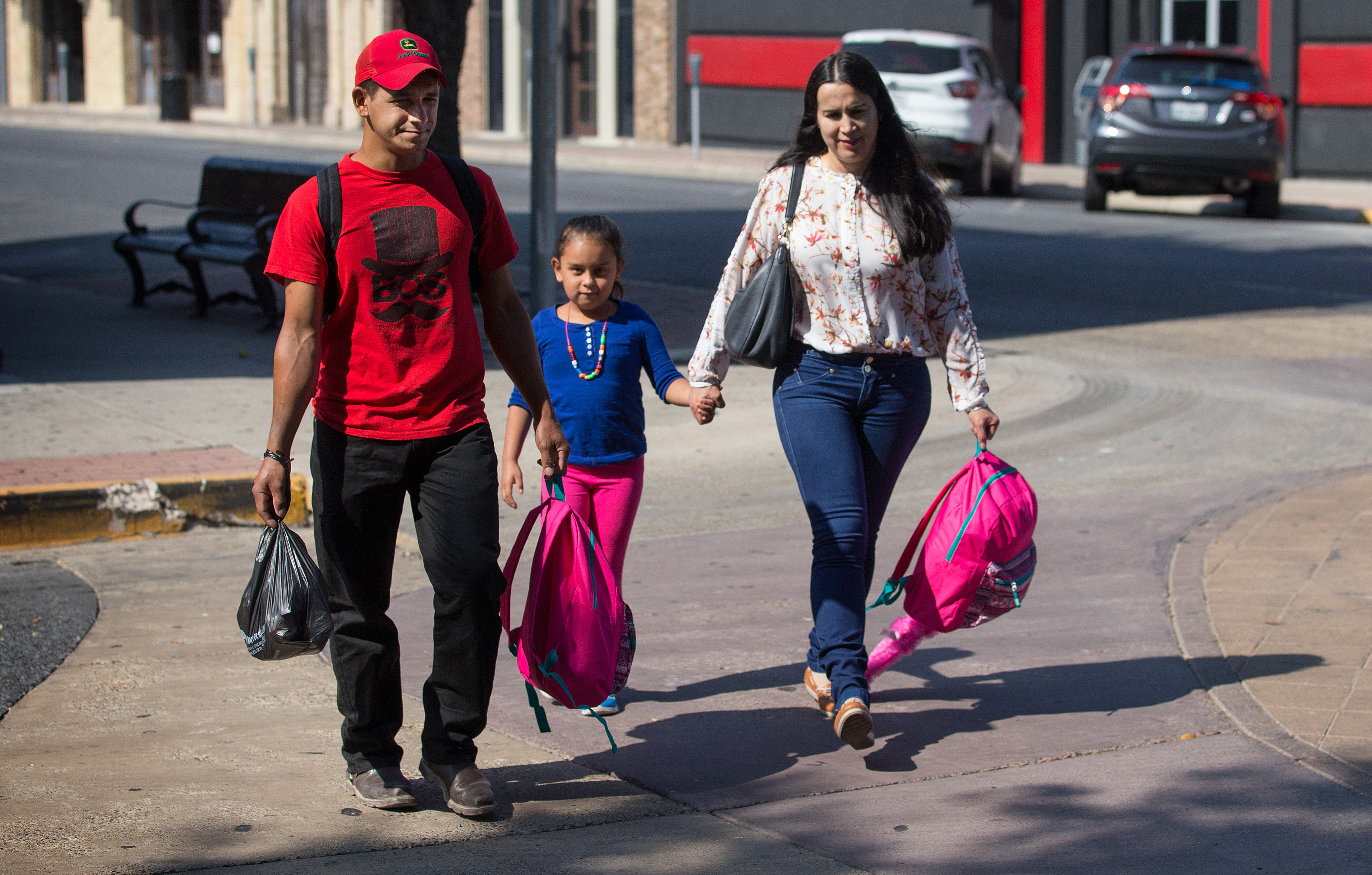 One of the current residents is Shalom (not her real name), an asylum seeker who fled Zimbabwe because of political oppression. She wrote a letter to La Posada Providencia and six other shelters while she was in prison in Dublin, Ireland.

“La Posada responded,” she said, smiling. “It was all by grace. I can see God working in my life.”

The recent news about families being separated has brought a lot of media attention. Political tweaks are going to happen, Pimental said.

Everyone who walks through the doors is a person in need, Hellums said.

“We just help them.”

Still, United Methodists cautioned that details of any policy shift are important and stressed that the executive order isn’t enough.