A cold November rain was falling as 1-year-old Kataleya pushed her tiny arms out of a tent and her plaintive crying pierced the gray afternoon.

Her father, Jesús, was just outside the tent. He reached down and wrapped her in his arms, pulling a small blanket around her shoulders.

Misery, desperation and love are languages that need no translation.

Members of the United Methodist Immigration Task Force — hailing from around the U.S. and Mexico — visited migrants living on a small street near the Paso del Norte International Bridge, which connects Juárez with El Paso. The visit was part of a three-day Immigration Summit held in El Paso, Texas; Las Cruces, New Mexico; and Juárez, Mexico.

The group walked to the bridge after leaving a nearby migration processing facility in Juárez. United Methodists volunteer their time at the center to feed and bring some relief to migrants suffering from the unrelenting waiting and worrying as they seek asylum. 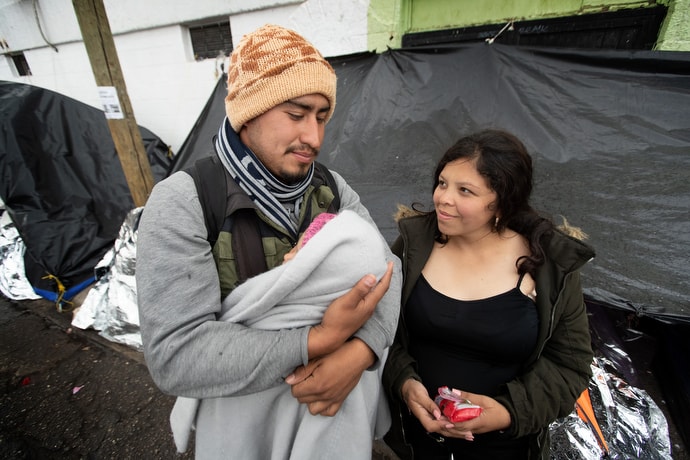 Jesús and his pregnant wife, Mariana, care for their 1-year-old daughter, Kataleya, at a tent camp in Juárez, Mexico, where they and dozens of other migrants are waiting for an appointment with U.S. immigration officials to request asylum in the U.S. The young family has been living in a two-person camping tent for two months. They are among some 16,000 asylum seekers who are stranded in Juárez following implementation of the Trump administration’s Migrant Protection Protocols, which force asylum seekers to stay in Mexico while they wait for their immigration proceedings.

Migrants arrive with very few possessions. They are not prepared for the long wait. Churches and other organizations supply them with tents. Silver Mylar blankets donated by a United Methodist church dotted the bleak scene. Migrants were using the blankets to add another layer of protection from the rain.

Like many others in this makeshift camp, Jesús and his family are fleeing organized crime in Mexican states like Michoacán, Guerrero and Zacatecas or countries like El Salvador, Honduras and Guatemala. They came here to seek asylum in the U.S. and have been on this street for two months. Jesús’ wife, Mariana, is pregnant.

Many migrants choose to live outside near the bridge, fearing that if they move they might lose their spot on the waiting list to interview with a border agent on the other side of the bridge. 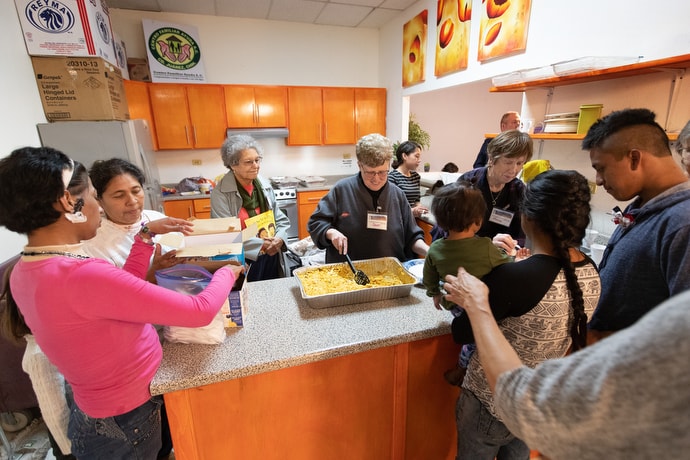 Volunteers from El Calvario United Methodist Church in Las Cruces, N.M., serve a meal for migrants at an immigrant processing center in Juárez, Mexico, at the foot of the Paso del Norte border crossing into El Paso, Texas. Volunteers from Mexico and the U.S. serve regular meals and offer educational programming for children while families wait to make asylum claims in the U.S.

Meeting Nov. 21-23, the Immigration Task Force heard from two congresswomen and church leaders involved in work with migrants. One of the key things they heard was the hardship brought by the Trump administration’s Migrant Protection Protocols policy, which is forcing migrants to remain in Mexico while waiting for asylum.

Triny Rivera, shelter manager of El Calvario United Methodist Church in Las Cruces, explains that people walk to the bridge every day hoping for their number to be called.

“They get sent back to wait,” she said.

Sometimes as many as 20 migrants are called, other times just one.

“We try to provide humanitarian service; we try to treat people the way we would want to be treated,” Rivera said. 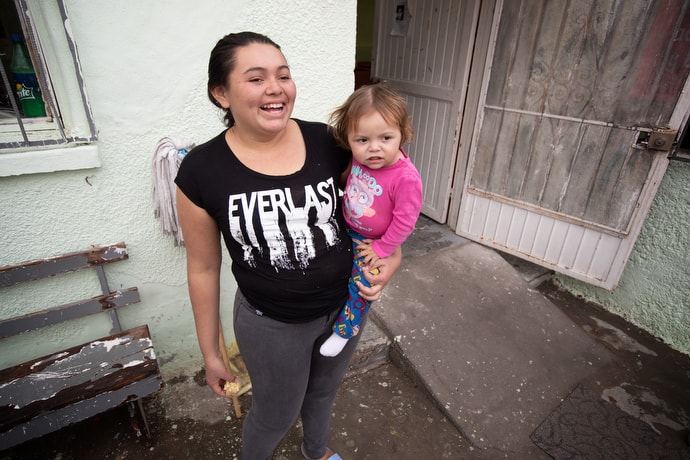 Isela Maria Fuentes and her 16-month-old daughter, Maria de los Angeles Fuentes Curado, have returned to El Buen Samaritano, a shelter for migrants run by the Methodist Church of Mexico in Juárez, after their initial interview with U.S. immigration authorities about their asylum claim. The U.S. Migrant Protection Protocols require that asylum seekers remain in Mexico while they wait for their immigration proceedings. The mother and child, who fled violence in El Salvador, have been living at the shelter for three months.

El Calvario brings a hot meal every Tuesday and holds a “little school” for the children. 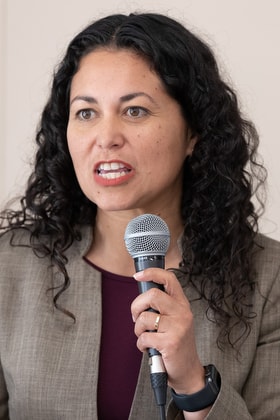 Cynta Torres, a member of the El Calvario team, is a retired teacher and her passion is teaching the children. Today she is trying to urge the people to come inside, but no one wants to join her.

“They are saying no, they are miserable and wet. They were miserable last night because it was pouring down rain. A lot of them are sleeping,” Torres said. “I thought I could bring books to them and they could have a special day of reading.”

Torres Small pointed out that she is the only member of the Homeland Security Committee who represents a district along the U.S./Mexico border. She has been critical of the Migrant Protection Protocols, saying that forcing people to wait in dangerous conditions only compounds the crisis.

“I’m so proud of the communities that have responded to that call to help serve their neighbors, but I’m so disappointed in our government that we haven’t been able to find a broader solution,” she said. 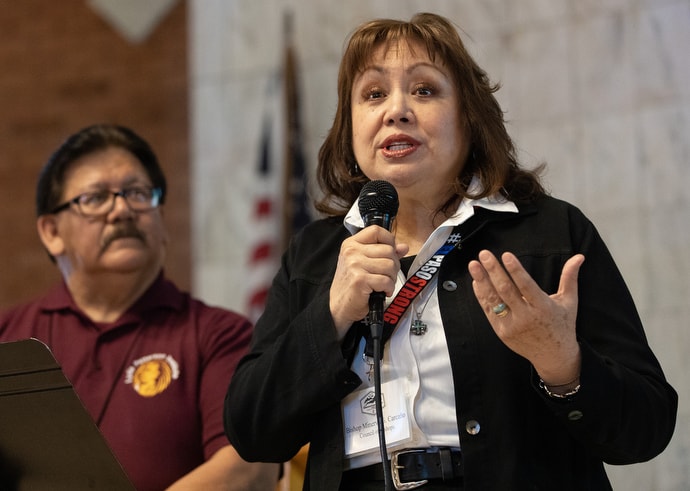 She urged the members of the task force to share the stories of what they had seen across the border. The church has a unique way to reach people by appealing to them from a sense of faith and service, she said.

Torres Small spoke about attending a hearing on the protocol policy and seeing both sides troubled by the harsh realities of asylum seekers.

“It was incredibly partisan, but I watched members on the other side of the aisle get visibly frustrated and sad about what was happening to people who were waiting in Mexico,” she said.

Most of the task force meeting was held at the Lydia Patterson Institute, a United Methodist college-preparatory school that has been in existence for more than 100 years. Patterson was a Methodist laywoman who noticed young Hispanic boys in the neighborhood had no school to attend. 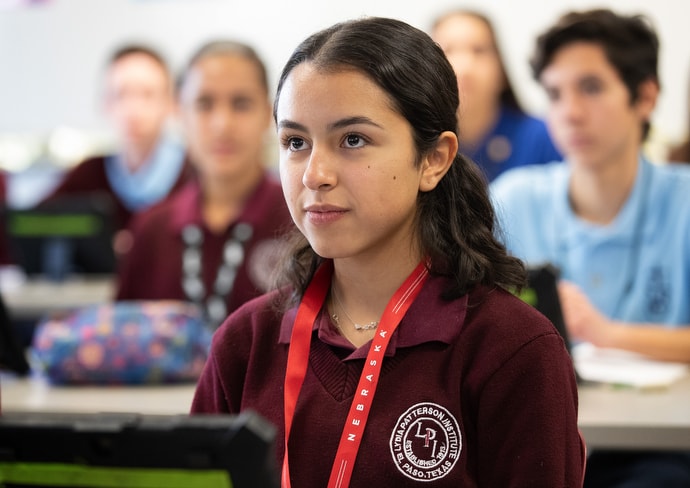 Paula Vizcarra listens to instructions from her algebra teacher at the Lydia Patterson Institute, a United Methodist college-preparatory school in El Paso, Texas. The school hosted members of the United Methodist Immigration Task Force for their summit meeting. 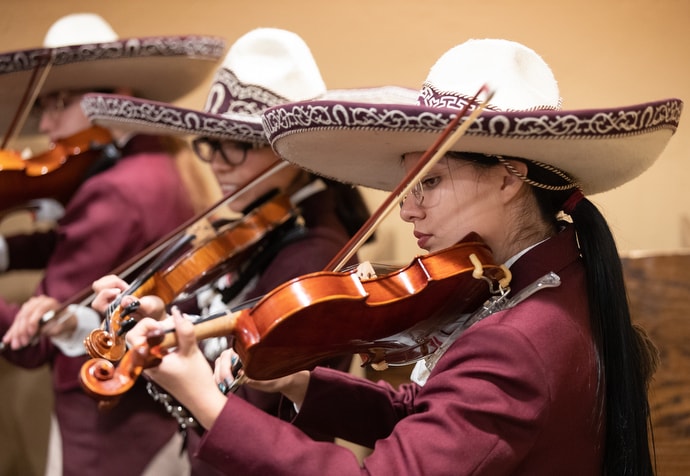 The Rev. Eduardo Rivera, superintendent of the El Paso District, New Mexico Conference, said the school is “great news of how two countries can make a difference and how a United Methodist institution is making an impact in the midst of our chaotic immigration issue.”

Most Lydia Patterson students live in Juárez, rising early and waiting up to two or three hours in line every morning to cross the border for school.

“Most schools don’t have what we have for these students,” said Ernesto Morales, principal. “Sometimes people will say, ‘Well that’s nice you are teaching them English.’ That’s the polar opposite of our frame of mind; ours is to give them a top-notch education.” 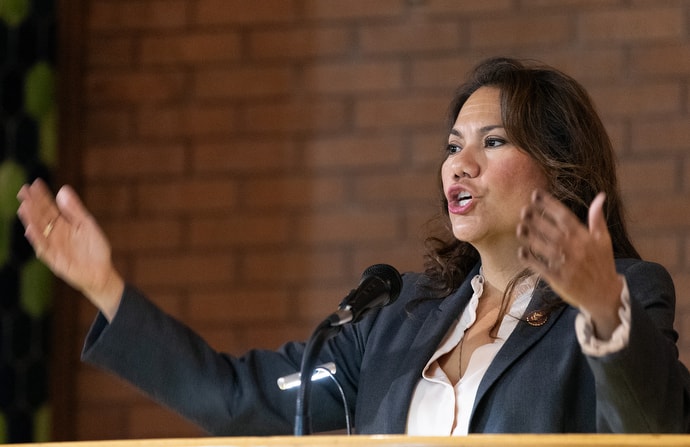 U.S. Rep. Veronica Escobar tells members of the United Methodist Immigration Task Force, meeting in El Paso, Texas, that U.S. immigration policies have brought the country to "one of the darkest points in American history for our generation." Escobar serves the 16th congressional district in Texas.

How the church responds

National Justice For Our Neighbors

“It is such a privilege and opportunity when we have visitors who really truly want to find out what is happening, see with their own eyes and bear witness to what the U.S. government is doing to immigrants and to safe, vibrant communities like mine. Go out and preach the word of truth to everyone around you,” she said.

Escobar said people fleeing persecution is nothing new, but the level of inhumanity being used against them is new.

“We are at one of the darkest points in American history for our generation,” she said, citing the separation of families — taking small children from their parents — and inflicting anguish on vulnerable populations.

“We will have to live knowing this period of American history was the harshest and cruelest for the most vulnerable.”

Escobar echoed Torres Small in urging the church to tell the immigrants’ stories.

“Our fundamental challenge as a country is that the vulnerable, especially migrants in the U.S., have been dehumanized. We all have to work to elevate their voices to spur compassion within the hearts of those whose hearts are hardened. Because if we aren’t there to show our humanity and our good will, then we’ve lost a very important part of our soul.” 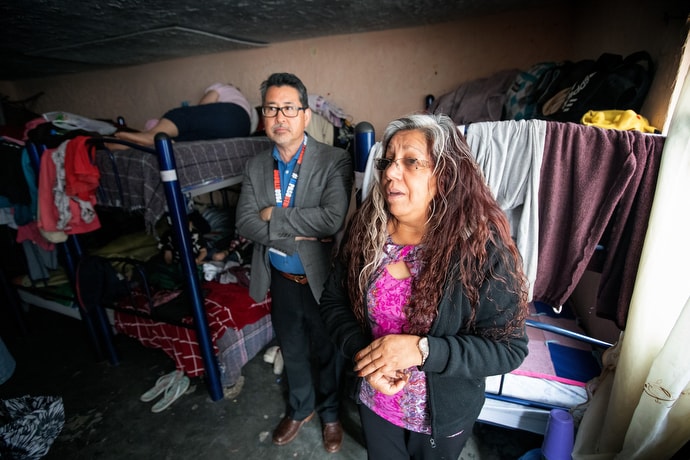 Dolores Fierro (right) offers a tour for members of the United Methodist Immigration Task Force of El Buen Samaritano, a shelter for migrants operated by the Methodist Church of Mexico in Juárez. At center is the Rev. John Oda, a member of the task force. 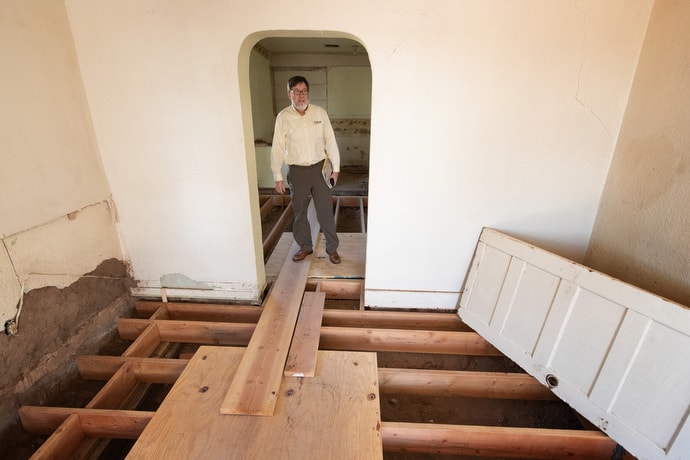 The Rev. Jack Amick of the United Methodist Committee on Relief checks on the progress of renovations at El Calvario United Methodist Church in Las Cruces, N.M. The relief agency is helping support a transitional shelter there for immigrants who have legal documentation that allows them to travel so they can address asylum proceedings in locations close to relatives living in the U.S. 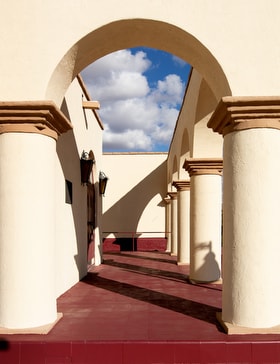 The Methodist Church of Mexico is heavily involved in working with migrants along the Mexico border. Task force members visited El Buen Samaritano, a shelter in Juárez supported by the church.

“God has brought an awakening in the matter of working for and with migrants,” said Bishop Felipe Ruiz Aguilar, Methodist Church of Mexico. “The Bible compels us … to love the children and women and the strangers and neighbors. Some of the prophets remind us to have special considerations to those who come as strangers. And Jesus puts the cherry on top to remind us of our responsibility.”

“Remain open to what God might do, God does things in a surprising way,” he said. 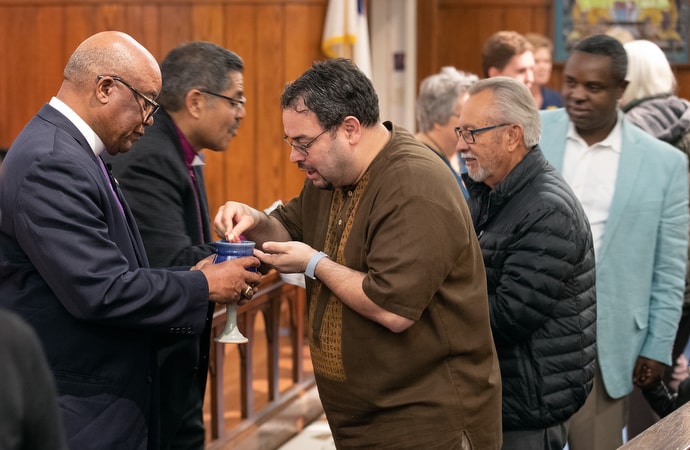 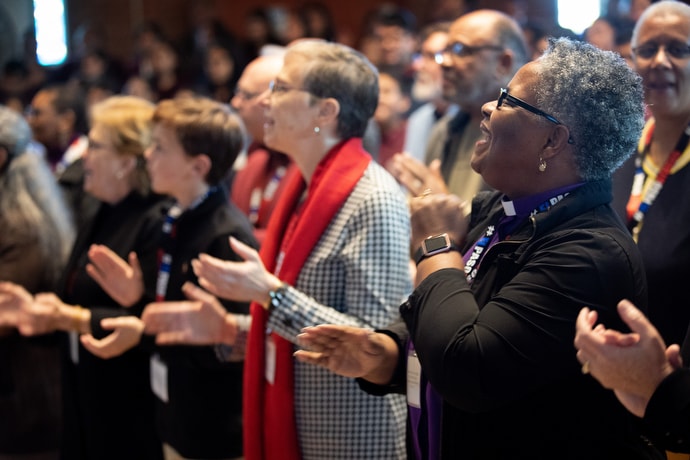 Bishop LaTrelle Easterling (right) sings alongside other members and guests of the United Methodist Immigration Task Force during worship service at the Lydia Patterson Institute in El Paso, Texas.

Bishop LaTrelle Easterling, Baltimore-Washington Area, said the need to migrate has been going on since the beginning of time but being an eyewitness to the suffering is heartbreaking.

“If there are two or three or four persons whose hearts are moved — even if their politics don’t change, if they say that’s not how human beings should live, those are the persons I want to work with to effect change.” 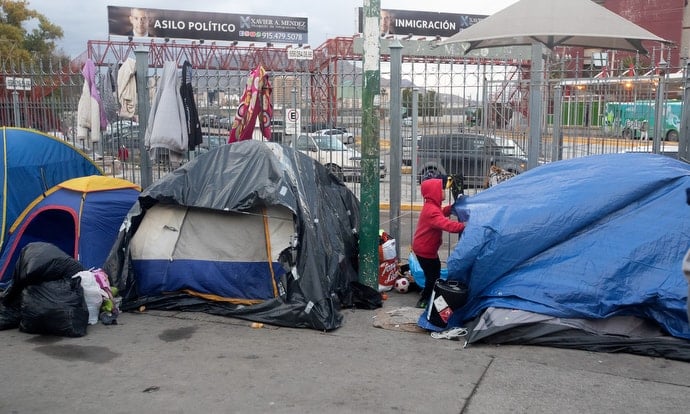 A young boy arranges a tarp to protect his family's tent from rain at a makeshift encampment in Juárez, Mexico, for people waiting to make asylum claims in the U.S.

View all stories from our series, Ministry with Migrants.

Gilbert is a news writer and DuBose a photographer for United Methodist News Service. Contact her at (615) 742-5470 or [email protected]. To read more United Methodist news, subscribe to the free Daily or Weekly Digests.

United Methodists in and near Ukraine help refugees

Congregation changes from being a traditional church to a ministry center and opens its doors wide to those in need.
Social Concerns

As the U.S. Interior Department investigates the Indian boarding schools that took young Native Americans from their families and tried to expunge their culture from them, United Methodists address the church’s role and their hopes for the future.