Much is in flux in The United Methodist Church as 2022 draws to a close. What’s clear is that the denomination’s long, gradual numerical decline in the U.S. has accelerated due to local church disaffiliations.

Yet even as they mourn these departures, a number of United Methodists also see signs of hope and opportunities for growth in what is still the second-largest Protestant denomination in the U.S. and a global church with members spread across four continents.

Just as fire tempers steel, Council of Bishops President Thomas J. Bickerton said he sees the current struggles refining The United Methodist Church to be stronger in faith and sharper in mission and ministry.

“Are we going to be less than we were before? Yes,” said Bickerton, who also leads the New York Conference. “But that’s not a bad thing. I believe we are beginning to discover what it means to reframe and reset this denomination.”

No question the denomination is already undergoing significant change. As other Protestant denominations in the U.S. have done previously, The United Methodist Church is experiencing its own separation after decades of internal division about the role of LGBTQ people in church life. 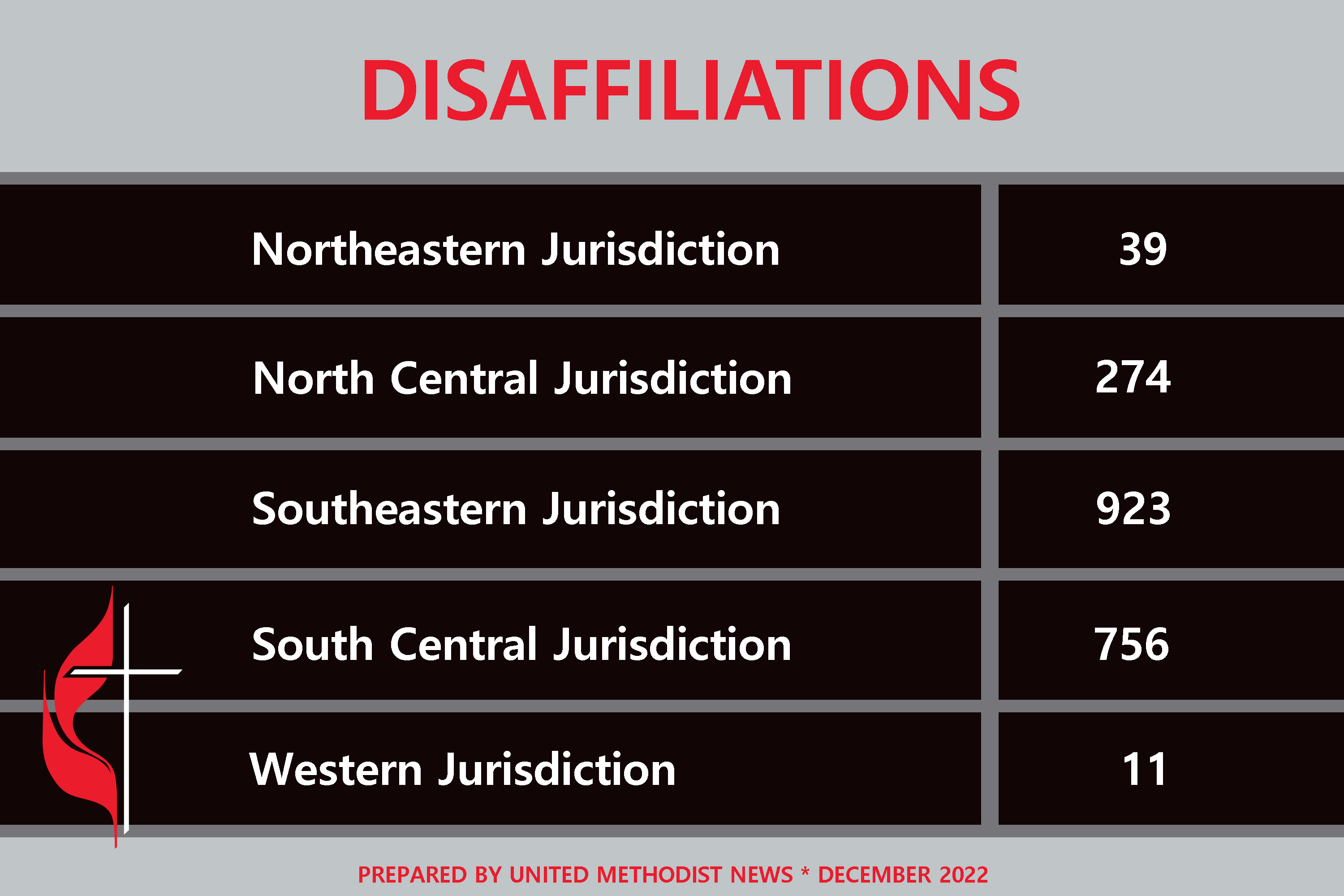 The chart shows by jurisdiction UM News’ count of how many local church disaffiliations have received annual conference approval since 2019 when the Book of Discipline’s disaffiliation provision came into effect. It does not show the number of churches that have closed because they were no longer sustainable or any churches currently involved in legal action related to disaffiliation.

So far, a UM News review has found that 2,003 churches in the U.S. have cleared the necessary hurdles under church law to leave the denomination with property.

That translates to about 6.6% of U.S. congregations withdrawing since 2019 when the church’s disaffiliation provision took effect. Many of the congregations that have left are small, but the denomination also has seen the departure of some megachurches. The withdrawals still leave more than 28,500 United Methodist congregations in the U.S.

Suffice to say, the vast majority of congregations are sticking with The United Methodist Church at this point.

As for the disaffiliations, it’s not yet known how much membership loss they represent. That’s in part because some members of exiting congregations are opting to remain United Methodist by transferring to other churches or, in some cases, planting new United Methodist faith communities.

Pat Luna, a lifelong United Methodist and a leader in grassroots efforts to persuade people to stay, said she is already seeing a more committed laity eager to share why they want to be United Methodist.

“We’re going to see some losses, and in some places significant losses,” Luna said. “But there’s new, exciting efforts popping up everywhere to create churches centered on being disciples of Jesus Christ for the transformation of the world.”

The people called Methodist have been through breakups before.

“It’s one of those things that have been characteristically Methodist,” said the Rev. Russell Richey, noted historian of Methodism and consulting faculty member at Duke Divinity School. “We’ve found a need from time to time to distance ourselves from one another.”

The most notable instance came in 1844 when Northern and Southern Methodists divided into different denominations over the question of whether a bishop could own slaves. Many historians cite it and other big denominational divides around the same time as signs that the U.S. was heading to civil war.

The Rev. Lovett H. Weems, an emeritus church leadership professor and longtime observer of the church’s shrinking numbers in the U.S., said the current splintering is nowhere near that scale.

“The 1844 division over slavery has been the playbook for separatists,” he said. “By that standard, this movement is a poor imitation, though equally misbegotten.”

One thing is certain: The rising tide of disaffiliations has at least another year to go. 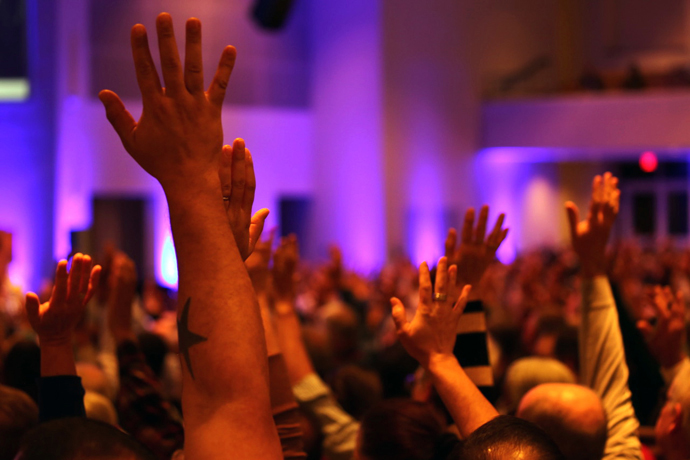 The same legislative assembly approved a new church law — the Book of Discipline’s Paragraph 2553 — that offers a pathway for churches to leave with property. The provision is set to expire at the end of 2023.

The special General Conference did not end the rancor. In early 2020, a diverse group of church leaders unveiled a proposal for amicable separation that would have theological conservatives who support the LGBTQ restrictions leaving with church property and funds to start their own denomination. But COVID-caused delays of General Conference from 2020 to now 2024 have kept the plan from being considered and kept the current bans in the Discipline.

Read Conferences reach out to those grieving disaffiliation.

In the meantime, organizers launched the breakaway theologically conservative Global Methodist Church in May. Backers of the new denomination have been recruiting United Methodist churches to join since then.

That has left many traditionalist churches turning to Paragraph 2553 to exit. The provision has a number of requirements including at least a two-thirds vote for disaffiliation by the congregation and majority approval by its annual conference — a regional body with voting members from multiple congregations.

An exiting church also must pay a fair share of its annual conference’s pension liability as well as two years of apportionments — shares of church giving that support ministry beyond the local church. Paragraph 2553 also allows for conferences to add requirements.

Still, most conferences seek to do what they can to accommodate church exits. Since late summer, 17 annual conferences have held special sessions to vote on church departures and more have scheduled special sessions next year. So far, most have approved all the disaffiliations on the agenda.

The one exception was the Arkansas Conference, where a majority of conference voters approved 35 churches for disaffiliation but blocked three others. The Arkansas Democrat-Gazette reports that the pastor, lay leaders and many of the members of one denied congregation — Cabot United Methodist Church — have since decided to walk away and start a new church.

The number of disaffiliations has varied greatly by region, with conferences in the southern U.S. so far seeing the most church departures. Perhaps not surprising in a denomination whose history so closely aligns with that of the United States, the disaffiliation map is similar to the red-and-blue maps on Election Day — with the more conservative red areas seeing more church disaffiliations compared to the more progressive blue areas.

The Texas Conference, stretching from the Houston area to the eastern part of the state, on Dec. 4 approved the highest number of disaffiliations — 294, or nearly half of its 598 churches.

The Northwest Texas Conference, voting on the same day, ratified the highest percentage of disaffiliations — 74%, or 145 of its 196 churches. Only 51 congregations remain and some are in discernment to potentially leave later. Campus ministries in the conference, which covers the Texas Panhandle including Texas Tech University, also have disaffiliated.

“We are confident that folks are not going to have to drive an hour to get to United Methodist worship,” he said. “That’s our goal. We don’t have it all mapped out yet, but we’re confident that’s easily manageable.”

The Texas Conference also has new faith communities beginning in areas where the United Methodist presence is suddenly diminished or nonexistent. 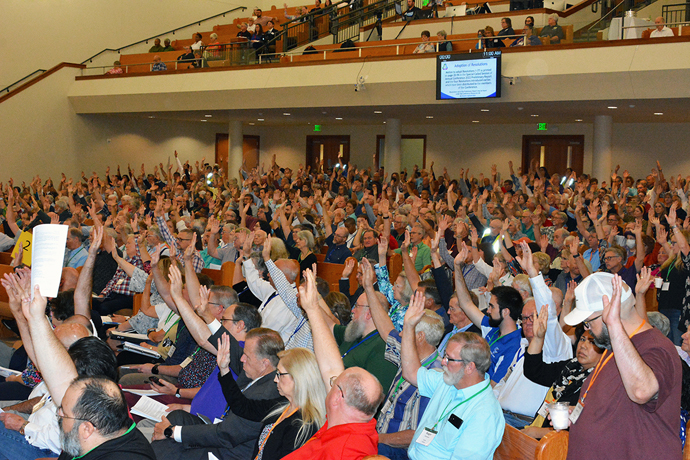 In the meantime, the departures clearly have financial implications. The board of the General Council on Finance and Administration, the denomination’s finance agency, has already started work on what will be the denomination’s lowest budget sent to General Conference in nearly 40 years.

Christine Dodson, the board’s vice president and treasurer for the North Carolina Conference, also is dealing with budget adjustments closer to home.

The North Carolina Conference on Nov. 19 approved 249 disaffiliations, representing 32% of the conference’s congregations and around 22% of its membership.

“The conference leadership is keenly aware of this process’ impact on churches, with some members choosing to leave even if the church does not,” she said. “At the same time, some churches are reporting bringing in new members who are excited about the direction of the church in their area. Discussions of budgets and conference apportionments include these multifaceted concerns and opportunities.”

But even amid these new realities, Dodson can testify to how the denomination can still swiftly and effectively address ministry needs. When an intentional act of vandalism left more than 40,000 people without power in North Carolina, the conference’s disaster ministries immediately jumped in to provide generators and solar-powered disaster response trailers where people could plug in.

“The team was ready and deployed quickly to help alleviate suffering and show the goodness and love of Jesus Christ to those impacted,” Dodson said. “This type of response is available through our shared connectional ministries and is a never-ending example of how we reach more people through our connectional relationships.”

Not all departing churches are opting to go with the Global Methodist Church. Some are going independent or joining another denomination in the Methodist movement.

In a Thanksgiving Day message, the Rev. Keith Boyette — transitional connectional officer for the Global Methodist Church — wrote: “Hundreds of churches have already joined and hundreds more are in the pipeline to join the GM Church before the end of the year.”

Much smaller numbers of disaffiliating churches have joined the long-established Free Methodist Church USA or become part of a new group called The Foundry Network.

One of the largest United Methodist congregations, White’s Chapel in Southlake, Texas, near Fort Worth, recently voted to disaffiliate and announced plans to create a cooperative of “like-minded, common-hearted congregations and ministries” called the Methodist Collegiate Church. White’s Chapel still must be approved for disaffiliation by the Central Texas Conference.

The 3,500-member First United Methodist Church in Pensacola, Florida, is an example of a church that plans to stay. The congregation, which is the mother church of Methodism in Florida and recently celebrated its bicentennial, has weathered denominational divisions before.

The Rev. Geoffrey Lentz, the church’s senior pastor, said the congregation has discussed disaffiliation a bit. Some of its neighbors in the Alabama-West Florida Conference are leaving. Still, no one thinks the "big-tent" Pensacola congregation has the two-thirds support necessary to withdraw.

“We are having a different conversation,” said Lentz, who also is chairing the Alabama-West Florida Conference's new task force on church planting and revitalization. “Our theme is ‘Practice Resurrection.’ Our church is experiencing new growth during this season, and we believe that we’re called to get back to this kind of Easter work. Our congregation is praying for and working toward revival and renewal in the UMC.”

Hahn is assistant news editor for UM News, Hodges is a UM News reporter in Dallas. Contact them at (615) 742-5470 or [email protected]. To read more United Methodist news, subscribe to the free Daily or Weekly Digests.