Neil Sedaka summed it up best: Breaking up is hard to do.

For congregations that want to leave The United Methodist Church, a breakup also could get very expensive.

Delegates to the special General Conference in February approved two measures that enable churches to exit based on disagreements related to the status of LGBTQ people in the church.

The disaffiliation plan in effect is a way to release the denomination’s centuries-old U.S. trust clause under limited conditions. For the first time in its history, the denomination has set procedures for U.S. congregations to withdraw from the denomination and take their buildings and other assets with them.

Before a departure, those congregations could be on the hook for anywhere from tens of thousands to more than a million dollars.

Annual conferences — church regional bodies — have the final word on what their churches owe. As U.S. annual conferences meet this year, some already are reckoning with how to calculate those costs.

Hayman is the chancellor for the North Carolina Conference. Previously, he said, his conference would close a church and sell its property if a congregation lost too many members to be viable.

The new rules change the dynamic, but conferences still need to account for the financial impact of a church’s departure.

For an exiting church, the biggest cost will likely come from what their conference determines is a fair share of unfunded clergy pension liability — that is, what conferences will owe retirees.

A church’s pension contribution not only supports the church’s current pastor but those who previously served the congregation, said Andrew Hendren, general counsel for Wespath Benefits and Investments.

Wespath manages investments for pensions and other retirement-plan assets on behalf of conferences. Conferences are pension plan sponsors and legally responsible for paying benefits.

“Every local church in an annual conference has in some way benefited from the promises that these pension programs represent,” Hendren said.

Delegates at the special General Conference made dealing with the future of U.S. clergy pensions their top priority even before passing the Traditional Plan that strengthens bans against same-sex weddings and “self-avowed practicing” gay clergy.

They later passed legislation that permits disaffiliation by Dec. 31, 2023, “for reasons of conscience” related to homosexuality. The disaffiliation legislation is now the new Paragraph 2553 in the Book of Discipline, the denomination’s policy book.

In upholding the legislation, the Judicial Council — the denomination’s top court — spelled out that any disaffiliation must include:

• Approval for disaffiliation by at least a two-thirds majority of a church’s professing members present at the vote.

• Establishment of terms and conditions between the exiting local church and the conference board of trustees.

• Ratification of a church’s disaffiliation by a simple majority at annual conference.

Exiting churches also must satisfy any loans from the conference and pay for transferring the building title or other legal work. They additionally must pay two years of apportionments — the amount conferences apportion to their churches to support regional, national and international ministries.

Still, pensions are where the dollars can add up because conferences have substantial obligations for increasingly long-lived clergy in an uncertain stock market.

The South Georgia Conference acknowledged this challenge at its June 2-5 meeting when its members approved its own pension and disaffiliation policies meant to augment what General Conference passed.

The Rev. Derek McAleer, the conference’s treasurer and benefits officer, told those gathered that the conference has to make sure it can pay the promises it has already made.

“The amount of money is so huge that everybody has to stop and take a deep breath,” he said. “We’re talking about 586 churches and $30 million bucks. There is no way to divide $30 million into 586 and get a small number.” 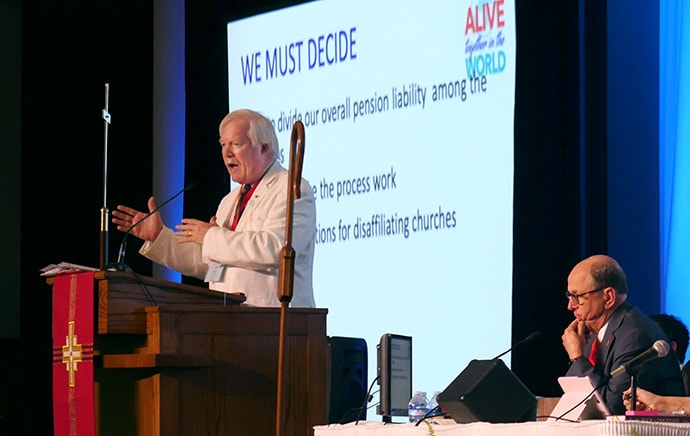 The Rev. Derek McAleer, South Georgia Conference treasurer and benefits officer, explains proposed annual conference policies on pensions and disaffiliation that augment what General Conference 2019 passed. He spoke during the 2019 South Georgia Annual Conference meeting in Columbus, Ga. Sitting beside him is Bishop R. Lawson Bryan. Photo by Heather Hahn, UM News.
The South Georgia policy includes a formula based on what churches pay in salary and housing for clergy members — using seven years between 1990 and 2019 to represent the pension liability over a span of pastors.

The resolution urges conferences to follow the Golden Rule “in all matters related to disaffiliation and allocation of unfunded pension liabilities” regardless of a departing church’s stance on human sexuality. The resolution also calls on Wespath to provide current information on unfunded liability no later than Oct. 1.

That’s something Wespath essentially already does, Hendren said. Each fall, the pension agency provides each U.S. conference with a report on its pension valuation, the basis for long-term contributions, and the market valuation that would be required if church plans were subject to the federal pension law, Employee Retirement Income Security Act. The report also includes an appendix that lists the liabilities of other U.S. conferences.

Hendren said that a commercial annuity provider would charge about 110% of the market value of liabilities to account for the increased assumption of risk, such as increasing lifespans. Basically, it’s the cost of paying out all benefits immediately plus a premium to cover risks such as market downturns and longer years in retirement.

Wespath has a process for a conference chancellor, treasurer or benefits officer to request, at any time, this valuation for the whole conference.

However, Hendren said, the valuation is only good for three months. “After that, we suggest a conference request a new one from us because the assets in the plan may have changed with market fluctuations, and sometimes the plan liabilities may have changed based on interest-rate movements,” he said.

Generally speaking, the larger a church and more pastors on staff, the larger its pension obligations are likely to be.

It will take time to deal with the full ramifications of the new legislation, said Hayman.

“The chancellors I know are all working with their bishops, boards of trustees, treasurers and other conference officers to try to determine the best path forward, to interpret the legislation and to move on with this with all deliberate speed,” he said.

But he added, “Nothing happens quickly in The United Methodist Church.”