The Rev. Charles Anderson doesn’t like the term “orphans” for those who want to stay United Methodist after their local church has voted to disaffiliate.

“These are not orphans; these are pilgrims,” Anderson said. “They’re going to go somewhere, somehow.”

Anderson is superintendent of the Texas Conference’s Northwest District, where nearly 60% of the 91 churches have been approved for disaffiliation.

He’s dealing with a lot of pilgrims, and to help them, he created the Oasis Network. It’s aimed at supporting such people until they are settled in another United Methodist church.

“To me, the most biblically inviting and nonjudgmental image is of an oasis,” Anderson said. “It may not be where you stay, but you know you’re going to rest there for a while.” 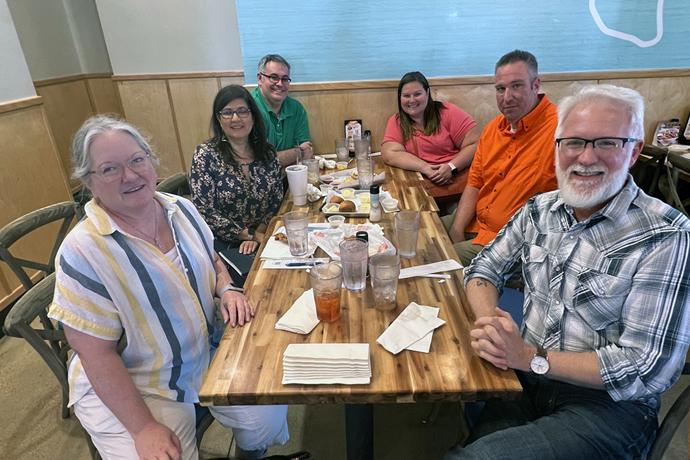 Some pastors in the Texas Conference’s Northwest District are working through the newly created Oasis Network to support those who want to stay United Methodist though their church has chosen to disaffiliate. Helping with the effort are (from left to right) the Revs. Susan Smith, Ingrid Beguiristain, Adam Muckelroy, Kimberly Carney, T.J. Gabelman and Jimmy Calvert. Photo by the Rev. Charles Anderson.

The phenomenon of people leaving their local church to remain United Methodist has the Texas Conference and other conferences scrambling to walk alongside them and offer help. The Oasis Network is one of a handful of innovative efforts.

They come at a tender time, given the emotions that accompany leaving one’s church.

“We’re all going through a process of grief or loss,” said Gene Bruce, who was a longtime active member of First United Methodist Church in Conroe, Texas, but recently moved to another United Methodist congregation after First Conroe’s vote to disaffiliate.

Decades of internal division over how accepting to be of homosexuality led to the 2019 special General Conference, which ultimately strengthened bans on same-sex weddings and the ordination of “self-avowed practicing” gay clergy.

That same legislative assembly approved allowing U.S. churches a time-limited opportunity to leave the denomination with their property, provided they have a two-thirds vote by members and meet certain financial and procedural requirements.

So far, more than 2,000 churches have chosen to disaffiliate under that Book of Discipline provision, Paragraph 2553, which expires at the end of 2023. The Texas Conference alone saw 294 churches approved for departure at a recent special session. 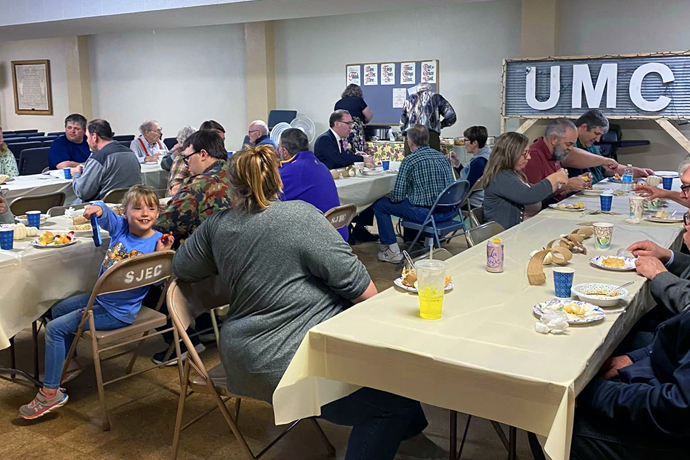 In that conference’s Northwest District, Anderson pulled together the Oasis Network with the help of a handful of pastors who are committed to The United Methodist Church.

They’re dealing with the new reality of United Methodist deserts in their district.

“We’re talking about areas where there’s little to no coverage or where the population would be significantly underserved by larger than usual numbers of churches taking different paths,” Anderson said.

In a kind of search-and-rescue effort, the Oasis Network is working with both disaffiliating and remaining churches, identifying people in the former who want to stay United Methodist and helping them find another United Methodist church, if they’re ready.

The network also is offering pastoral care to United Methodists who need a while to make such a decision or who are suddenly a daunting distance from a United Methodist church.

“It’s hard on a lot of them,” said the Rev. Susan Smith, pastor of First United Methodist Church of Grand Saline, Texas, and a member of the network team. “They’ve been active in their churches. Now they’re going to be 30 minutes away.”

In the Central Texas Conference, the Rev. Will Cotton has gratefully adopted the Oasis name and idea. He’s planning Oasis Fellowships that will consist of remnant United Methodist congregations meeting in homes and getting communion and other pastoral care from volunteer clergy.

Four “connecting churches,” including First United Methodist Church of Fort Worth, are on board to provide streaming worship services and training for leaders of the home gatherings.

One Oasis Fellowship is up and going, in the Eastland and Cisco area west of Fort Worth.

“They came to us and said, ‘Hey, we’re ready to do this,’” said Cotton, executive director of the Central Texas Conference’s Lamar E. Smith Center for Evangelism, Mission and Church Growth. 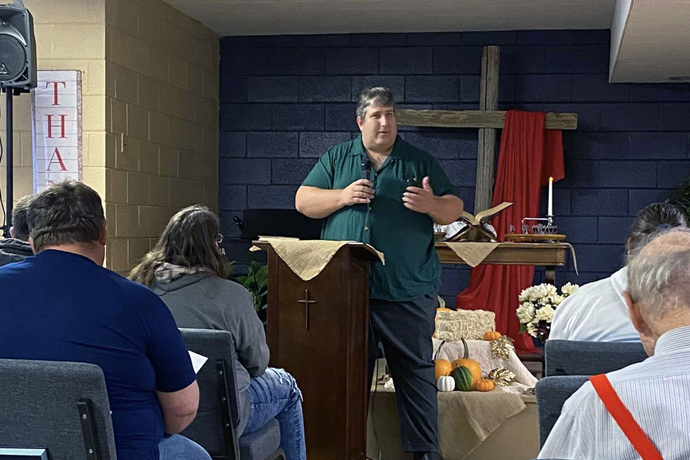 The group has met Sundays since early November, watching the worship service of First United Methodist of Fort Worth and discussing the sermon afterward.

The Arkansas Conference has seen its share of disaffiliations, some highly contentious. The conference also has had an apparent first: the assignment of a pastor to a cabinet-level position focused on helping in the aftermath of church departures. 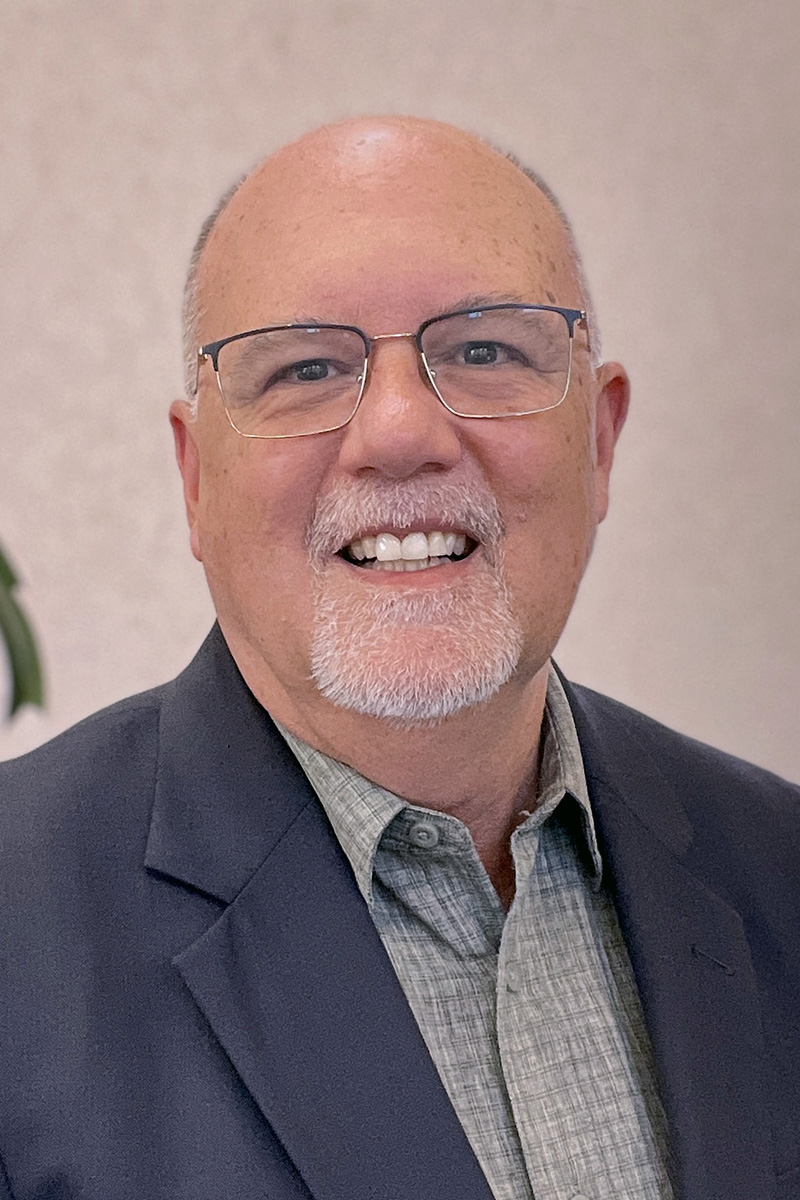 The Rev. Michael Roberts is appointed to work with those in the Arkansas Conference who want to remain United Methodist though their local church has chosen to disaffiliate. Photo courtesy of Michael Roberts.

Bishop Gary Mueller appointed that pastor, the Rev. Michael Roberts, to direct what the conference is calling the Arkansas ReStart Initiative.

“My job is to provide support and help for next step discernment for those who want to stay United Methodist and are affected by disaffiliation,” Roberts told UM News.

That means offering pastoral care, helping people connect with another United Methodist congregation, organizing new worship communities and figuring out other ways to be of service.

“We’re making it up as we go along,” Roberts said.

The Rev. Tim Catlett said the initiative is about, first, listening — and then trying to find creative ways to offer post-disaffiliation support. So far, the listening has yielded a common sentiment.

“Many folks said they felt abandoned by their church and were looking for ways to stay connected,” said Catlett, the conference’s executive director for new faith communities.

Already some 360 people have asked to move their membership to the collective, Catlett said.

The collective’s website offers a range of resources, including online United Methodist worship. The effort also includes a Facebook group where United Methodists in disaffiliating churches can offer one another support.

The Rev. Laura Wittman is leading a group of pastors working with the collective, and she said it’s about providing hope for United Methodists who feel they’ve lost their local church.

The Florida Conference and Western North Carolina Conference — both overseen by Bishop Kenneth Carter — moved early to create UMsConnected, an online hub or “metaverse movement” for United Methodists from churches that voted to depart.

Resources include the website, a Facebook page, a podcast and Zoom gatherings. Young adults are invited to participate in “Kindred,” an online spiritual formation ministry.

“We’re just one little planet in the universe of planets that are helping people make it through this tough time,” said the Rev. Steve Harper, a retired Florida Conference pastor who is co-directing the effort with the Rev. Kim Ingram of the Western North Carolina Conference.

That there’s life after disaffiliation can be verified in Dickinson, North Dakota.

There, the Dakotas Conference has supported a group of United Methodists who were on the losing end of a close disaffiliation vote by their church, Prairie Winds United Methodist, in March 2021.

Those who did not want to disaffiliate met with conference leaders, took some time to grieve, then began to worship together. Since September 2021, they’ve missed only one Sunday and that was due to a blizzard, said Karl Rockeman, co-leader of the group.

On Oct. 30 of this year, the Rev. Joel Winckler, Northwest District superintendent of the Dakotas Conference, presided at a charge conference of what’s now known as Dickinson United Methodist Church. A vote was taken to continue with the chartering process, meaning the church is on the path to becoming self-sufficient within the structure of United Methodism.

“Amazing good has come from a tough loss,” Rockeman said.

As charge conferences go, this one was celebratory, including a cake with icing in the shape of the United Methodist Cross and Flame.

Rep. Delia Ramírez Hernández (D-Ill.) was sworn into the 118th U.S. Congress on Jan. 7. She grew up attending Humboldt Park United Methodist Church in Chicago and has been a leader in the denomination.
Mission and Ministry

During the past 27 years, Reidland United Methodist Men and multi-denominational partners have built more than eight miles of handicap ramp. This month, the men’s ministry is on schedule to build its 1,000th ramp. The Tennessee-Western Kentucky Conference has the story.
Annual Conferences