Beneath the Arch that symbolizes the U.S. Gateway to the West, more than 820 General Conference delegates worked to open a gateway in the denomination’s longtime homosexuality debate.

But after four days of prayers, speeches, protests and votes, it remains to be seen whether The United Methodist Church has found a way forward or remains stuck.

“It was our aspiration that we would find a way forward beyond our impasse. That was to try to really listen to people and listen to their values and understand them as people, rather than issues,” Bishop Kenneth H. Carter, president of the Council of Bishops, said in a press conference after General Conference adjourned.

“I will simply say we have work to do. We did not accomplish that.”

The Rev. Timothy McClendon of South Carolina leads delegates in prayer before a Feb. 26 vote approving the Traditional Plan, which maintains The United Methodist Church’s policies about homosexuality and strengthens enforcement. The vote came on the last day of the special General Conference in St. Louis. Photo by Paul Jeffrey, UMNS.

Still uncertain is how much of the legislation will take effect — or whether it will change the dynamic in places where a number of United Methodists, including entire annual conferences, openly defy these rules.

Late afternoon Feb. 26, delegates requested a declaratory decision by the Judicial Council on the constitutionality of the Traditional Plan.

The denomination’s top court will address the request at its next scheduled meeting April 23-25 in Evanston, Illinois.

The Rev. Gary Graves, secretary of General Conference, said any piece of legislation that the Judicial Council declares unconstitutional would not be included in the Book of Discipline, the denomination’s policy book.

The April meeting will be the Judicial Council’s third review of the legislation to see if it is in line with the denomination’s constitution.

After some amendments to the plan, the General Conference on Feb. 25 asked the Judicial Council to rev­­iew the legislation again. Early on Feb. 26, delegates learned the court — citing the same constitutional issues as before — ruled seven of the petitions unconstitutional and identified an unconstitutional sentence in another.

In the afternoon, plan supporters amended some of the legislation again but didn’t address all the previously identified constitutional issues.

The final Traditional Plan legislative package did not include two petitions because they had not been moved forward by the Standing Committee on Central Conference Matters, the first stop for legislation that affects church regions in Africa, Europe and the Philippines.

One of the petitions not included in the final package could have been far-reaching, requiring annual conferences to certify they would uphold the marriage and ordination prohibitions or leave the denomination.

A similar petition in the Modified Traditional Plan, meant to augment the Traditional Plan, also died in the standing committee. The Judicial Council also had previously found some constitutional problems in text shared by both petitions.

The Judicial Council ruled unconstitutional the second petition in the Modified Traditional Plan, which would have created a Global Episcopacy Committee to hold bishops accountable.

The parts of the Traditional Plan that the Judicial Council has held constitutional include an augmented definition of “self-avowed practicing homosexual,” to say it includes people “living in a same-sex marriage, domestic partnership or civil union or is a person who publicly states she or he is a practicing homosexual.”

Also previously held constitutional is legislation that sets a minimum penalty for clergy performing a same-sex wedding of one year’s suspension without pay for the first offense and loss of credentials for the second. 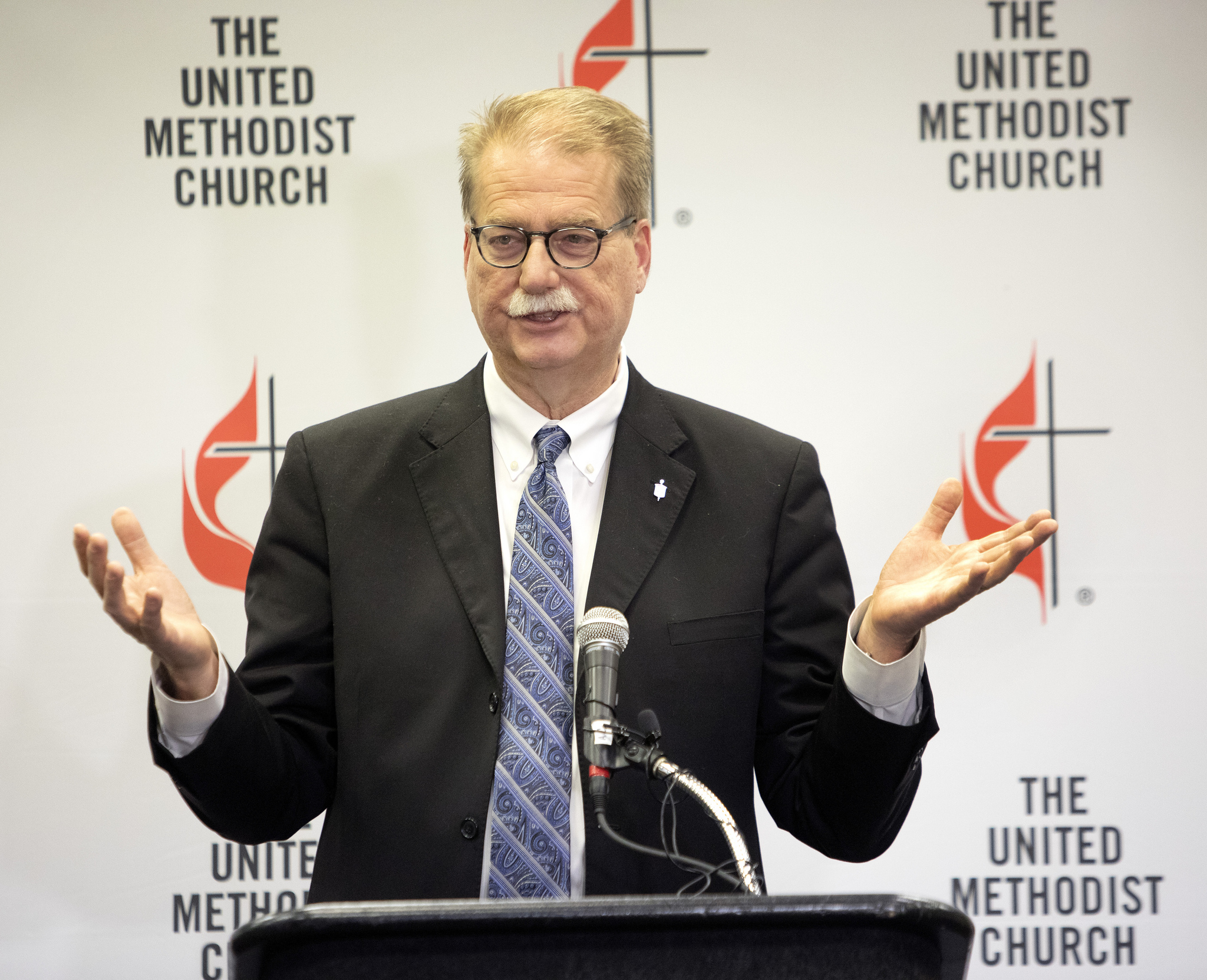 Bishop Kenneth H. Carter, president of the Council of Bishops, speaks to the press following the conclusion of the 2019 United Methodist General Conference in St. Louis. Photo by Kathleen Barry, UMNS.

The Judicial Council will consider what in the plan can take effect when it meets this spring.

Regardless of what the Judicial Council does, no one left General Conference feeling happy with what happened.

The Rev. Wellington Chiomadzi, a Zimbabwean student at Garrett-Evangelical Theological Seminary in Evanston, Illinois, worried after the plan passed what the vote would mean for relationships across the international church.

Voting is by secret ballot, but it was clear from floor-vote speeches that tallies reflected regional differences.

“The decisions will have a big impact on the future of the church,” Chiomadzi said. “I am not sure relationships across the church are going to be the same after this. I am very anxious.”

In protests, prayers and songs, many LGBTQ United Methodists expressed a sense of anguish.

Also unknown is how many disheartened United Methodists will make their way to the exits.

The last piece of legislation General Conference approved was an amended version of a petition that allows churches, with limitations, to leave the denomination with their property. The Judicial Council ruled a previous iteration of the legislation unconstitutional but the new version is not, at this point, up for court review.

Just before General Conference ended, the Rev. Donna Pritchard, delegate from the Oregon-Idaho Conference, proclaimed the Western Jurisdiction was not going anywhere and would remain on its path of inclusion.

“The Western Jurisdiction intends to continue to be one church, fully inclusive and open to all God’s children across the theological and social spectrum,” Pritchard said as other delegates from across the jurisdiction stood beside her.

The Rev. Jeff Greenway, chair of the Wesleyan Covenant Association that lobbied hard for the Traditional and Modified Traditional plans, worried that the plan as it stands “has no teeth.”

“There’s little likelihood of accountability, which means people all around the church are increasingly frustrated,” he said.

The Wesleyan Covenant Association’s leadership council is holding a meeting Feb. 27-28 to determine next steps, which could include calling an April 25-26 Convening Conference that would potentially start a new denomination. 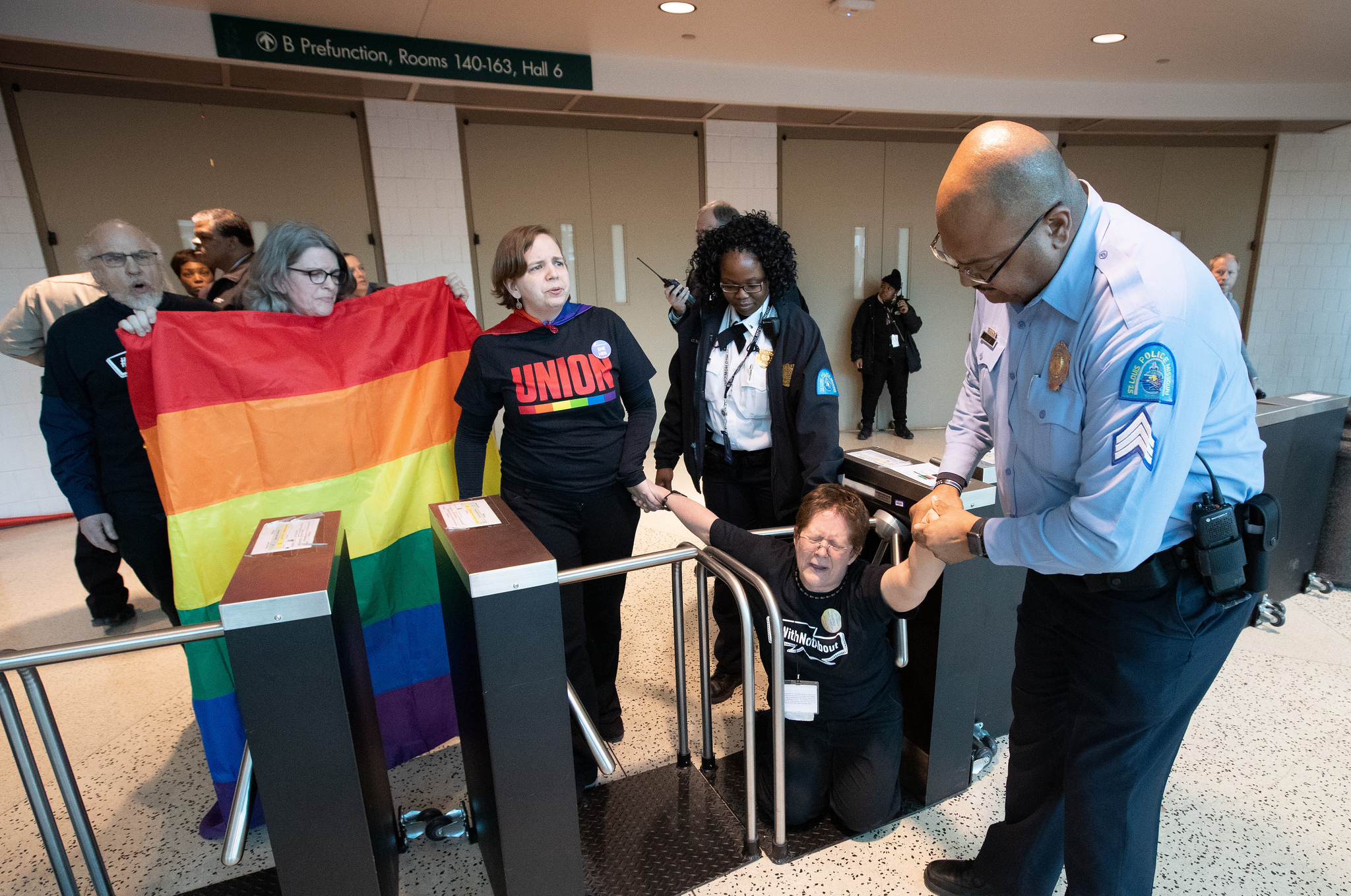 A St. Louis police officer pulls Carol Scott through a turnstile barricade in the Dome at America's Center in St. Louis, site of the 2019 United Methodist General Conference. Scott, a member of the Church of Saint Paul and Saint Andrew in New York, joined other supporters of full inclusion for LGBTQ persons in the life of The United Methodist Church in a protest outside the legislative assembly. Photo by Mike DuBose, UMNS.

The Traditional Plan was among the plans to emerge from the commission’s work as did the One Church Plan, which would have left questions of marriage up to individual churches and clergy, and ordination up to conferences.

The One Church Plan had the backing of a majority of bishops and was affirmed by a majority of commission members. But the plan only had about 47 percent support from the delegates.

Most of the delegates are the same who served in 2016.

As of October, the bishop-appointed commission had used 56.2 percent of its nearly $1.5 million budget. That does not include the commission’s participation in the special General Conference.

The special General Conference itself cost about $3.6 million.

No matter what they feel about what transpired, many of those at General Conference were already looking to Sunday.

Even those in pain saw hope in the weekly worship timed to be a reminder of Christ’s resurrection.

Ben Weger, a transgender worship leader at Allendale United Methodist Church in St. Petersburg, Florida, said he expects to go to church on Sunday and have a time of lament.

“But I think there will also be joy because we already know who we are,” he said of his church, which identifies as Reconciling, meaning it advocates LGBTQ equality. “We are going to continue to be and build the church we have been called to.”

“The people who are my heroes,” he said, “are the people who have been hurt by the church and yet stay at the table.”