In a May 29 online meeting that also included prayers for an end to racism, General Council on Finance and Administration board members got a glimpse of some of the financial challenges ahead.

For the first four months of the year, general church apportionment receipts in the U.S. dropped about $3.2 million compared to the same period in 2019.

April, so far, saw the steepest decline — with the collection rate down 26% compared to last year and 45% compared to 2017.

“This indicates the impact that the coronavirus has had so far on general church collections,” Rick King, GCFA’s chief financial officer, told the board.

“In March, we saw a little bit of decline compared to prior years. It was really felt in the Western Jurisdiction, where the epidemic started in the U.S. on the west coast,” King said, adding that the decline spread in April.

The finance agency’s board updated its bylaws to:

• Make clear the board, its committees and individual members can participate in meetings online, a practice the board has embraced as a cost-saving measure long before COVID-19.

• Allow board officers and committee members, who are not board members, to continue in their respective roles until replacements are elected and qualified. GCFA board has committee members who act as advisors with voice but not vote.
The denomination already was dealing with a slump in giving in 2019 after the special General Conference’s passage of the Traditional Plan led unhappy congregations and individuals to withhold money despite a strong U.S. economy. The ongoing debate over the role of LGBTQ people in the church has led to a number of proposals to split the denomination and an uncertain financial future.

Even as the pandemic has put those proposals on hold, it has presented a challenge to the denomination unlike anything seen since The United Methodist Church formed in 1968.

By April, United Methodist churches around the globe had suspended in-person worship to slow the deadly coronavirus. Congregations are just now slowly returning to their buildings but with a whole checklist of added and potentially expensive precautions.

Funding for the denomination’s seven general church funds comes from conferences, which in turn ask for apportionments — requested giving — from local churches. Typically, more than 85 cents of every dollar in local church revenue remains with that congregation. About 2 cents of each dollar given goes to general church ministries.

An untold number of United Methodist churchgoers also are now out of work, as the U.S. sees its highest unemployment rate since the Great Depression in the 1930s. 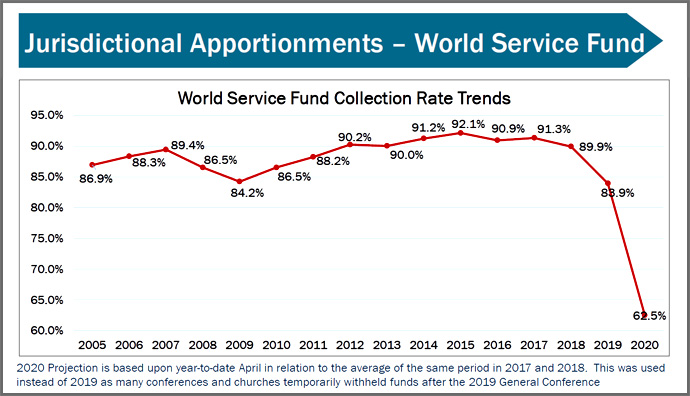 This graph from the General Council of Finance and Administration shows a sharp dip in World Service Fund collection rate trends projected in 2020 based on a year-to-date April in relation to 2017 and 2018. The World Service Fund supports most of the general agencies. Graphic courtesy of GCFA.

Already faced with uncertainty, most United Methodist general agencies and the denomination’s Episcopal Fund, which supports bishops, had budgeted for 2020 based on a 70% apportionment collection rate. At the current giving rate, the General Council on Finance and Administration projects 2020 apportionments could come well below that.

The GCFA board spent part of its meeting hearing an update on the Episcopal Fund, which was in peril of running out of money even before the current crisis.

At present, King said, the fund’s revenue is about $422,000 lower than budgeted, but because of reduced spending, the bishops are making up for some of that lost revenue. Still, at a 65% annual giving rate, GCFA projects that the fund could be in the red by the end of 2022.

In May, the bishops agreed to form a task force that will look at strategies to move the Episcopal Fund toward financial sustainability. Among the ideas on the table is reducing the number of U.S. bishops. The task force plans to release its recommendations in November.

Over the past three years, the GCFA board each summer has set bishops’ salaries and support for their office staff. However, the board is postponing any action until it receives the task force’s report, said the Rev. Steve Wood, who chairs the board’s committee on general agency and episcopal matters.

Amid the drops in giving, various U.S. United Methodist entities, including churches, conferences and general agencies, have found some relief from Paycheck Protection Program loans. The U.S. Small Business Administration program, initiated in response to the coronavirus, aims to help small businesses — including nonprofits — keep workers on the payroll.

Most of the 10 general agencies that receive church giving, including GCFA, have applied for and received loans through the program. The one exception is the United Methodist Board of Higher Education and Ministry. All told, the agencies now have nearly $7.9 million in loans. Based on the program’s requirements, the agencies each expect their loan amounts to be forgiven.

“Some agencies have returned funds they deemed to be in excess of the amount that will be forgiven,” King told United Methodist News.

In addition to encouraging churches to seek available help from the U.S. government, GCFA and United Methodist Communications have launched the #IGiveUMC campaign to boost giving to local churches.

This new campaign aims to inspire United Methodists and other to donate to local churches in honor of someone who has made a difference to them.

“We are mindful that people are losing jobs,” Dean said. “But in places where people are still working and want to support their local church, we created a campaign to communicate the need and the thankfulness we have for people who continue to give.”

The top executive of the agency advocating for women’s equality in the church reflects on how far they’ve come and what work still remains.
General Agencies

United Methodist leaders agree that big changes are coming as the denomination grapples with rising church disaffiliations. But disagreements remain on how best to balance financial uncertainty with missional commitments.
Theology and Education