The year 1968 convulsed with assassinations, riots, war in Vietnam and international student protests against that war. The Troubles rocked Northern Ireland, and Soviet tanks rolled into Czechoslovakia.

At a time when it seemed much of the world was violently splitting apart, a group of Wesleyan Christians peacefully and joyfully were coming together.

“Lord of the church, we are united in thee, in thy church, and now in The United Methodist Church. Amen.”

With those words in a Dallas auditorium, the 750,000-member Evangelical United Brethren Church and the 10.3 million-member Methodist Church became one church. The merger also brought people together in another way: marking the official dissolution of the Methodist Church’s racially segregated Central Jurisdiction.

Amid a tumultuous year — just weeks after the assassination of the Rev. Martin Luther King Jr. — a new United Methodist Church was born.

“It felt like the restoration of the Methodist movement,” said the Rev. Joseph Evers, a Methodist delegate to the 1968 Uniting Conference. He is now 91 and lives in Quincy, Illinois.

Reaching unity required years of effort and a commitment to address racism that remains a work in progress.

The Rev. Gilbert H. Caldwell, newly named as a district superintendent at the time, was among the demonstrators at the doorway to the Uniting Conference promoting integration. They held signs silently reminding delegates the church still had work to do. Caldwell's sign quoted the title of King's final book: "Where Do We Go from Here... Chaos or Community?"

"We knew even though we eliminated the Central Jurisdiction, issues of race and racism were still there," he said. 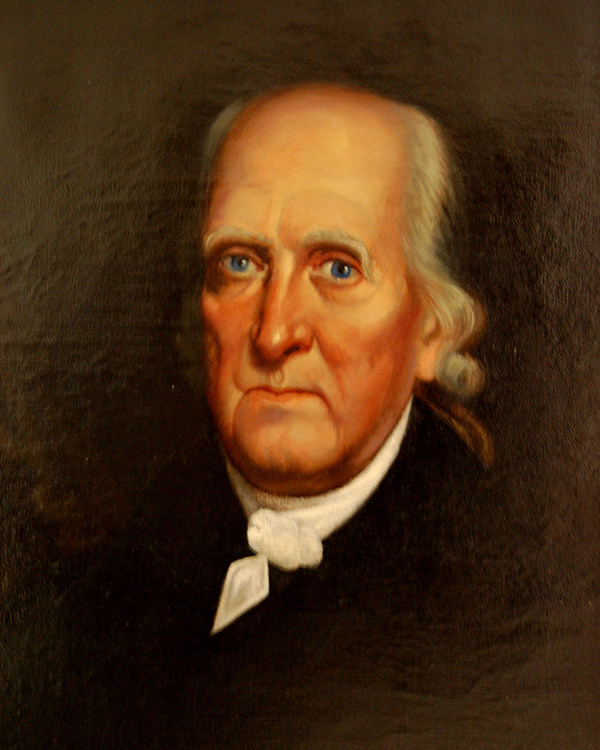 Philip Otterbein, co-founder of the United Brethren. Portrait courtesy of  Archives and History.

Blessed be the ties

The early leaders of what would become The United Methodist Church had close ties. They just took more than a century to bind.

Philip Otterbein, the German-born co-founder of the United Brethren in Christ, was friends with Francis Asbury, Methodism’s pioneering bishop. In fact, Otterbein participated in Asbury’s ordination at the 1784 Christmas Conference, the event that marked the founding of the Methodist church in America.

Jacob Albright, founder of what became known as the Evangelical Association, came to Methodism through a class meeting and began preaching and forming classes of his own among fellow German-speaking Americans. However, a lack of cooperation from English-speaking Methodists led both Otterbein’s and Albright’s followers to organize their own denominations. 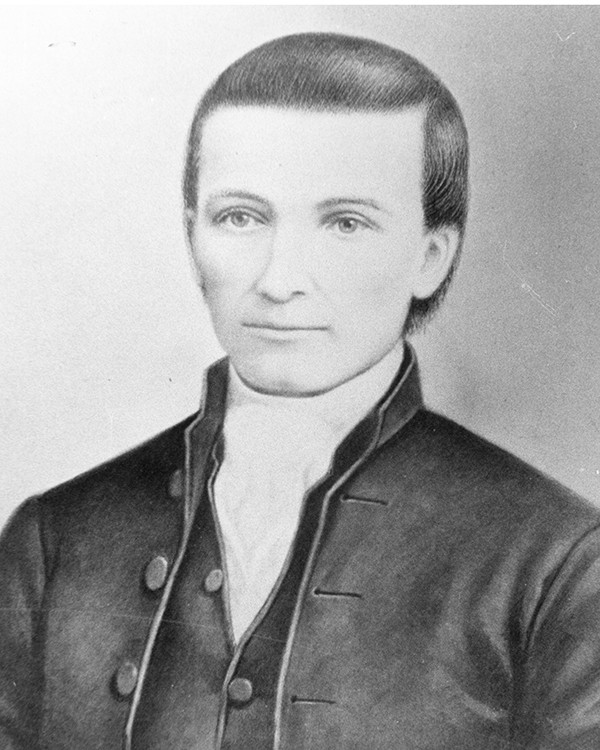 Jacob Albright, founder of what became the Evangelical Association. Portrait courtesy of Archives and History.

Language differences weren’t the only source of division. U.S. Methodism during its first century saw a structural split about once every decade, wrote noted church historian, the Rev. Russell E. Richey. Most dramatically, northern and southern Methodists ruptured over slavery in 1844.

By the early 20th century, John Wesley’s spiritual descendants had gone from breaking up to making up — but at great cost.

Most notoriously, the Methodist Episcopal Church South required the creation of the Central Jurisdiction, which enshrined the segregation (and attendant second-class treatment) of African-Americans in the new denomination’s constitution.

Nonetheless, members of both denominations continued to push for a church more in keeping with Jesus’ prayer in John 17:21 that believers “will be one.” 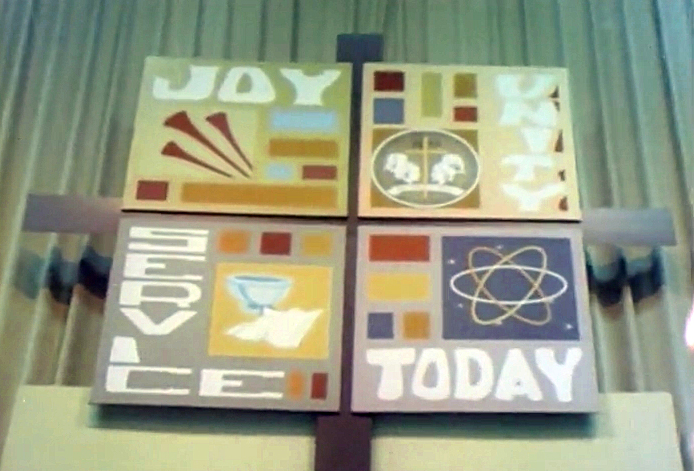 A banner proclaiming JOY, UNITY, SERVICE, TODAY hangs above the altar in the plenary space of the 1968 Uniting Conference in Dallas. Screenshot from 1968 Television, Radio and Film Commission video.

The Methodist Church’s Television, Radio and Film Commission — a predecessor to today’s United Methodist Communications — put together this film marking the occasion.

You can also find resources for celebrating the anniversary at UMC.org/umc50.

At the same time the Methodists and Evangelical United Brethren were talking, other denominations embarked on similar dialogues that would lead to the formation of the United Church of Christ in 1957, the Presbyterian Church (USA) in 1983, and the Evangelical Lutheran Church in America in 1988.

The path to The United Methodist Church wasn’t without roadblocks. Bishops from both denominations in 1957 identified possible impediments to union, said the Rev. Ted Campbell, church history professor at Southern Methodist University’s Perkins School of Theology in Dallas.

One issue was that the Methodist Church gave bishops life tenure while the Evangelical United Brethren had term limits. The list also included the size difference between the two churches, the manner of selecting district superintendents, overlapping church agencies, and finding a name that would honor the heritage of both denominations.

To make the union happen, the two denominations made compromises. United Methodists in the U.S. adopted the Methodist practice of life tenure for bishops. The Evangelical United Brethren’s Council on Ministries structure was adopted, and is still used to coordinate ministries at the local church and other levels of the denomination. The word United also became part of the new church’s name. 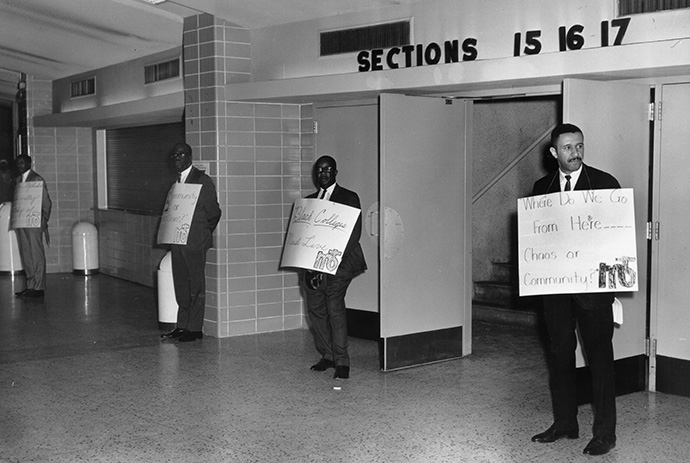 “Where do we go from here… Chaos or Community?” appears on the sign held by the Rev. Gilbert H. Caldwell by the entrance to the plenary for the 1968 Uniting Conference in Dallas. The phrase is the title of the Rev. Martin Luther King Jr.’s final book, and a reminder of the church's ongoing call to confront racism. Photo courtesy of Archives and History.

The Central Jurisdiction was not on the initial list of trouble spots, Campbell pointed out, but that came later.

The Evangelical United Brethren — following petitions from the church’s Illinois Conference — ultimately made abolishing the segregated institution a condition for union, said the Rev. J. Steven O’Malley. He was an ordained EUB pastor at the time of the merger and now a professor at Asbury Theological Seminary in Wilmore, Kentucky.

“This move reflects longstanding EUB opposition to segregation and, before that, slavery,” he said.

Four years before the union, Methodist conferences within the Central Jurisdiction began transferring to geographical jurisdictions.

“By 1964, there were just so many of us who thought segregation was wrong and that the Central Jurisdiction was an anomaly in the Methodist Church because our theology didn’t support segregation,” said Evers, the Methodist delegate. “But it lasted too long.”

In a reversal of what happened in prior mergers, the 1968 union also assured women the right to be ordained and have full clergy rights, said the Rev. Patricia Thompson. She is the author of “Courageous Past — Bold Future: The Journey Toward Full Clergy Rights for Women in The United Methodist Church.”

However, the church sometimes struggled to live up to its teachings.

Retired Bishop Susan W. Hassinger, who came out of the EUB tradition, was ordained in 1968. She waited two years for her first appointment, which was only part-time.

The United Methodist Commission on Archives and History and other historical organizations will hold “Merging the Streams: Celebrating The United Methodist Church’s 50th Anniversary.” The gathering on July 9-12 at United Theological Seminary in Dayton, Ohio, will include presentations from many of the historians in this article. The gathering will celebrate both the denomination’s Evangelical United Brethren heritage and the end of the Central Jurisdiction.

Hassinger and other church leaders say the denomination can learn from its union. Those lessons seem especially relevant as the church prepares for a special General Conference in 2019 where delegates will face questions of whether attitudes toward homosexuality should be church-dividing.

“People had to listen to each other across differences and learn how to value the other,” said Hassinger, now bishop-in-residence at United Methodist Boston University School of Theology.

O’Malley thinks the church can benefit from its Evangelical United Brethren heritage by taking a more “irenic” approach to conferencing, church order and social principles — that is, an approach aimed at reconciliation and peace.

The Rev. Ian Straker, a former Howard University School of Divinity professor who has researched both the church split over slavery and the Central Jurisdiction, has yet another lesson in mind.

While uniting a church is hard, he said, breaking up is even harder. The split in 1844 was not as simple as the amicable declaration made at that year’s General Conference.

“Stuff was tied up in litigation for decades,” he said. “It made a bunch of lawyers happy, but it was not neat and easy.”

Defiance of rules passed by General Conference goes back to the earliest days of the first Methodist denomination in the U.S. A United Methodist professor writes about why the current debate over homosexuality is driving a church separation.
Global Health