Faced with the possible departure of multiple churches, United Methodist leaders are preparing the smallest denominational budget in more than 30 years.

The General Council on Finance and Administration board, by a 9-7 vote, approved proposing a 2021-2024 general church budget with the bottom line of about $413.4 million.

General Conference will have the final vote on the four-year budget when the denomination’s top lawmaking body meets. That gathering is scheduled for May 5-15 in Minneapolis.

The finance agency board’s proposal represents about $80 million less than the already historically low budget of $493.8 million that the board initially planned to submit. And it is substantially less than the most recent $604 million budget General Conference passed in 2016.

What this means is that denomination-wide ministries supported by church giving — including seminaries, bishops and most of the general church agencies — will need to prepare for dramatic cuts to their work and potential layoffs.

The current proposal will be the lowest budget submitted to General Conference since 1988, according to the United Methodist Commission on Archives and History. That's the last time the legislative assembly took up a budget around $400 million. The United Methodist Church of 1988 had about 3 million fewer members than today and had yet to establish Africa University, now supported with denominational funds.

The board voted for further cuts on the recommendation of the Economic Advisory Committee, a group of United Methodist financial forecasters.

However, the board’s decision did not come easily. Board members wrestled for hours with the proposed reductions during their March 9-10 meeting at the Scarritt Bennett Center in Nashville, Tennessee.

“I really went back and forth on this a lot,” the Rev. Anthony Tang, a board member from the Desert Southwest Conference, said after the vote. 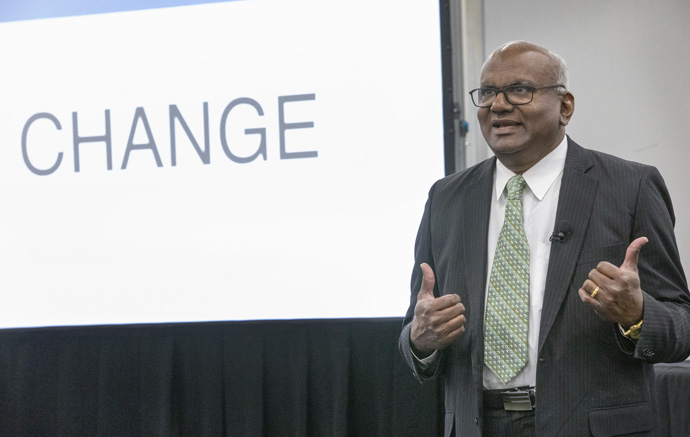 The Rev. Moses Kumar speaks during the meeting of the General Council on Finance and Administration board held March 9-10 at Scarritt Bennett Center in Nashville, Tenn. He is the agency’s top executive. Photo by Kathleen Barry, UM News.

He voted against reducing another $80 million budget at this point, but he also warned that he expects deeper drops in giving to come.

“I think we’re entering into a world of hurt coming up over the next several years,” he said. “I think this places the responsibility on our general agencies to prepare in advance for another season.”

The finance agency board initially made plans to cut the general church budget in 2018 in hopes of keeping more funds in local churches.

Now, Tang and other board members confronted the possibility that many of those local churches might choose not to remain United Methodist.

Multiple plans are heading to General Conference that aim to resolve the church’s longtime debate over the status of LGBTQ people with some kind of denominational split.

Among those plans is the Protocol of Reconciliation & Grace Through Separation, a mediated agreement negotiated by leaders on opposite sides of the homosexuality debate. The protocol would allow traditionalist churches and conferences to leave with their properties and form a separate denomination, using $25 million in United Methodist funds. The legislation also sets aside $2 million for other groups of churches that want to disaffiliate and form a denomination.

In small-group discussions, board members, agency executives and other guests discussed potential sources for those funds. However, the board made no recommendations.

Instead, board members spent most of their March meeting discussing the financial implications of church departures on the remaining United Methodist Church.

Neither the GCFA board nor its staff know just how many churches and members will leave if a plan of separation passes. However, they know that it will affect church giving. 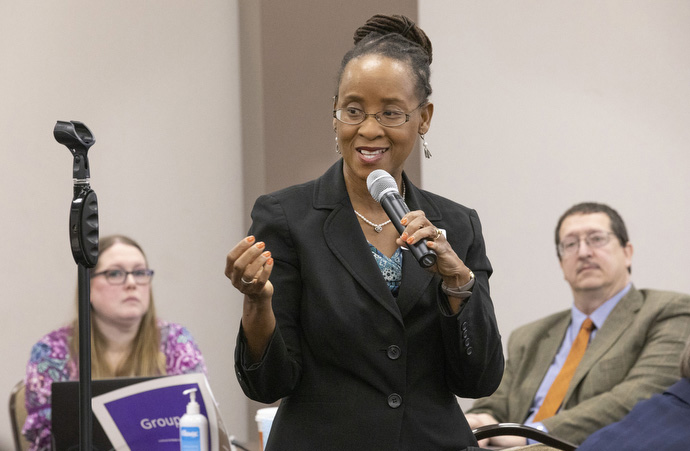 The Rev. Kennetha J. Bigham-Tsai speaks during the meeting of the General Council on Finance and Administration board. Listening in the background are Sara Hotchkiss and the Rev. Gary Graves. Photo by Kathleen Barry, UM News.

Here’s how giving to the general church works now.

“Whatever we present to General Conference is not what’s actually going to happen,” said Rick King, GCFA’s chief financial officer. “You just need to understand that.”

The giving in the U.S. in turn determines the apportionments requested from conferences in Europe, Africa and the Philippines. The U.S. provides 99% of the funding for general church ministries.

During its March 9-10 meeting, the General Council on Finance and Administration board also approved reduction of $22 million to the following funds it allocates:

The economists who serve on the Economic Advisory Committee suggested to GCFA one way to plan for the unpredictability — budget as if the denomination is going to lose 17.5% in net local church expenditures.

What this means is GCFA will go on requesting apportionments using the same formula. But agencies and other churchwide ministries will budget for receiving far less than requested.

Ultimately, King explained, there is a possibility the ministries will actually receive the $80 million now subtracted from the budget. In short, the budget represents a case of hoping for the best and planning for the worst.

However, that doesn’t make shaving another $80 million from the budget any easier.

The denomination has seven apportioned funds. The GCFA board makes recommendations on the distribution of two — the Episcopal Fund, which supports the bishops, and the General Administration Fund, which supports General Conference, the Judicial Council, Archives and History and the finance agency itself.

The Connectional Table, another church leadership body, has responsibility for allocating general church giving among the five other funds.

The Rev. Kennetha Bigham-Tsai, the Connectional Table’s top executive, told the GCFA board that under the proposed protocol, there are some funds that can’t be cut.

The protocol asks that $39 million be reserved over the next eight years for the denomination’s ethnic plans and Africa University. Half of that funding is already in the four-year budget.

Bishop Mike McKee, GCFA board president, acknowledged the difficulty faced in the uncertainty ahead.

“What I realize about our church is we all need each other,” he said in a sermon. “There are decisions for people to make, but I hope we do it well.”