Faced with the denomination’s uncertain future, United Methodist agencies are tightening their belts and budgeting for a potential plunge in giving in 2020.

The GCFA board unanimously approved 2020 agency spending plans — almost all based on a 70% apportionment collection rate.

“Financial giving is not where we want it to be,” Moses Kumar, the top executive of the General Council on Finance and Administration, told his agency’s board on Nov. 15.

That drop in revenue, he added, has implications for ministry that The United Methodist Church does around the globe.

Each autumn, the GCFA’s board must approve the coming year’s spending plans for the 10 general church agencies and other church entities that receive funding through apportionments. This helps ensure their spending is in line with what General Conference, the denomination’s top lawmaking body, passed as the general church’s four-year budget.

Agencies never budget with the expectation of receiving 100% of apportionments — that is, requested giving from conferences and local churches. However, GCFA typically recommends agency spending plans be based on an 85% to 90% apportionment collection rate.

Ahead of 2020, the finance agency urged fellow agencies to plan for significantly lower payouts. 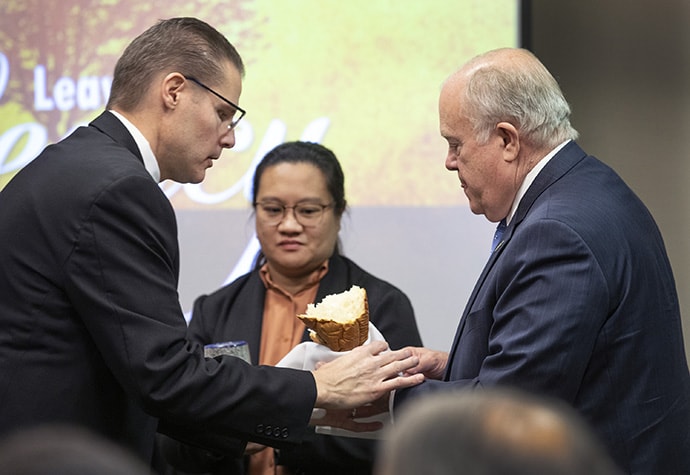 The Rev. Dustin Petz (left) of the Great Plains Conference hands bread to Bishop Michael McKee during the Nov. 15 communion service at the GCFA board meeting. Holding the chalice is board member Regan Reyes de Guzman of the Philippines. Photo by Kathleen Barry, UM News.

In hard numbers, a 70% collection rate translates to the board approving about $150.2 million in agency spending next year — down by about $14.3 million the board approved for this year.

This total includes general church spending on Africa University, the Black College Fund and Ministerial Education Fund — all of which the United Methodist Board of Higher Education and Ministry administers. It also includes the 2020 spending plan for the finance agency itself, which the board approved in October based on a 70% payout.

The year General Conference meets always brings additional expenses. With that in mind, the General Council on Finance and Administration board approved the following grants from contingency funds:

After these grants, the General Administration contingency funds still has about $1.8 million available.

The GCFA board also agreed to support promoting a special offering for migrants in 2020 and the proposal that General Conference designate an annual Special Sunday offering for Migration, starting in 2021.

The request comes from the Council of Bishops, and the offering would go to Global Migration Advance (No. 3022144), a fund established in 2014 to support migrants around the globe.

The denomination currently has six churchwide Special Sundays that fund particular efforts such as peace work, scholarships, Native American ministries and the administrative costs of the United Methodist Committee on Relief.

A big reason for the reduced budgets is caution ahead of the 2020 General Conference, scheduled for May 5-15 in Minneapolis. Options before the delegates include proposals to split the denomination or dissolve it entirely.

“There is a large degree of uncertainty about what will happen at General Conference and what will happen after,” said the Rev. Steve Wood, who chairs the GCFA committee on general agency and episcopal matters.

The reduced spending plans, Wood said, are “prudent, and hopefully, we’ll all be in better shape than 70%.”

General church ministries already are dealing with a falloff in giving this year since February’s bruising special General Conference that focused on the church’s homosexuality debate.

At present, U.S. giving — which supports the bulk of general church ministries — is down 4.3% compared to where it was at the same time last year. Agencies already are spending less than budgeted for the year.

Even before this year’s drop in giving, GCFA had planned to recommend a $493.8 million general church budget for 2021-24 — the smallest in more than 20 years. The plan, worked out with the denomination’s Connectional Table, calls for deep spending cuts by agencies. Giving patterns, financial forecasts and other data could result in adjustments to the four-year budget early next year.

Agencies are dipping into reserves to make up some shortfalls.

However, agencies are curtailing ministry as well, and in some cases that can mean layoffs.

Kumar told the GCFA board his agency has already seen a 22-person reduction in staff — of those, seven were laid off.

The staff reduction, he said, translates to about $1.5 million.

The Rev. Alfred T. Day III, the top executive of the United Methodist Commission on Archives and History, told UM News his agency’s ministries would take a hit.

“It means that an already bare-bones budget — cut each year of this quadrennium in anticipation of leaner times — will be even more starved,” he said.

He said the agency won’t be able to pay for travel of conference archivists to receive training. The cuts also mean digitization and other technological improvements to the denomination’s memory bank will go on the back burner.

The Rev. Greg Bergquist, the top executive of Higher Education and Ministry, said while his agency is still assessing the full impact of lowered apportionments, the agency’s 2020 strategy will include programmatic cuts.

“We will be reaching out to our constituents in the coming months to update them on our plans to shape a leaner agency while still preserving our core mission and ministry,” he said.

He added that the agency is called to the ministry of learning and leadership formation in the United Methodist and Wesleyan tradition.

“Our mission is vital to the church. We are going to do everything we can to uphold it,” Bergquist said.

Any significant drop in giving affects ministry, said Steve Horswill-Johnston, Discipleship Ministries' chief communications officer. However, he said his agency has been trying to prepare for denominational changes.

"Discipleship Ministries has worked for the past two years to anticipate that major shifts in the denomination were accounted for in our structural redesign that began in 2018," he said.

Kumar ended his presentation to his board with a plea that the group encourage generous giving.

“We are in a critical situation,” he said. “If your annual conference is not giving its apportionments, please talk to them. …It can make a difference.”

The Judicial Council ruled that a much-debated church law can only be used to deed and transfer church property to another denomination with which The United Methodist Church has an existing agreement. No such agreement exists with a new breakaway denomination that launched this year.
General Agencies