After hours of delaying tactics by opponents, the United Methodist General Conference 2019 delegates passed The Traditional Plan 438 to 384.

A last-ditch effort to bring the One Church Plan back was defeated in the morning and was followed by efforts to amend the Traditional Plan to address constitutionality issues raised by the Judicial Council, the church’s top court.

The Rev. Tim McClendon, South Carolina, called for a vote on the Traditional Plan as amended, which affirms the church’s current bans on ordaining LGBTQ clergy and officiating at or hosting same-sex marriage. It also boosts penalties and accountability for transgressions of those bans.

Later, the Rev. Timothy Bruster, Central Texas, made a motion to request a declaratory decision by the Judicial Council on the constitutionality of the Traditional Plan. The motion passed 405-395. The council will address the request at its next scheduled meeting April 23-25 in Evanston, Illinois.

The council had ruled earlier that parts of the plan were unconstitutional.

The Rev. Gary Graves, secretary of General Conference, said any piece of legislation that the Judicial Council declares unconstitutional will not be included in the Book of Discipline, the denomination’s policy book. 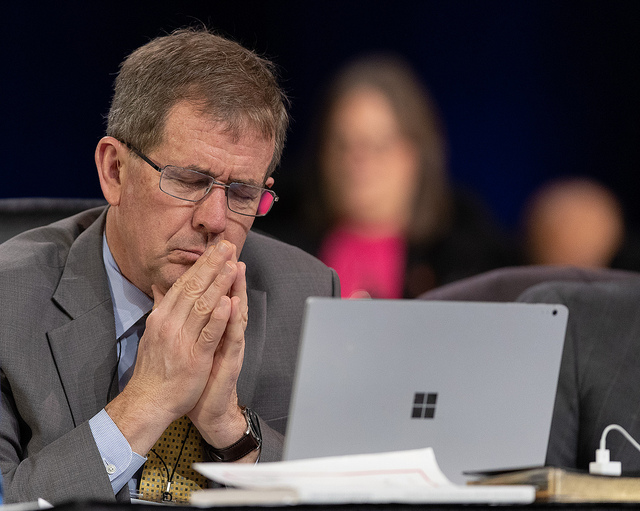 Near the end of the day, delegates voted to adopt the minority report for one of the petitions on disaffiliation, which passed.

Legislation closed with an omnibus motion to reject any remaining petitions.

At the end of a brief closing worship, Council of Bishops President Kenneth H. Carter wished everyone in attendance “the peace of the Lord in the midst of all you have experienced.”

When the Traditional Plan vote was announced and flashed on the screen, the room erupted with observers singing “Blessed Assurance.” Some delegates gathered in a circle and joined in with the singing.

Some delegates on the floor and people in the bleachers went into a call and response, chanting in protest of the vote.

A handful of observers unhappy with the day's legislative results tried to gain entrance to the plenary floor, but security officers blocked them and eventually moved them through turnstiles farther away from the doors. The protesters continued to chant their demand for admission. 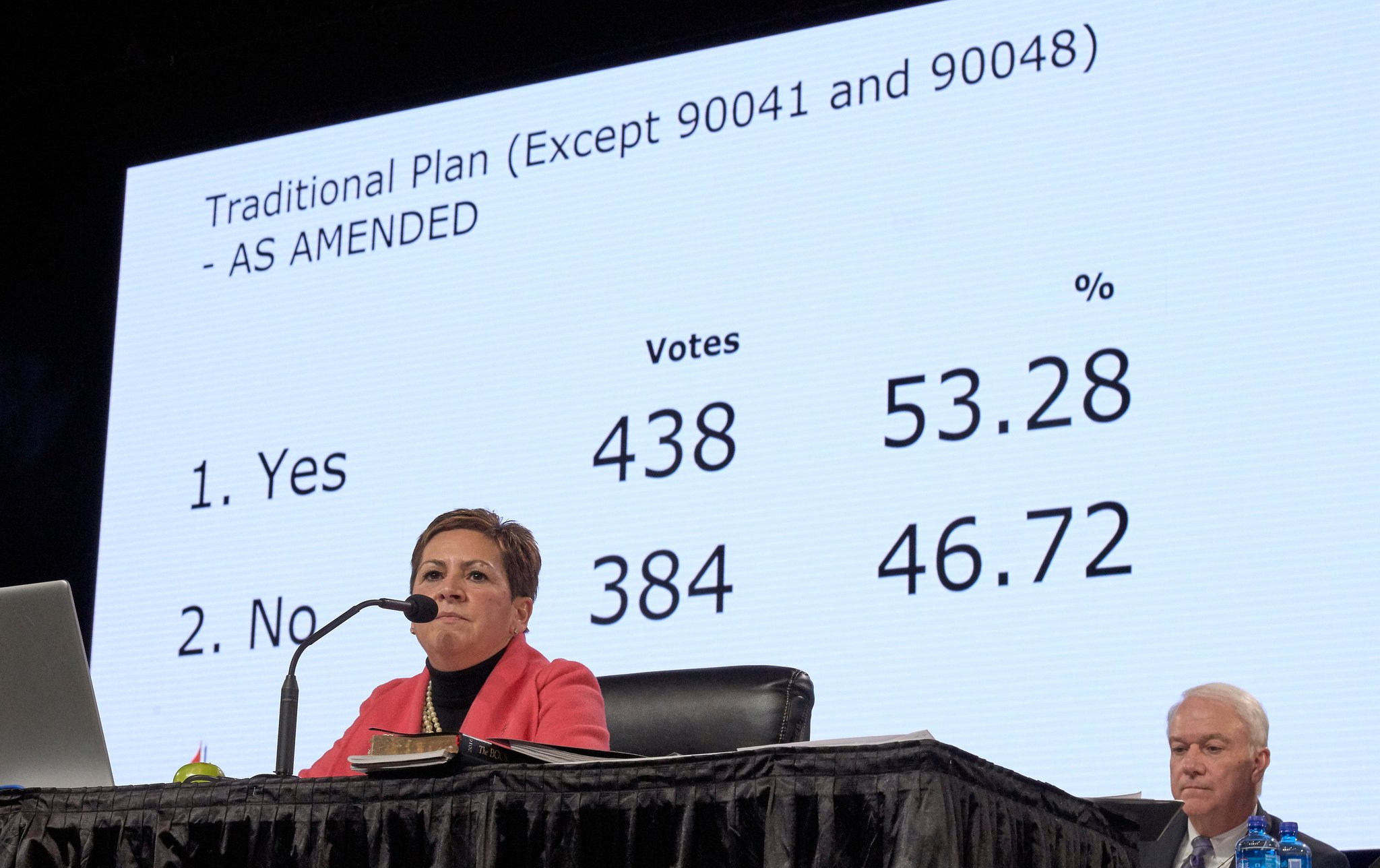 Bishop Cynthia Fierro Harvey observes the results from a Feb. 26 vote for the Traditional Plan, which affirms the church’s current bans on ordaining LGBTQ clergy and officiating at or hosting same-sex marriage. The vote came on the last day of the 2019 General Conference in St. Louis. Photo by Paul Jeffrey, UMNS.

Bishop Carter said after this General Conference, bishops will have to do a lot of outreach, especially to progressives who feel hurt by what transpired.

“We are going to do a lot of outreach to progressives to say we see you,” he said during a press conference after General Conference adjourned. Carter is also the leader of the Florida Conference, which has congregations across the theological spectrum.

Bishop Scott Jones of the Texas Conference said the vote resolves a long-standing debate about how the church “can best accomplish our mission of making disciples of Jesus Christ for the transformation of the world.

“This decision is consistent with our denomination’s historic stance on human sexuality, outlined in the Book of Discipline since 1972,” Jones said.

“We will continue to welcome lesbian, gay, bisexual, transgendered and queer persons to our churches and affirm their sacred worth. I pray we, as a denomination, can now move forward, working with each other in the spirit of Christian love and joining together as one. We are stronger together in serving God’s mission as a diverse body of Christ,” Jones said.

One strategy opponents of the Traditional Plan embraced was to essentially “run out the clock” with amendments.

The Rev. Mark Holland, a Great Plains delegate, waved a stack of amendment forms and said, “We’re gonna amend until the monster trucks roll in,” referring to the conference’s need to stop business by 6:30 p.m. and evacuate the facility for a truck rally. Holland leads Mainstream UMC, which lobbied hard for the One Church Plan.

In the morning, after passionate speeches, prayers and tears, the “one, last shot” for the One Church Plan was defeated by a vote of 449-374. The plan was also defeated the day before in the first vote.

The Rev. Tom Berlin, Virginia Conference, spoke for a minority report for the One Church Plan submitted Feb. 25. A minority report is a substitution for the report of the legislative committee. 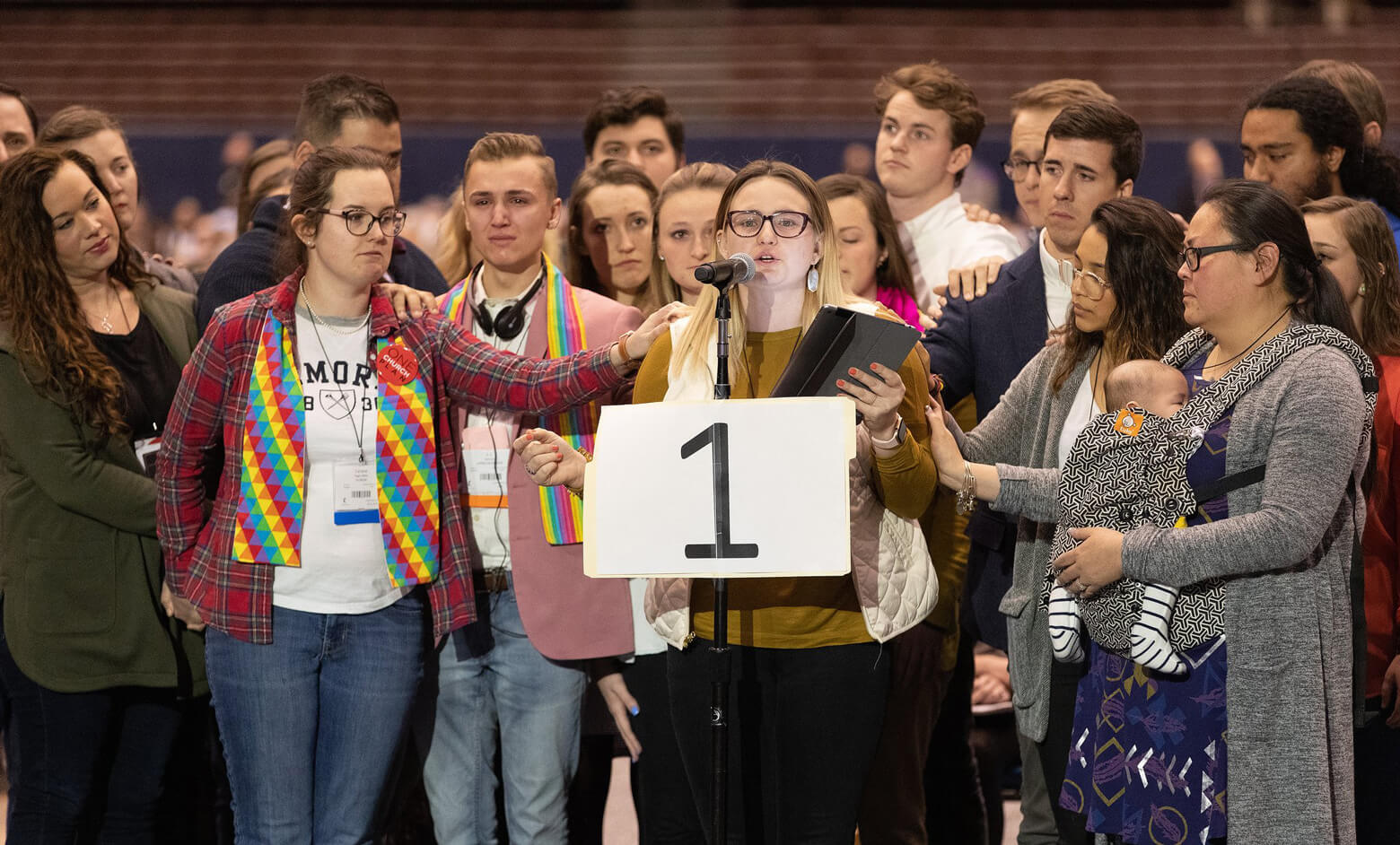 Delegate Shayla Jordan (at microphone) speaks in support of the One Church Plan during the 2019 United Methodist General Conference in St. Louis. She is surrounded by other delegates. Photo by Mike DuBose, UMNS.

“I have a love of the church that sometimes I do not even understand,” he said in presenting the report to the denomination’s top lawmaking assembly. “Sometimes I get emotional when I talk about it because I catch a glimpse of what we can be with God’s help.”

Berlin told delegates that approving the One Church Plan did not force any pastor or church to perform same-sex marriages, nor did it force anyone to change what they believe about the Bible. But the plan would have allowed conferences to ordain LGBTQ pastors, as well as allowing churches to host and pastors to officiate at same-sex marriages.

“If the Traditional Plan is voted in, it will be a virus that will make the American church very sick,” he said. “Many pastors are going to leave, many annual conference will leave. … There will be trials, and they will be on the news. The only news about the church will be about people we don’t serve.”

And he warned the virus would cross oceans and make the whole church sick.

However, other delegates stood to talk about following God’s “true word.”

Nancy Denardo, Western Pennsylvania, cited Scriptures in her argument against the One Church Plan.

“Friends, please stop sowing seeds of deceit,” she said. “I’m truly sorry if the truth of the Gospel hurts anyone; I love you and I love you enough to tell the truth.”

The Rev. Jerry Kulah, a Liberia delegate and leader of the Africa Initiative coalition, argued for the Traditional Plan.

“The Traditional Plan is not only traditional but biblical; it ensures God’s word remains foundational to the life and growth of the UMC. I submit we love our LGBTQ friends,” he said.

Lyndsey Stearns, West Ohio, a young person who described herself as a future pastor, spoke in favor of the One Church Plan and told the body in the past 24 hours, 15,529 young people had signed a statement in support of unity.

The statement says young people are not all of the same mind about LGBTQ people.

“And yet through working together, sharing stories, and worshipping side by side, we have seen each other’s gifts and fruits for ministry. We have witnessed the incredible ways that God is working through each of us in our own unique contexts.” 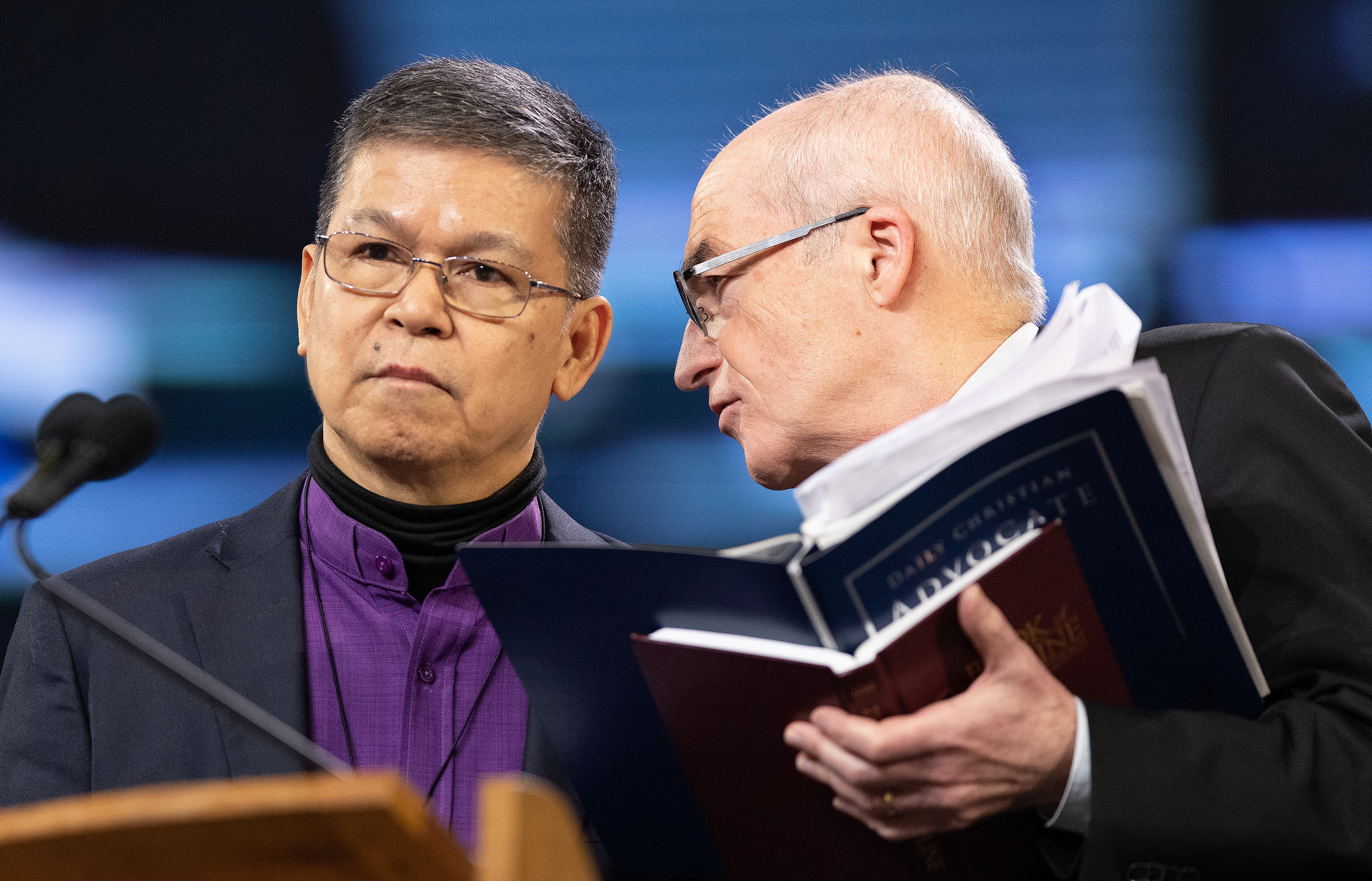 Bishops Ciriaco Q. Francisco (left) and Patrick Streiff confer at the podium during the 2019 United Methodist General Conference in St. Louis. They both serve on the Standing Committee on Central Conference Matters. Photo by Mike DuBose, UMNS.

Aislinn Deviney, Rio Texas, who described herself as a young evangelical delegate, said many young people “fiercely believe marriage is between one man and one woman.”

“We are here at the table because of our dedication, not because we demand a place because of our age,” she said. “We speak for ourselves. We all have family and friends who are LGBTQ that we love and value.”

Before the vote, Berlin told delegates to follow the Golden Rule of Jesus.

“Be consistent, and modify the Book of Discipline to eliminate all the divorced, all those who cohabit before marriage and apply those standards to yourself first,” he said.

There are clergy and bishops who would have to surrender their credentials for violating those Scriptures, he added. “But I don’t think that’s the church you want.”

An amendment to apply those standards beyond LGBTQ people was voted down.

The Rev. Joe Harris, chair of the legislative committee, addressed the delegates.

“After all the passionate debate, all I can say is God is with us and God will be with us and the Holy Spirit will guide us. Continue to do what you said you wanted to do yesterday, reject One Church Plan and continue on Traditional Plan.”

Earlier in the day, a petition was moved forward by the Standing Committee on Central Conference Matters that sets a timeline for GC2019 legislation’s implementation in Africa, Europe and the Philippines.

The petition, by a vote of 570-310, says legislation approved at GC2019 will not take effect in central conferences until 12 months after the 2020 General Conference.

An effort to have this timeline also apply to the United States failed because the part of the Book of Discipline affected only pertains to central conferences.

The delegates also approved two petitions recommended by Wespath Benefits and Investments, the denomination’s pension agency. Wespath manages investments for pensions and other retirement-plan assets on behalf of conferences, which are plan sponsors and legally responsible for paying benefits.

One petition requires that any local church that withdraws or is closed must pay, at a minimum, its fair share of unfunded pension liability for their annual conference.

Another petition spells out that any clergy members who end their relationship with a conference will be treated as “terminated vested” participants, meaning their accrued benefits would be safe and converted to an individual account balance. However, clergy no longer in the denomination could not receive any additional benefits conferences add down the line.

After some back and forth, delegates amended the legislation to say “nothing in the forgoing would prevent annual conferences collecting other obligations from local churches.”

Gilbert, Hahn and Butler are UMNS reporters in Nashville. Contact them at (615) 742-5470 or [email protected]. To read more United Methodist news subscribe to the free Daily or Weekly Digests.