Yed Esaie Angoran, who served for decades in Côte d’Ivoire’s first independent government and was a leader in The United Methodist Church, died June 13 after a heart attack.

Angoran, who was 73 and spoke several European and native languages, was a delegate to General Conference, the top policy-making body of The United Methodist Church, since 2012.

He served as Minister of Mines and Energy and of Postal Services and Telecommunications under Félix Houphouët-Boigny, the country’s first president. He was also state inspector general and chairman of the board of directors of the government radio and television stations.

Angoran served as general rapporteur of Côte d'Ivoire’s National Reconciliation Forum, modeled after South Africa’s Truth and Reconciliation Commission. In that role, he was the spokesperson for the forum, coordinating and compiling reports from the forum’s various commissions.

The forum was created to resolve the political and social tensions that Côte d'Ivoire experienced after a coup d'état in 1999, two civil wars and the advent of a civilian regime and adoption of a new constitution in 2000.

After leaving the government, Angoran served the Côte d’Ivoire Conference and the global denomination in many capacities.

“Angoran was knowledgeable and a key leader in the conversations leading to our integration into the United Methodist family in 2008 and to the ongoing relationships with the global connection,” Boni said.

Angoran attended Dabou Methodist Secondary School and graduated high school from the Lycée Clemenceau, Nantes, France. He earned a master’s degree in civil engineering from the University of Lorraine and a Ph.D. in geophysics from the Massachusetts Institute of Technology.

Angoran worked on the development of United Methodist Board of Global Ministries’ missions in Senegal and Cameroon, two new districts under the Côte d’Ivoire Conference.

He was also president of the board of directors of the United Methodist University in Côte d’Ivoire.

Top executives of church agencies praised him for his easy access and readiness to advance the mission of the church in Africa.

“Dr. Yed was instrumental as a UMCom board member. He helped us continue to evaluate communications needs and opportunities in West Africa to bring the Gospel to new people and to connect the church. We will deeply miss his guidance and friendship,” said Dan Krause, top executive of United Methodist Communications. 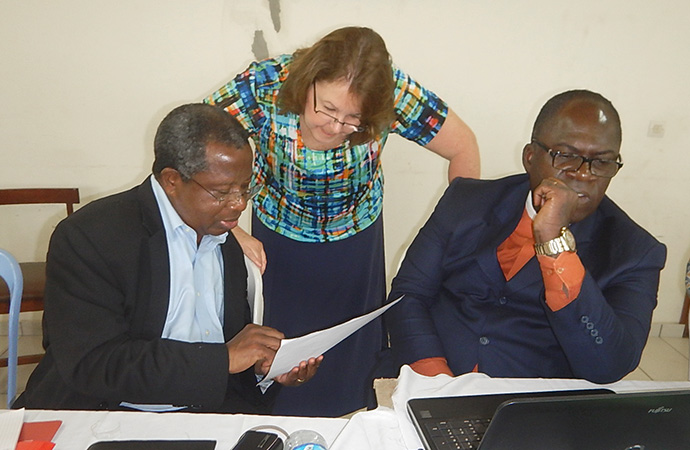 Yed Esaie Angoran (left) helps lead a writing workshop in Abidjan, Côte d’Ivoire, in 2015. Angoran, who died June 13, served on the board of many United Methodist agencies. With him are Robin Pippin of Discipleship Resources (center) and the Rev. Philippe Adjobi. File photo by Isaac Broune, UM News.

Angoran was the publishing coordinator of the Africa-French Edition of The Upper Room.

“One way Yed was unique was the horizon of his vision and the scope of his endeavors. Yed could see possibilities far into the future and was not afraid to make or encourage bold decisions. He was confident working alongside any leadership level, in any culture and context,” said the Rev. Stephen Bryant, publisher of The Upper Room and a staff executive for United Methodist Discipleship Ministries.

Bryant, who oversees the development of resources for the denomination’s central conferences, praised Angoran’s visionary leadership in creating contextual resources and establishing Editions Kanien, a sustainable publishing house in Côte d’Ivoire. Editions Kanien publishes the French edition of The Upper Room devotional guide that is also translated in Swahili for East Congo members.

Angoran was also the executive director of the United Methodist Board of Higher Education and Ministry’s Regional Hub for Leadership, Education and Development for West Africa and the French-Speaking Areas.

“In this capacity, he was leading a series of educational initiatives in Africa, including program development, fundraising, training initiatives, technical assistance,” said Amos Nascimento, Higher Education and Ministry’s staff executive for global education and new initiatives.

The LEAD Hubs had a virtual memorial meeting Sunday to “mourn Yed’s passing, celebrate his life and legacy, and share some memories of our work with him,” Nascimento said.

Angoran served in various program initiatives headed by Higher Education and Ministry, such as the Commission of the Central Conference Theological Education Fund and the African Association of Methodist Institutions of Higher Education.

The last conversation he had with a church member was on June 13 with Guillaume Djedjro, a member of the Upper Room local team. “He wrote a check to the printer and asked me to make sure this year second-semester edition of the Upper Room comes out of the press and distributed as quickly as possible,” Djedjro said.

In addition to his contributions to the global connection, Angoran was active in the development of the church locally.

“Angoran contributed financially to the construction of all the 40 local churches and seven parsonages in the ecclesiastic district of Sikensi,” he said. He also offered a fully equipped new personage to the United Methodist Church of Bakanou B in his village.

“We were waiting for the conference to assign a pastor there this July when appointments are made,” Amani said.

The Rev. Philippe Adjobi, superintendent of the South-Abidjan District, collaborated with Angoran in the Francophone Consultation Group and many projects such as the information technology system for Africa, Ebola Booklet, E-Reader Project and the Voice of Hope radio station.

“He guided us at all times in the most simply and humbly way possible without trying to impose his ideas,” Adjobi said.

The Rev. Didier Kokobé Becken, pastor of Beatitudes Plateau United Methodist Church, where Angoran was a founding member of the choir, said he went through church albums and could “not find a single picture where Yed is not smiling.”

Angoran is survived by his wife, Anna, who is lay leader at Beatitudes Plateau; five children, Niti, Ines, Eniloe, Alix and Josias; and four grandchildren.

Due to the government measures to contain the coronavirus, condolences to the family were extended June 16-18 at Angoran’s home. A prayer vigil and homage are scheduled for June 19 from 7 to 9:30 GMT. The vigil will be broadcast live. The burial will be private for family.