The United Methodist Church’s roots in Côte d’Ivoire date back to 1914, when William Wadé Harris arrived in the country from neighboring Liberia.

Completing a prison sentence for his role in a political revolt, Harris heard God directing him to Côte d’Ivoire. Telling the story today, United Methodist Bishop Benjamin Boni says people would walk more than 100 miles to hear Harris preach, and the magicians and juju makers fled before the evangelist. 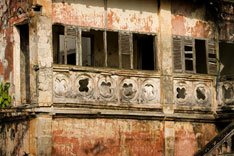 If Harris were to visit Côte d’Ivoire almost a century later, he would find a church that has grown over the decades into a powerful presence, providing a wide range of ministries.

The church started in the area of Grand Bassam, the French colonial capital on the coast of the West African country. Harris went on to neighboring countries, and in 1923, William Platt arrived and built on his predecessor’s work. In 1924, the Methodist Church was officially established in Côte d’Ivoire.

The church was related to the British Methodist Church for most of the 20th century, becoming fully autonomous in 1985.

In 2004, The United Methodist Church’s top legislative assembly welcomed the Protestant Methodist Church of Côte d’Ivoire into the denomination as a provisional annual conference. Four years later, the assembly confirmed Côte d’Ivoire as an episcopal area of the denomination. Boni, who had been president of the church since 1998, became bishop in 2005.

The church has about 700,000 members and serves a wider community of about 1 million, in a country with a total population of 21 million. The Côte d’Ivoire Conference’s main offices are in Abidjan, the commercial capital.

About a third of Ivoirians are Christian, a third or more are Muslim and some 20 percent follow traditional African religions. Methodism is the largest Protestant tradition, and the Catholic Church has the largest Christian presence.

The denomination has 900 churches and 100 preaching points, and its membership is growing 7 percent to 8 percent annually, according to the conference. This thriving church is led by a relatively small number of pastors – about 109 – with help from 6,000 local pastors and 7,000 to 8,000 class leaders.

Boni also oversees the United Methodist mission to neighboring Senegal, which has 800 to 900 members, and Cameroon, with about 1,200 members. For those countries as in Côte d’Ivoire, training pastors is a priority.

Women and young people are driving the Ivoirian church’s growth. 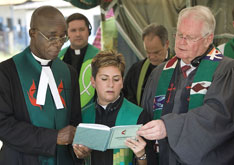 Clergy from the United Methodist Côte d'Ivoire and Texas annual conferences recite a prayer during a dedication service for mosquito net distribution at the Methodist Hospital of Dabou.

Methodism’s growth has been accompanied by an expansion of ministries not only into education but also health care and economic development. The church operates dozens of schools, a hospital and other health care ministries. In a country where governmental resources are under strain, The United Methodist Church is standing in the gap to address the needs of the whole person.

*Tanton is director of the Media Group for United Methodist Communications.