A delegation from the United Methodist Board of Global Ministries met with two mission initiatives — in Senegal and Cameroon — and announced these initiatives will become districts attached to the Côte d'Ivoire Conference.

The conference is awaiting the memorandum of understanding from Global Ministries before approving the two new districts. That memorandum will be signed in 2020.

With the addition of Senegal and Cameroon, the Côte d'Ivoire Conference will have 27 districts.

The strategy for the transition was approved during a meeting held before a June visit to the mission initiatives, attended by the Global Ministries delegation, Côte d'Ivoire Area Bishop Benjamin Boni and conference cabinet members.

During a closing worship service in Cameroon, the Rev. Philippe Adjobi noted that is “an honor for Côte d'Ivoire Annual Conference to welcome these two mission initiatives." He spoke on behalf of Boni, who attended the trip to Senegal but was unable to be in Cameroon.

While Adjobi said he was not surprised by the arrival of Senegal, which is a West African country like Côte d’Ivoire, he was especially honored by the inclusion of Cameroon, which would typically fall under the supervision of the Congo. The Council of Bishops made the decision to appoint Boni to oversee the two mission initiatives, Yambo explained. 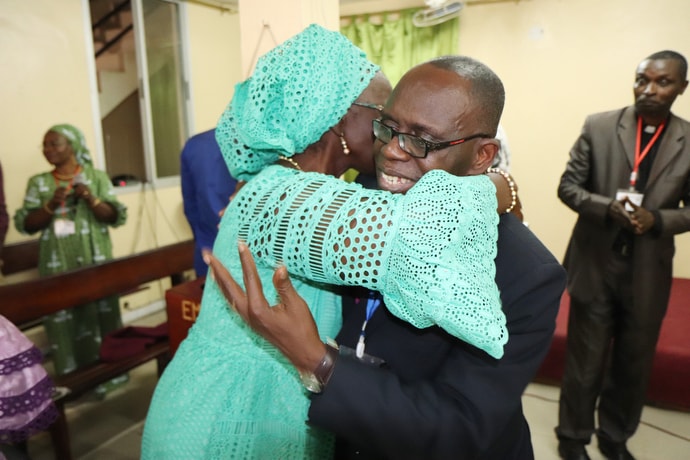 Côte d'Ivoire Area Bishop Benjamin Boni congratulates Ndeye Diouf on her retirement during the closing session of the annual assembly of West African United Methodist mission initiatives in Dakar, Senegal. Photo by Isaac Broune, UM News.
The Senegal Mission Initiative was established in May 1995 in a country that is 84% Muslim. The mission has 1,119 members spread over 21 parishes and preaching posts. Nine ordained pastors and 31 lay preachers oversee the spiritual life of the people. Its major ministries include evangelization, Christian education, health, prison ministry, literacy, agriculture and women’s activities.

“After a rocky process, the designation of Senegal as a district becomes the light at the end of the tunnel,” Yambo said. She said the mission has experienced stability and growth recently.

“In Senegal, you cannot do evangelism without projects,” he said.

Ndour was appointed the new superintendent of the Senegal Mission Initiative during the annual meeting. He said his focus would be on strengthening the current assets and focusing on evangelization and project implementation.

“Soon, we will brainstorm with the mission initiative to see what are other ways and avenues through which we can be able to support them,” Yambo promised.

The decision for the Cameroon initiative to join the Côte d’Ivoire Conference followed a petition made by a delegation from the district of Haut-Nyong, Eastern Cameroon, and was met with a thunder of applause.

Once the mission director, the Rev. Andrew Ekoka Molindo, visits the area and submits his report, the church membership will have an additional 1,400 members and assets like two hectares of cocoa farms and one palm oil plantation.

United Methodist volunteers built local temples in Cameroon. While some are struggling to resolve land issues or pay monthly rent, individuals donate fully developed churches. To date, there are 12 temples with 629 members. 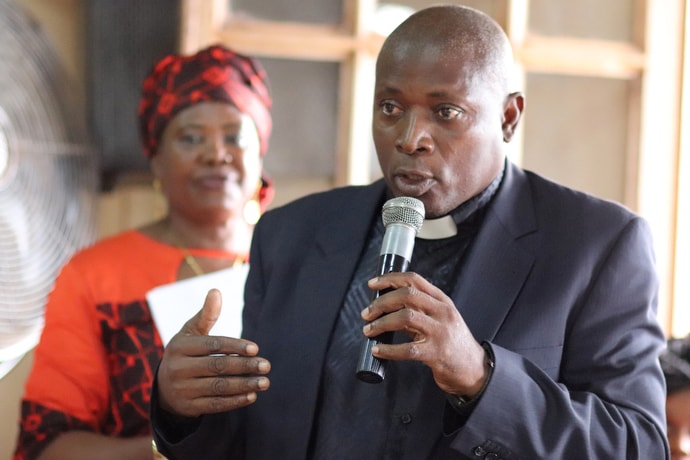 The Rev. Andrew Ekoka Molindo is director of United Methodist mission initiatives in Senegal and Cameroon, which include two hectares of cocoa farms and a palm oil plantation. Photo by Isaac Broune, UM News.
The church is making efforts, but still needs evangelism trainings and resources. Despite its small membership, the Cameroon Mission Initiative is sending missionaries to other regions of the world through the Global Mission Fellows program. Lisette Che, the national youth coordinator, will be the third missionary to be sent out.

“We are proud of what is happening because the youth of Cameroon are doing great things,” Yambo said.

Adjobi said that it was a sign that United Methodists in Cameroon are taking ownership of the missionary work.

“You have reached a status that makes you responsible of your future,” he said.

The Rev. Bernard Mbehna, mission administrator, reacted by saying: "The child is now next to a father. Every time we are with Côte d'Ivoire, we always learn something new.” He referred to times they spent with Côte d’Ivoire pastors attending seminary at the University of Yaounde.

Mbehna recalled meeting with the late Ivorian pastor Isaac Agré when they were theology students. Mbehna said he and other students were considering leaving the ministry to work in private business.

“With God, you cannot disconnect,” Agré told him one day. Mbehna said this piece of advice kept him on the ordination path.

The Rev. Ebenezer Dorairaj invited members of the Cameroon Mission Initiative to abide by their theme for the year. “To move forward, you must be transparent in sharing information and managing your finances,” he urged them.

Dorairaj promised that Global Ministries will continue to support projects as much as possible, “but it is up to Cameroon to finance their own growth,” he said. “As a pastor, I advise you to spend time in prayer and evangelization.”

The Cameroon Mission Initiative has been operational for 20 years. They expressed the need to have a nursery school, a youth center and vocational training centers to turn away from the past and look into the future with hope.

“For all the efforts made by GBGM so far, we have no right to disappoint them,” Adjobi told the leaders of the two new districts. He made the promise, on behalf of the bishop, that Côte d'Ivoire would conduct annual evaluations for them to move from the district status to provisional annual conferences and then ordinary conferences.

According to the Book of Discipline, he said, “You need to have at least 15,000 members and 15 ordained pastors to become an annual conference.”

Broune is the French News Director for UM News.

The Global Methodist Church, a theologically conservative breakaway denomination, has set May 1 as its official start date. However, it will take time for any potential separations from The United Methodist Church to take place.
General Church

The church is splintering, not splitting

Framing the denomination’s situation as a “split” suggests the church is dividing into two groups. In reality, churches are instead splintering in a variety of directions.