While working 60 hours a week helping to feed the hungry in Columbus, Ohio, the Rev. John Edgar got word that his 98-year-old mother had come down with the coronavirus.

“I couldn’t see my mother and then she got weaker and really sick,” said Edgar, executive director of Community Development for All People and the pastor emeritus for the United Methodist Church for All People in Columbus, which he founded.

Edgar and his 99-year-old father finally were allowed to see Eleanor Edgar not long before she “breathed her last.”

“I was there with my dad for about eight hours and I had to leave,” he said. “So yeah, it’s a stressful time and there’s some horrible things going on.” 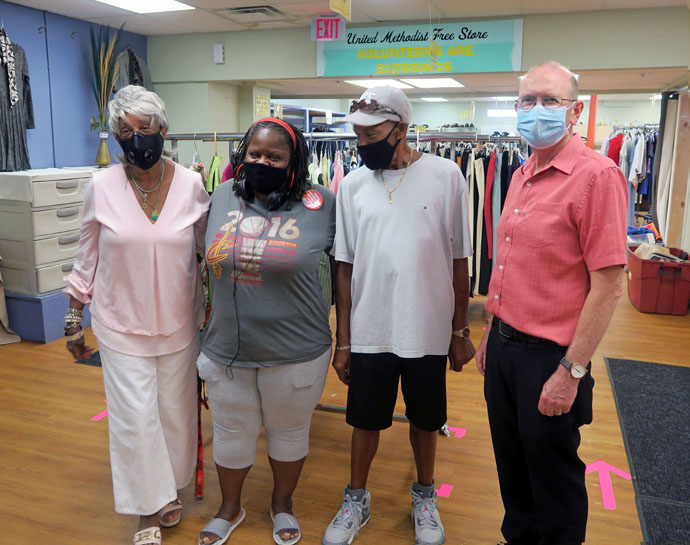 Edgar is one of many United Methodist pastors whose workload and stress level have risen as they guide congregants through not only COVID-19, but also the resulting economic downturn and issues raised by the Black Lives Matter movement. 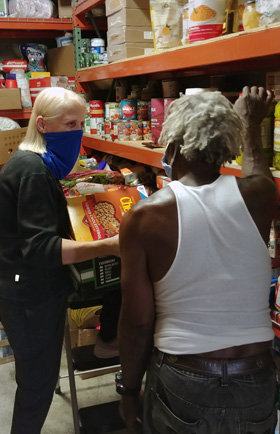 Edgar’s responsibilities includes the All People's Fresh Market, one of the top 20 distributors of free food in the U.S. There is also a free store and an affordable housing project, which is nearing the $100 million mark in its development of homes for low-income people.

“It’s not one pandemic,” she said. “It’s three. It’s the physical disease; it’s the toll it’s taking on our whole economy; and it’s the question of not only policing, but racism and anti-racism activities.”

Fowler says she works longer days than she used to, and some of it is emotionally draining. Cass Community, already accustomed to serving 700,000 meals each year, has added about 200 families a week in recent months. The center is also housing 150 homeless men, women and children and operating a free clinic for people with ongoing ailments such as diabetes, AIDS and heart disease.

In Dallas, the Rev. Sheron C. Patterson said her responsibilities have tripled.

“The workload has never been this intense,” said Patterson, senior pastor of Hamilton Park United Methodist Church. “You have to stay on the edges of creativity and adaptability and spontaneity at all times because the situation is ever changing.” 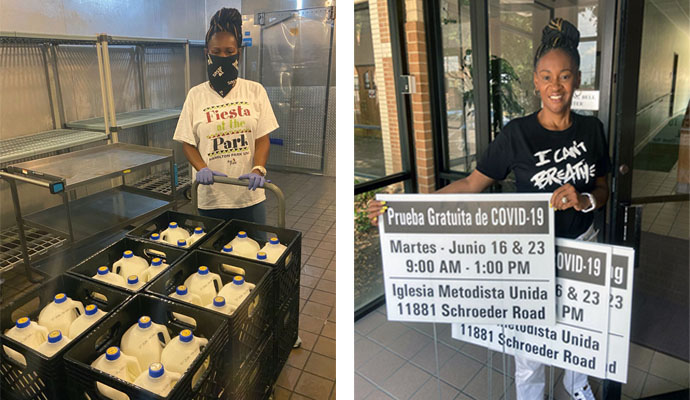 St. John's United Methodist Church in downtown Houston is distributing between 20 and 30 tons of food and supplies every week, serving more than 1,100 families. People pick up the goods while driving through, since COVID-19 makes it too risky for much personal contact.

“The unique (aspect) is the number of late-model cars that are in our line every week now, and the shock on the faces of the people driving those cars,” said the Rev. Rudy Rasmus, who shares senior pastor duties at St. John’s with his wife, the Rev. Juanita Rasmus. 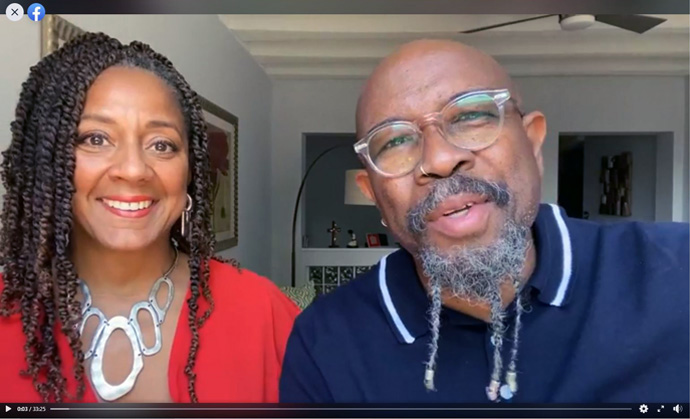 Pastors Rudy (right) and Juanita Rasmus present a Bible study live on the Facebook page for St. John’s United Methodist Church Downtown in Houston. In addition to presenting services and Bible studies virtually, the church is distributing between 20 and 30 tons of food and supplies every week to more than 1,100 families. Screengrab courtesy of St. John’s United Methodist Church by UM News.

“If you have a late-model car you probably have the credit to be able to get it, right?” he said. “So these are previously working folks who probably have not had major challenges. We have seen every race. It’s not just an ethnic minority situation.”

Patterson has added a COVID-19 testing site to her church parking lot every Tuesday.

“In the Black community, the medical community and hospitals are really viewed with distrust due to things like the Tuskegee testing,” Patterson said, referring to the Tuskegee Study, where African American men were unknowingly studied for 40 years ending in 1972 to track the progress of untreated syphilis. The men were falsely told they were receiving free health care. 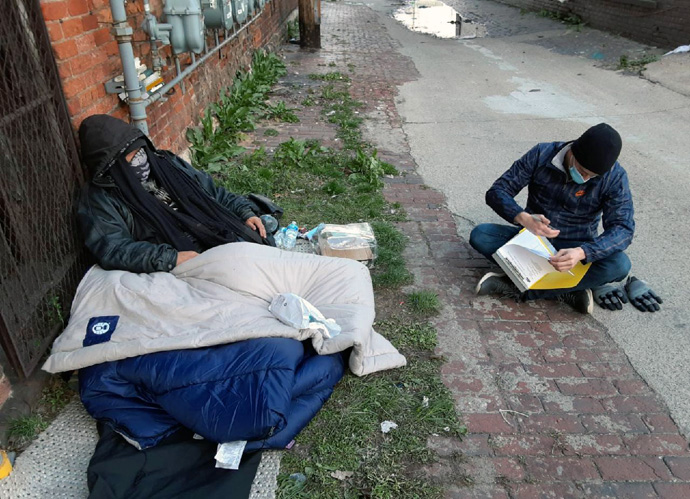 “We felt like the church hosting the COVID testing is a natural step because people trust the church,” Patterson said.

About 150 people are tested for COVID-19 each week, she said.

As with Edgar in Ohio, the staff at Cass Community in Detroit has had personal COVID-19 losses. 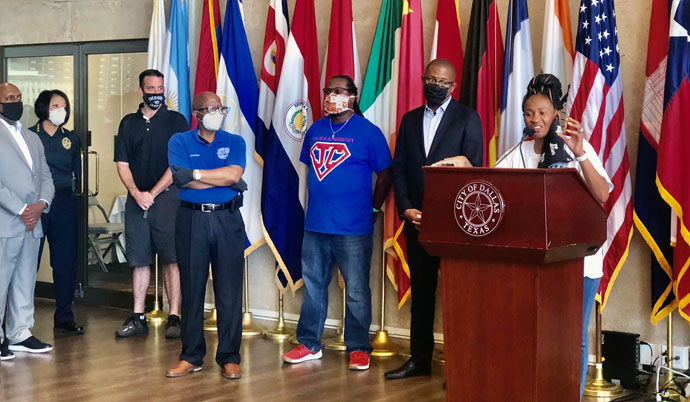 “March and April were the worst here,” Fowler said. “My (human resources) director’s mother passed with COVID and our housing specialist’s sister did, too. Neither missed a day of work.”

Fundraising is a challenge when churches aren’t meeting in person. 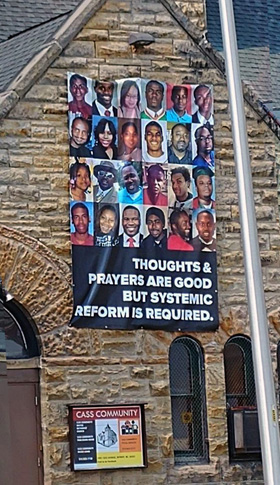 At the Dallas church, Patterson said giving was down about 65%.

“Our people are good givers, but they don’t really want to get on the computer,” Patterson said. “So they will come here and slide that tithe under the front door. … I’d say about 70 percent of our giving still comes from people who want to bring it up here and see you face to face.”

Fowler had to cancel an annual fundraising dinner, which usually brings in more than $100,000.

“We’ve done some online fundraising, and we’ve done some over-the-phone fundraising that’s actually been fairly successful,” she said. “By doing the phoning, we brought in $300,000. So people are feeling generous, they just need to know how they can help and that indeed there is still an urgent need.”

Pop star Beyoncé, whose home church is St. John’s, donated “significantly” to efforts in Houston, as did comedian Steve Harvey and Jack Dorsey, co-founder and CEO of Twitter, Rasmus said.

Despite the focus on keeping people fed and healthy, pastors can’t ignore the crisis in race relations after the Black Lives Matter effort surged following the May 25 death of George Floyd in Minneapolis while in police custody.

“I preach with a newspaper in one hand and a Bible in the other,” Patterson said. “I was happy to go down to the police station and be a part of a prayer vigil, praying that (Dallas) can make sense of what’s going on and our police can protect and serve without choking out and killing.”

Cass Community Social Services is a Detroit-based agency with a person-centered philosophy, dedicated to providing food, housing, health services and job programs. Donations can be made through the website.

Community Development for All People has worked for 20 years to transform the south side of Columbus, Ohio, into a sustainable, mixed-income community. Donations are accepted through the website.

Hamilton Park United Methodist Church in Dallas is a community of faith that, through prayer and service, strives to reach out in love to bless and care for all people. Donation options can be made through the website.

St. John's United Methodist Church in downtown Houston works to restore hope, faith and love to the community and remove the barriers of classism, sexism and racism. Donations can be made through the website.

Edgar, whose church is roughly half white and half Black, with two-thirds living under the poverty level, said that Black Lives Matter is “really important” in his church.

“It would be tragic if we do not learn from these experiences, especially … the appropriate outcry over police violence against poor people and African-American folks,” Edgar said. “I think this is God’s time for us to do more to address racial injustice and economic inequality.”

Fowler reads, walks her dog and rides her bicycle.

“For 33 years I never took a regular day off,” Fowler said. “Once the pandemic hit and I felt the weight of everything, I started taking a day a week off. It’s usually Friday.”

Patterson, a cancer survivor, recently scheduled a two-week vacation for herself. She also walks her dog, and recently took up golf.

“I’m in the bed with my dog, being real peaceful,” she said. “I’m drinking lots of water and being calm and relaxed.”

Despite the grueling pace of other duties, Rasmus thinks churches must find time to respond with “compassion and investment” to the Black Lives Matter movement.

Anywhere there’s a church, there should not be a need for nutritional food, a health clinic or a daycare for working parents, Rasmus said.

“Anywhere there’s a church there should not be a need, period,” he said. “And this is the church’s opportunity to place an investment in the community like it has never done before.”