If the Rev. Faith Fowler solved crimes instead of saving souls, she’d make a good model for a fictional female detective, the kind who quirkily gets the job done.

Fowler guzzles Diet Coke, buys her groceries at 7/11 and can wisecrack as lyrically as any Raymond Chandler character.

Here she is on her Detroit ministry’s first try at turning discarded car tires into wearable sandals:

“ … the finished product was crude: unusable rectangles with wires sticking out like Albert Einstein’s hair.”

Fowler’s candor and humor — including that line — are much in evidence in her new book “This Far By Faith: Twenty Years at Cass Community.” It’s a story-laden tour through her tenure as pastor of Detroit’s Cass United Methodist Church and executive director of its spinoff ministry, Cass Community Social Services.

The book has a champion in Mitch Albom, Detroit-based author of the best-sellers “Thursdays with Morrie” and “The Five People You Meet in Heaven.”

He gives an even better review to the 55-year-old Fowler:

“She is the most important currency of our city, a loving, egoless, inspiring leader who doesn't see color, doesn't see class, who looks at our poorest, most neglected citizens and sees only hope and opportunity.” 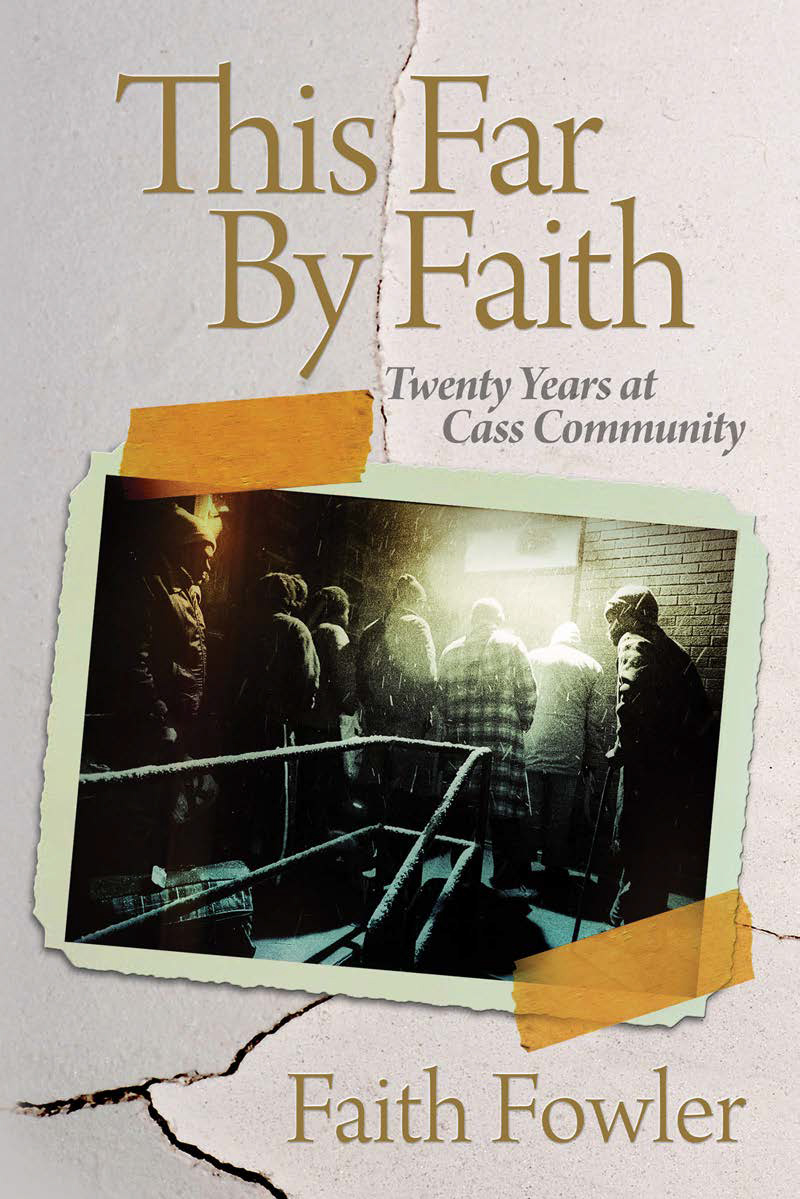 “This Far by Faith,” by the Rev. Faith Fowler, is the first book published by Cass Community Publishing House.

Cass United Methodist Church had a long tradition of social outreach before Fowler came as pastor in 1994. Under her, particularly since the creation of nonprofit Cass Community Social Services in 2002, the work has expanded greatly.

Charity — including a million meals served annually — has been paired with job training and creation.

For example, the ministry’s Green Industries program employs 85 people in such recycling innovations as making mud mats and sandals from old tires. (They figured it out.) Exercise bikes are rigged to generate electricity for those industries.

The ministry has put people to work making coaster sets and trained others through a culinary arts program.

“Although we continue to feed and clothe and shelter, we now house and employ, and are impacting the entire community and not just individuals, which is pretty fun most days,” Fowler said in a phone interview.

In the beginning, no toilet paper

As she notes in the book, Fowler can hardly get from the parking lot to her office without being asked for everything from baptisms to bus fare. So she wrote her book in the wee hours, seeking to draft or revise a chapter per night.

The book is organized by themes — mental health, food, homelessness, housing — but told almost exclusively in stories. The chapters are short, the language concrete.

It’s how she preaches.

“I’m at a church where many people don’t read, so I try to talk about things in graphic terms,” Fowler said.

The book starts with a story about Fowler’s first sermon at Cass United Methodist. All seemed to be going well until a developmentally disabled woman interrupted from the back of the sanctuary.

“Hey lady!” the woman yelled to her new pastor. “We’re out of toilet paper!”

The inauspicious beginning yields to upbeat, inspiring episodes, often with a twist. For example, in trying to find jobs for developmentally disabled people, Fowler and her staff settled on document shredding for doctor’s offices and law firms.

The workers proved dedicated, and they couldn’t read, which gave the clients confidence that confidential information wouldn’t be lifted.

Not all the stories are happy. Fowler describes a woman who seemed to have beaten addiction, but lapsed back into using and selling narcotics. She had to be evicted from Cass housing.

“There are stories in here that I’ve never told, because you don’t tell such stories on the fundraising trail,” Fowler said. “This book gives a fuller picture of the work we do. Sometimes we fail. Sometimes the people who come to us fail.”

In reflecting on her 20 years in Detroit, Fowler took inspiration from Jane Addams, a social reformer in Chicago who wrote a memoir called “Twenty Years at Hull House.”

"She did fabulous work for the long haul," Fowler said. "I think that's the key, especially in tough cities. Can you run the marathon? Just about anybody can run the sprint and do good work, but it takes a long-term commitment to understand where you are and how you can make an impact with other people."

John Wesley, Methodism’s founder, was a touchstone, too.

“Rarely is he funny, but the fact that he understood writing to be a part of his ministry in a way gave me permission,” Fowler said.

“This Far by Faith” is not only her literary debut, but that of Cass Community Publishing House, yet another new venture of the ministry.

Forthcoming titles include an essay collection by United Methodist bishops called “Fear Not: the Future Church Through the Eyes of Our Bishops,” and “Recess: Grading Work and Play at Mid-Career,” by the Rev. Laurie Haller, co-senior pastor at First United Methodist Church in Birmingham, Mich.

Out just a few weeks, Fowler’s book has sold about 1,800 copies (proceeds go to Cass Community Social Services), and she has promotional events lined up through the fall.

Already, she’s heard from women who liked the book and passed it on to their husbands, who aren’t big readers but got hooked by “This Far By Faith.”