Sitting in the 28217 ZIP code of Charlotte, North Carolina, St. Mark’s United Methodist Church is in the middle of a COVID-19 hot spot.

On June 26, St. Mark’s leaders invited Atrium Health Care COVID-19 Mobile Testing Facility to their campus. From 6 a.m. to 3 p.m. cars lined the streets around the church for free screening.

“African Americans comprise approximately 36% of the population in Charlotte, Latinos 14%. However, the (number of) COVID-19 positive cases has been higher for these two populations,” said Fernando Little, St. Mark’s music director and an Atrium Health staff member. “In addition to the disparity in positive cases, there was a glaring gap in the percentage of African Americans and Latinos being tested.”

The Atrium Health Care COVID-19 Mobile Testing Facility was set up June 26 on the campus of St. Mark’s United Methodist Church in Charlotte, N.C., in the Metro District. St. Mark’s is in one of the African American communities in Mechlenburg County. More than 250 cars got in line. Photo courtesy of the Rev. Stephanie Moore Hand, Western North Carolina Conference.
United Methodist churches have offered themselves as testing sites since near the beginning of the COVID-19 pandemic. But as testing has expanded in the U.S., the number of participating churches has picked up, with some expressly seeking to help curb the virus’ spread among minorities and other vulnerable groups.

In Beaumont, Texas, along the upper Gulf Coast, two United Methodist churches worked together to create a pop-up testing clinic.

The Rev. Tommy Williams, pastor of Trinity United Methodist Church, was pondering how to serve Beaumont in a time of COVID-19 restrictions. He also was worrying about how hard the virus was hitting racial-ethnic groups.

He approached the Rev. Rodney Graves, pastor of McCabe Roberts Avenue United Methodist Church, which is in a Beaumont neighborhood that is majority Black, with significant Hispanic population.

Their brainstorming led to the testing clinic, scheduled to go through July 2 at McCabe Roberts Avenue and done in partnership with urgent care group American Family Care.

“God put it on Tommy Williams’ heart that testing needed to take place and a good place to do it would be McCabe Roberts Avenue Church, because we’re in an area of need and we are a church that has a reputation of reaching out into the community,” Graves said.

Graves characterized the response as “tremendous,” with 40 to 50 people a day arriving for appointments to get tested — twice what he expected. 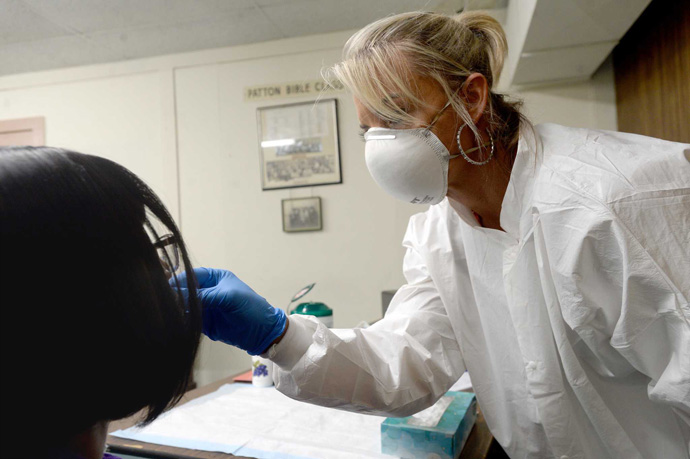 At Cochran Chapel United Methodist, cars began lining up at 6:30 a.m. on June 29 for drive-through testing that wouldn’t begin for another two-and-a-half hours, Lewis said.

The same kind of scene happened June 26 at The United Methodist Church of the Resurrection, in Leawood, Kansas. It’s the largest church in the denomination in average worship attendance, and in a solidly suburban area.

But its partnership with surrounding Johnson County in providing free testing brought a diverse crowd, and a big one. Some 1,400 people were tested in two hours as hundreds of cars weaved through the mega-church’s campus.

“They ran out of tests,” said Cathy Bien, communications director for the church.

In The Villages, a Florida retirement community, New Covenant United Methodist Church is a COVID-19 testing site. Older people are especially vulnerable to the coronavirus, and they’re mostly the ones who have been arriving at the church to be screened, said the Rev. Harold Hendren. 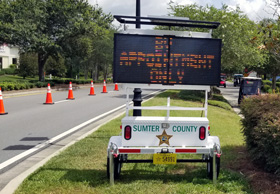 In The Villages, a Florida retirement community, New Covenant United Methodist Church is a COVID-19 testing site. Older people, who are especially vulnerable to the coronavirus, have been the majority of those coming to be screened. Photo courtesy of New Covenant United Methodist Church.
He credited Anne Foote Hill, the church’s director of administration, for working closely with Sumter County Health Department officials to make the drive-through testing happen.

The church is on track to host more than 1,200 area residents for testing over a four-day period.

“This is just another way of living into our vision statement to be the hands, feet and voice of Jesus Christ,” Hendren said.

Forest Chapel United Methodist Church, in Cincinnati, made its debut as a free testing site July 1, working with state and local authorities, including the Ohio National Guard.

“The visibility of Forest Chapel United Methodist Church has grown so much over the past seven years that when a community partner is needed, Forest Chapel immediately springs to mind,” said the Rev. Kabamba Kiboko, pastor.

She added that people began arriving at Forest Chapel before 9 a.m. for testing that didn’t begin until 1 p.m. By day’s end, 941 screenings had been performed.

At St. Mark’s in Charlotte, community members got COVID-19 testing, but they also were able to connect with food pantries, primary care services and other programs aimed at addressing social and health disparities.

“St. Mark’s is delighted to partner with Atrium Health Systems to provide space and shift resources toward closer proximity to our neighbors who have less access,” said the Rev. Otto Harris, lead pastor of St. Mark’s.

At St. Mark’s and other United Methodist churches serving as testing sites, church staff and church members are sometimes among those standing in line.

Leah Steadman, director of St. Mark’s Child Development Center, wanted to be tested to do her part.

“The thought of me being asymptomatic and spreading the virus scares me,” she said.