The Wesleyan Covenant Association will stick around to help congregations that want to leave The United Methodist Church.

That message was shared early and often as the WCA met May 6-7 outside Indianapolis, drawing roughly 1,000 in person and about as many at simulcast locations.

The WCA took the lead in the creation of a new traditionalist Methodist denomination, the Global Methodist Church, which formally began May 1.

“The WCA is like a proud parent,” said the Rev. Carolyn Moore, who chairs the WCA’s Global Council. 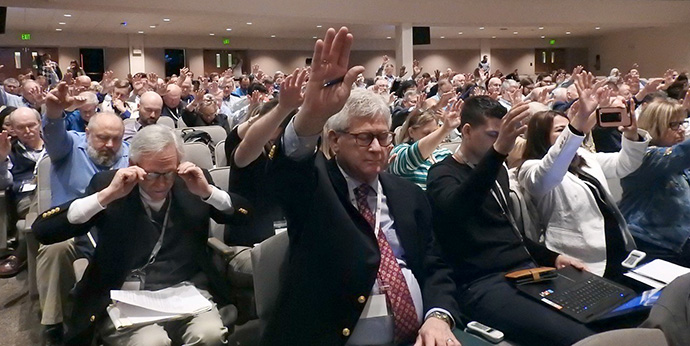 Attendees of the Wesleyan Covenant Association’s May 7 Global Gathering lift their hands as they pray for the WCA’s leaders. Photo by Sam Hodges, UM News.

But Moore and other WCA leaders insist their group still has purpose in pushing for traditionalist churches — progressive ones, too — to have an easier path for departing The United Methodist Church.

“The WCA will continue to advocate for fair and gracious ways for local churches to discern their future and to act upon that discernment,” said the Rev. Keith Boyette, WCA president.

The WCA will go forward without Boyette, its first and only president. He’s leaving to become the top staff person at the Global Methodist Church.

The WCA’s Global Legislative Assembly elected the Rev. Jay Therrell, who has made news as leader of the WCA’s Florida Chapter, to succeed Boyette.

“I am humbled and honored to follow someone I admire as a great leader,” Therrell said after the May 6 vote.

For decades, The United Methodist has experienced internal division over theology and Christian practice, particularly how accepting to be of homosexuality.

The WCA formed in 2016 as an unofficial traditionalist advocacy group within The United Methodist Church, joining Good News, the Confessing Movement and others in the Reform and Renewal Coalition. Those groups have worked to maintain the denomination’s bans on same-sex weddings and the ordination of self-avowed practicing homosexuals.

The traditionalists prevailed at a special 2019 General Conference, with delegates not only retaining but also reinforcing those bans. But the relatively close vote (438 delegates in favor and 384 against) and contentious aftermath — including protests and stepped-up disobedience of church law in the U.S. — only underscored the denomination’s divisions.

Boyette proved a key player as a diverse group of United Methodist leaders came together to negotiate the Protocol of Reconciliation and Grace Through Separation, unveiled in January 2020. The plan called for traditionalists leaving to form their own denomination, getting $25 million in United Methodist funds to begin. It spelled out the terms under which local churches and even annual conferences could leave.

But the pandemic has caused three postponements of the General Conference originally set for 2020. It’s now set for 2024.

Without approval by that legislative body, the protocol remains just a legislative proposal.

The transitional leadership of the Global Methodist Church announced in March, with the backing of the WCA, that the new denomination could not wait until 2024 and would formally launch on May 1. 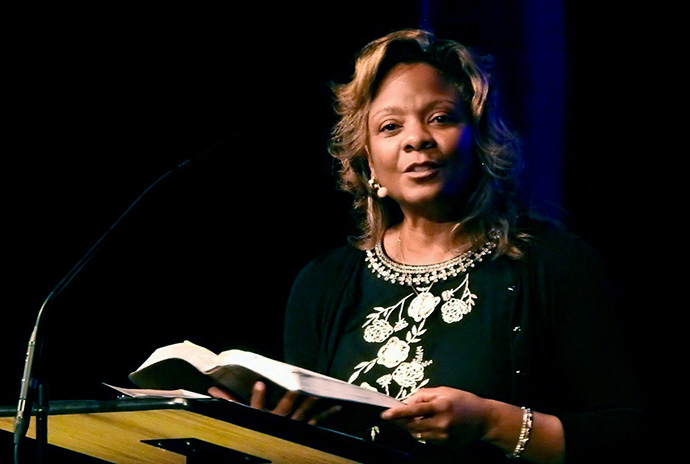 The Rev. Angela Pleasants preaches at the May 7 Global Gathering of the Wesleyan Covenant Association. Pleasants, who serves as the WCA’s vice president for clergy and church relations, has withdrawn from The United Methodist Church and is among the first clergy members of the new Global Methodist Church. She will be joining that denomination’s staff. Photo by Sam Hodges, UM News.

They included Boyette, who resigned from the Virginia Conference and moved his ordination to the Global Methodist Church, and the Rev. Daniel Topalski of Bulgaria.

Topalski was greeted as a hero for leading the Bulgaria-Romania Provisional Annual Conference to an April 1 vote to disaffiliate from The United Methodist Church — an action that United Methodist Bishop Patrick Streiff, the conference’s episcopal leader, said violated church polity.

“It’s an honor for me to be recognized as the first presiding elder,” he said in an interview. “It’s also a great burden, because at the moment we really need to figure out how to continue our ministry.”

Topalski added that the conference had received considerable and much-appreciated financial support from the United Methodist Central Conference of Central and Southern Europe but felt it belonged theologically with the Global Methodist Church.

The pace of disaffiliations from The United Methodist Church has quickened in recent years, but exactly or even approximately how many have joined the Global Methodist Church in its early days was not revealed at the WCA meeting.

“We have some clergy and some churches, but it would not be appropriate for us at this point to share those kind of numbers,” Boyette said in an interview. “It’s not representative at all of who the church is and where it’s going.”

Boyette did say the new denomination is incorporated in Texas and will operate virtually with its small, scattered staff. The mailing address is in Fredericksburg, Virginia, where Boyette lives.

“We will now focus our efforts on helping individuals and local churches navigate this season of uncertainty in The United Methodist Church,” he said in a May 7 address.

That uncertainty is being felt by some of the speakers at the WCA gathering. The Rev. Erik Grayson gave a well-received sermon on May 7, but afterward said he is not yet committed to joining the Global Methodist Church. He’s pastor of Aldersgate United Methodist Church in North Charleston, South Carolina, and begins a new pastoral appointment within the South Carolina Conference this summer.

Grayson shared in his sermon about his call to ministry and said in an interview that he’s waiting for divine direction about whether to change denominations.

“Until I hear that voice calling me to that next thing, I will remain faithful to my (United Methodist) vows,” he said.

The Rev. Robert Zilhaver led the singing of hymns at the WCA’s May 6 Global Legislative Assembly. He’s still a district superintendent in the Western Pennsylvania Conference of The United Methodist Church.

“I believe I’m going to retire out of The United Methodist Church,” said Zilhaver, 60. “I will work wherever I can for these (traditionalist) values.”

Zilhaver added that he strongly supports the WCA continuing, in part, so traditionalists remaining in The United Methodist Church “will not feel abandoned.”

Giving the closing devotional and presiding over communion at the WCA gathering was Bishop Mark Webb of The United Methodist Church’s Upper New York Conference. He told UM News two years ago that if the protocol was approved, he intended “to follow God’s call upon my life and be a part of the formation of a global traditional expression of Methodism.”

Moore introduced Webb at the WCA meeting, saying, “Maybe not geographically, but at the heart level, where it counts, you are our bishop.”

But with the protocol yet to be approved, Webb said in an interview that his denominational future is unclear. 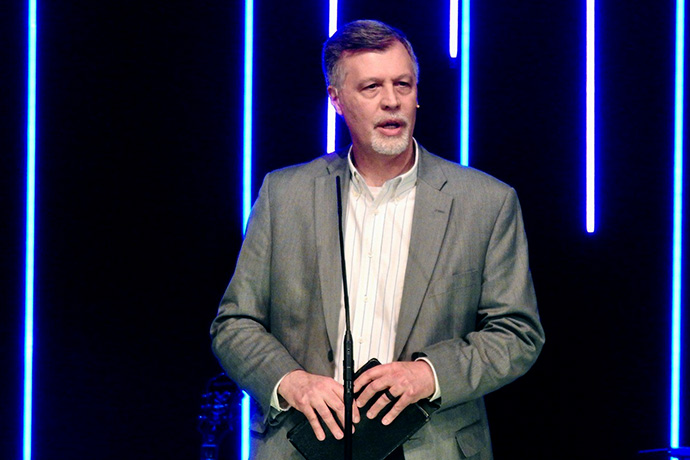 The WCA meeting was largely free of rhetorical jabs at The United Methodist Church, but Boyette did bring up the repeat delays of General Conference. He and other traditionalists have disputed the decision by the Commission on the General Conference that the pandemic presented extraordinary problems for international delegates getting visas to come to a U.S. meeting.

Boyette noted from the podium — again to loud applause — that WCA delegations from Zimbabwe and Congo were present and had been able to obtain visas on fairly short notice.

Among those attending from Zimbabwe was Simon Mafunda, the WCA’s Africa coordinator.

“I am absolutely convinced it was workable,” he said of the plan to hold General Conference later this year.

WCA delegates approved resolutions celebrating the start of the Global Methodist Church and urging United Methodist bishops, annual conferences and conference boards of trustees to adopt “fair and gracious” exit pathways for local churches. The group also approved resolutions proposed by the WCA’s Task Force on Sexual Holiness, Wholeness and Brokenness and its Task Force on a Catechism for the Global Methodist Church.

Most of the May 7 meeting was for fervent preaching, praying and hymn singing, with Moore serving as emcee. Moore is from Georgia, and she got a laugh-filled roar of approval with her reference to a Georgia-based restaurant chain.

“In the gospel according to Waffle House,” she said, “you are scattered, smothered, covered and washed in the blood of the Lamb.”