Before last month’s special called General Conference in St. Louis, the Rev. Mitchell Boone had participated in same-sex weddings, but he hadn’t violated the United Methodist Book of Discipline by performing one.

He’s willing now, despite the risk of getting charged under church law. The denomination’s top lawmaking assembly’s vote to continue bans on same-sex weddings and ordination of gay clergy— and strengthen enforcement— pushed Boone to a new place.

“My commitment to a fully inclusive church will not waver going forward,” he wrote to the church he leads, Dallas’ White Rock United Methodist Church.

By a vote of 438-384, General Conference delegates adopted the Traditional Plan, and resistance to that vote continues. It’s taking different forms and drawing in people who haven’t spoken out before.

Among those watching the drama unfold have been United Methodists with a history of defying official restrictions on LGBTQ participation.

Traditionalist-minded pastors, such as the Rev. Chris Ritter, are observing, too. Ritter’s website tracking the fallout from General Conference has received about 100,000 hits in March, he said. 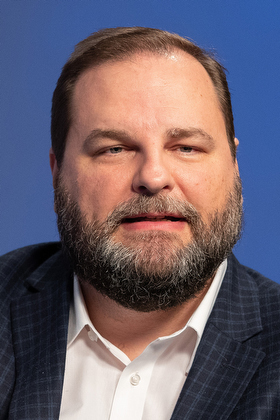 “I believe we are watching the stages of grief play out before our eyes in the reaction of our brothers and sisters who wanted to see church teachings changed,” Ritter said.

Resistance to the Book of Discipline has long been pronounced in the Western Jurisdiction— where the Rev. Karen Oliveto, a lesbian married to another woman, was elected bishop in 2016. Now that resistance is spreading to other parts of the U.S. as well as to Europe.

In the Iowa Conference, more than 1,100 clergy and laity signed a statement lamenting the harm done to LGBTQ people by the General Conference action and promising they will to no longer abide by the restrictions on ordination and same-sex weddings.

Clergy signees specifically said “we will take the authority to perform marriages, with respect to our consciences and not to the Book of Discipline.”

The Rev. Katie Dawson, a General Conference delegate and one who has worked often with traditionalist clergy and laity on denominational committees and boards, added her name.

“As I have listened to a number of folks who are most harmed by our current legislative stance in the Book of Discipline, I keep hearing that silence is complicity,” said Dawson, pastor of Immanuel United Methodist Church in Des Moines. “I feel I can’t be silent anymore.”

In Raleigh, North Carolina, the Rev. Jason Butler announced his willingness to do same-sex weddings. He’s also organized a petition drive of North Carolina Conference clergy and laity asking Bishop Hope Morgan Ward and her cabinet to stand with them in resisting implementation of the Traditional Plan.

“We want to build power, relational power, to create a movement that puts pressure on the leaders of our conference to publicly stand against this and refuse to implement its rules,” said Butler, pastor of Open Table United Methodist Church.

More than 300 clergy in the Michigan Conference signed a letter to their episcopal leader, Bishop David Bard, saying they will not abide by LGBTQ-related restrictions in church law. The letter also urged that the conference’s Board of Ordained Ministry recommend qualified candidates for ministry regardless of sexual orientation. 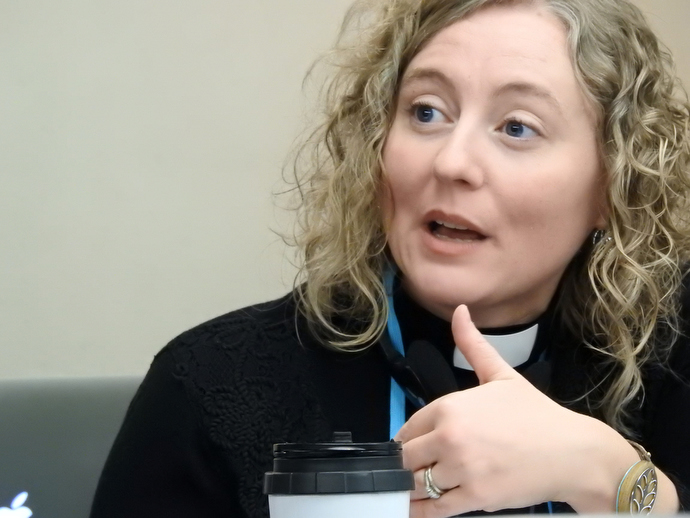 The Rev. Katie Dawson is among a group of Iowa Conference clergy saying they are willing to perform same-sex weddings despite a church law ban. Photo by Sam Hodges, UMNS.

Clergy and laity of the Wisconsin Conference drafted their own letter, titled “Sacred Resistance and Call of Action.”

At Dallas’ Northaven United Methodist Church — long a part of the Reconciling Ministries Network that has tried to change church restrictions on LGBTQ participation — the Rev. Marti Soper shared a nine-part response to General Conference.

Along with covering “United Methodist” on the church’s sign, Northaven has chosen to place in escrow its apportionment funds. She said a church committee will review the decision in May.

King Avenue United Methodist Church in Columbus, Ohio, another Reconciling Ministries Network congregation, also has put its apportionment payments into escrow. The Rev. John Keeny, pastor, said it was a protest of General Conference but also a response to frustration in the congregation.

“Every General Conference we lose members, we lose pledges with the exclusionary language of the Discipline,” he said. “This year it was pretty clear that unless we did something we would lose more persons and more pledges.”

In the Great Plains Conference, the Rev. John R. Collins drafted a resolution  for the upcoming annual conference gathering, calling for no funds to be expended for background investigations, complaints, just resolutions or clergy trials related to LGBTQ ordination or marriage.

He started a petition in support of the resolution and collected about 350 signatures over a few hours.

“We’ve had people from other conferences ask to borrow the (resolution) form, so I’m encouraged by that,” said Collins, who with his wife, the Rev. Jennifer Collins, leads First United Methodist Church in Abilene, Kansas.

A petition drive in Norway calls for creation of a committee to explore how LGBTQ United Methodists there can have full equality in marriage and ordination, even if that might mean, as a last resort, the Norway Conference leaves the denomination. The effort was inspired by similar action by United Methodists in Denmark, said Ole-Einar Andersen, a lay member in Trondheim, Norway. 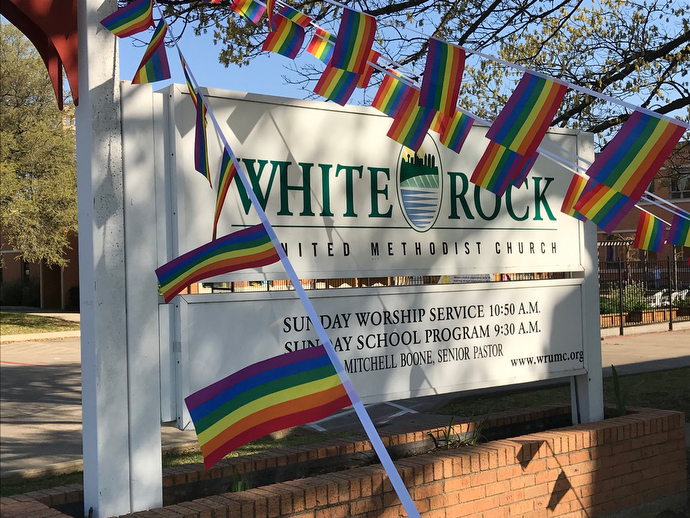 Rainbow flags fly from the sign at White Rock United Methodist Church in Dallas, just one indication of resistance to passage of the Traditional Plan at last month’s General Conference. The church’s pastor, the Rev. Mitchell Boone, has announced he’s willing to go against church law by performing same-sex weddings. Photo by Sam Hodges, UMNS.

The Rev. Ole Birch of Denmark estimated that 90 percent of the United Methodists in that country oppose the Traditional Plan.

“Some are sad, some are angry,” he said. “The annual conference will look at a proposal to set up a ʽCommission on a Better Way Forward’ to investigate how we can become a nondiscriminatory church inside or outside the UMC.”

Meanwhile, the executive committee of The United Methodist Church in Germany unanimously backed a statement saying that “the stipulations of the Traditional Plan are not acceptable for our church.”

Some churches in the U.S. continue to display rainbow banners or drape the “United Methodist” in their signs with rainbow materials. Hyde Park Community United Methodist Church in Cincinnati is among the latest denominational groups to take out a newspaper advertisement expressing grief to the LGBTQ community for the results of General Conference 2019.

Along with protesting, at least a few clergy unhappy with how General Conference went are exploring new futures for their churches.

The Rev. Sid Hall, pastor of Trinity Church in Austin, Texas, said he’s gotten 10 to 12 calls from United Methodist pastors eager to know about his church’s experience in dual affiliation with The United Methodist Church and the more LGBTQ-inclusive United Church of Christ.

For the Rev. Rudy Rasmus, who leads St. John’s United Methodist Church in Houston — a congregation about one-third LGBTQ — all options are on the table. He’s waiting to see if the Judicial Council again rules unconstitutional a disaffiliation or “gracious exit” plan for churches that was approved at General Conference. 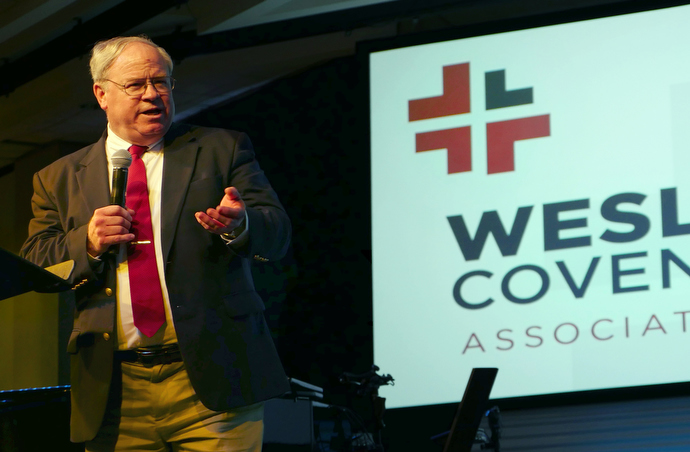 Rasmus’ specific question relates to St. John’s: “Would gracious exit apply to a now predominantly black church that historically was a white church that happens to be located on some of the most valuable land in the downtown area of the third-largest city in America?”

The Reconciling Ministries Network reports gaining 18 new churches and communities and more than 3,000 individuals since the General Conference in St. Louis.

The traditionalist Wesleyan Covenant Association has seen an “uptick” in church membership and lots of inquiries, said its president, the Rev. Keith Boyette.

“The responses that have been on the traditional side have not been of the dramatic public expression — newspaper ads and those sorts of things,” he said. “More, it’s been the conversation that occurs among people, (asking) ʽHow can we continue to be invested in a church that is this broken?’”

David Reed, Memphis Conference lay leader and chair of its General Conference delegation, is another traditionalist who thinks the St. Louis gathering and its aftermath underscore the need for considering denominational restructuring or division.

“I think I hear leaders on both sides of the conversation saying we’ve got to find a way not to continue to work in conflict with each other,” he said.

Retired Bishop Will Willimon is feeling for active bishops — most of whom supported the failed One Church Plan, which would have given U.S. churches and conferences leeway on same-sex unions and ordination of gay clergy — as they grapple with the divide.

“I hope this maybe can be seen as an opportunity and a blessing to learn what the law cannot do and only the gospels can do, and to learn that the bishop’s real authority is not the power to enforce the rules of the Discipline,” he said. “Our authority is like a pastor’s authority. It’s influential.”