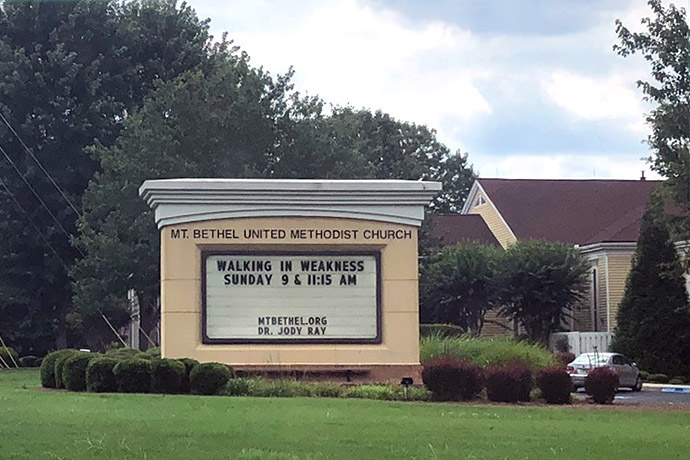 • Mt. Bethel United Methodist Church has filed a counterclaim in response to a lawsuit by North Georgia Conference trustees.

• Attorneys for the megachurch argue that the conference has blocked congregational efforts to disaffiliate and orchestrated strife over pastoral appointments.

• The North Georgia Conference says that the congregation’s leaders have chosen a “legally untenable” path.

Mt. Bethel United Methodist Church has filed a counterclaim in response to a lawsuit filed by North Georgia Conference trustees.

In the legal filing, attorneys argue that conference leadership is blocking efforts by the Marietta, Georgia, congregation to disaffiliate under denominational law and is instead seeking to retain church property.

Conference leaders “orchestrated a pastoral conflict with Mt. Bethel, and then proclaimed a sham ‘closure’ and take-over of the local church,” the counterclaim says.

The church is asking for the court to direct the conference to let the church vote on disaffiliation and is seeking further damages determined by a jury.

“Mt. Bethel is therefore entitled to recover compensatory damages, including special and general damages, in an amount to be proven at trial,” the countersuit said.

“The path that Mt. Bethel’s leaders have chosen is both legally untenable and also very damaging to the mission and ministry of the church,” the communications office told United Methodist News. “We look forward to a swift resolution of these issues in the Cobb County Superior Court.”

The conference board of trustees filed a lawsuit Sept. 8 seeking the transfer of assets and property. The conference argued that Mt. Bethel’s actions violated the Book of Discipline, the denomination’s governing document, and breached fiduciary duties.

The North Georgia Conference is the largest such regional body in the U.S. in terms of membership, encompassing nearly 800 churches and 350,000 United Methodists. By some counts, Mt. Bethel is the conference’s largest church.

The feud between the conference and congregation first became public in April, when Mt. Bethel’s leaders refused the reappointment of their senior pastor to a new conference position.

Instead, Jody Ray — the church’s senior pastor since 2016 — announced that he was surrendering his clergy credentials, and church lay leaders said Ray would stay on as lead preacher and chief executive officer.

At the same press conference, church leaders announced the congregation’s intent to disaffiliate from The United Methodist Church.

But the congregation’s lawsuit argues that the church’s plans were clear before April.

The United Methodist Church and its predecessors have maintained a policy since 1797 that all congregations hold property “in trust” for the benefit of the entire denomination.

In practice, this means churches can acquire and sell property but only if in line with the denomination’s mission and disciplinary procedures and safeguards. Often, conferences end up as enforcers of the denomination’s trust clause, with some cases like this one ending up in court.

However, the special General Conference in 2019 added a new process to the Book of Discipline for churches to exit the denomination and retain church property. The North Georgia Conference presented how it will execute that process in June at its annual conference session. Churches may only avail themselves of this process until Dec. 31, 2023, and Mt. Bethel's counterclaim argues that adds urgency to the court case.

One step the Discipline’s process requires is approval of disaffiliation by at least a two-thirds majority of a congregation’s professing members present at the vote. Such a vote must be held in consultation with the congregation's district superintendent — a member of conference leadership.

Mt. Bethel’s counterclaim says its 50-member administrative council unanimously voted to disaffiliate but that its district superintendent and bishop have since stalled a congregation-wide vote.

The disaffiliation process includes more than a congregational vote, which the lawsuit acknowledged.

A church’s annual conference also must ratify the exit by majority vote. A church exit also comes with a sizable price tag.

Departing congregations must pay two years’ worth of apportionments — shares of church giving that support ministry beyond the local church. But for an exiting church, the biggest cost will likely come from what its conference determines is a fair share of unfunded clergy pension liability — that is, what conferences will owe retirees.

Mt. Bethel’s lawsuit said the congregation’s lay leader began inquiring about what the church’s share of pension liability would be on March 31 — before the bishop notified Ray of plans to appoint him to a new position with the conference.

The United Methodist Church works on a system of itinerancy — meaning clergy go where their bishops appoint them.

Mt. Bethel’s leaders filed complaints under church law against Bishop Haupert-Johnson, arguing that she did not follow the proper consultation process in Ray’s reappointment. Leaders with oversight over bishops in the Southeastern Jurisdiction, which encompasses North Georgia, have since dismissed these complaints with the conclusion that Haupert-Johnson complied with church law.

In the meantime, Mt. Bethel leaders initially declined office space to its new pastor, the Rev. Steve Usry, and set his pay at the conference’s minimum salary.

“We believe that the appointment of Rev. Dr. Steven Usry was made lawfully and should be allowed to take effect, regardless of how much some of us may like Jody Ray and would have preferred to keep him,” Donna LaChance, one of the group’s members, told United Methodist News.

“We believe there is no rush to disaffiliate, since the newly appointed pastor shares our traditional theology. We can and should engage the entire congregation in a robust discussion about the pros and cons of the affiliation choices ahead of us.”

She said the Friends of Mt. Bethel UMC also takes issue with many statements in the Mt. Bethel counterclaim. But at this point, the group expects the errors they see to be addressed in the lawsuit.

The dispute comes at a time when The United Methodist Church itself appears heading for a split.

The coming General Conference, the denomination’s top legislative assembly, faces multiple proposals for a church divide after decades of debate over the status of LGBTQ people in the church.

The widely endorsed Protocol of Reconciliation and Grace Through Separation, if adopted, would allow traditionalist churches and conferences (those that support restrictions on gay marriage and ordination) to leave with church property at no cost as well as $25 million to start a new denomination.

Mt. Bethel is part of the Wesleyan Covenant Association — a theologically conservative advocacy group that is working to start that new denomination, the Global Methodist Church.

The congregation’s lay leader is on the WCA’s leadership council, and the Rev. Keith Boyette, the WCA’s president and a lawyer, is one of Mt. Bethel’s attorneys in the current court case.

Since the protocol was introduced, the COVID-19 pandemic has twice pushed back General Conference. The legislative assembly, which draws delegates from four continents and multiple time zones, is now scheduled for Aug. 29-Sept. 6, 2022, in Minneapolis.

Organizers named the values that will guide their decision on whether the denomination’s legislative assembly goes forward as scheduled.
Mission and Ministry