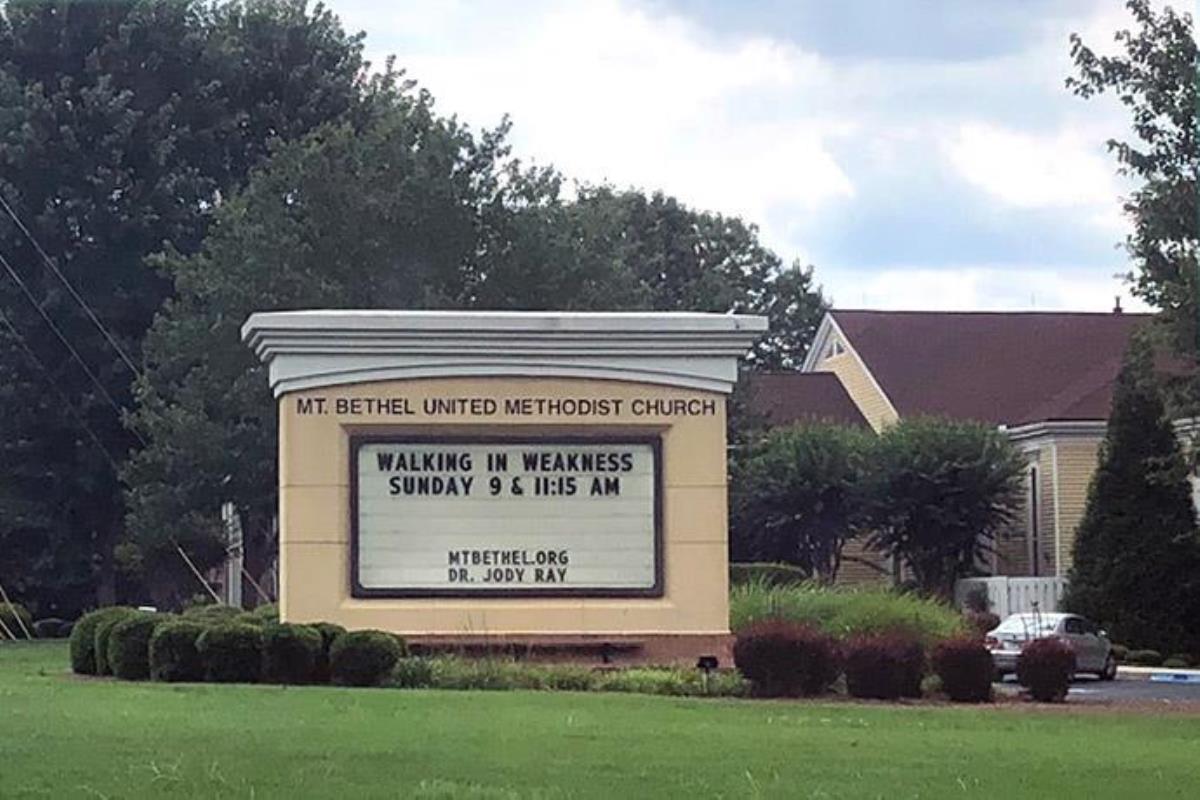 The North Georgia Conference is suing Mt. Bethel Church after attempts at mediation failed. The suit is seeking that the court require the transfer of all assets to the conference. Photo by Wendy Parker, East Cobb News.

• After a failed attempt at mediation, the North Georgia Conference trustees have sued Mt. Bethel United Methodist Church seeking the transfer of assets and property.

• The legal action comes amid a monthslong dispute that began after the megachurch’s leaders refused the reassignment of their pastor and instead named him CEO and lead preacher.

After a failed attempt at mediation, the monthslong dispute between the North Georgia Conference and Mt. Bethel United Methodist Church has landed in civil court.

The conference board of trustees filed a lawsuit Sept. 8 against the multi-campus megachurch in Marietta, Georgia, seeking the transfer of assets and property.

“While the Conference and its representatives have engaged in negotiations with local church officials and have made good faith efforts to resolve the issues without litigation, the current situation has not changed and it is untenable,” the conference said in a brief statement.

Mt. Bethel and its attorney did not immediately respond to messages seeking comment.

The North Georgia Conference is the largest such regional body in the U.S. in terms of membership, encompassing nearly 800 churches and 350,000 United Methodists. By some counts, Mt. Bethel is the conference’s largest church.

Casey Alarcon, the chair of the congregation's staff-parish relations committee, described the situation as an unbelievable heartbreak in a commentary published Sept. 10 by the Wesleyan Covenant Association, a theologically conservative advocacy group. She lays the blame for the strife at the feet of North Georgia Conference Bishop Sue Haupert-Johnson.

"She has tarnished our reputation by spreading rumors that our church is in 'exigent circumstances,' and hinted that our lay leadership is compromised," Alarcon wrote. "Even so, we have sought and still seek mediation as a means to reach a mutual agreement for the life of our wonderful church."

The lawsuit stems from a monthslong feud that began after Mt. Bethel’s leaders refused the reappointment of their senior pastor to a new conference position.

Instead, Jody Ray — the church’s senior pastor since 2016 — announced in April that he was surrendering his clergy credentials, and church lay leaders said Ray would stay on as lead preacher and chief executive officer.

At the same press conference, church leaders announced the congregation’s intent to disaffiliate from The United Methodist Church.

Alarcon, the Mt. Bethel leader, wrote that the congregation's 50-member administrative council unanimously voted to disaffiliate but the conference has ignored that vote. The Book of Discipline, denomination’s law and policy book, has a process for churches to exit the denomination, and the North Georgia Conference presented how it will execute that process in June at its annual conference session.

One step the Discipline's process requires is approval of disaffiliation by at least a two-thirds majority of a congregation's professing members present at the vote. However, the Mt. Bethel congregation has not yet taken that vote. Such a vote must be held in consultation with the congregation's district superintendent — a member of conference leadership.

In the meantime, the church declined to accept the appointment of a new pastor, the Rev. Steven Usry, refusing him office space and a full salary.

The United Methodist Church works on a system of itinerancy — meaning clergy go where their bishops appoint them.

Mt. Bethel’s leaders filed complaints under church law against Bishop Haupert-Johnson, arguing that she improperly handled Ray’s reappointment. Leaders with oversight over bishops in the Southeastern Jurisdiction, which encompasses North Georgia, have since dismissed these complaints with the conclusion that Haupert-Johnson complied with church law.

The bishop also appointed the Rev. Brian Tillman as conference director of inclusion and advocacy, the position Ray declined.

The conference said Mt. Bethel’s refusal of a new appointed pastor, the hiring of Ray as a lay “leader preacher/CEO” as well as other church actions violated the Book of Discipline.

About two weeks after that July 12 directive, leaders of both Mt. Bethel and North Georgia announced they were going into mediation.

In the legal filing, the conference trustees said that Mt. Bethel has breached its fiduciary duty.

Specifically, the filing says the church changed its governance structure and signed a 20-year lease to its Mt. Bethel Christian Academy without following procedures in the Discipline.

The lawsuit said Mt. Bethel has former members who wish to continue to follow Disciplinary procedure and continue the mission of The United Methodist Church.

To provide “for the spiritual guidance and pastoral care” of these former members, the filing says, “it is essential that this Court declare that all the assets are the property of the Petitioner (the North Georgia Conference).”

The United Methodist Church and its predecessors have maintained a policy since 1797 that all congregations hold property “in trust” for the benefit of the entire denomination.

In practice, this means churches can acquire and sell property but only if in line with the denomination’s mission and Disciplinary procedures and safeguards. Often, conferences end up as enforcers of the denomination’s trust clause, with some cases like this one ending up in court.

The legal dispute between North Georgia and Mt. Bethel comes as The United Methodist Church appears to be heading for its own split.

The coming General Conference, the denomination’s top legislative assembly, faces multiple proposals for a church divide after decades of debate over the status of LGBTQ people in the church.

The widely endorsed Protocol of Reconciliation and Grace Through Separation, if adopted, would allow traditionalist churches and conferences (those who support restrictions on gay marriage and ordination) to leave with church property and $25 million.

Since the protocol was introduced, the COVID-19 pandemic has twice pushed back General Conference. The legislative assembly, which draws delegates from four continents and multiple time zones, is now scheduled for Aug. 29-Sept. 6, 2022, in Minneapolis.

Do we have to choose between The UMC and the GMC? What happens if an elected delegate disaffiliates?
Local Church

Inspired by a United Methodist church in Pennsylvania, Hampden Highlands United Methodist Church in Hampden, Me., set out to do mission projects to assist its neighbors, completing 24 projects, nine more than originally planned. The New England Conference has the story.