Sarah Hassmer feared that ordained ministry was not a path she could pursue in The United Methodist Church.

Now she sees a space for LGBTQ clergy in her home denomination, and this fall, she plans to enroll in a United Methodist seminary.

She was among the LGBTQ United Methodists and their allies at Reconciling Ministries Network’s convocation who expressed hope that a proposal to separate the denomination might pave the way to end what they see as discrimination.

The Feb. 27-29 Connection 2020 convocation at Belmont United Methodist Church drew some 180 United Methodists from across the United States and a pastor from Kenya. The convocation was a time of worship, Bible study and strategizing for this May’s General Conference and its aftermath.

The denomination’s international lawmaking body will consider the proposed Protocol for Reconciliation and Grace Through Separation and other plans to split or restructure the church.

Sixteen theologically diverse leaders, working with renowned mediator Kenneth Feinberg, developed the protocol with the hope of avoiding lawsuits over property that have plagued other denominations that split over homosexuality.

The legislation allows traditionalist congregations and conferences — who oppose on biblical grounds same-sex unions and ordination of “practicing” gay clergy — to form a new denomination, while keeping their properties and receiving $25 million in United Methodist funds. Another $2 million would be available to other groups of churches that might leave.

Jan Lawrence, Reconciling Ministries Network executive director, was among the protocol negotiators. She and others who negotiated the compromise are part of groups that frequently take opposing sides at General Conference, most recently backing rival plans at the 2019 special called session of General Conference.

“I think the message for LGBTQ people and their allies in the church is one of hope because — and I said this at the end of the 2019 General Conference — there will be an inclusive expression of Methodism,” Lawrence told UM News.

“We have the opportunity now to take some huge steps in that direction — if not get all the way there — in 2020.”

Throughout the weekend, the convocation participants struck a hopeful note. At each worship service, they sang part of Charles Wesley’s famous hymn “Are We Yet Alive?” set to new music by United Methodist composer Mark Miller, one of the gathering’s worship leaders. They celebrated communion and reaffirmed their baptismal vows in a sanctuary decked with rainbow-colored banners.

The participants talked about not only their dreams for a more inclusive church but also their hopes for welcoming people who do not wish to leave the denomination but might feel like refugees if their church or conference departs.

The protocol does not force anyone to leave. “Everyone is invited,” said Helen Ryde, the network’s southeastern regional organizer and a 2020 General Conference delegate.

But, she added, those who remain United Methodist will have to be comfortable with a church that no longer has restrictions on LGBTQ people.

While the protocol legislation doesn’t outright remove the denomination’s bans on same-gender weddings and noncelibate gay clergy, it mandates a moratorium on the processing of complaints related to these restrictions while the dust settles.

That’s significant, said Hassmer, who is now a member of the Baltimore-Washington Conference. The conference’s Bishop LaTrelle Easterling was one of the protocol negotiators and has already agreed to the protocol’s request to hold complaints in abeyance.

Hassmer, who became a lawyer before going the seminary route, said she can also appreciate the work of mediation.

“Everyone had to give something, which I think is what is different than when theologically homogeneous groups put forth their own plans and then you go to General Conference where delegations sit together and they don’t have to talk to people from other delegations,” she said. 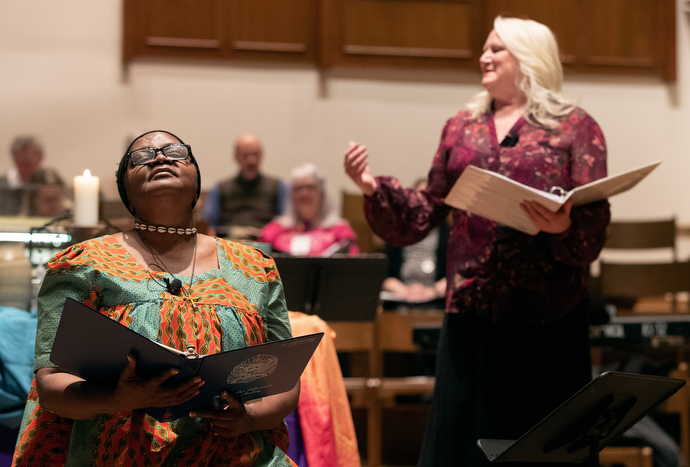 The Rev. Grace Imathiu (left) and Marcia McFee lead opening worship for the Connection 2020 gathering sponsored by Reconciling Ministries Network at Belmont United Methodist Church in Nashville, Tenn. Photo by Mike DuBose, UM News.
The protocol came about after the special 2019 General Conference voted 438-384 for the Traditional Plan, which strengthened bans on noncelibate gay clergy and same-sex unions. But those bans have faced increasing resistance in the year since, led in part by Reconciling Ministries Network.

Much of the growth took place in the southern United States, where the denomination’s LGBTQ restrictions have previously faced little pushback. Also among the churches to officially join the network last year was First United Methodist Church Moheto in Kenya — the first African church to identify as reconciling.

The Rev. Kennedy Mwita, the church’s pastor, preached at this year’s convocation. He said his church began the journey toward becoming reconciling years ago when the congregation welcomed the mother of an intersex child who had been cast out by her husband. Intersex means that a child is born with anatomy that doesn’t clearly fit the categories of male and female.

He told UM News he was excited to meet United Methodists face-to-face he had only previously connected with online.

He added that with the network’s help, he hoped to make more connections with like-minded Christians across the African continent.

Hassmer doesn’t expect change to happen overnight. More than the protocol legislation will be needed, she said, for the denomination to affirm LGBTQ people.

However, she said attending the network’s 2018 convocation already has made a profound impact on her ministry. At that year’s gathering, she heard Bishop Karen Oliveto — the denomination’s first openly gay bishop — preach.

“She served communion, and she talked about how it was wrong for people in The United Methodist Church to deny the calling of LGBTQ persons, which gave me permission to listen to God,” Hassmer said.

At this year’s gathering, Hassmer learned she was admitted to United Methodist Wesley Theological Seminary in Washington.

Oliveto preached at this year’s convocation as well.

“Why do we keep showing up and keep organizing, when this church keeps driving us to margins?” Oliveto asked those gathered.

She said she “keeps on keeping on” because this is God’s church.

“As a part of the body of Christ and as a steward of God’s church, I want others to know what it has taught me of holiness, of the sacred, of justice, of compassion and of mercy,” Oliveto preached. “I want the children who come after me to find themselves wrapped in God’s love.”