The United Methodist Church has seen a slight uptick in denominational giving so far this year.

Still, that somewhat counterintuitive development comes as an increasing number of congregations are exiting the denomination.

At its online meeting Aug. 19, the General Council on Finance and Administration board heard an update on giving as well as the potential impact of rising church departures on the denomination’s bottom line.

The board also designated proceeds from the $12.7 million sale of the finance agency’s building with an eye toward sustaining the agency’s mission of stewardship and helping stressed church leaders in uncertain times.

What’s next for the budget?

With General Conference now postponed to 2024, the process of developing a four-year denominational budget that goes before the lawmaking assembly has started over.
After the General Council on Finance and Administration finalizes 2021 statistics, next up is a multistep process to recommend a base percentage to the coming General Conference. The agency will multiply the approved base percentage by local church expenditures to determine the amount of apportionments to request from U.S. annual conferences.
The giving in the U.S. also helps determine the apportionments GCFA requests from central conferences, church regions in Europe, Africa and the Philippines. The U.S. pays the lion’s share of funds that support denomination-wide ministries. Central conferences support funding for bishops and general administration.
For now, the Judicial Council — the denomination’s top court — has ruled that until General Conference can adopt a new budget, the one passed in 2016 remains in effect. That means GCFA is still asking for apportionments based on the same formula General Conference approved six years ago.
Read General Council on Finance and Administration press release.

So far, the news on giving and disaffiliations is decidedly mixed.

Every year, the finance agency asks for apportionments — shares of church giving — to support denomination-wide ministries. The overall U.S. collection rate for those apportionments was 32.5% as of the end of July, compared to 30.6% at the same time last year. That translates to about $48 million for the first seven months of 2022, compared to $45.3 million over the same period last year.

In July alone, receipts were up 5%, compared to last year, and up 2%, compared to July 2017. In most years, apportionment collections are highest at the end of the year.

Agency staff and board members are trying to get a clearer picture of what the denomination’s financial base will look like in the near future. But a fog of unknowns clouds their view. Chief among those is just how many churches will soon no longer be part of that financial base.

“The disaffiliation issues within the church continue to expand,” said the Rev. Moses Kumar, the finance agency’s top executive. He added that the agency’s legal services department stands ready to help United Methodists in dealing with the disaffiliations under church law as well as the cases that land in civil court.

The United Methodist Church has seen a slowly growing number of churches withdraw since the turbulent 2019 General Conference in St. Louis. That gathering of the denomination’s top lawmaking body both reinforced bans on same-sex weddings and noncelibate gay clergy and opened the door for congregations to leave with property if they meet certain procedural and financial obligations.

The coming General Conference, initially scheduled for 2020, faces multiple proposals for a formal denominational separation on theological grounds. Yet after the pandemic postponed General Conference a third time to 2024, organizers went ahead and launched the Global Methodist Church on May 1 as a theologically conservative alternative to The United Methodist Church.

However, the General Council on Finance and Administration does not count any disaffiliations until annual conferences submit that data to the agency. At this point, the agency is still collecting data from 2021. 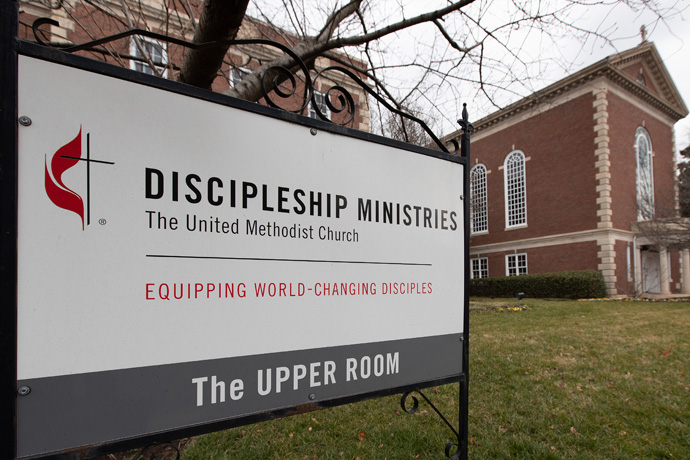 The General Council on Finance and Administration board at its online meeting Aug. 19 designated how to use proceeds from the sale of the agency’s headquarters in Nashville, Tennessee. The agency staff members are moving into the nearby Harry Denman Building, which is also home to Discipleship Ministries and the United Methodist Board of Higher Education and Ministry. Photo by Mike DuBose, UM News.

With the lag in official data, the agency is surveying U.S. conference leaders to get their best sense of the financial impact of congregational disaffiliations.

The finance agency has issued such surveys annually since 2020, most recently in July this year with 49 of the 53 U.S. conferences responding. The surveys ask conference leaders to estimate how much decline they expect in local church net expenditures. The agency defines net expenditures as what a church spends after capital expenses, apportionments and benevolent giving.

The General Council on Finance and Administration board approved adjustments to salaries for bishops and agency staff in response to two years of inflation.
The Consumer Price Index increased 8.5 percent between July 2021 and July 2022. But inflation is also a global challenge.
Based on projections from leading economists and a Payscale survey, the GCFA board voted for a 4% pay increase for all United Methodist bishops in 2023...
Read more

While net expenditures help determine the amount of apportionments requested, the Rev. Anthony Tang — a board member from the Desert Southwest Conference — asked about the impact of disaffiliations on apportionments received.

Rick King, the agency’s chief financial officer, said he performed an analysis of two conferences that published their disaffiliations after this year’s annual conference sessions. He found that the disaffiliating churches paid a significantly lower proportion of their apportionments compared to the two conferences’ churches as a whole.

“Will that hold true for all conferences? I don’t know,” King said. “That’s just two conferences I’ve looked at where that was the case. I think the financial health of local churches will also be a factor on the actual collection rates in the end. I can’t give you a guess as to what that final impact will be at this point.”

Right now, he said, churches are dealing with the rigors of inflation and the COVID-19 pandemic.

The finance agency itself is in good financial health. The agency’s income is about $7.1 million better than budget, primarily because it completed the sale of its headquarters at 1 Music Circle North in Nashville, Tennessee. The buyer is the Endeavor Real Estate Group based in Austin, Texas.

Agency staff, who are now working from home, will soon move in with the staff of Discipleship Ministries and the United Methodist Board of Higher Education and Ministry in the nearby Harry Denman Building, which also houses the frequently visited Upper Room Chapel. In the wake of COVID and reductions in staff, agencies across the denomination are consolidating space.

The agency board approved using the proceeds from the $12.7 million sale to support:

The first training event, called “Refresh. Renew. Recenter,” is a clergy wellness retreat also funded in part through a Lilly Foundation grant in conjunction with Wespath. These events will focus on spiritual, physical, mental, social and financial wellness. The agency anticipates planning more of these in partnership with annual conferences and other agencies.

“We bring a spirit of thankfulness for our local pastors who are doing the front-lines work of making disciples,” Kumar, the agency’s top executive, said in a statement. “We look forward to seeing the fruit of this and other innovative events to refresh and restore our valued clergy.”

The United Methodist Church’s pension agency is now offering retirement benefits to both the African Methodist Episcopal Church and Global Methodist Church — building closer ties in a time of upheaval.