• Discipleship Ministries and the United Methodist Board of Higher Education and Ministry have sold the jointly owned Kern Building to nearby Vanderbilt University.

• The two agencies will share offices in the Harry Denman Building, which is also home to the frequently visited Upper Room Chapel.

• The move comes as other denominational agencies are also consolidating space in the wake of the COVID-19 pandemic.

With reduced staff and more people working from home, two United Methodist agencies have sold a jointly owned building and are moving in together across the street.

Late July 15, Discipleship Ministries and the United Methodist Board of Higher Education and Ministry completed the sale of the Kern Building and adjoining property to nearby Vanderbilt University.

“We give thanks for the wonderful ministries accomplished over the years in the Kern space and we look forward to the ways in which the proceeds from this sale will support the missions of both agencies,” the Rev. Jeff Campbell, acting top executive of Discipleship Ministries, said in a press statement.

Higher Education and Ministry, the sole Kern occupant at the time of the sale, will temporarily lease space from Vanderbilt as staff move into Discipleship Ministries’ Harry Denman Building.

That building — named for the famed Methodist lay leader and evangelist who influenced Billy Graham — is also home to the beloved Upper Room Chapel. While closed to visitors at present because of COVID-19, the chapel continues to post online prayer services twice a week.

“The Kern property has served our global missions and ministries exceedingly well,” said the Rev. Greg Bergquist, Higher Education and Ministry’s top executive, in a statement.

“With an eye toward the future, and our commitment to being a more agile agency, it made sense to move toward a hybrid model where staff can embrace the adaptive opportunities of remote work while sharing collaboration space for maximizing team engagement.”

The move to the Harry Denman Building comes as other denominational agencies are also consolidating space in response to changes wrought by the COVID-19 pandemic.

The self-supporting United Methodist Publishing House, which entered a purchasing agreement to sell its campus this spring, is now sharing space with United Methodist Communications in Nashville.

The denomination’s 13 general agencies have all cut their budgets and adjusted their ministries amid the uncertainties caused by the coronavirus pandemic and potential split in The United Methodist Church.

But before anyone had heard of COVID-19, discussions of selling the Kern Building already had started. Discipleship Ministries had undergone a major restructuring in 2018 and found it had extra space. The Kern Building also was in need of renovation. 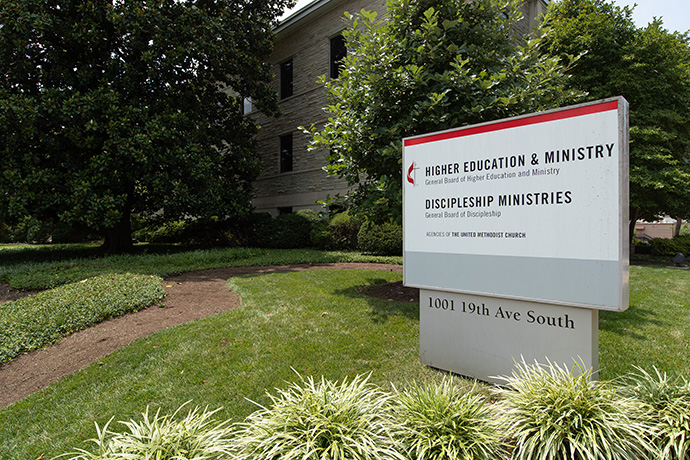 A sign outside the Kern Building shows that it has been home to both Discipleship Ministries and the United Methodist Board of Higher Education and Ministries. The two will continue to share office space in the Harry Denman Building across the street. Photo by Mike DuBose, UM News.

The Connectional Table, a denomination-wide church council, and the board of General Council on Finance and Administration, the denomination’s finance agency, gave the two church-supported agencies preliminary approval in April 2019 to explore a possible sale.

Earlier this year, the Connectional Table and GCFA board also each gave the required approval for the Vanderbilt University sale as the deal reached its final stages.

With the sale, the property goes to a university with longtime Methodist ties. Vanderbilt University was part of the Methodist Episcopal Church, South until 1914, and its divinity school continues to train United Methodist clergy.

Metro Nashville’s most recent property assessment valued the property at 1001 19th Ave. S. as worth more than $9.5 million.

The two agencies plan to use the funds from the sale for ministry needs designated by their respective boards.

“As our mission remains constant, strategies and methods change,” said Bishop Mark J. Webb, Discipleship Ministries board president and leader of the Upper New York Conference. “The proceeds from this sale will provide valuable resources for critical initiatives into the future that will support congregations and leaders in the task of equipping world-changing disciples of Jesus Christ.”

Higher Education and Ministry, whose work focuses on equipping church leaders, plans to use the funds to support long-term strategic objectives. That includes responding to emerging needs in the church, dismantling systems of racism and colonialism, forming young-adult Christian leaders and aligning ministry with the realities of the United Methodist worldwide connection.

The move is still bittersweet. The two agencies have jointly owned the Kern Building since 1950. The building bears the name of Methodist Bishop Paul Bentley Kern (1882-1953), a bishop at the time of the 1939 merger that formed the Methodist Church. During his time as bishop, he served on the Board of Education, helping to shape what was to be the ministry of both agencies.

Africa University, the United Methodist pan-Africa university in Zimbabwe, has operated its development office out of the Kern building since 1992.

Bishop William T. McAlilly, Higher Education and Ministry board president, said in a statement that the agencies look forward to responding to the new thing God is doing.

“We stand on the shoulders of those whose vision served the mission of the people called Methodists well,” said McAlilly, who also leads the Tennessee and Memphis conferences. “We now step into a new future.”

The two bodies that develop The United Methodist Church’s budget agree cuts are needed, but disagreements are brewing over stewardship in a time of mounting church disaffiliations.
Theology and Education