What does a predicted denominational split and an unpredictable pandemic mean for The United Methodist Church’s bottom line?

The General Council on Finance and Administration board grappled with that question as members revisited the denomination-wide budget that will go before the coming General Conference.

The finance agency board already was preparing to send the lawmaking assembly the lowest budget in more than 30 years. On Dec. 1, by an 18-1 vote, the board approved shrinking the proposed four-year budget even further to a total of about $407.3 million for the years 2023-2026.

That marks a cut of nearly 33% — a third — from the budget General Conference approved in 2016 to support denomination-wide ministries.

The current proposal also would be the lowest budget submitted to General Conference since 1988, according to the denomination’s Commission on Archives and History. At the time, the denomination had about 3 million fewer members than today and had yet to establish Africa University, now supported by denominational funds.

Still, board members stressed that the budget proposal remains very much a work in progress and could change further.

They are trying to get a clear picture of what the denomination’s financial base will look like in the near future — and a fog of unknowns clouds their view.

After decades of intensifying debate over LGBTQ inclusion, the coming General Conference faces multiple proposals for a denominational separation.

But no person knows how many congregations will depart if a plan of separation passes. Similarly, no one can say when the deadly pandemic will stop upending lives.

“They are projections for things we’ve never done before,” said Christine Dodson, GCFA board vice president who serves on the denomination’s Budget Advisory Team. She also is the treasurer and business manager of the North Carolina Conference.

“We don’t have data on how a pandemic and disaffiliation are going to impact our churches moving forward.”

The board does have the educated guesses by leaders of U.S. conferences, the regional bodies that provide the lion’s share of funding for denomination-wide ministries. Both in 2020 and this year, GCFA surveyed conference treasurers, bishops, district superintendents and others to get their best sense of the financial impact of congregational disaffiliations.

Based on this year’s survey, the finance agency now estimates the denomination stands to lose about 25.5% of U.S. local church net expenditures by 2025. That’s a bigger loss than projected in last year’s survey, which only asked for estimates through 2024. 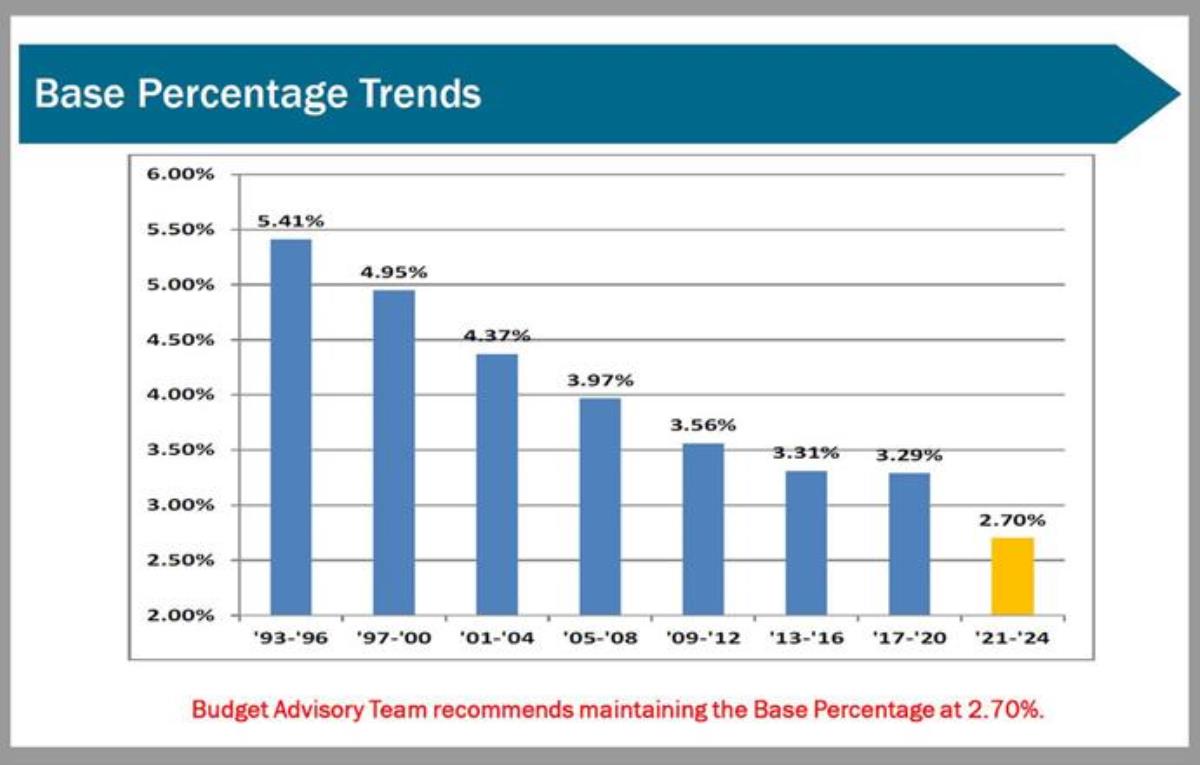 One of the charts presented during GCFA’s 2021 fall board meeting shows how the base percentage used in calculating apportionments — requested shares of church giving — has gone down since the 1990s. The GCFA board agreed with the Budget Advisory Team recommendation that the coming four-year budget use a 2.7% base percentage. Graphic courtesy of GCFA.

The survey results do not mean that conferences expect more than a quarter of U.S. United Methodist churches to depart or close during the next four years. Net expenditures can vary widely by congregation and by circumstance.

What the results do mean is that conference leaders forecast that church departures and closures will result in a substantial decline in one of the key factors used in determining the denomination’s budget.

As it stands, some churches already are leaving without waiting for General Conference to act.

GCFA reports that in 2020, 32 U.S. congregations disaffiliated from The United Methodist Church. But that represents only a tiny fraction of the denomination’s more than 31,000 United Methodist churches nationwide.

The Rev. Steve Court, GCFA board member and former director of connectional ministries for the East Ohio Conference, told the board that he thought the net-expenditure estimates might be overly negative about what the future holds.

“I just want to keep highlighting that because it has real ministry impacts about the level of cutting that we do at this point,” he said.

North Texas Conference Bishop Mike McKee, GCFA board president, agreed with Court that the estimates were far from definitive. McKee said conference leaders tend to answer the disaffiliation question very differently depending on their role.

“This is going to be very difficult to forecast,” McKee said. “I’m of the opinion that people will walk more than churches will.”

However, he added, that he does not know of any better way to make budget projections.

In addition to its work on a 2023-2026 denominational budget, the General Council on Finance and Administration board also approved the 2022 spending plans of various United Methodist ministries.
The GCFA board never expects a 100% collection rate. Conferences also have started paying out apportionments in anticipation of the reduced budget and its new allocations. With that in mind, most United Methodist agencies budgeted in 2022 for between 60 and 65% collection rates. The General Council on Finance and Administration itself budgeted for a 50% collection rate. Most agencies are budgeting for a decrease in their reserves in 2022.
During a closed session, the GCFA board also approved the sale of the finance agency’s headquarters at 1 Music Circle North in Nashville, Tennessee. Negotiations are ongoing. The agency plans to release details after the sale is finalized.
Read GCFA press release.

The board’s meeting on Nov. 30-Dec. 1 was itself emblematic of the uncertainty the group faces. Up until the day before the meeting, most members planned to be in Nashville, Tennessee, for the group’s first in-person gathering since COVID-19 shut down travel in mid-March 2020. However, rising COVID-19 cases in Nashville led the board to cancel the hybrid format and meet solely online.

The pandemic also has played havoc with General Conference, which typically takes up legislation — including the denomination’s budget — every four years. The coronavirus has twice forced the postponement of the international assembly from its original 2020 dates and has placed in doubt whether the big meeting can go forward as now planned Aug. 29-Sept. 6 in Minneapolis.

In the meantime, the Judicial Council — the denomination’s equivalent of the Supreme Court — has ruled that the budget allocations approved by the 2016 General Conference still stand until the legislative assembly approves a new apportionment formula.

With so much up in the air, the Commission on the General Conference has asked the GCFA board to give delegates the option of voting on a budget that could take the denomination through 2026.

The budget General Conference approves is apportioned to conferences, which in turn ask for apportionments — shares of giving — from their local churches.

GCFA requests apportionments from each U.S. conference based on a formula that includes its local church net expenditures, the economic strength of the conference and a base percentage approved by General Conference.

The GCFA board is asking the coming General Conference to drop the economic-strength part of the formula and substantially reduce the base percentage.

Budget planning is a multistep process, and the GCFA board’s votes on Dec. 1 represent just a start. The next step is allocations.

On Dec. 1, the GCFA board made recommendations on the distribution of two — the Episcopal Fund, which supports the bishops, and the General Administration Fund, which supports General Conference, the Judicial Council, Archives and History and the finance agency itself.

Now, it’s up to the Connectional Table, a church leadership body, to recommend allocations among the five other funds.

Under the current budget proposal, the Connectional Table has about $294.8 million to distribute among those five funds. That’s about 37% less than allocated to the five funds under the budget approved by the 2016 General Conference.

The Connectional Table plans to bring its revised allocations to a joint meeting with the GCFA board in May.

The Economic Advisory Committee, a group of United Methodist financial forecasters, will next consider updating projections in June.

Based on those projections, the GCFA board and Connectional Table usually continue to make budget adjustments up until General Conference meets.

Ultimately, General Conference has final say on the shape of the denominational budget.

Some United Methodist congregations in the U.S. return to online-only gatherings as case numbers mount.