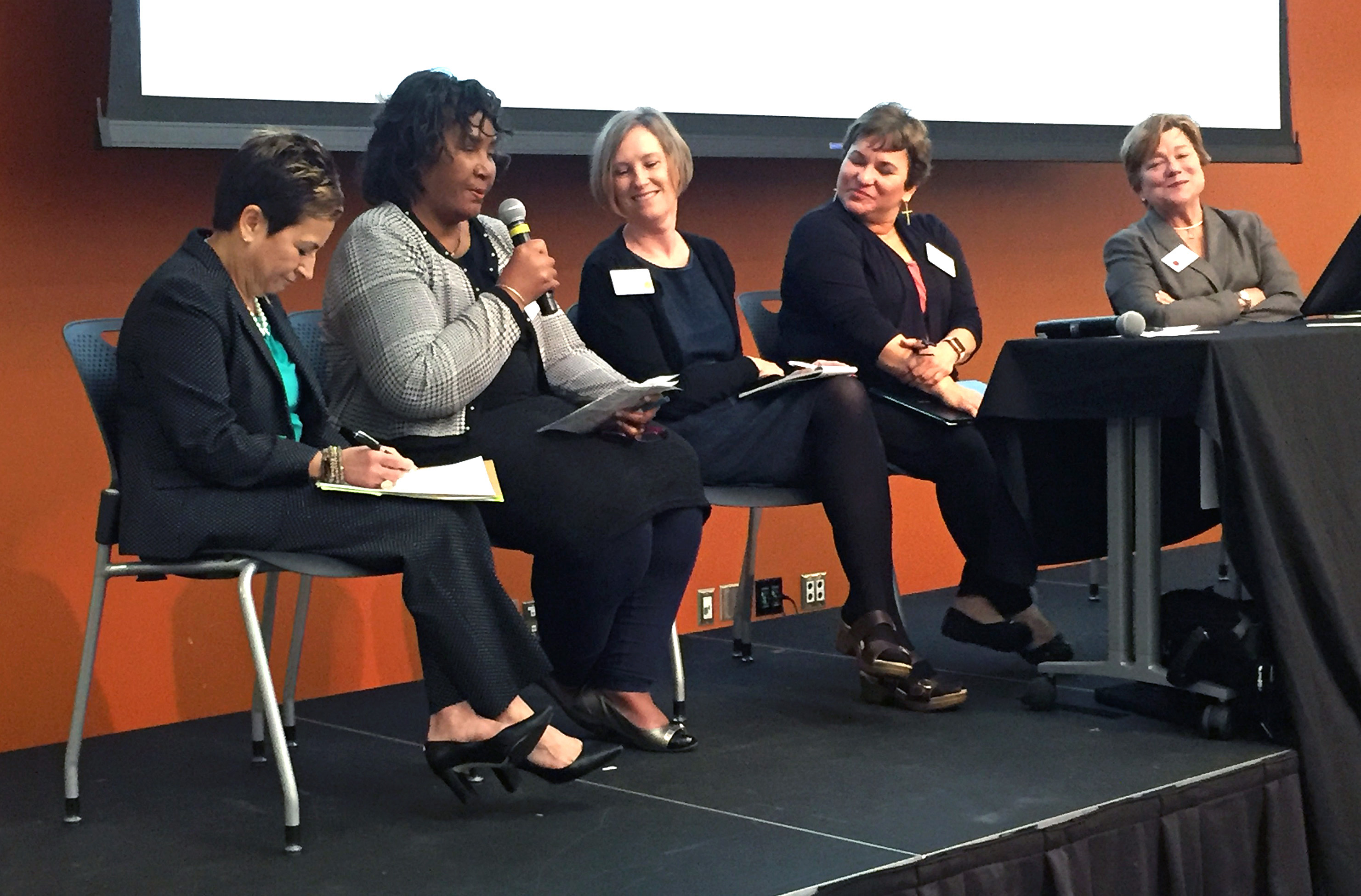 Panelists at the Nov. 2 Connectional Table meeting speak about the impact a divided church would have on fulfilling the church’s mission. Pictured from left are Bishop Cynthia Fierro Harvey, Benedita Penicela Nhambiu, the Revs. Beverly Jones, Lyssette N. Perez and Kim Cape. Photo by Heather Hahn, UMNS.
No matter what next year’s General Conference decides about the future of The United Methodist Church, agencies and other churchwide initiatives will feel some impact.

“It is untrue that this decision will not affect the agencies and their mission — it will directly,” said the Rev. Kim Cape, top executive of the United Methodist Board of Higher Education and Ministry.

She noted that about 2 cents of every dollar placed in U.S. church offering plates supports general church ministries. “Any church that leaves The United Methodist Church stops giving to that larger mission fund,” she said.

Cape was speaking to the Connectional Table, a denominational leadership body, as part of a panel on how the efforts to end the church’s decades-long dispute over homosexuality might affect the denomination’s mission.

The United Methodist Church currently bans the ordination of “self-avowed practicing” gay clergy and the blessing of same-gender unions. But in recent years, clergy and in some cases whole conferences have publicly defied these prohibitions, and the debate has some churches already heading for the exits.

United Methodist bishops have called a special session of the denomination’s top lawmaking assembly on Feb. 23-26 to try to find a way through the impasse. Under consideration will be a report by the Commission on a Way Forward, which includes three different plans for the denomination’s future, as well as any legislation deemed in harmony with the bishops’ call.

The Connectional Table, which met Oct. 31- Nov. 2 at the United Methodist Board of Global Ministries office in Atlanta, brings together 64 lay and clergy members who act as a sort of denomination-wide church council that coordinates general agencies. Cape and the other top executives of the denomination’s 13 general agencies participate in the group with voice but not vote.

Dave Nuckols, a member of both the Connectional Table and Way Forward Commission, provided an overview of the commission’s work and the impact of a recent decision by the denomination’s top court on the commission’s proposals.

The Connectional Table as a whole has not endorsed any particular plan heading to General Conference, though some individual members have done so. Instead, the group has focused on planning for the church after General Conference.

A recurring theme throughout the recent meeting was that while United Methodists do not agree on matters of homosexuality and scriptural interpretation, they can be united in the good they do together.

“United, we can help millions,” said Benedita Penicela Nhambiu, a panelist from the Mozambique South Conference.

“These millions can be children going to school. They can be women taking less time to fetch water instead of having to travel all day to fetch five gallons. They can be people being saved from killer diseases like cholera and malaria.”

Nhambiu, who oversees the Connectional Table’s work on strengthening the denomination’s global ties, distinguished between unity and uniformity. “We don’t need to be uniform to be united,” she said. “That’s part of our Methodist DNA.”

She commended the denomination’s African bishops for releasing a statement saying they do not support a plan of dissolution. The bishops’ statement also said they supported the traditional view of marriage between a man and a woman.

The Rev. Lyssette N. Perez, a panelist and Connectional Table member, also spoke of the importance of unity in her ministry.

She is the president of MARCHA, the denomination’s Hispanic/Latino caucus. During the meeting, she joined with other leaders of the denomination’s five official racial/ethnic caucuses in releasing a statement calling for unity, invoking Christ’s prayer for the church in the Gospel of John.

“The racial/ethnic ministries in the denomination could not be done without the support of the agencies,” she told her fellow Connectional Table members.

She pointed to her experience in a United Methodist church in an impoverished part of Camden, New Jersey. Because of financial support from the Greater New Jersey Conference, the church could afford a pastor, she said. And because of grants from agencies, the church could support an after-school program and a vibrant youth choir.

“In that little church, I learned what it means to be part of a global church,” she said. “All of this was done through our connection and the possibility of being in mission together by pooling our resources.”

The Rev. Beverly Jones of the New Mexico Conference oversees the Connectional Table’s work in promoting vital congregations and the denomination’s Four Areas of Ministry Focus. Those four areas are: Creating new and renewed churches, developing Christian leaders, ministering with the poor and improving global health.

Her sense is that vital congregations are those that have found a way to manage conflict.

“They either focus on what is central to their identity or they find a positive, missional vision as the place to work it out,” she said. “We know that when we are out on a work site, serve on a committee or riding in a van across the country, we begin to create more open and trusting relationships, even when we disagree.”

The fifth member of the panel was the Louisiana Conference’s Bishop Cynthia Fierro Harvey, who is not a Connectional Table member but president-designate of the Council of Bishops.

Harvey told the Connectional Table why she supports the One Church Plan, one of the Commission on a Way Forward’s proposals. That plan, if approved by General Conference, would leave questions of marriage up to local churches and individual clergy and LGBTQ ordination up to conferences.

“In my opinion, it’s the only plan that comes close to my vows of consecration,” she said.

Should the church splinter, both Cape and Harvey said they worry for such institutions as Africa University, a pan-African United Methodist university in Zimbabwe, and the Lydia Patterson Institute, a United Methodist high school on the Texas border with Mexico.

“A fractured body is weakened.” Harvey said. “We might be a valley of dry bones sooner than we think, and we know what happened to those bones. We’ve got to make them dance. I think it’s up to us here to heal that fracture and put some tendon and muscle to those dry bones.”

Accrued benefits are safe. But whatever happens in 2019, Wespath wants exiting churches to pay their fair share of pension liabilities.
Judicial Council