If The United Methodist Church had a “Paid-in-Full” stamp, it would be getting good use around the world.

A record 29 of the 56 U.S. United Methodist conferences — 52 percent  — paid 100 percent of requested general-church giving in 2017, the denomination’s General Council on Finance and Administration reports. An earlier press release from the finance agency said 28 but has since been updated.

That’s the highest number in the 18 years that the church has digital records and marks the fourth consecutive year that a record number of conferences reached the milestone — up from 25 in 2014, 26 in 2015 and 27 in 2016.

This year also marks the first time the finance agency is reporting giving from the central conferences — church regions in Africa, Europe and the Philippines — under the new central conference apportionment formula. General Conference, the denomination’s top lawmaking body, approved the formula as part of the 2017-2020 general church budget.

Those episcopal areas encompass 32 of the 80 annual conferences in Africa, Europe and the Philippines.

All told, United Methodists in 2017 gave about $133.2 million to support the general church’s national and international ministries — about $1.8 million more than the previous year.

The U.S. payout rate — that is, the percentage of requested apportionments collected — was 91.9 percent, an increase over 91.4 percent in 2016. The central conferences’ payout rate was 65 percent overall — 298 percent from Europe, 36 percent from the Philippines and 17 percent from Africa.

“We not only want to thank the people of The United Methodist Church but also praise God for their faithful witness through their giving,” said Moses Kumar, the finance agency’s top executive and treasurer, in a statement.

Apportionments are the share each conference or local church pays to support international, national and regional missions. Some conferences call the offering “ministry shares” to emphasize that the funds are investments in what the church does both at the local and global levels.

The Rev. Karen Stoffers-Pugh will occasionally ask her congregation members: Have any of you ever founded a university?

“Everybody kind of laughs, and I say, ‘Well, in fact, you have,’” said Stoffers-Pugh, the pastor of Wesley United Methodist Church in Fresno, California. “Part of your giving goes to Africa University so all of us working together founded a university in Africa.”

In addition to Africa University in Zimbabwe, general-church apportionments support bishops, ministerial education, most general agencies, general administration, and denomination-wide efforts such as the Black College Fund and ecumenical work. For 2018, the General Council on Finance and Administration recommended that general church spending plans be based on payout rates between 89 and 91 percent.

Stoffers-Pugh said members of Wesley United Methodist Church have long had a commitment to giving full apportionments. However, the church is part of a conference, California-Nevada, which just paid 100 percent of requested giving for the first time in years.

She attributes the milestone to a shift in culture within the conference and local churches. “We have gone to tithe giving,” she said. “Each church is to give 10 percent of its income to the conference, and that makes up the apportionment. We’ve been communicating that at the local-church level.” 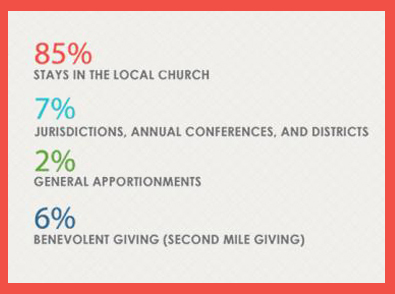 This graphic shows the distribution of offerings from the General Council on Finance and Administration. The 6 percent benevolent giving includes special offerings a church might take up such as collections for Special Sundays or Advance designated giving. Graphic courtesy of umcgiving.org

“We are blessed to be in ministry with people who support the connectional nature of The United Methodist Church,” Kumar said. “Through this faithful giving, ministries of the denomination continue to thrive.”

The Wesleyan Covenant Association took the lead in creating the new Global Methodist Church, but WCA leaders say their organization needs to keep fighting for churches wanting to leave The United Methodist Church.