The agreement reached at General Conference 2016 didn’t inspire compliance among the denomination’s regional conferences as some pledged "non-conformity" with the church’s stance on LGBTQ people.

The General Conference 2016 ended with a promise to give the denomination a couple of years to form a commission that would prayerfully consider full inclusion for lesbian, gay, bisexual, transgender and queer or questioning people in every aspect of the church’s ministry.

Several of the 2016 annual conferences within the United States said they could not wait.

The United Methodist Church declares “the practice of homosexuality incompatible with Christian teaching.” The Book of Discipline bars openly gay or lesbian people who are not celibate from being ordained or becoming bishops. The church’s lawbook prohibits officiating at or participating in same-sex weddings and annual conferences cannot fund LGBTQ programs or events.

The New England Conference was the first to approve a resolution titled “Action of Non-Conformity with the General Conference of The United Methodist Church,” which stated the conference would not comply with provisions of the denomination’s lawbook that discriminate against LGBTQ persons.

That conference was followed by the Desert Southwest, California-Pacific and Pacific-Northwest  conferences, which passed similar ‘non-conformity’ resolutions. 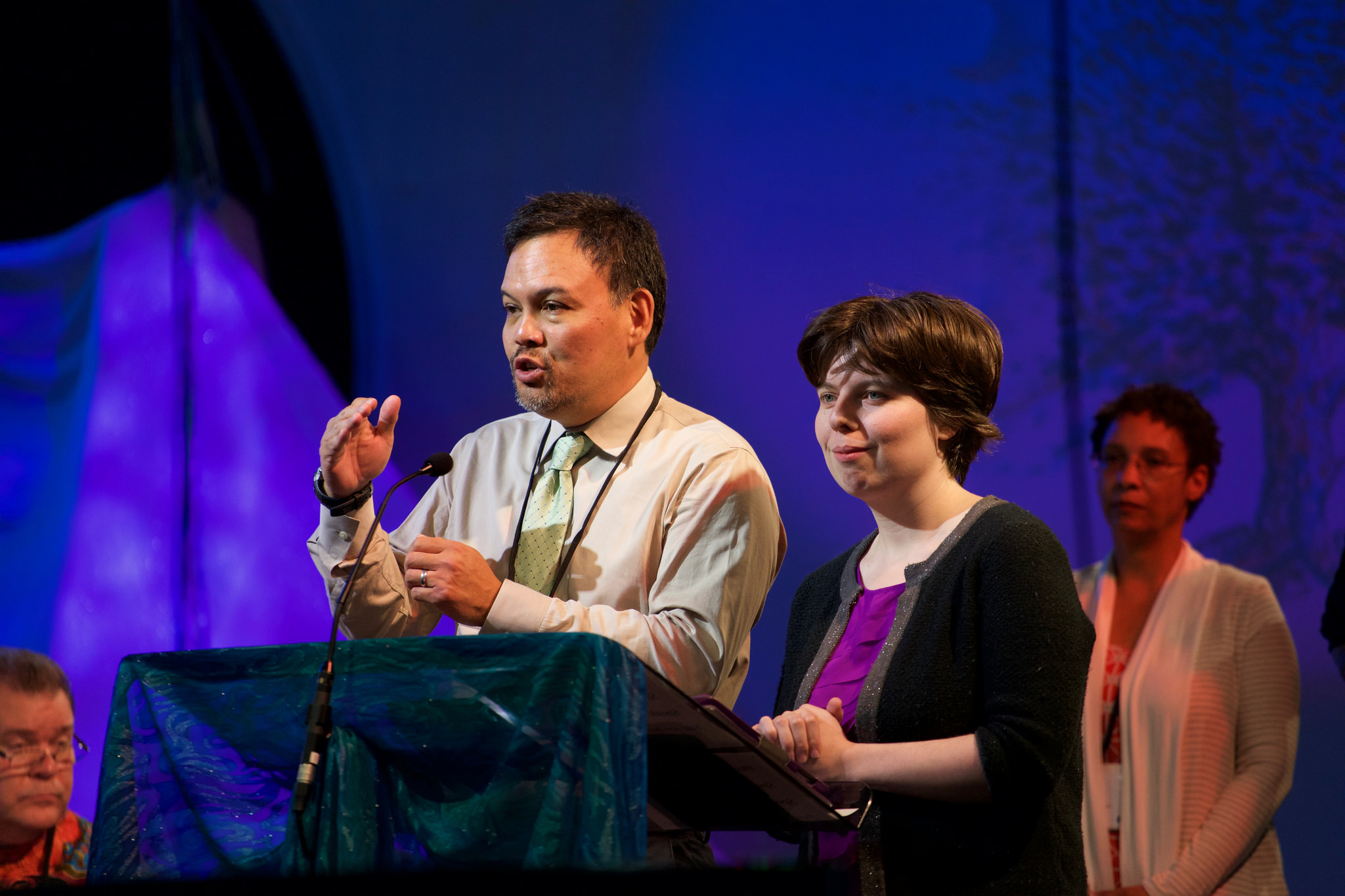 The Revs. David Nieda and Ruth Marston present a ‘perfected' version of non-conformity legislation before the plenary for consideration after a theologically diverse committee was tasked with integrating suggestion raised during an earlier committee of the whole. Photo by Patrick Scriven for the Pacific- Northwest Conference.

The California-Nevada Conference passed an “aspirational resolution” calling for the Book of Discipline not to be followed as it relates to items concerning LGBTQIA persons and ceasing judicial processes in matters related to prohibitions against LGBTQIA persons. LGBTQIA stands for lesbian, gay, bisexual, transgender, queer or questioning, intersex and asexual.

In Iowa, the Rev. Anna Blaedel came out as gay and three clergymen immediately filed a complaint against her.

Many conferences offered words of encouragement and prayers for the Council of Bishop’s “An Offering For A Way Forward” as it starts the process of appointing a special commission to deal with all the portions of church law dealing with LBGTQ people.

Bishop Mike Lowry, Fort Worth Episcopal area, stated the bishop’s special commission was not an invitation to violate the Book of Discipline.

The United Methodist Church in Estonia passed a resolution that “human sexuality belongs only within the bonds of marriage between a man and a woman.”

The Great Plains Conference approved an “aspirational resolution” during their June 1-4 meeting seeking to move the complaint process involving the Rev. Cynthia Meyer, who has said she is in a committed homosexual relationship, back to the bishop’s office.

On June 21, however, the Great Plains committee on investigation voted to refer the charges for trial. In a letter to clergy and lay members of the conference, Jones said the conference had no good options. “I hope to avoid a trial and still uphold my covenant vows. Nevertheless, our church’s constitution guarantees Rev. Meyer the right to a trial and we may end up having one,” he wrote.

The South Georgia Conference passed a motion asking their resident bishop not receive any clergy who have publicly stated their intent to disregard the current language of the Book of Discipline regarding human sexuality.

“It is most unfortunate that we have bishops, annual conferences, and conference boards of ordained ministry choosing to flagrantly disregard our Disciplinary Covenant while expressing concern for our historic connection and the unity of The United Methodist Church,” Beckum said.

The Oregon-Idaho conference board of ordained ministry joined Northern Illinois, Baltimore-Washington, Pacific Northwest and New York to consider all candidates for ministry without regard for their sexual orientations and gender identities. And the Oregon-Idaho clergy session voted during annual conference to affirm the board of ordained ministry’s action.

Some conferences were in session on June 12 when a gunman killed 49 people and injured 53 others inside a gay nightclub in Orlando, Florida. It was the deadliest incident of violence against LGBTQ people in the United States.

Minnesota passed a resolution in response to the shootings that offers repentance of the church’s stands toward LGBTQ people used “to demean, discriminate and encourage violence” while also praying for Bishop Bruce Ough as he leads the Council of Bishops and its commission “to the place where God is calling us today.”

General Conference withdrew membership from the national organization that advocates for women’s reproductive health and abortion in May.

The New York and Pacific Northwest Conferences and the Northwest United Methodist Foundation will divest from fossil fuels following decisions at their annual conference meetings in June.

Many celebrated their contributions to the Imagine No Malaria campaign, which has raised more than $68 million to end malaria deaths in Sub-Saharan Africa where one child dies from malaria every two minutes.

Conferences also took the opportunity to celebrate and thank the bishops who are retiring.

Retirees by jurisdiction or central conference: