The 864 delegates to next year’s special General Conference face a large task and only a short time to do it.

But whatever decisions the delegates make, the plan is for them to decide together — without the usual prologue of meeting in multiple legislative committees.

The Commission on General Conference, the international group of clergy and laity who plan the big meeting, has set the number of legislative committees at one. And all delegates will be on it.

Commission members — meeting Oct. 3-5 at the United Methodist retreat center Epworth by the Sea — voted for the plan unanimously. The move does not require any changes to the General Conference rules that delegates approved in 2016.

“Our guiding principles in creating this framework are transparency, fairness, full participation of delegates and stewardship of our limited time,” the commission’s Rules Committee said in its rationale for the decision.

“Our hope is that Christian conferencing as a whole body will enable us to receive the presence of the Holy Spirit in our midst.”

While The United Methodist Church’s top legislative body typically meets for 10 days, the special session in St. Louis will be Feb. 23-26, 2019. 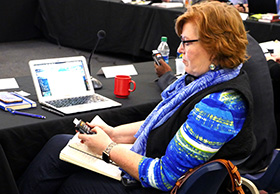 The Rev. Juliet Spencer, a commission member from the Louisiana Conference, tests out a new voting device that will be used by General Conference delegates in 2019 and 2020. Photo by Heather Hahn, UMNS.

Over those days, the delegates will work on determining what direction the church should take in its longstanding debate over homosexuality — an impasse that already has some congregations heading for the exits. Nothing less than the denomination’s future could be on the line.

The Commission on General Conference in many ways represents the denomination it serves. The members, most of whom will be 2019 delegates, have diverse theological perspectives regarding homosexuality and church unity.

However, the plan for one legislative committee had broad support among commission members from the moment it was discussed.

The Book of Discipline, the denomination’s governing document, requires that all petitions properly submitted to General Conference “shall receive the vote of a legislative committee.” The Discipline also gives authority to the 25-member commission, in consultation with the secretary and the business manager of General Conference, to set the number of committees.

Having only one committee brings the advantage of transparency, a number of commission members said.

“I think there is a high level of mistrust in the body, and I think this particular approach lessens the mistrust because everybody hears what everybody else hears,” said the Rev. Lynn Hill, a commission member from the Tennessee Conference. In 2016, delegates took three days to debate the rules.

Under the process and schedule approved by the commission, Saturday, Feb. 23 will be a day of prayer and preparation. It will mark the culmination of the bishops’ “Praying Our Way Forward” campaign to seek God’s help for church unity.

The first official day of the session will be Sunday, Feb. 24. Delegates will hear a presentation from the Commission on Way Forward — whose formation General Conference authorized in 2016 to help find ways to keep the church together. They will then spend the day in plenary discussion seeking to discern which of the multiple plans the majority of delegates want to refine.

This is not a day for amending legislation but instead determining what general direction the delegates want to go in. Bishops, who have no vote at General Conference, will preside over the day’s discussions.

The delegates will return to plenary on Tuesday, Feb. 26 for final voting and to consider what their actions mean for the future, including the next regularly scheduled General Conference in 2020. Again, bishops will preside.

Each day of the special session will begin with worship, with prayers and praise also woven throughout the process. The overarching theme will be “God is Able,” said Raymond Trapp, the special session’s worship and music director.

At this point, delegates face 99 petitions.

Of those, 48 are in the report by the Commission on Way Forward. The commission's report put forward three plans for the church’s direction, each of which contains multiple petitions.

In addition, 51 other petitions were submitted by deadline in the proper format. Many of those comprise alternative plans for the church’s future.

The valid legislation will be made public in November, once translated into the official General Conference languages of English, French, Portuguese and Kiswahili, and mailed to delegates. The Way Forward Commission report is already in all four languages.

What remains to be seen is how many of those additional 51 petitions will be deemed “in harmony” with the bishops’ call to the special General Conference. In July, the bishops announced the session’s purpose “shall be limited to receiving and acting upon a report from the Commission on a Way Forward based upon the recommendations of the Council of the Bishops.”

Under a process approved by the Commission on General Conference, the 51 petitions outside the Way Forward report will be reviewed by the Committee on Reference. If the committee finds a petition not to be in harmony, it will be withdrawn. The actions of the Committee on Reference will be reported in the first daily edition of the Daily Christian Advocate, the official General Conference record.

Delegates can reinstate a petition ruled not in harmony by a two-thirds vote of General Conference delegates.

The Committee on Reference has five vacancies that need to be filled by the Council of Bishops. The group’s meeting will be scheduled after that.

Another question mark heading into 2019 is how the Judicial Council, the denomination’s top court, will rule on the plans contained in the Commission on a Way Forward report. The bishops asked the Judicial Council to decide in advance whether petitions in the One Church, Traditional and Connectional Conference plans are in line with the church constitution. Changing the constitution requires a two-thirds vote of General Conference and two-thirds of the total annual conference votes.

The Judicial Council will meet Oct. 23-26, but it can issue its ruling on the plans any time after it deliberates.

Whatever the Committee on Reference or Judicial Council decides, General Conference planners hope they’ve provided a process for delegates to do their best work.

“I think people are coming to St. Louis expecting this to be different,” said the Rev. Laura Merrill, a commission member from the Rio Texas Conference. “My prayer is that folks come with a spirit of expectancy.”

General Conference planners have reversed the call for $200 registration fees after finding other ways to cover costs of the special session.

As church heads into ‘uncharted waters,’ the Commission on General Conference offers an overview of what to expect in 2019.