When Thomas Kemper became the first non-U.S. chief executive of The United Methodist Board of Global Ministries he said he wanted the mission agency to help local churches everywhere “to feel and see themselves as part of a worldwide family.”

Now, a decade later, the German native has left that position after overseeing an expansion of the agency’s international presence and collaboration with global mission partners.

On Sept. 1, he was succeeded in that office by Roland Fernandes, chief operating officer and general treasurer of Global Ministries. 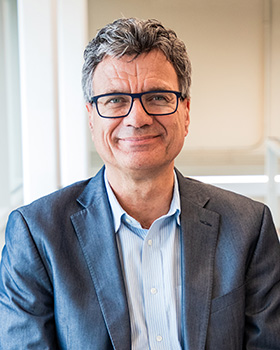 Thomas Kemper served as top executive of the United Methodist Board of Global Ministries from March 2010 through August 2020. Roland Fernandes, chief operating officer and general treasurer, is his successor. Photo by Jennifer Silver, Global Ministries.
Kemper remained a missionary at heart long after his own service in Brazil from 1985-94 and 11-year tenure in the German United Methodist Church’s mission office.

Maintaining a solid core of missionaries — who witness and serve in different locales and cultures and engage in a range of professions and activities — also continued to be a priority for the agency. Global Ministries has some 350 missionaries in international and U.S. domestic service at any given time.

“The missionary kind of incorporates the global nature of the church,” he told UM News in an interview in August. “They represent that the gospel is more than one culture, one language, one nation. This is so essential for the church.”

Not surprisingly, that mindset helped Kemper form an intimate relationship with the missionary community, he noted. “They trusted me as a fellow missionary,” he said.

About 200 active and retired missionaries or missionary families took part in an Aug. 11 Zoom farewell gathering with Kemper, which included a video of statements of appreciation in various languages and a song highlighting the phrase that became Kemper’s mantra about mission and missionaries: “From Everywhere to Everywhere.”

“We have felt supported and included under the collegial approach to leadership that you have fostered,” said Katherine Parker, chairperson of the United Methodist Missionary Association, in the video presentation. She credited him for bringing Global Ministries “into a new wave of mission that moves from the center to the margins and the margins to the center.”

In July 2019, for example, 50 young adults from 26 countries were commissioned in Phnom Penh, Cambodia, to serve in 33 countries for The United Methodist Church.

Global Mission Fellows is creating the young cross-cultural leaders the world needs, Kemper declared. “I had dreamed of having 500 (fellows) at the end of my term but the financial situation did not allow this,” he added. “It also requires good mentoring and accompaniment, which costs money.”

One of the highlights of Kemper’s time as top executive, he said, was helping orchestrate the successful departure of three young fellows from the Philippines in 2018 after they faced false political accusations from the government. Kemper recalled visiting Tawanda Chandiwana of Zimbabwe at the detention center in Manila, where curiosity about the anchor cross Chandiwana was wearing allowed him to witness to inmates that he was anchored in Christ.

That visit and the worldwide support for a campaign by Global Ministries to free the trio was inspiring, he said. “Suddenly, you felt you are part of a real movement, standing for solidarity and human rights.”

Kemper said his previous experience as a director for the Board of Global Ministries also shaped his conviction that the mission agency’s role is as the facilitator of mission rather than the owner of mission.

Early on, he said, he decided that staff needed to be hired internationally to achieve not just U.S. diversity but global diversity. 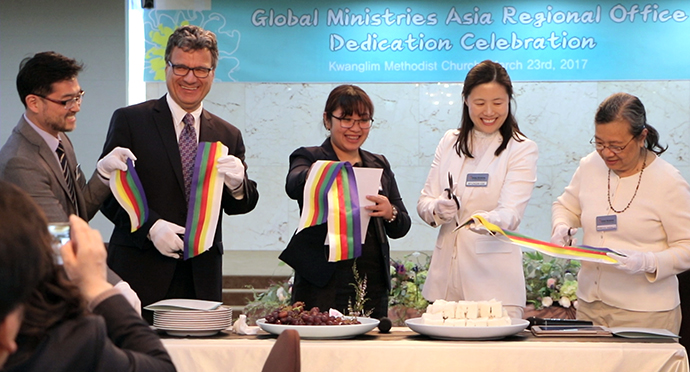 The Rev. Paul Kong, Thomas Kemper, Joy Eva Bohol, the Rev. Myungim Kim and Rebecca Asedillo cut the ribbon signifying the opening of the Asia Regional Office in Seoul, South Korea, in March 2017. File photo by Jennifer Silver, Global Ministries.
Moving the agency’s headquarters from New York to Atlanta in 2016 was “for missional reasons,” Kemper explained, part of the larger redirection to a global scale that included a plan to establish small regional offices in Latin America, Asia and Africa.

He acknowledged that the board’s longtime presence at the Interchurch Center — at 475 Riverside Drive in Manhattan — was advantageous when a number of mainline denominations and ecumenical groups had offices there. “It must have been an amazing time,” he said. “But it was a myth by the time I got there.”

The mission agency is leaner than it was in New York. Not all staff were invited to make the move and in recent years some 60 staff positions have been eliminated due to budget constraints. About 40 people working for Global Ministries and the United Methodist Committee on Relief were laid off between 2019 and the first half of 2020. The current staff count in Atlanta is about 115.

The new direction of a streamlined U.S. headquarters paired with regional offices reinforced the idea of a “roundtable approach” to mission by creating multi-lateral relationships with mission partners where everyone has a voice, Kemper said.

Reflections on a decade
of mission work

Thomas Kemper was interviewed in Atlanta by Global Ministries staff shortly before returning to Germany.

Watch video interview
“If we go only to bilateral relationships, we create a power dynamic that is very unhealthy for our relations,” he explained. “It’s really what we want theologically for our missional and relational standpoint.”

An example of multilateral relationships is the participation of Global Ministries in an annual meeting started by Methodist bodies in Asia to discuss how they can be more effective together in mission. “People consider us as equals as partners, not as people who want to dominate,” Kemper said.

The agency’s regional office in Seoul, Korea, which currently has nine staffers, “has really made a difference in the Asian context,” he noted. Other board staff based in Asia include three in the Manila, Philippines, office and one in China.

In Atlanta, Global Ministries also hosted a November 2018 Roundtable for Peace on the Korean Peninsula on behalf of The United Methodist Church, Korean Methodist Church and World Methodist Council, with input from the World Council of Churches.

Other achievements that Kemper counts as milestones during his tenure include:

• Growing a new relationship with United Methodist Women after that membership organization became independent from Global Ministries in 2012 in a way that has had “a liberating effect on both.”

• Returning land held in trust for the Wyandotte tribe during a Sept. 21, 2019 ceremony in Upper Sandusky, Ohio, “keeping promises as a church and as friends in mission.”

• Continuing a long-time emphasis to offer solidarity and support to persecuted Christians around the world, including Pakistan, Nigeria and Palestine.

• Celebrating 200 years of Methodist mission at an April 2019 conference at Emory University, co-sponsored with Candler School of Theology at Emory.

Kemper and his wife, Barbara, are now living in Bonn, Germany. He will serve as a part-time consultant for Wespath in support of central conference pensions and relationships.

“It’s a nice way of keeping the connection,” he said.

Inspired by a United Methodist church in Pennsylvania, Hampden Highlands United Methodist Church in Hampden, Me., set out to do mission projects to assist its neighbors, completing 24 projects, nine more than originally planned. The New England Conference has the story.
Bishops

Bishop Bob Spain, who served as the United Methodist Publishing House’s chaplain well into his 90s, is being remembered for his faithful and energetic ministry.
Church Leadership

Pastors are often so concerned about caring for others that they neglect their own safety, but they must learn to cry out when they need help.