A man of mixed African and European heritage who inspired the start of a national missionary-sending society took center stage as The United Methodist Church celebrated 200 years of mission.

The fact that John Stewart was sharing his Christian faith with the Wyandotte, a Native American tribe in Upper Sandusky, Ohio, makes his an even more remarkable story.

That wasn’t the only story at the April 8-10 bicentennial conference, sponsored by the United Methodist Board of Global Ministries and Emory University’s Candler School of Theology at the Emory Hotel and Conference Center.

The focus on “answering the call” to mission in the past, present and future touched upon places, pioneers and theological understandings. The conference considered the impact of colonialism, global politics and societal upheaval.

With themes of peacebuilding, healing and visions, the vibrant, multicultural worship included songs and prayers from Korea, Lebanon, Sri Lanka and other lands, along with drumming, dancing and even painting. 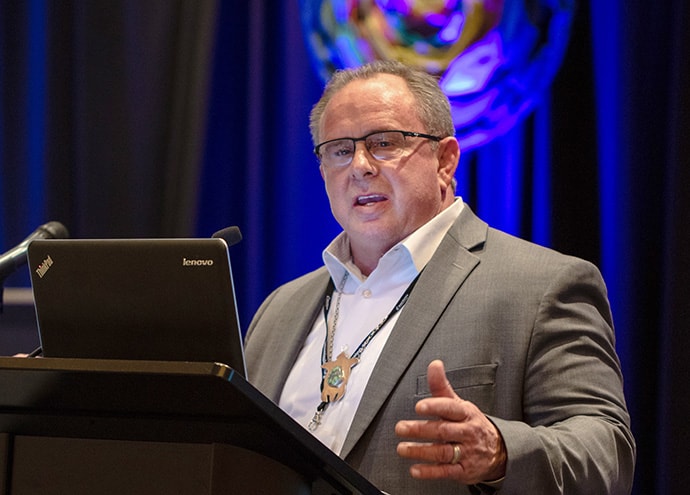 Stewart is an indicator that the denomination’s mission history is not just inhabited by white men but also filled with the contributions of women, people of color and Methodists outside the U.S. in places like Korea and Singapore, said the Rev. David W. Scott, director of mission theology for Global Ministries and the conference’s coordinator.

“For Global Ministries, this has been a really important story to tell ourselves as we’re trying to rethink what mission is and, more importantly, who does mission,” he explained. “Even in the broader Methodist family, mission is happening from everywhere to everywhere.”

More than 200 years of mission

The conference’s ultimate aim, Scott said, was to offer a variety of stories and perspectives to “spiritually and intellectually equip people to engage in creative Methodist mission in the future.”

Part of the immediate future will be the return, in a September ceremony, of the Wyandotte Indian mission property in Upper Sandusky. Now an official United Methodist heritage landmark, the land had been left to the Methodists for safekeeping.

The connection between the Wyandottes and the Methodist Episcopal Church began in 1816, after Stewart — a young man from Virginia who had his share of strife, stumbles and tests of faith — experienced a final conversion.

Much of the Methodist church’s early growth during that era was seeded in camp meetings marked by enthusiastic preaching, compassionate praying and deeply inspired personal reflections, said the Rev. Alfred Day, top executive of the United Methodist Commission on Archives and History.

During the conference’s opening banquet, Chief Billy Friend of the Wyandotte Nation of Oklahoma pointed out that Stewart arrived after the loss of a great chief and when he began to preach the gospel “it was a turning point in our tribal nation’s history.”

His efforts led the Ohio Methodist Conference to set up an official mission to the Wyandotte in 1819. But Stewart’s own time with the tribe was short. In failing health, he died in 1823 at the age of 37. 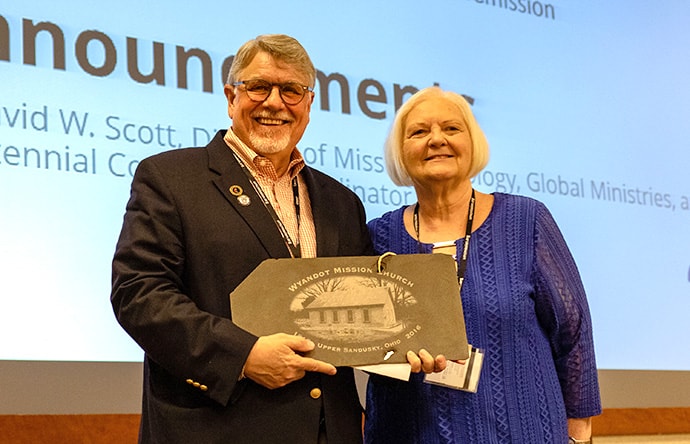 Chief Janith English, right, Principal Chief of the Wyandot Nation of Kansas, displayed a slate from a previous roof of the church named after John Stewart, the first Methodist missionary in the U.S., to the Rev. Alfred Day and others at the bicentennial conference. Photo by Jennifer Silver, Global Ministries.

Friend’s mother was a descendent of Stewart’s translator, but he also knows how the Wyandotte “almost lost our identity” when Native children were later forced into Christian boarding schools aimed at assimilating them into the mainstream white culture.

“I’m seven generations removed (from Stewart’s time) and we’ve made it our mission today that we never have another generation of Wyandottes who do not know what their identity is and how important it is to know their history and their culture,” he said.

When I first met the Rev. Tahir Widjaja on Jan. 13, 2005, he was busy cleaning up the mud-soaked debris around his church. It would be a long process.
Widjaja, his wife and 2-day-old daughter had survived the earthquake and tsunami that devastated Banda Aceh, Indonesia, on the Sunday after Christmas. About 50 members of his Methodist church did not survive.
I was there as a reporter for United Methodist News Service, accompanying a delegation of United Methodists and Methodists from Indonesia. The disaster, Widjaja told me, had given him a new mission: to get his church and school back up and running and to enlarge their ministry to the families of those 760 school students, some of whom lived in the neighborhood.

Fourteen years later, Widjaja was among the Indonesian Methodists attending the bicentennial mission conference in Atlanta. He is now president of the Development Provisional Conference of the Methodist Church in Indonesia, which represents Chinese-speaking churches.

After the tsunami, he recalled, he realized that — before anything else — the people of Banda Aceh had to recover hope. For three months, Widjaja said, “every night, we had a prayer meeting.”

His congregation raised $15,000 to help rebuild the church and school and other donations came from United Methodist conferences in the U.S. The late Rev. Sam Dixon, then head of the United Methodist Committee on Relief, came for the church’s rededication.

Widjaja remembered Dixon’s words that day: “When we dedicate this church, we must remember that God calls us to mission.”

United Methodists were a significant part of the overall tsunami recovery efforts, donating a then-record $41.5 million to UMCOR, which established field offices in Indonesia and Sri Lanka. UMCOR was one of the last aid agencies to leave Banda Aceh, serving 144,627 people through 14 grant-funded programs.

Chief Janith English, principal chief of the Wyandot Nation of Kansas, credited the Methodist Church for encouraging women “to soar and fly” and to preserve the tribe’s matriarchal culture.

Over centuries and decades, Wyandotte communities have been repeatedly dispersed “but not destroyed,” English said. The simple act of recognizing the disenfranchised and widening the circle of inclusion “can be a powerful, powerful force for positive change.”

The Rev. Elaine Heath, former dean at Duke Divinity School, amplified that message in her address on “Trauma-Informed Evangelism.”

“What does it mean that God’s love is saving us in a world that is terribly broken in so many ways?” asked Heath, who now leads the Community at Spring Forest.

She suggested shedding a top-down, statistics-driven, model of church planting, which doesn’t work anyway in places like Seattle or New England, where people are distrustful of religion and it takes eight to 10 years for a new church to get traction.

The key, Heath said, is to prioritize the well-being of the neighborhood — “the health, the healing and salvation of the whole neighborhood” — instead of the church building.

She told a story about a little church with 11 elderly members in the Asheville, North Carolina, area that was about to close until a district superintendent chose “to listen to the Holy Spirit.”

The historic church, now called Bethesda UMC at Haw Creek Commons, has repurposed itself for the neighborhood. “The basement of that church, that used to feel like hymnals and despair, that’s a beautiful co-working space,” Heath noted.

Connecting with the elementary school behind it, the church offers community gardening and hosts a bee club and a chicken club. And, these days, 45 to 50 people come to worship on Sundays.

Moving into the neighborhood, Heath said, means showing up, paying attention and cooperating with God — who is there already and offering healing and hope to traumatized people.

In Africa, where the trauma against the people has included war and the stripping of cultural values and mineral resources by outsiders, mission has emerged as a tool for peacemaking, said Bishop Mande Muyombo of the North Katanga Episcopal Area in the Democratic Republic of Congo.

“When you remove The United Methodist Church in my area, there will not be life,” he explained. “The church took its mission to become the center of hope, the center of development and the center of the building of the national fabric through peace and reconciliation.”

Creating effective mission for the future depends on involving people under 35, said Joy Eva Bohol, the program executive for youth engagement for the World Council of Churches.

For The United Methodist Church, the Global Mission Fellows program “is a testimony of how we do mission together,” added Bohol, a program graduate and native of the Philippines.

But many local and regional youth do not have such opportunities.

To fix that, Bohol challenged the church to create more mission programs on the local level; offer broader scholarship categories; de-emphasize the expectation that everyone needs to speak English and use technology to connect the global with the local. “As John Wesley would probably say today, the Worldwide Web is my parish,” she said.

Young people, she declared, feel that the church, in general, is too comfortable and not taking enough risks.

“If transformation is at the very core of the life of the church, why then are we so afraid to change?” she asked. 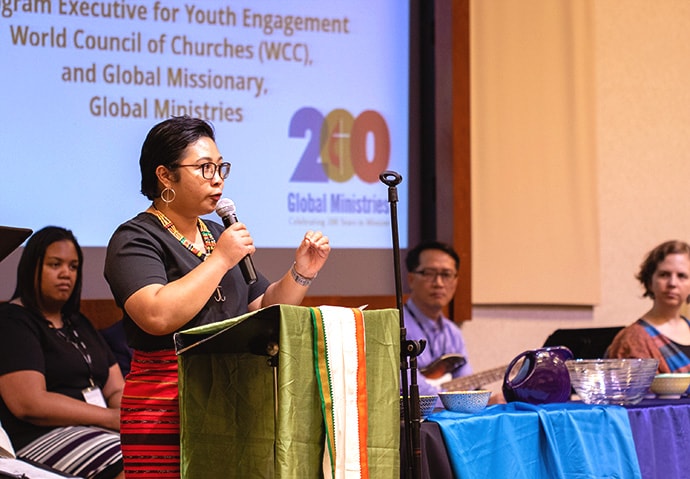 The church needs to be creative if it wants to engage young people as the future of mission, said Joy Eva Bohol, a United Methodist on the staff of the World Council of Churches. Photo by Jennifer Silver, Global Ministries.