A Methodist-led gathering of religious leaders is optimistic that recent diplomatic contacts with North Korea could help lead toward peace on the Korean Peninsula.

Despite that progress, “we are still standing on the crossroads between choosing the God of life or choosing the nuclear idol of death,” the group said in a statement from the Nov. 9-11 Roundtable for Peace on the Korean Peninsula.

“This urgent and critical moment is an opportunity for God’s transformative redemption,” the roundtable said in its “Atlanta Statement” as it pledged to foster the replacement “of the old system of division and power” on the peninsula and help create “a civilization of sang-saeng (mutual living) in and beyond South Korea and North Korea.” 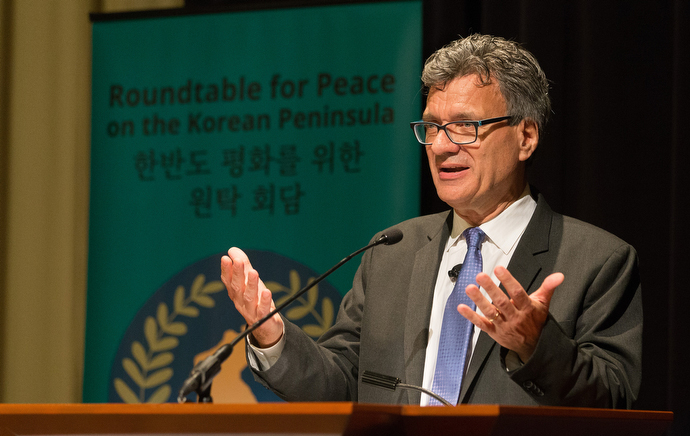 Thomas Kemper, top staff executive of the United Methodist Board of Global Ministries, welcomes delegates to the Roundtable for Peace on the Korean Peninsula in Atlanta. Photo by Mike DuBose, UMNS.

Throughout the gathering, roundtable participants reflected on a new momentum toward improved relations with North Korea, starting with the presence of its athletes at the PyeongChang Winter Olympics last February. 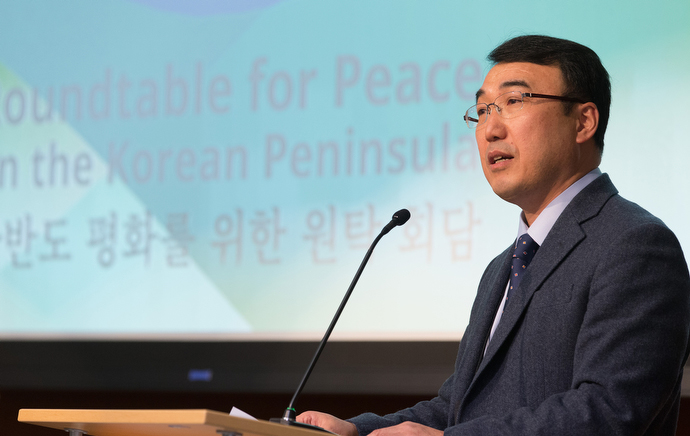 The Rev. Jooseop Keum speaks during the roundtable. Keum is a professor at the Presbyterian University and Theological Seminary in Seoul. Photo by Mike DuBose, UMNS.

This backdrop contributed to the timeliness of a forum where church leaders pondered the next steps for fostering peace. The discussions — touching on theology, culture, politics and social justice — were anchored by worship, including a rousing version of “Let There Be Peace on Earth” by a Korean church’s children’s choir.

The “reunification, reconciliation and restoration” of the Korean Peninsula is not just a matter of global politics, said United Methodist Bishop Hee-Soo Jung of the Wisconsin area during the conference’s closing session.

“While we value and regard the support that President Trump and the United States provide … it is a process that must be owned and guided by the Koreas,” said Jung, who is president of Global Ministries. 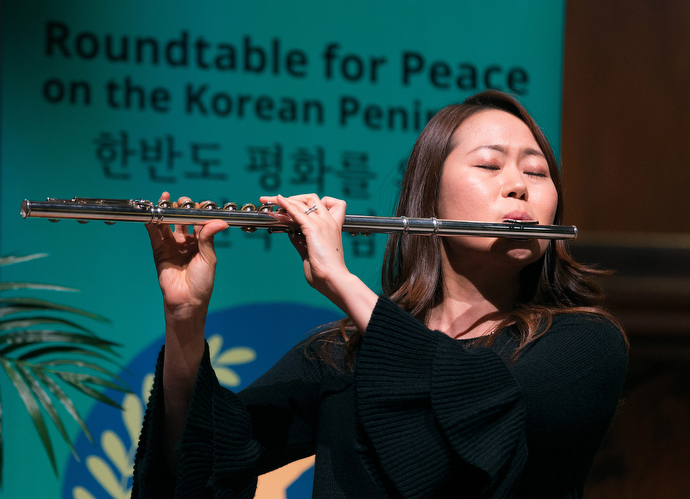 Yoonyung Seo plays the flute during closing worship at the Roundtable for Peace on the Korean Peninsula at Grace United Methodist Church in Atlanta. Photo by Mike DuBose, UMNS.

That position is echoed in the Atlanta Statement. Roundtable participants affirm agreements and efforts to end hostilities and call for “an immediate and official end” of the Korean War. But they also urge “the U.S. and the international community to respect the self-determination of the two Koreas, including allowing a step-by-step approach to achieve denuclearization.”

The Nov. 9-11 gathering in Atlanta was the third Roundtable for Peace on the Korean Peninsula.
In its Atlanta Statement, the roundtable said it “has sought to strengthen the church’s role of mediation in the matters of the normalization of DPRK (Democratic People's Republic of Korea, official name of North Korea)-USA relations, and in the denuclearization of the Korean Peninsula, alongside the church’s longstanding call for global denuclearization. Additionally, the roundtable has dedicated renewed attention to truthfully acknowledging harms inflicted on all sides and how to work toward present healing.”
Read the entire Atlanta Statement in English

The importance of a “step-by-step” process was cited by Former U.S. President Jimmy Carter and the Rev. James Laney, former U.S. Ambassador to South Korea, in their presentations during the roundtable’s opening session Nov. 9 at the Carter Center.

If the U.S. was willing to undertake such a compliance process, it could “lead to a complete denuclearization in North Korea and hopefully the entire Korean Peninsula,” Carter said.

Inspiration from Carter and Laney helped the roundtable produce its statement, said Thomas Kemper, top executive for Global Ministries, which he called “a clear plan” for direct and meaningful church engagement in the peace process.

“More than a few of the civic and church leaders at the roundtable encouraged a greater and stronger role for the church working to encourage our national leaders,” Kemper added.

What doesn’t help the peace process, church leaders declared, are the continuing international sanctions against North Korea, along with the American travel ban. “This obstructs essential humanitarian access and goods and services, not to mention opportunities for building trust among peoples,” the statement said.

The Rev. Jooseop Keum, a professor at the Presbyterian University and Theological Seminary in Seoul, told United Methodist News Service he is deeply concerned about how the approaching harsh weather will affect North Koreans. 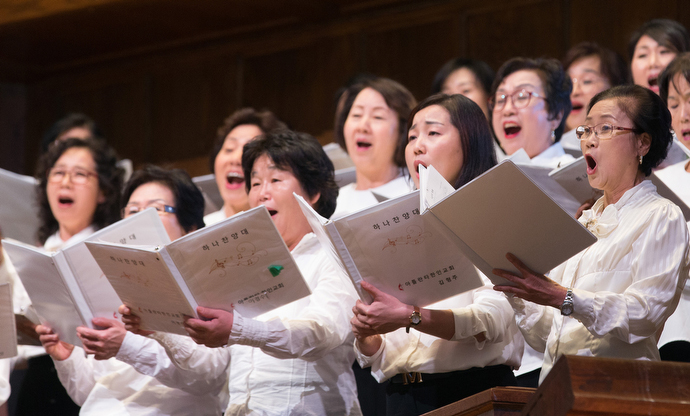 The choir from the Korean Church of Atlanta United Methodist Church sings during closing worship at the roundtable. Photo by Mike DuBose, UMNS.

“They are short of food and energy (fuel) to go through, to survive this coming winter,” explained Keum, who gave a presentation on “Peace and the Role of Mission” during the roundtable.

“Humanitarian aid is in need to keep already established peace on the Korean Peninsula,” he said. “As the children of God, we seek God’s wisdom and give to isolated North Korea a certain confidence to continue denuclearization.”

The U.S. travel ban also accounted for some empty seats at the Roundtable for Peace on the Korean Peninsula. Organizers tried unsuccessfully to obtain U.S. visas for a delegation of North Korean Christians, Kemper said. 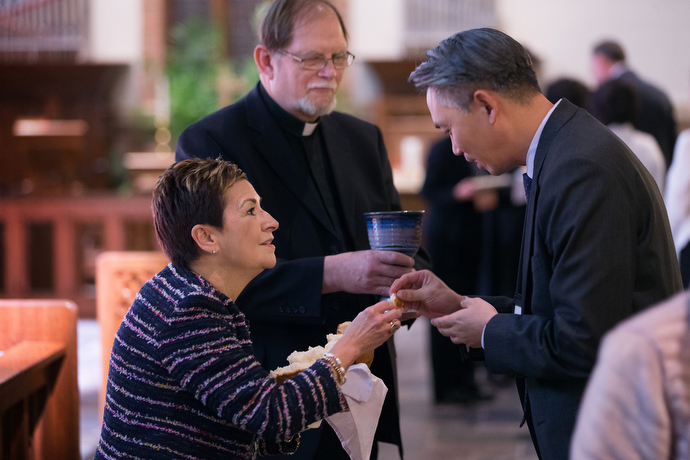 “Their presence could have undoubtedly played an important part in fostering the new relations among peoples that was so warmly touted in the Singapore Statement (between the U.S. and North Korea) of this past June,” he noted. 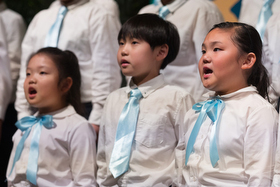 In a Nov. 8 message, the Korean Christian Federation in North Korea called the Atlanta gathering “of great significance” and lauded declarations from the 2018 summits that “aim at re-linking the severed blood ties between the fellow countrymen and at realizing peace and stability … and therefore comply with the Lord’s intention for love, justice and peace.”

The Rev. Jin Yang Kim, a United Methodist missionary assigned to the World Council of Churches in Geneva, said that when a delegation from both North Korea and South Korea visited WCC headquarters last June for an ecumenical forum meeting on Korea “there was growing hope something miraculous thing could happen on the Korean Peninsula.”

While interaction between the U.S. and North Korea seems to have stalled, he said, “I hope this gathering and the Christian peace movement gets some momentum to impact U.S. foreign policy, and hopefully the U.S. will engage in dialogue and make more progress.”

North Korean Christians were present in spirit during the event’s Nov. 10 evening public worship service. The Rev. Hannah Hwa-Young Chong, senior pastor of Community United Methodist Church in Naperville, Illinois, included the North Korean version of The Lord’s Prayer and said: “The focus of the worship flow and liturgy was to contain hope of healing and reconciliation of Korea.” 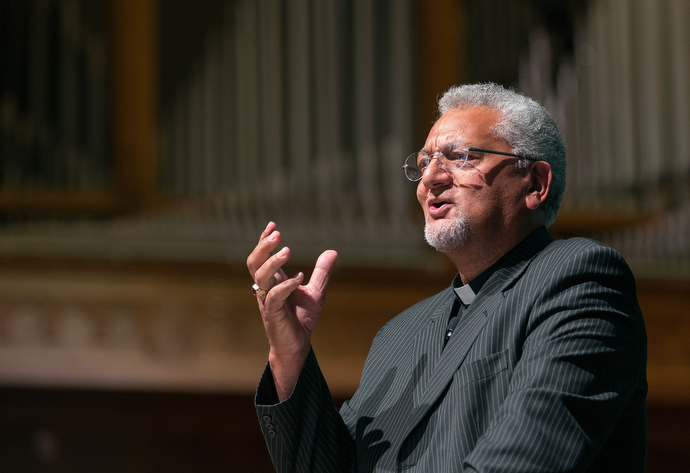 “Especially, I prepared the Holy Communion to experience unity and reconciliation — actualizing peacemaking and foretasting the Kingdom of God,” she explained.

The service began with musical praise by several choirs from the Korean Church of Atlanta, United Methodist Church. Youngran Park, the music director, said she specifically chose two songs to reflect the occasion, including “Hail to the Brightness of Zion’s Glad Morning,” to demonstrate “the great expectation and hope of a dawn of freedom and prosperity in North Korea.”

In his sermon, Bishop Ivan Abrahams, a South African and top executive of the World Methodist Council, echoed the hope “to see a united Korea in our lifetime.”

“Peace, as we heard today in the roundtable, never happens by chance,” he said. “We make peace, we work for peace.”

Instead of relying on a pastor to oversee its young adult ministry, First Korean United Methodist Church in Wheeling, Illinois, entrusted it to a devoted and committed volunteer layperson with a calling and vision.
General Church

Like the main character in the Oscar-winning film, itinerant pastors learn to form community and connection even though they are always on the move.