•  The decision comes amid continued struggle over the appointment of a new pastor to Mt. Bethel, one of the conference’s largest congregations.

• Mt. Bethel leaders have said the church plans to disaffiliate from the denomination, but the process has not yet taken place. 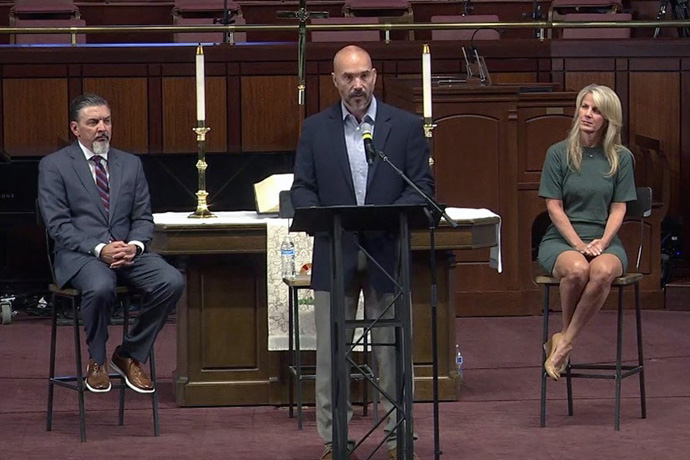 Rustin Parsons, co-lay leader for the congregation of Mt. Bethel United Methodist Church in Marietta, Ga., announces that the church is beginning the process of disaffiliating from denomination during an April 26 press conference. Amid a continued fight over who should be the church’s pastor, the North Georgia Conference announced late July 12 that it was assuming management of the congregation’s assets. Screenshot of livestream by UM News, courtesy of Mt. Bethel United Methodist Church.

Citing strife over a new pastor’s appointment and other issues, North Georgia Conference leaders voted to take over management of the conference’s largest-membership congregation.

The conference’s Bishop Sue Haupert-Johnson, district superintendents and a church-property board “unanimously determined that ‘exigent circumstances’ have threatened the continued vitality and mission of Mt. Bethel United Methodist Church,” the conference said in a statement.

Employment, instruction, activities and worship at the church and academy will continue but under the direction of the conference board of trustees, the conference said.

“What has occurred is simply a rejection by the leadership at Mt. Bethel of the rules and procedures for our church as outlined in the Book of Discipline and amount to an obstruction of the appointment process and polity of The United Methodist Church,” Haupert-Johnson said in a statement.

She told United Methodist News that the conference leaders made their decision in consultation with legal counsel and conference committees. 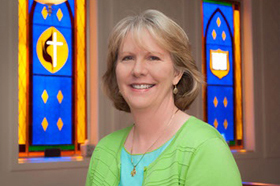 “The people of Mt. Bethel Church will do all in their power to resist the aggressive actions against their church, and they will do all they can to restore the reputational damage Haupert-Johnson is inflicting on many local United Methodist churches that simply want to do ministry,” the Mt. Bethel statement said.

Leaders at Mt. Bethel shared the statement after UM News’ request for comment.

The conference is acting within its authority under the Book of Discipline, the denomination’s policy book, said the Rev. Anne L. Burkholder. She is an associate dean at Emory University’s Candler School of Theology in Atlanta as well as co-author of “Quick and Easy Guide to United Methodist Polity.”

For centuries, the denomination has maintained a trust clause, which states that churches hold property in trust for the entire denomination.

“The church is acting outside the boundaries of the current Book of Discipline,” Burkholder said. “The conference does have the authority to make this decision and act on it.”

Burkholder also has known Haupert-Johnson a long time and says she has never had any question about the bishop’s “personal and professional integrity. “

The United Methodist Church operates on a system of itinerancy — meaning clergy go where they are appointed. In their ordination services, United Methodist elders pledge “to go wherever you are sent, to serve however you are called, to exercise your ministry within and on behalf of the whole Church, to love all among whom you are placed, and to love God above all.” 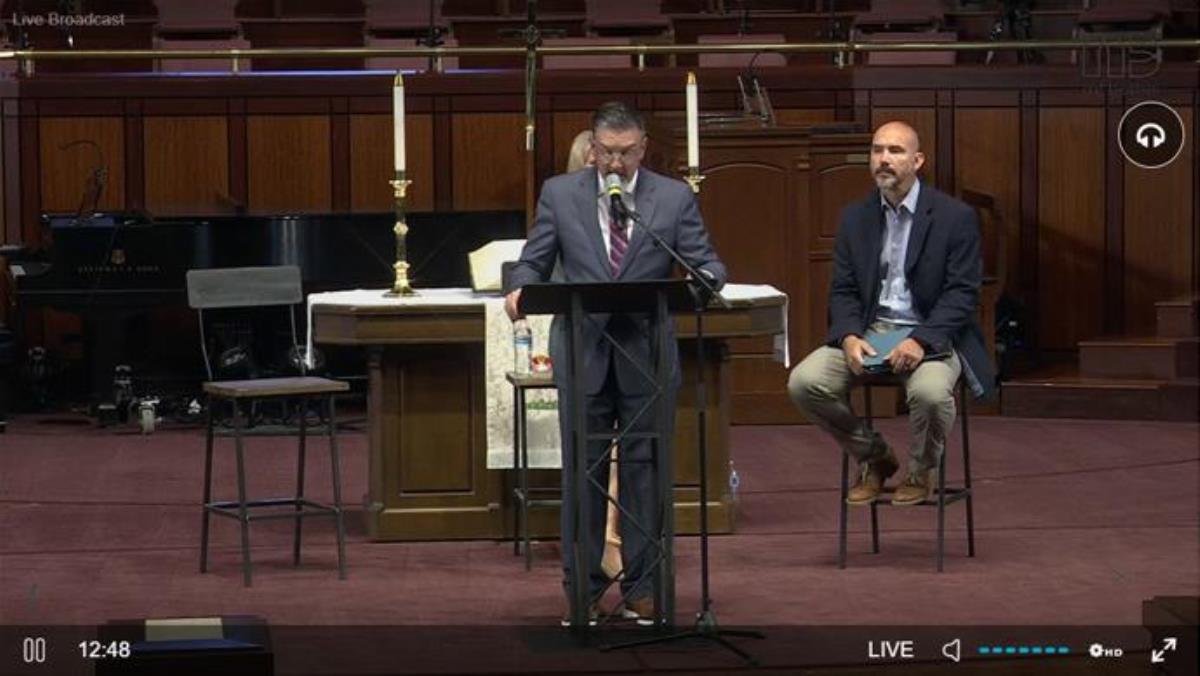 Jody Ray, the church’s senior pastor since 2016, announced in an April press conference that he was refusing the new appointment and surrendering his clergy credentials instead. Church lay leaders said Ray would continue as lead preacher and chief executive officer, and church leadership announced plans to disaffiliate from The United Methodist Church.

Mt. Bethel leaders also filed a complaint against Haupert-Johnson and the Rev. Jessica Terrell, the district superintendent who oversees the church, saying the two did not properly consult the church on the appointment. Haupert-Johnson has offered a sharply different account from that of Ray and congregation leaders, saying Ray hung up on the district superintendent and never allowed consultation to take place. 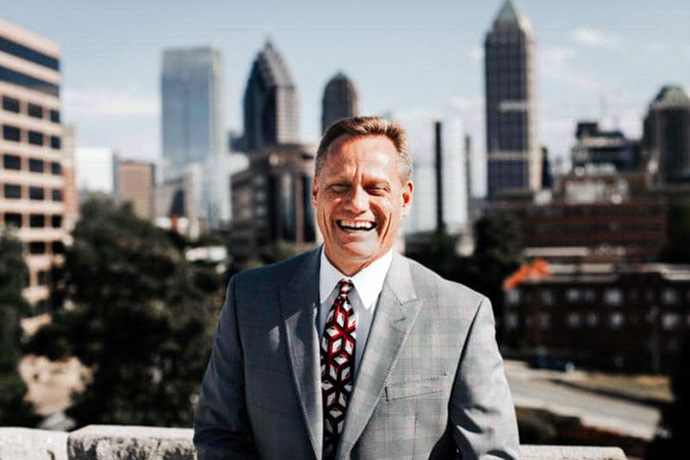 The Rev. Steven Usry is the newly appointed senior pastor of Mt. Bethel United Methodist Church, but church leaders have limited his compensation and role.  Photo courtesy of the North Georgia Conference.

Usry identifies as a theological traditionalist, which Haupert-Johnson sees as a good fit for Mt. Bethel. He began meeting with church members offsite this spring before the new appointment took effect.

“During my meetings with Mt. Bethel members and leaders, I was reminded about how passionate people are about their faith and church,” he told UM News. “During and after each of the meetings, I also had conversations with members who were extremely welcoming and ready to begin ministry together.”

He officially started his new appointment July 1, but the church accepted him only under protest and with limitations. The church set his salary at the minimum compensation for clergy, did not allow him use of an office on its main campus and said that he would operate under the supervision of Ray, who is no longer United Methodist clergy.

Usry, in an open letter, said church administrative leaders also continued to make financial and policy decisions without fully informing church members of the consequences of those decisions.

At the North Georgia Annual Conference on June 3-5, the conference’s board of trustees presented a path for churches to disaffiliate under the provisions established by the 2019 General Conference.

Haupert-Johnson told UM News that Mt. Bethel's acting leaders have made a number of financial and personnel decisions that are clearly in violation of the Book of Discipline. “This includes imposing limits on the role and compensation of the appointed pastor-in-charge,” she said.

Among the exigent circumstances that led to the transfer of assets, the conference lists the church changing its governance structure to a seven-person executive committee with full authority and no time limit on terms. Such a committee does not exist in the Discipline’s church governance structure. The conference said Mt. Bethel also has made plans to use credit lines, transfer interests in assets and sell property without approvals of a church administrative council or charge conference.

Leaders at Mt. Bethel did not immediately respond to UM News’ request for comment beyond their statement.

“I know Mt. Bethel to be a great church,” Usry said. “I am working tirelessly for the church and am absolutely FOR Mt. Bethel. I will continue to seek solutions to this present crisis and will not be deterred. I routinely ask people to pray for God’s protection and provision over the Bride of Christ at Mt. Bethel.”

The strife at Mt. Bethel comes at a time of strain within The United Methodist Church.

Mt. Bethel has not been a bystander in the debate. The church is part of the traditionalist advocacy group the Wesleyan Covenant Association and hosted its global gathering in 2018. The Wesleyan Covenant Association is overseeing the formation of the Global Methodist Church, a new traditionalist denomination that plans to break away from The United Methodist Church.

In the meantime, the Discipline has a provision for churches to disaffiliate, providing they meet certain requirements, including paying two years’ of apportionments — or shares of church giving — as well as its pension liabilities, determined by the conference.

In their statement, Mt. Bethel leaders said by taking legal action, the conference is seizing “assets which will become property of Mt. Bethel once it completes a process for disaffiliating from the United Methodist Church, initiated in April 2021.”

One of the requirements is that the congregation approves disaffiliation by at least a two-thirds majority of a church’s professing members present at the vote. Such a vote will likely not occur until at least next spring, a church spokesperson told the Marietta Daily Journal.

For now, both Usry and Haupert-Johnson ask for prayer.

“I am thankful for the people of the North Georgia Conference, in all their varied contexts, and covet your prayers for them,” Haupert-Johnson told UM News. “I especially ask for prayers for Mt. Bethel UMC and its community.”

United Methodist churches held memorial services where people who lost loved ones during COVID-19 gathered to console one another and celebrate life — things they were unable to do during pandemic restrictions.