With more people forced from their homes than ever before, the Council of Bishops is urging extra support for The United Methodist Church’s work with migrants.

The kind of support bishops have in mind will require approval from General Conference and other church decision-makers.

“Human migration is as old as human history starting with Abraham and Sarah,” Bishop Minerva Carcaño, chair of the United Methodist Immigration Task Force, told her fellow episcopal leaders. She spoke May 8 during the bishops’ spring meeting near Chicago.

“There continue to be more than 65 million people who have been forced to migrate from every region of the world,” she said, citing data from the World Health Organization. “It is a last resort for people.”

The migration crisis has no end in sight. Natural disasters exacerbated by climate change, violence incited by bigotry and humanity’s “warring ways” will continue to force people to seek new refuge, she said.

But whatever leads people to take flight, the Council of Bishops agreed that the church has a role in welcoming the sojourner.

“This is the journey that is before us as people of the Christian faith and people of good heart,” said Carcaño, who also leads the California-Nevada Conference.

The Immigration Task Force will ask next year’s General Conference, the denomination’s top lawmaking body, to designate an annual Special Sunday offering to support Global Migration Advance (No. 3022144), a fund established in 2014 to support migrants around the globe.

The denomination currently has six churchwide Special Sundays that fund particular efforts such as peace work, scholarships, Native American ministries and the administrative costs of the United Methodist Committee on Relief.

The proposed Global Migration Sunday proceeds would also go to UMCOR and its parent agency, the United Methodist Board of Global Ministries, to address migrant issues.

• The right to stay and flourish in one’s country of origin.
• Safe passage for those forced to leave.
• A process to meet the needs of new arrivals.
• Support for those returned to their home countries after deportation.

If General Conference approves, the new Global Migration Sunday would start in 2021.

In the meantime, the bishops also plan to ask church leaders to authorize a Sunday in 2020 for an offering to the Global Migration Advance. Such a special offering requires the approval of the General Council on Finance and Administration, the denomination’s finance agency, and the Connectional Table, which acts as a sort of church council for the denomination.

Bishop Julius C. Trimble, who leads the Indiana Conference, told his colleagues on May 9 that support for global migration could be “a guaranteed win for the church.”

But the good will happen, he said, “only if the full Council of Bishops would support this and its implementation.”

Trimble acknowledged that by the standards of United Methodist generosity, that wasn’t a large amount of money. He said the church can have an impact around the globe if bishops see promoting the Sunday as a personal responsibility.
The needs are great. 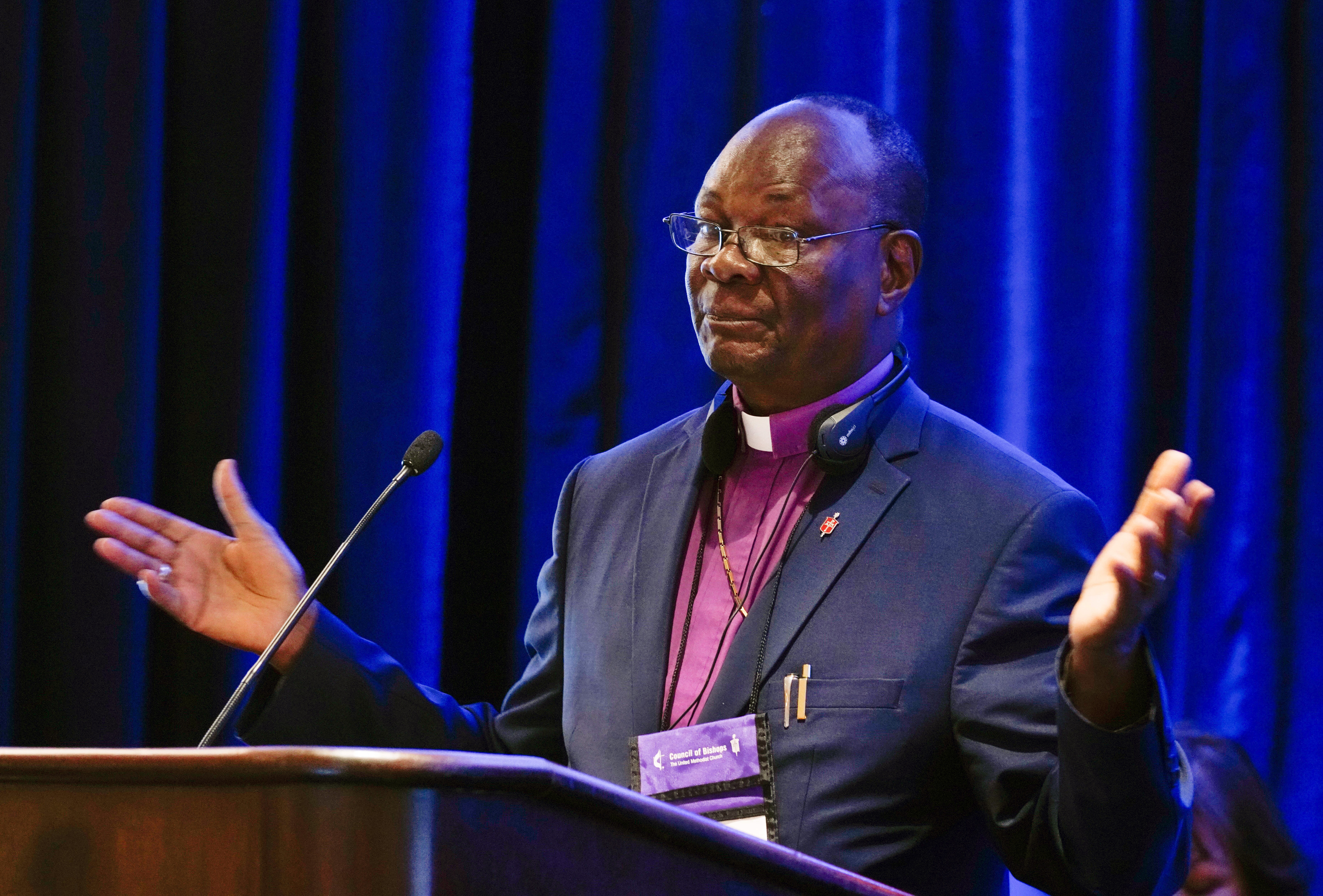 Bishop Gabriel Yemba Unda speaks to his fellow episcopal leaders about the history that has drawn refugees to the Democrat Republic of Congo. Photo by the Rev. Todd Rossnagel, Louisiana Conference.
Bishop Gabriel Yemba Unda, whose conferences in East Congo supported the previous Global Migration Sunday, told bishops about the history that has led so many refugees to his home Democratic Republic of Congo.

Historically, Congo has received immigrants from other parts of Africa. Since the 1990s, the country also has become a refuge to Tutsis fleeing genocide in Rwanda and Angolans forced from their homes. The country recently has received refugees from neighboring Republic of Congo, which has experienced its own unrest.

“In all of these cases, it is the children and women who suffer most,” Unda said through an interpreter.

But with help from United Methodist partners, including Global Ministries and a number of U.S. conferences, he said his area is helping the displaced.

The Council of Bishops urged UMCOR to continue addressing the humanitarian needs of migrants with special attention to work in the Congo.

The bishops also approved these actions by its Immigration Task Force:

• The appointment of Bishops Elías Galván, Jonathan Holston, Michael McKee, Scott Jones and Carcaño to research and prepare an action report on the root causes of migration from Honduras, where The United Methodist Church has a presence.
• The consideration of the impact of migration in whatever area bishops are meeting.
• Plans to bring to the bishops’ November meeting the recommendations from the World Methodist Council’s 2019 Consultation on Migrant/Diaspora Churches, which will be in June.

In its report to bishops, the task force noted it aimed to follow the guidance of Matthew 25:35.

“We humbly do this work remembering Jesus’ words that when we welcome the stranger, we welcome him,” the task force said.