Just six days before his death, John Wesley roused himself to write one last letter. 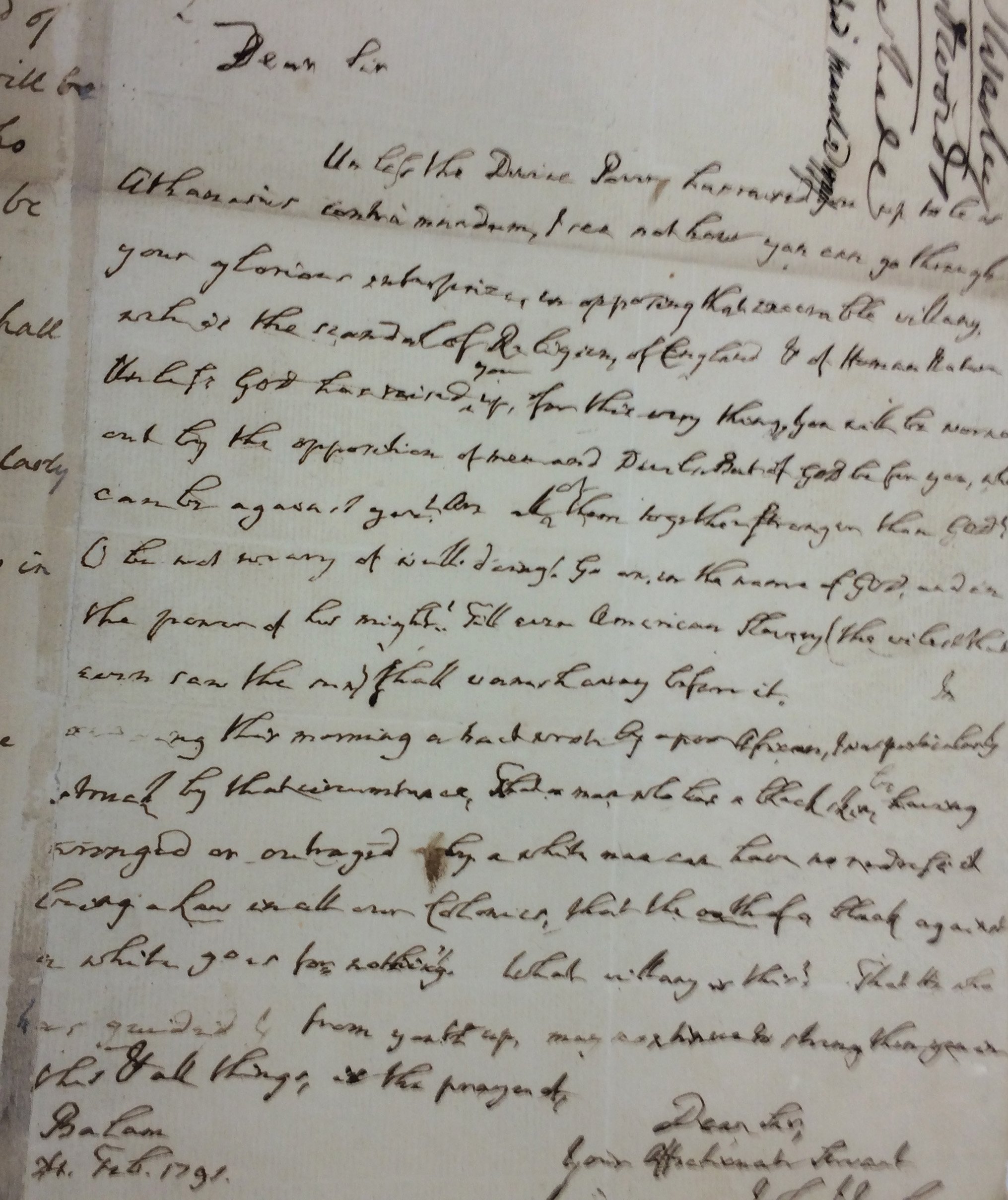 The 87-year-old's goal: To encourage a fellow abolitionist to keep the faith in the fight against slavery.

"O be not weary of well doing!" Methodism's founder wrote to William Wilberforce, the famed abolitionist in the British Parliament. "Go on, in the name of God and in the power of his might, till even American slavery (the vilest that ever saw the sun) shall vanish away before it."

Wesley's original letter is one of the treasures preserved in the vaults of the United Methodist Commission on Archives and History. The agency, housed at United Methodist-related Drew University, offers materials — like that letter — that connect church members with their Wesleyan heritage.

"We're the family album of The United Methodist Church," said the Rev. Alfred T. Day III, the top executive of Archives and History since 2014.

Like any good family album, the archives provide a tangible connection to previous generations, a reminder of some great vacation spots and a source of comfort in changing times.

Day and the agency's five other staff members want to make the album's contents as accessible as possible to scholars and church members alike. Descriptions of content are available online at gcah.org.

"We are not just people interested in collecting stuff and putting things on shelves," Day said.

"We are also interested in making sure the denomination is aware of what we have and exactly what impact it has on being United Methodist today."

Here are some of the ways Archives and History can help United Methodists get to know their family.

Here is a list of the denomination's predecessor bodies with records at Archives and History:

Are you researching your own family's Wesleyan roots? If you have an ancestor who was a full-time ordained minister or missionary in The United Methodist Church or one of its predecessor bodies, Archives and History can help.

Quick Facts about Archives and History

The underground vault is vast enough to remind visitors of the warehouse where the Ark of the Covenant is stashed at the end of "Raiders of the Lost Ark."

While its treasures are not quite of biblical proportions, the contents get far more care and attention than Indiana Jones' find. Here are some facts about Archives and History.

Also, a rare find: Archives and History has one of the largest collections of correspondence by Francis Asbury, the founding bishop of the Methodist Church in the U.S. Those documents include Asbury's notes to himself on the quality of his preachers.

The agency's collection of conference journals includes clergy members' official obituaries and online index of the clergy obituaries that goes back to the 1780s.

Archives and History also has obituaries for many of U.S. Methodism's missionaries as well as the reports they filed about their work. Those reports often include key events such as the birth of children, as well as accounts of the trials they endured for their faith.

In some cases, the agency can supply photographs of missionary families or missionaries' applications.

Copies of these documents are available by filling out the agency's genealogical research form online. There may be some fees for scanning missionaries' documents of more than eight pages. Copies of official clergy obituaries cost $5.

"I think archives can validate lives, even if it's just three sentences in a conference journal that says so-an-so served as a minister or a minister's spouse and were dedicated to the church," said Frances Lyons-Bristol, the agency's reference archivist. "All these things add to the story and remind us from whence we came."

Are your looking for new places to visit? Archives and History offers a traveler's guide to the denomination's Heritage Landmarks. General Conference, the global denomination's top lawmaking assembly, has designated these 46 sites as "specifically related to significant events, developments, or personalities in the overall history of The United Methodist Church or its antecedents."

The sites include Barratt's Chapel and Museum in Frederica, Delaware, the scene of the first meeting between Methodism pioneers Thomas Coke and Francis Asbury, and a cluster of sites in Deadwood, South Dakota, where a Methodist preacher brought the gospel to gold prospectors.

Heritage Landmarks are not limited to the United States. They also include the College of West Africa in Monrovia, Liberia; the Mary Johnston Hospital in Manila, the Philippines; and Old Mutare Mission in Zimbabwe.

"Each one of these places captures some of aspect of our United Methodist heritage," said L. Dale Patterson, the agency's archivist and records administrator. "We even include directions on how to get there."

Is your local congregation undergoing a time of change or struggle? In times of difficulty or uncertainty, church records can be a comfort.

Day suggests that churches not wait for major anniversaries to display the photographs and other artifacts that tell the story of their ministry. Instead, he recommends that congregations assemble what he calls a "Wall of Wonder" when times are tough.

Archives and History can augment such exhibits with a corresponding timeline for the denomination and its predecessors.

"In seeing that timeline of a congregation's life, you see as the hymn ‘Amazing Grace' says, ‘Through many dangers, toils and snares, we have already come,'" he said.

Simply put, such mementos help people of faith see God at work over the long haul.

It's a perspective John Wesley would appreciate. His devout wish to end legalized slavery in North America took almost a century to come to fruition.

The British Empire did not outlaw the slave trade until 1807, 16 years after Wesley's death. The fight over slavery actually split Wesley's movement in the United States in 1844. The United States finally officially abolished slavery with the ratification of the Constitution's 13th Amendment on Dec. 6, 1865.

Even that did not settle the dispute among Wesley's followers, but the Methodist Church ultimately reunited in 1939.

"I think what history helps us to do is to take a longer view," Day said. "Look at what we've come through in the past. Why should we think that God's grace isn't going to lead us into the future?"