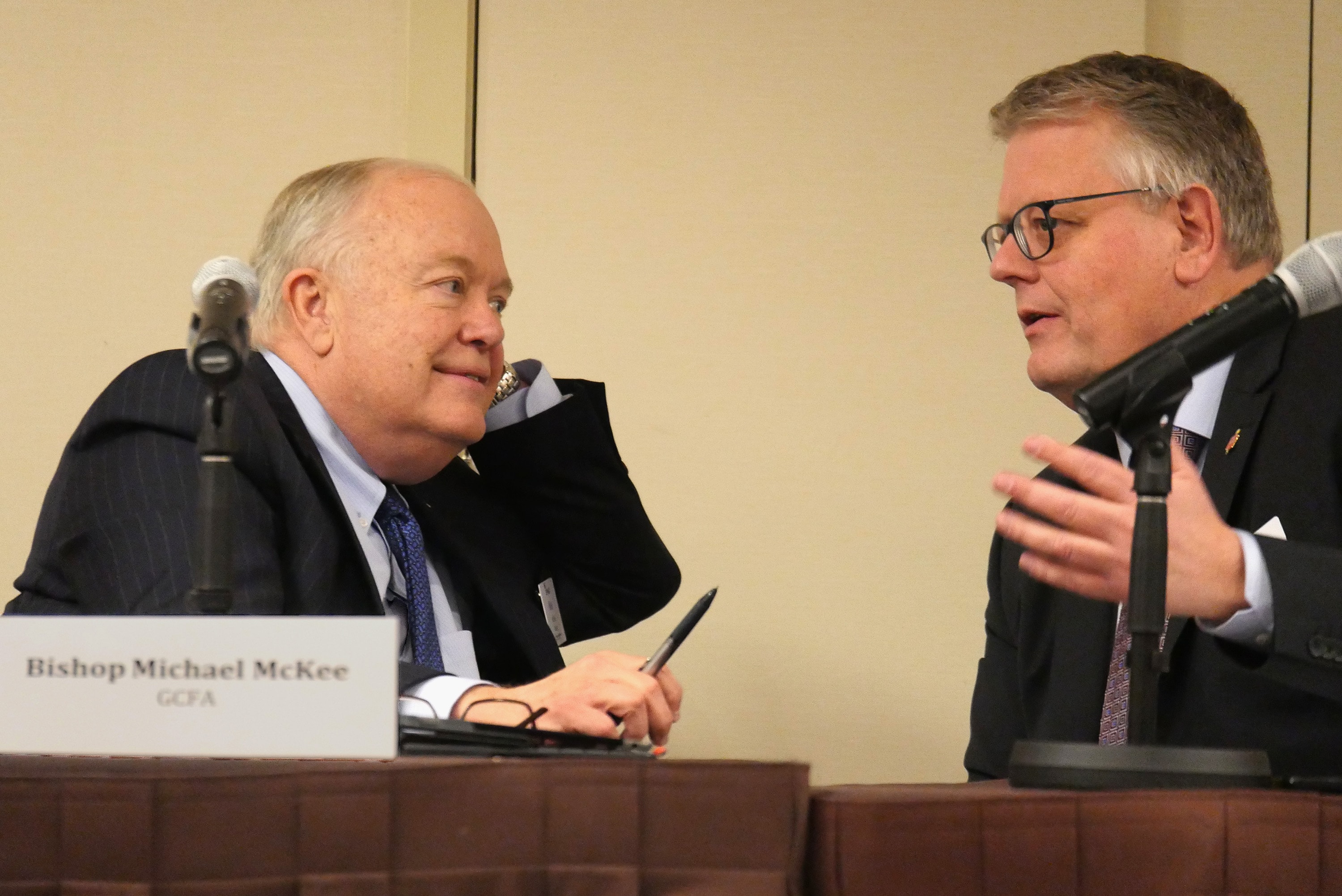 Bishops Mike McKee and Christian Alsted discuss the process for voting on budget proposals during a joint meeting of the General Council on Finance and Administration board and Connectional Table in Nashville, Tenn. McKee is president of the finance agency board and Alsted is chair of the Connectional Table. Photo by Heather Hahn, UMNS.

The two groups responsible for putting together the general church budget approved a plan for how to divide significantly reduced funds.

The groups’ votes April 4 culminated nearly a week of discussions — which were tense at times — about how to slice a much smaller financial pie, while leaving ministries with more than just crusts.

During the joint meeting, the Connectional Table, as coordinator of the work of general agencies, approved the plan by a vote of 29 to three. The board of the denomination’s finance agency decided by a much narrower margin, with nine in favor, eight opposed and one abstention. Agency top executives have voice but not vote on the Connectional Table.

“We have an agreement,” said North Texas Conference Bishop Mike McKee, president of the finance agency board, immediately after the votes. “I remind you it’s not overwhelming, but it is an agreement.”

The Rev. Steve Wood, chair of the finance agency’s General Agency and Episcopal Matters Committee, acknowledged the tension up front.

“All need to share in the reductions as a connectional network including the smaller funds,” Wood told the board. His committee drafted three potential budget models that would instead curtail United Methodist Communication’s budget by 28.2 percent to 31 percent while reducing the budgets of other agencies.

“The current allocation to UMCom is disproportionate to the big picture,” he said.

The Connectional Table and General Council on Finance and Administration board have agreed to the following reductions in the 2021-2024 budget:

In a separate vote March 29, the General Council on Finance and Administration approved the following changes:

However, California-Nevada Conference Bishop Minerva Carcaño, another board member, cautioned that by pushing the Connectional Table to adopt one of the models the finance agency might be overstepping its bounds.

“The Connectional Table at some point made the decision to not cut some because of the value and importance of their work, and because to cut them would be unfair and unjust,” she said.

With the April 4 action, the General Council on Finance and Administration can begin drafting the reports for the 2021-2024 general church budget that will head to the 2020 General Conference. Ultimately, the denomination’s multinational legislative assembly has final say on the size and allocation of the budget.

As it stands, the finance agency is proposing a $493.8 million budget — the smallest in more than 20 years. According to the Commission on Archives and History, the last time General Conference approved a budget below $500 million was in 1992.

The budget still could face further adjustments before heading to General Conference, depending on financial forecasts for the denomination next February.

Nordic-Baltic Area Bishop Christian Alsted, the Connectional Table’s chair, noted that behind the numbers are people.

“We pray especially for general secretaries and the people in human resources,” he prayed after the vote. “As they are about to make difficult decisions, we ask that you give them guidance and the wisdom and also the care that they will need.”

The Book of Discipline, the denomination’s policy book, gives the General Council on Finance Administration board authority to determine the amount available for apportioned funds.

Under the Discipline, the Connectional Table has responsibility for allocating general church giving among the other apportioned funds.

The Discipline requires that both the board and Connectional Table agree on the funding levels proposed to General Conference.

Adding to the challenges of this budget process is that both groups had significantly less money to distribute.

In August, the finance agency board unanimously approved changes in the formula used in calculating U.S. apportionments to reduce the requested giving from U.S. annual conferences. In November, the Connectional Table asked the board to reconsider but it continued to press ahead with reductions.

The formula changes initially meant an overall cut to the general church budget of 17.4%. But because of the planned addition of five new African bishops, the Episcopal Fund actually would need to increase. That meant other funds would have to make up the difference.

On March 29, the board voted for further cuts on the recommendation of the Economic Advisory Committee, a group of United Methodist financial forecasters. Following the tumultuous special General Conference and continued losses in U.S. church attendance, the committee urged the board to cut another $4.9 million, resulting in the overall denominational budget dropping by 18.3%.

Of the additional cuts, the board absorbed $2 million in the two funds it oversees. 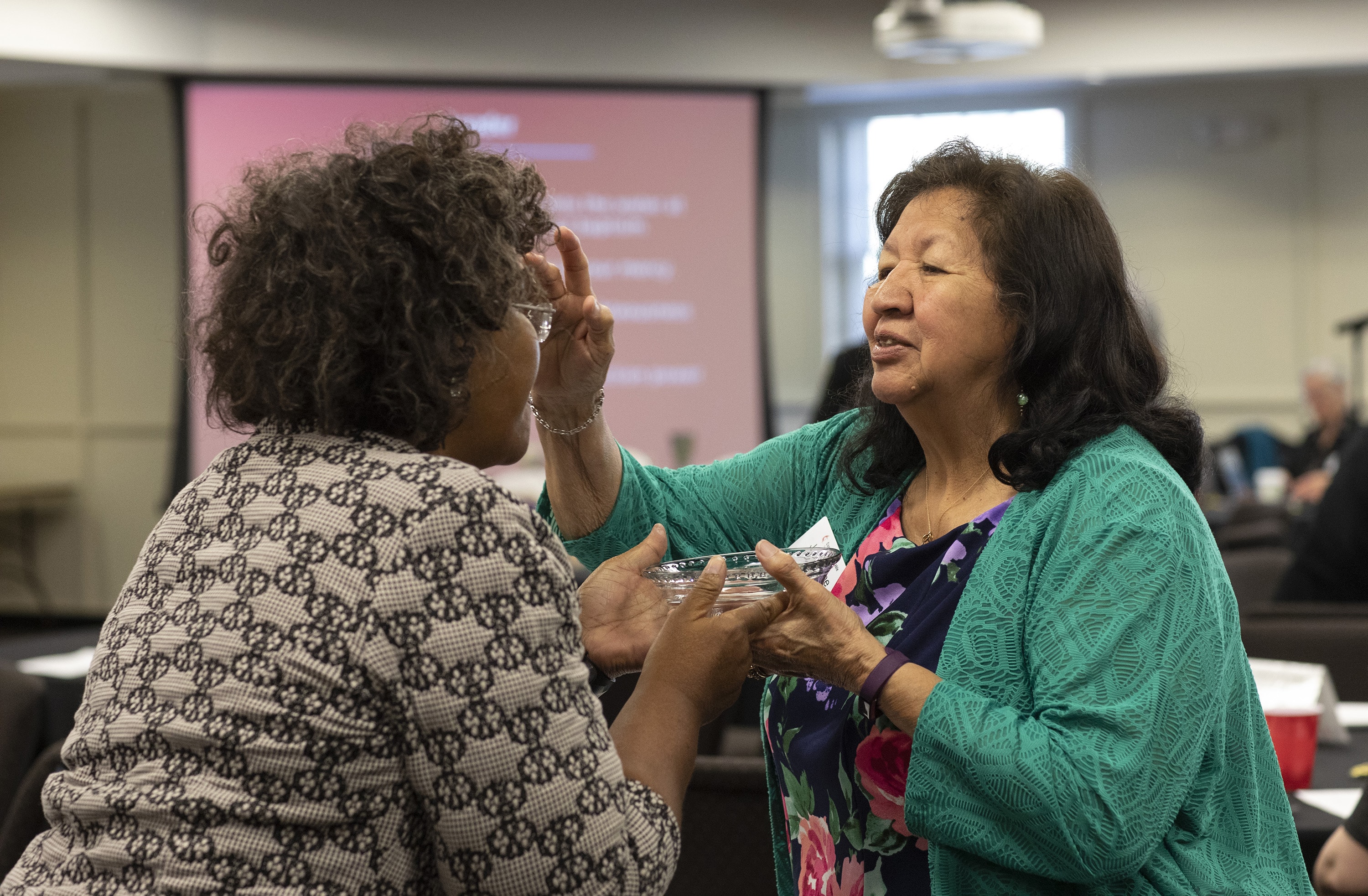 That left the Connectional Table with $358.6 million to distribute among its funds and agencies — a 23.3% reduction from the current budget.

Throughout its budgeting process, the Connectional Table has been clear that not all ministries would bear the brunt equally of planned budget cuts. A big concern for the group was making sure cuts were not so deep to stop the work of the denomination’s smallest agencies and six national plans for ethnic ministries.

“We felt we couldn’t just apply a 23% reduction across the board and stay faithful to the values we talked about,” said the Rev. Brad Brady, a member of the Connectional Table’s allocations team.

With that in mind, the Connectional Table recommended that the allocations for the Commissions on the Status and Role of Women, Religion and Race and United Methodist Men and the national plans each decrease by less than 1 percent. These groups also received the smallest share of general church apportionments.

The steepest cut was the allocation for the Interdenominational Cooperation Fund by nearly 88% — reducing its apportionment from about $8 million to under $1 million in 2021-24. The fund disburses grants to ecumenical organizations; however, by the end of 2017 it had accumulated reserves four times its 2017 expenses.

“I think we can manage with what is being proposed here, but it will cause us to use up all of those reserves,” Bishop B. Michael Watson, the Council of Bishops ecumenical officer, told the Connectional Table on April 2. “I would also say it is unfortunate that we have not had some better guidance on what reserves should be. Going from feast to famine is not necessarily the best way to go.”

More controversial was the Connectional Table’s next biggest cut — the 35% reduction for United Methodist Communications, taking it from $71.6 million to $46.6 million.

The Boards of Global Ministries, Church and Society, and Higher Education and Ministry will each see reductions of 20%. Discipleship Ministries, which has the lowest percentage of net assets compared to expenses, will see a 15.5% cut.

Dan Krause, the agency’s top executive, told both the Connectional Table and General Council on Finance and Administration in separate meetings that he has never received a clear rationale for his agency’s deeper loss compared to its peers.

He said the Connectional Table's allocation letter indicated the deep cuts were because of the agency’s net assets and reserves, but the same letter showed higher net assets and reserves as a percentage of the operating budgets of other agencies and funds for groups that receive World Service dollars. Those agencies and groups received lower percentage reductions than United Methodist Communications, Krause said. He said the agency was later told it had a larger budget than for-profit marketing firms, but he noted his agency does more than marketing.

“Then the third explanation was that we don’t work well with other agencies,” Krause said during the April 4 meeting. “I believe we work well with all of our peers.”

Bottom line, she and others on the Connectional Table allocations team said they think the agency has the reserves and assets to make it through tight times.

“General Conference can go beyond the projected amount and add whatever it wants,” he said.

Hahn is a multimedia reporter for United Methodist News Service. Jim Patterson contributed to this report. Contact them at (615) 742-5470 or [email protected]. To read more United Methodist news, subscribe to the free Daily or Weekly Digests.

Churches and conferences are unhappy about higher premium notices from United Methodist Insurance that arrived just before Christmas.
General Church

A Connectional Table team recommends substantial cuts for some church organizations and programs while holding the line for others in the 2021-24 church budget.
General Church

United Methodist general agencies are looking at how they can tighten their belts as they face plans to cut the general church budget by more than 20 percent.