The United Methodist Church continues to face a financial hangover from the 2019 General Conference in St. Louis, where passage of the Traditional Plan led unhappy churches and individuals to a range of resistance actions, including withholding money.

Board members of the denomination’s General Council on Finance and Administration, meeting July 18-19, learned that this year’s January-to-June annual conference apportionment remittances to the seven general church funds were $4.9 million behind the first half of 2018.

The lag comes despite a strong U.S. economy. Churches in the U.S. provide the bulk of funding for general church ministries.

“There was an initial reaction to St. Louis that just happened dramatically, and I think we ought to name that,” said North Texas Conference’s Bishop Michael McKee, who serves as GCFA board president.

In the Dallas meeting, the board was, as usual, focused on the nuts and bolts of the denomination’s finances, and discussed a range of money matters in committee and plenary sessions.

But General Conference 2019 — which underscored deep divisions over how accepting to be of homosexuality and has led to intensifying discussions about whether the denomination can or should stay together — was always in the background.

McKee said the 438 to 384 vote for the Traditional Plan, reinforcing bans on same-sex unions and ordination of “self-avowed practicing” gay clergy, pleased many but left many others deeply unhappy. He noted the North Texas Conference is among those with churches withholding apportionment payments.

The Desert Southwest Conference recently reported that its apportionment receipts have declined for five consecutive months, and the conference is on track to have its worst ever apportionment contribution percentage.

One of the charts presented at the GCFA board meeting in Dallas showed apportionment collection rates through June were down for all seven general church funds, and down about 3 percent overall, compared to January-June 2018.

Another chart showed that the 2019 percentage of apportionments collected for the World Service Fund (which supports eight general church agencies, the Connectional Table and a contingency fund) is projected to be below that of the recession year 2009.

But the apportionment payment picture, compared to 2018, varies a good bit from conference to conference. 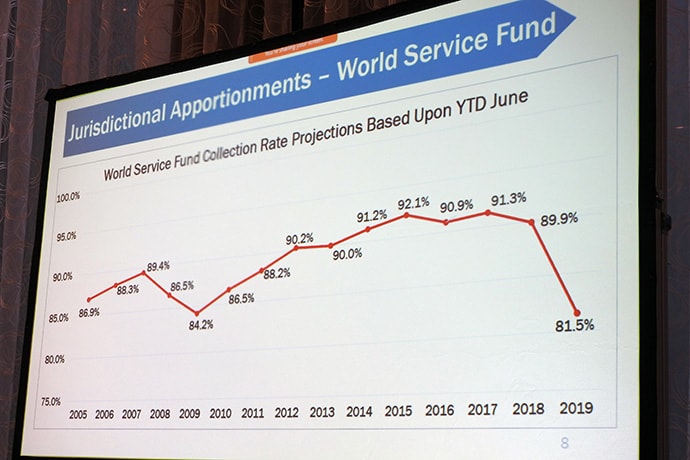 A chart prepared for the latest General Council on Finance and Administration board meeting illustrates reduced giving in The United Methodist Church this year. Based on results through June, the apportionments collection rate for the World Service Fund, one of seven general church funds, is running behind that of 2009, a recession year. Photo by Sam Hodges, UM News.
Bishop Minerva Carcaño leads the California-Nevada Conference, and she said apportionment payments there are up this year.

Carcaño, a GCFA board member, called passage of the Traditional Plan hurtful but, with her cabinet, has argued against withholding apportionment payments, saying that to do so harms vital ministries.

“We’re trying to lead and holding up what I believe is the heart of our conference, and affirming that heart, in terms of wanting to be part of this connectional church,” she said. “It is our church, and we’re going to continue to help it be better.”

The Episcopal Fund already is strained by the number of bishops and is drawing on reserve funds in 2019. The 2016 General Conference approved adding five more bishops in Africa by 2021.

One chart shown at the Dallas meeting projected various years for the exhausting the Episcopal Fund reserves, depending on apportionment collection rates. At an 85 percent rate, the fund goes in the red by 2024.

The Rev. Steve Wood, who chairs the GCFA committee that deals with episcopal matters, called the current financing model for the Episcopal Fund unsustainable. He believes that options — including reducing the number of bishops and episcopal areas, reducing compensation and benefits and raising apportionments — must be considered.

“We’re going to have to prayerfully consider how that will be dealt with,” he said. "There’s not that many variables.”

GCFA board members also heard a report from Lonnie Chafin, Northern Illinois Conference treasurer, about the work of the Jurisdictional Study Committee. It’s studying options for setting the number and boundaries of jurisdictions and episcopal areas in the U.S.

Moses Kumar, top executive of GCFA, encouraged board members and others at the meeting to spread the word about the need for generous giving. So did Rick King, chief financial officer. 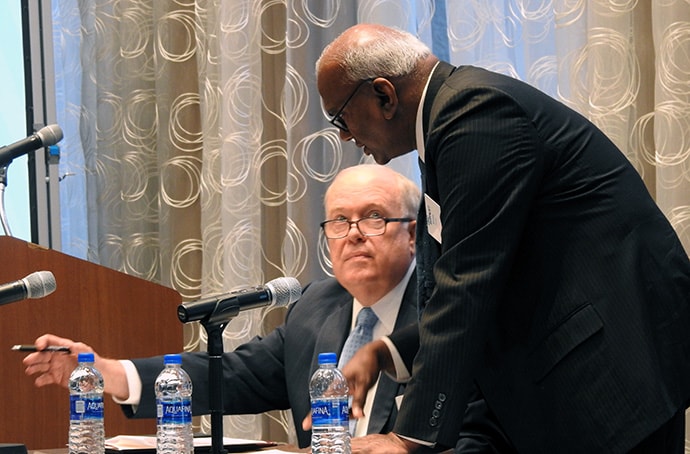 Bishop Michael McKee, president of the General Council on Finance and Administration, confers with Moses Kumar, GCFA’s top executive, on July 19 in Dallas. GCFA’s board heard that giving across the church is down since the 2019 General Conference in February. Photo by Sam Hodges, UM News.
“It’s on all of us as leaders of the church to explain some of the unintended consequences of withholding apportionments,” he said.

However, Kumar noted that the overall giving picture has brightened some since the immediate aftermath of the St. Louis meeting.

McKee said he’s optimistic that giving will “smooth out” and show the current projections to have been too low.

GCFA is recommending a $493.8 million general church budget for 2021-24, the smallest in more than 20 years. The plan, worked out with the Connectional Table, calls for deep spending cuts by agencies.

But Kumar noted that giving patterns, financial forecasts and other data could result in adjustments early next year. The 2020 General Conference, to meet May 5-15 in Minneapolis, will have final say over the quadrennial budget.

In other GCFA developments, the board:

• Learned that though the Commission on a Way Forward had been budgeted for about $1.48 million, its expenditures were about $470,000 under that amount. The commission spent less than expected on travel and meeting facilities.

Many congregations and affiliated nonprofits in the U.S. are stepping up efforts to help low-income people squeezed by inflation and affordable housing shortages.
General Agencies