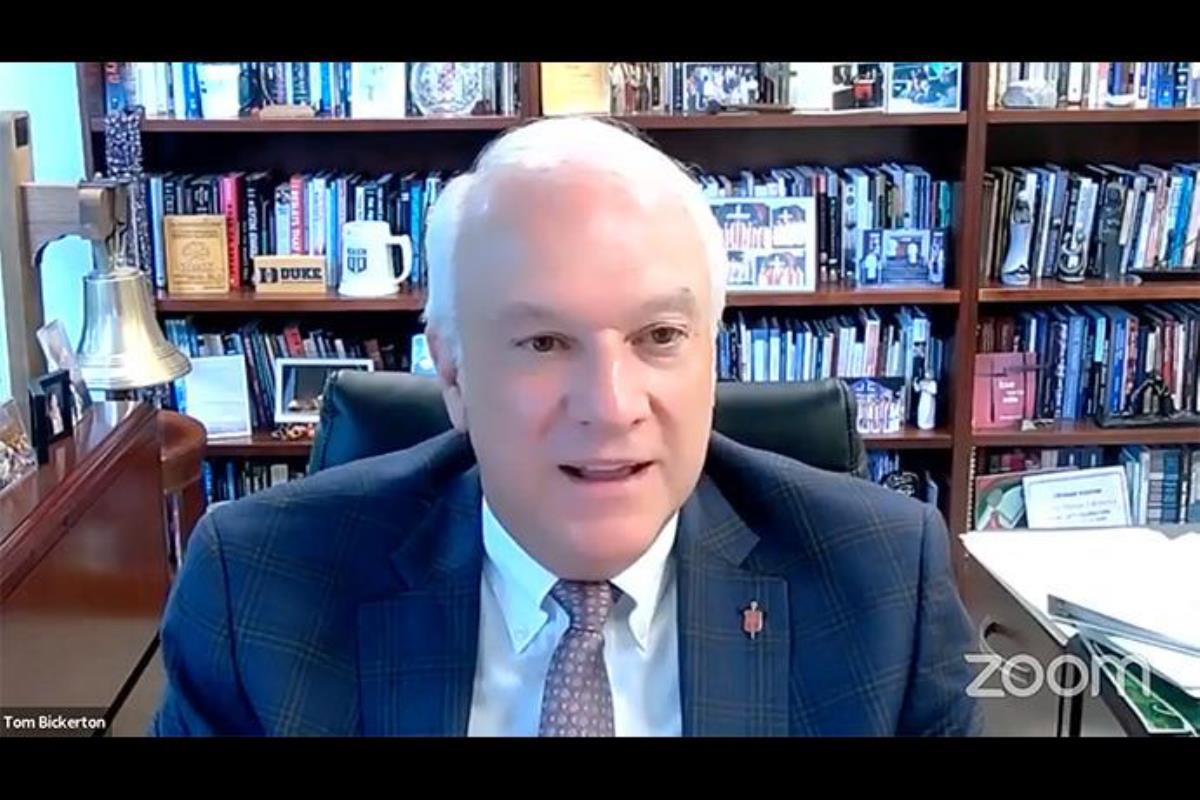 Amid a summer of denominational discontent, Council of Bishops President Thomas J. Bickerton called on fellow bishops and church members to begin pivoting The United Methodist Church toward a hope-filled future.

Bickerton also decried what he called “a constant barrage of negative rhetoric that is filled with falsehood and inaccuracies” coming from backers of a breakaway theologically conservative denomination that launched in May.

He specifically disputed claims that United Methodist leaders are abandoning the denomination’s doctrinal standards in the Articles of Religion, that they do not embrace the primacy of the Bible and that they do not believe Jesus Christ is the son of God.

While The United Methodist Church will maintain basic Christian teachings and its historic roots in Wesleyan theology, Bickerton said he does expect United Methodists to make changes. Those changes include recapturing a spirit of evangelism, practicing the church’s theology of mission and confronting the sin of racism.

“It is time, in our role as leaders, to initiate a conversation about what it is we want and dream about as a church moving forward,” Bickerton said Aug. 22 in his first formal address as the bishops’ president. “What do we see as the next expression of Methodism? What kind of church do we envision in the ongoing United Methodist Church?”

Bickerton also leads the New York Conference. The address is archived on the Council of Bishops Facebook page.

The Council of Bishops is meeting this week to discuss various challenges facing the denomination and to begin planning for its future. The next open session will be on the bishops’ Facebook page at 9 a.m. U.S. Eastern time Aug. 26.

The bishops are gathering at a time when a number of congregations and church leaders are trying to discern whether they want to remain part of The United Methodist Church.

After decades of intensifying disagreements about the status of LGBTQ people in the church, General Conference — the denomination’s top lawmaking body — was set to vote on a denominational separation plan in May 2020.

But after COVID-related complications delayed General Conference a third time to 2024, organizers went ahead and launched the theologically conservative Global Methodist Church on May 1.

Since then, those who worked to form the denomination have been trying to recruit as many United Methodists as possible to the new fold. Those recruiting include the Wesleyan Covenant Association, an unofficial advocacy group that announced in May it would stick around to help congregations that want to leave The United Methodist Church.

But amid their recruiting, some supporters of the new denomination have accused United Methodist bishops and other church leaders of not holding with core Christian doctrines such as the virgin birth, the divinity of Jesus Christ, the resurrection of Jesus Christ or salvation through Christ alone.

Such accusations have led to repeated questions to Ask The UMC, a ministry of United Methodist Communications that answers queries about church teachings. Ask The UMC has responded that all of these positions are bedrock in the denomination’s doctrinal standards and are not about to change.

At the same time, some are calling for The United Methodist Church to have a comity agreement with the new denomination to ease transitions to the Global Methodist Church.

Bickerton acknowledged that The United Methodist Church and its predecessors have a long history of building ecumenical relations with Christian denominations that have taken various stances on homosexuality. However, Bickerton said those relationships “are completely dependent upon each side recognizing the inherent and God-given worth of the other.”

“We would have never entered into a relationship with a group that wanted our recognition but could only criticize us in return,” he added. “This is not how we, as Christian people, do our work.”

Jay Therrell, president of the Wesleyan Covenant Association, over the past two weeks has urged the group’s constituents to take more direct action against The United Methodist Church.

He urged constituents to escrow or withhold apportionments — shares of giving that support ministry beyond the local church — from annual conferences he argues make it too hard for churches to disaffiliate.

Therrell also called on constituents to file complaints against bishops and other conference leaders they believe are not upholding the denomination’s bans on same-sex weddings and “self-avowed practicing” gay clergy. A number of bishops have agreed to hold complaints related to homosexuality in abeyance while the denomination’s transition shakes itself out.

In his presidential address, Bickerton expressed gratitude to clergy and laity who continue to give apportionments.

He also explicitly called out both the Global Methodist Church and the Wesleyan Covenant Association by name.

“I ask the members of the GMC and the WCA to stop this negative rhetoric of accusations and statements that are just not true,” Bickerton said. “It damages our public witness as Christians and does little to invite people into the hope-filled story of God’s love.”

After Bickerton's address, Therrell shared with UM News and others that he knows of "no one at any level of leadership in the Wesleyan Covenant Association or the Global Methodist Church that has said the doctrinal standards of The United Methodist Church have changed or will change."

Bickerton called on United Methodists not to return an “eye for an eye” but to spread scriptural holiness across the land and invite “a broken world into the possibility of being a part of a story that will change their lives.”

Part of healing a broken world, he and other bishops said, requires The United Methodist Church to address the sins of racism and colonialism.

During the meeting, the bishops voted to make their work against racism a more permanent part of their ministry by changing their Anti-Racism Task Force into the Anti-Racism Leadership Team.

The bishops and other observers also heard an overview of how colonialism has shaped world history and how The United Methodist Church developed.

“While colonialism may seem to be a thing of the past,” said Bishop LaTrelle Easterling, chair of the Anti-Racism Leadership Team, “it is very present in every aspect of our society, and its vestiges will infect our future if we are not intentional in understanding and addressing them.”

David W. Scott, the director of mission theology at United Methodist Global Ministries, said colonialism has not only shaped the secular world but also the Christian church, including The United Methodist Church.

He said that nowhere is that colonial mindset more evident than in the denomination’s governance, which “privileges what happens in the United States as the most important thing going on in The United Methodist Church.”

Bickerton said the church’s work toward a more equitable future and its current efforts to respond to disaster such as Kentucky’s floods and help people forced from their homes in Ukraine are just a few examples of how the church tries to live out Christ’s call.

“Church, there is a way through the storm and a course that can be followed that will lead us to the other side,” Bickerton said at the conclusion of his address. “It will not be done in isolation. It cannot be done relying upon our own ideas. It must not be done without the power and presence of Christ in our midst.”

A national day of prayer and fasting on Feb. 1 has been declared by the Rev. Dennis Blackwell and the group Black Methodists for a Better Future to ask for God’s help curbing gun, domestic and economic violence as well as systemic racism.
Human Rights

In an annual letter to the civil rights icon, the Rev. Reggie Lee celebrates victories by Black candidates for both U.S. Senate and the episcopacy of The United Methodist Church as signs of King’s dream coming to fruition.
Church History

A book by an Episcopal priest explores the life of his great-great-grandfather, a Methodist clergyman and abolitionist.