“Every United Methodist now knows our denomination is heading for a separation,” Sierra Leone Bishop John K. Yambasu said in an address to a diverse group of church leaders meeting in Chicago.

But the bishop also called on the group attending the July 19 meeting to find a new way forward through consensus. He was speaking to a group with a wide range of viewpoints about the denomination’s inclusion of LGBTQ persons during a meeting that he termed “a call to action.”

Yambasu called the meeting on behalf of the central conferences — United Methodist regions in Africa, Europe, and the Philippines. Bishop Christian Alsted, Nordic and Baltic Episcopal Area, and Bishop Mande Muyombo, North Katanga Episcopal Area, attended the meeting. The meeting came at the conclusion of the executive committee of the Council of Bishops meeting.

In addition to the three bishops, five church leaders who represented each of three viewpoints on the inclusion of LGBTQ people in the mission and ministry of The United Methodist Church attended. There were five centrists, five progressives and five conservatives at the meeting.

The Book of Discipline, the United Methodist policy book, says that the practice of homosexuality “is incompatible with Christian teaching,” and bars “self-avowed practicing homosexuals” from ordination. Meeting in a called session this year, General Conference delegates passed legislation that retains church bans on ordaining gay clergy or holding same-sex marriages, while also strengthening enforcement measures for violating those bans. Resistance to that measure has been strong in many churches and regional or annual conferences.

In his opening address, Yambasu said it was his “burning desire” to work with all sides of the debate to ensure there is no further damage to the whole church.

Bishop Kenneth H. Carter Jr., president of the Council of Bishops, said bishops are involved in many conversations across the church but “we want to be clear that the complexities of our polity do not authorize anyone to negotiate separation.”

Carter told United Methodist News that “more conversation is better than less and may lead us to new forms of unity, giving birth to new expressions of Methodism that will multiply the Wesleyan witness in as many ways as possible.”

Alsted said from a European United Methodist perspective, a division would most likely have “devastating consequences.”

“In all plans after the called session I have seen so far, the central conferences are treated as an appendix to the church. The message that is conveyed is: We solve things in the U.S., and the rest of the world will need to figure out where they wish to belong or how they will organize.”

Both Yambasu and Alsted said they were hopeful having all the different viewpoints represented and in the same room would lead to a consensus plan and avoid another battle on the floor of the 2020 General Conference. 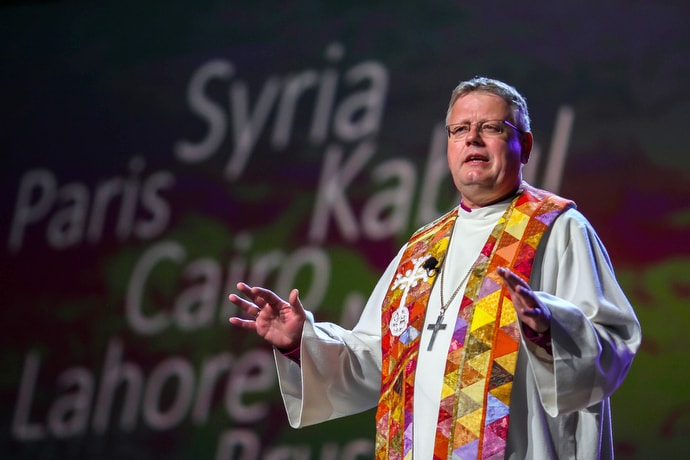 Bishop Christian Alsted preaches during morning worship at the 2016 United Methodist General Conference in Portland, Ore. Alsted, leader of the Nordic and Baltic Area, said that from a European United Methodist perspective, a division of the church would most likely have “devastating consequences.” File photo by Maile Bradfield, UM News.
A second, smaller group will meet Aug. 16-17 in Washington. The meeting in July was closed, and members all agreed not to discuss any of the details. The second meeting will also be closed, Yambasu said.

Petitions to the 2020 General Conference are due Sept. 18 to the Commission on General Conference. Yambasu said the meetings were scheduled to allow time to process any petitions that emerge from the conversations and meet that petition deadline.

While they could not discuss the details, church leaders said they did appreciate the opportunity to talk to each other. Centrists included the Revs. Adam Hamilton, Tom Berlin, Mark Holland, Junius Dotson and Jasmine Smothers.

“We had a frank conversation and good airing of several proposals for moving past what some members of the group identified as ‘irreconcilable differences,’” said Randall Miller, a jurisdictional conference delegate from the California-Nevada Conference. “I will continue to work with this group in faith, but so far we seem very far away from reaching an agreement.”

Hamilton, pastor of the Church of the Resurrection, said it was helpful to meet “face to face” with people and hear their stories.

“Not surprisingly, the central conference bishops, conservatives, centrists and progressives present agree on most of the things that make us United Methodists. But we have a fundamental disagreement over how we read scripture regarding same-sex marriage and how God would have us minister with LGBTQ persons, particularly around marriage and ordination,” he said.

Boyette, president of the Wesleyan Covenant Association, said he was grateful to have the opportunity to have frank conversations about the current context of The United Methodist Church.

“I am grateful that those conversations will continue, and I am hopeful that they will be productive in providing some resolution for the ongoing conflict,” he said.

Berlin told United Methodist News, “I was pleased that the meeting was called by central conference bishops who understand that the impact of the 2019 General Conference, which passed the Traditional Plan, will impact the global UMC connection and is not only of deep interest to members of the UMC in the United States.”

Tooley said he has opposed division and for 30 years has worked for a “vision of denominational revival.”

“I now admit division is inevitable,” he said. “It will happen of itself, chaotically. Or it will happen through negotiation and some leadership. The latter seems preferable.”

Holland said he is committed to finding an amicable path forward for separation.

“My observation is that the ‘Renewal and Reform’ group very much wants to split the church and divide up the assets. The progressives, centrists, and central conferences want to stay together. There is no reason to divide the global church to cater to a minority of churches and individuals in the United States. We need to find a way to allow those who do not want to be United Methodist to leave amicably without burning down the whole church to do so.”

Yambasu, quoting Isaiah 1:18, said the conversation was not about who is right and who is wrong.

“This consultation is a call to action. It is an invitation for all sides of the debate to ‘come and reason together.’”