A half century ago, retired Bishop D. Max Whitfield was a young pastor still taking courses at Perkins School of Theology. He went from studying Methodist polity to having a bit part in United Methodist history, serving as a page and marshal at the Uniting Conference.

For much of April 23 to May 4, 1968, Whitfield was at Dallas Memorial Auditorium, running hither and yon, but also pausing to marvel as the Methodist Church and Evangelical United Brethren Church became The United Methodist Church.

He recalls especially the procession of bishops and banner-carrying representatives from countries where the new denomination had a presence.

“For the first time in my life, I recognized the nature of the church, how wide and broad it really was,” Whitfield said. “Gosh, it was amazing to me.”

Today is The United Methodist Church’s 50th birthday. There are plenty of people around who attended the service that officially created the denomination and the conference that marked its first days.

Most look back with qualified nostalgia.

“The church was hopeful. We felt (the unification) was an accomplishment,” said the Rev. J. Spurgeon McCartt, a 95-year-old retired elder who attended as a Holston Conference delegate. “But the country was in chaos.” 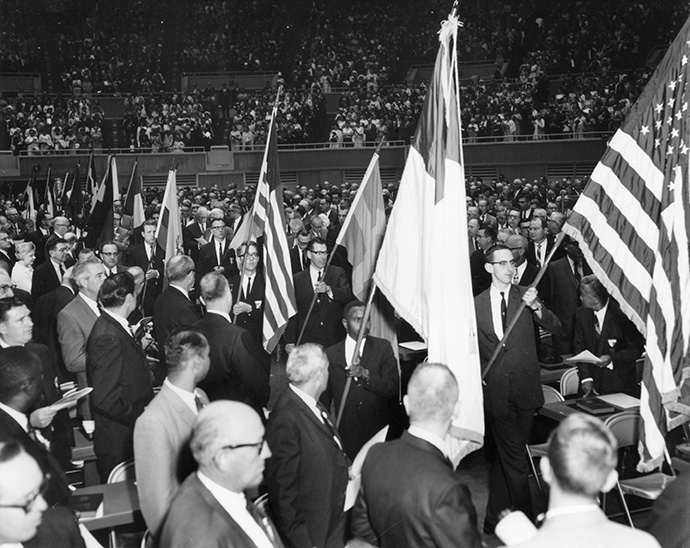 The Rev. Martin Luther King Jr. had been assassinated earlier in the month, sparking race riots. Protests against the Vietnam War had become widespread, particularly on college campuses.

The new denomination had its own issues. Those included trying to integrate African-Americans who had, in the Methodist Church, long been in their own Central Jurisdiction. 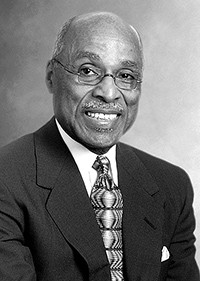 “We were for union. We supported that,” said the Rev. Zan Wesley Holmes Jr., a renowned African-American elder and civil rights activist in Dallas who attended the Uniting Conference as a young pastor and recent co-founder of Black Methodists for Church Renewal.

“But at the same time, we wanted to be sure that our rights and our privileges were respected, in terms of representation in boards and agencies, in the life of the new church.”

Indeed, 15 members of Black Methodists for Church Renewal, led by the Rev. Cecil Williams, would hold a silent vigil in front of the auditorium, and later press for hiring African-Americans in administrative jobs at United Methodist Publishing House.

Lots of other lobbying and wrangling would occur among the new United Methodists, but also a feeling that they were part of something extraordinary.

“It was history-making,” said the Rev. Donna Lindberg, a retired elder who was then a Perkins student and conference page. “I felt really special to be at that place at that time.”

For Mary Brooke Casad, who attended as a 12-year-old with her parents (the Rev. Benjamin Oliphint, later a bishop, and Nancy Oliphint), the conference would determine her course as a deeply involved layperson.

“It did set the stage for me,” said Casad, a former Connectional Table top executive. “I thought, ‘Well, that’s so impressive, so inspiring. I want to be a part of this.’” 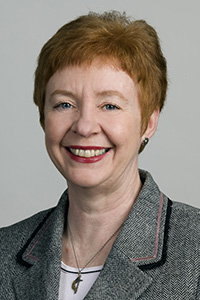 The April 23 uniting service officially created the second-largest denomination in mainline Protestantism, with 11 million members. The event was big news, drawing live TV coverage in Dallas, daily coverage in the Dallas Morning News, and reports by the Associated Press and The New York Times.

The Rev. Margery Schleicher, another Uniting Conference page, recalled the national press’ interest in whether presidential candidate George Wallace would come. The former Alabama governor, known for segregationist stands, had been elected a delegate from the Alabama-West Florida Conference. Ultimately, he did not attend.

The union of the Methodist Church and Evangelical United Brethren Church had long been in the works, leading to affirmative votes by the respective bodies two years earlier. But support was stronger in the Methodist Church than in the much smaller Evangelical United Brethren Church, and that was on conference organizers’ minds.

“I think a common concern was to involve EUB representation and views at every level of planning the Uniting Conference, so that it (the event) not be perceived as a takeover corporate merger,” said the Rev. Carlton Young, 91, who served as conference music director and later edited The United Methodist Hymnal.

An example was the seminarians’ choir Young directed for the conference. Singers came from four schools, two affiliated with the Methodist Church and two with the EUB.

As for the many Charles Wesley hymns sung (four in the uniting service alone), Young said: “That was probably thought to be middle ground.” 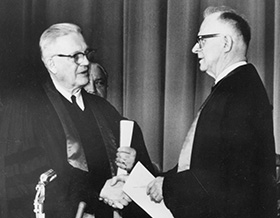 The uniting service’s key photo-op featured EUB Bishop Reuben H. Mueller and Methodist Church Bishop Lloyd C. Wicke clasping hands for the moment of union, saying together: “Lord of the church, we are united in thee, in thy church, and now in The United Methodist Church,” with the crowd of 10,000 booming “amen!”

The balancing imagery continued as different age-group representatives reenacted the handshake and words.

Rhonda Renfro was then a little girl from Dallas’ St. Paul Methodist Church, a historic African-American congregation. She was chosen to shake hands with Robert O. Tupper II of Oklahoma, a white boy representing the EUB.

Renfro, still a Dallas-area resident, has reflected on the statement made by their spotlight moment.

“It was very symbolic of them to have me and Robert,” she said. “It was another way to join the races.”

The uniting service, with a still-talked-about sermon by the Rev. Albert C. Outler, is the best-remembered single event. But the conference also had a musical drama by black Methodist college students, and a memorial service for King, with the Rev. Joseph Lowery, one of Methodism’s key civil rights leaders, offering prayer.

Special events and services were plentiful, but important business got done in Dallas, too.

For example, delegates created the General Commission on Religion and Race. That decision, with the Central Jurisdiction dissolution and commitment of $20 million toward combatting poverty and discrimination, cheered many at the conference. 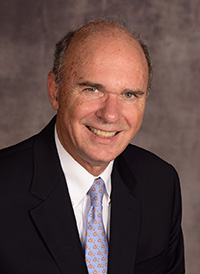 Bishop Peter Weaver
Photo courtesy of the Council of Bishops

“It was a time of great hopes that matters of justice and a new wind in the church would prevail,” said retired Bishop Peter Weaver, who attended as a Drew Theological School student.

Delegates also created the Ministerial Education Fund to support theological education, allowed autonomy for 1.5 million overseas members wanting to form their own denominations or affiliate with united churches, and established a study commission for a new doctrinal statement. They approved creation of official insignias for the denomination, a crucial step toward development of the cross and flame emblem later in 1968.

In a headline-grabbing decision, delegates dropped the requirement that ministerial candidates pledge not to use alcohol and tobacco. In its place went a broader pledge that addressed the need to control “personal habits” but also to show “emotional maturity, social responsibility and growth in grace and knowledge of God.”

Conference leaders insisted it was a higher standard, but many in the new church disagreed. Casad remembers her father getting a telegram at their hotel at 2 a.m., urging him to stick with the alcohol and tobacco ban.

“Here I was, a graduate of Duke University, (formed from) a tobacco empire,” he said, laughing.

Particularly contentious in conservative Dallas was the passing of a resolution supporting nonviolent civil disobedience.

One day after the conference, the Rev. William Dickinson of Highland Park United Methodist Church in Dallas preached that “the resources of this church will be not be involved in any way … to encourage civil disobedience or the breakdown of law and order.”

“Yet I found it to be a very thoughtful, carefully crafted piece of legislation that called us to be responsive to God and to anticipate and expect punishment for the breaking of laws (through civil disobedience),” he said.

The 1968 Uniting Conference in Dallas was the occasion for special publications such as the ones at left and center. The Daily Christian Advocate provided news and feature stories as the event unfolded. Bridwell Library at Perkins School of Theology has these and many other conference mementos. Photo by Sam Hodges, UMNS

For the Rev. John Painter, who attended with friend Weaver from Drew, the Uniting Conference offered thrilling moments, such as when thousands stood and sang Wesley hymns. “Glorious,” he recalled.

But Painter felt the Uniting Conference didn’t live up to its name.

“There was a lot we had not settled and we were very far from being united,” he said.

When he returned to the Livingston, New Jersey, church where he was youth pastor, Painter preached about the conference. He carefully titled his sermon “The Untied Methodist Church.”

And “Untied” went in the bulletin, but not without struggle.

“It was heck to get the secretary not to change that,” Painter said.

The Rev. Lynn DeMoss, a retired Michigan Conference elder, worries about the outcome of that meeting. Fifty years ago, as an observer at the Uniting Conference, his emotions were different.

“My reaction was excitement, and feeling part of a great moment in the life of the church.”

Dale Patterson looks backward and forward as he contemplates retirement from the United Methodist Commission on Archives and History.
Mission and Ministry

“The Bible of the Bear,” the first complete Bible translation to Spanish, will be celebrated at a ceremony in San Antonio.
General Church

The Rev. Kim Cape will retire as top executive of The United Methodist Board of Higher Education and Ministry on June 1.