For the most important sermon of the 1968 conference uniting the Methodist Church and Evangelical United Brethren Church, organizers turned to “Mr. Methodist,” the Rev. Albert C. Outler.

The famed Wesley scholar and ecumenist also was a top-tier preacher, and he measured up to the historic occasion, delivering an address that’s still talked about 50 years later.

“The sermon itself is vintage Outler,” said the Rev. William Abraham, the Albert Cook Outler professor of Wesley Studies at United Methodist Perkins School of Theology. “It’s brilliant rhetorically, with amazing vivacity and turn of phrase.”

Outler, speaking in Dallas at the uniting service of the Uniting Conference, celebrated the creation of The United Methodist Church. But he also pushed for it to be catholic, evangelical and reformed, teasing out what he meant by each adjective, and building to a stirring, poetic conclusion: 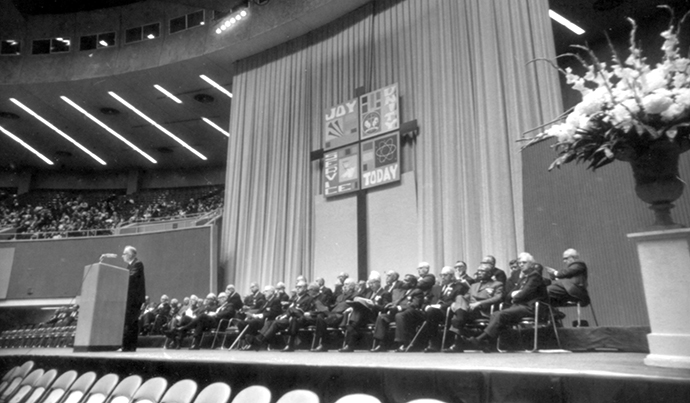 The Rev. Albert C. Outler preaches during the April 23, 1968, uniting service of the Uniting Conference, in Dallas. Outler, a renowned professor at Perkins School of Theology, spoke just before the official creation of The United Methodist Church from union of the Methodist Church and Evangelical United Brethren Church. Photo courtesy of United Methodist Commission on Archives and History.

When Outler finished, the 10,000 people at Dallas Memorial Auditorium stood and gave him prolonged applause.

“A lot of people have talked about what an ovation it was,” said the Rev. Leicester Longden, a retired seminary professor who wrote his dissertation on Outler and is planning a biography. “He hit the nail on the head that day.”

Outler was 59 and in the prime of a remarkable career when he gave the sermon. 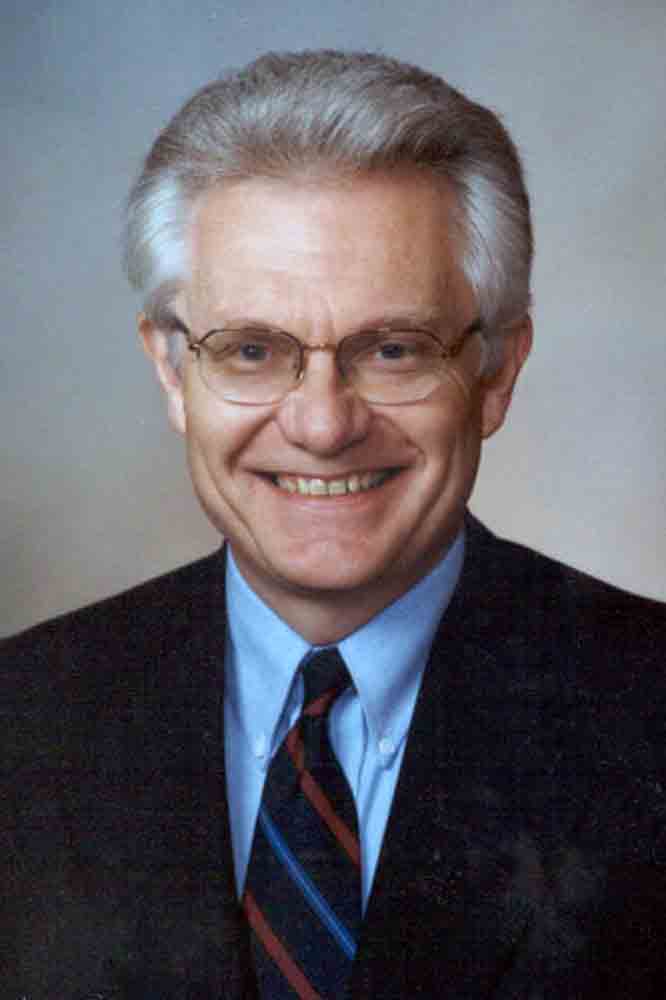 The Rev. Leicester R. Longden did his dissertation on the Rev. Albert C. Outler and is planning a biography. Photo courtesy of University of Dubuque Theological Seminary.

He’s credited with groundbreaking work as an editor of John Wesley’s writings, and drawing from them would formulate the Wesleyan Quadrilateral. He also chaired the early Theological Study Commission on Doctrine and Doctrinal Standards of The United Methodist Church.

“Albert helped bring historical perspective and theological foundation to the new denomination,” said Texas Conference Bishop Scott Jones, one of Outler’s last students at Perkins. “He had the intellectual credibility that helped shape who we are today.”

The nine-volume “Albert Outler Library” documents his prolific writing on a range of subjects, including the Holy Spirit, pastoral counseling and psychotherapy. Outler also was an outstanding Methodist ecumenist of his era, serving as a delegate to the Consultation on Church Union and as an official observer at the Second Vatican Council.

If you wanted a brainy Wesleyan held in great respect by Christian leaders worldwide, Outler was the guy.

“He had a lot of standing to be called ʽMr. Methodist,’” Longden said.

Though Longden probably knows more about Outler than anybody at this point, he hasn’t uncovered how he got the assignment to preach at the uniting service.

But Longden sees the choice as common sense. Outler’s reputation argued for it. Curiously enough, so did Outler’s having opposed the merger earlier – not the idea of it, but what he saw as the undemocratic way it was unfolding.

That Outler was now on board, and willing to preach the prime-time sermon, was in Longden’s view a reassuring signal to those wavering about the wisdom of the merger, including some of Outler’s fellow Southerners.

“He had the intellectual chops and he had the background,” Longden said. 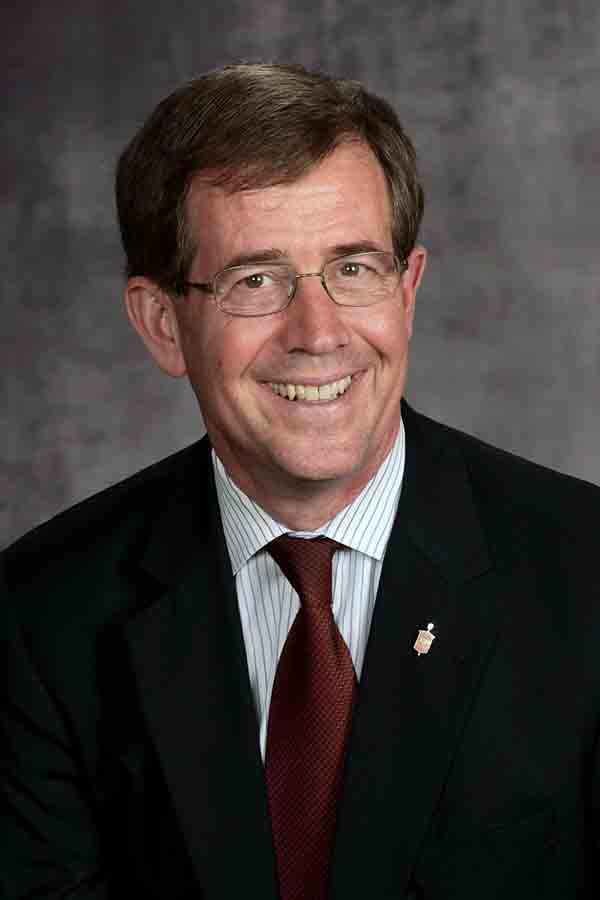 The Rev. Carlton Young was, in 1968, a Perkins professor and music director for the Uniting Conference who traveled with Outler to planning meetings for the event.

He too sees Outler as the natural choice.

“Apart from his theological brilliance and notable homiletical skills he was a superb politician, and importantly, was trusted by Methodists and EUBs,” said Young, editor of The United Methodist Hymnal.

Outler’s sermon has come to be called “Visions and Dreams,” but the title he put on his hand-written draft was “The Unfinished Business of an Unfinished Church.”

His labor on the sermon is illustrated by the scratch-outs and scrawling, red-ink revisions he made on legal pad pages that are part of his vast archival collection at Perkins’ Bridwell Library.

The struggle to get it right is confirmed by tapes which show Outler making changes even as he dictated to his secretary for the typed version, said Timothy Binkley, Bridwell archivist.

But for the uniting service, which began at 8:30 a.m. on April 23, the bespectacled, gray-haired Outler, dressed in robe and stole, delivered his message in a confident Southern accent, enunciating key words for emphasis and gesturing often with his right hand.

“Here we are this morning, gathered together from all over the world and from all sorts and conditions of men — to celebrate a birthday, our birthday, as The United Methodist Church,” he began.

Outler’s text was Acts 2, and he argued that just as the church’s work began with Pentecost, the new denomination’s work was beginning with the Uniting Conference.

Given the assassination of Martin Luther King Jr. just days earlier, the race riots that followed, and widespread protests of the Vietnam War, it’s no surprise that Outler described a world “in furious and agonizing turmoil.”

Outler drew on language popularized by the Consultation on Church Union in arguing that The United Methodist Church must meet its mission by becoming “truly catholic, truly evangelical, truly reformed.” 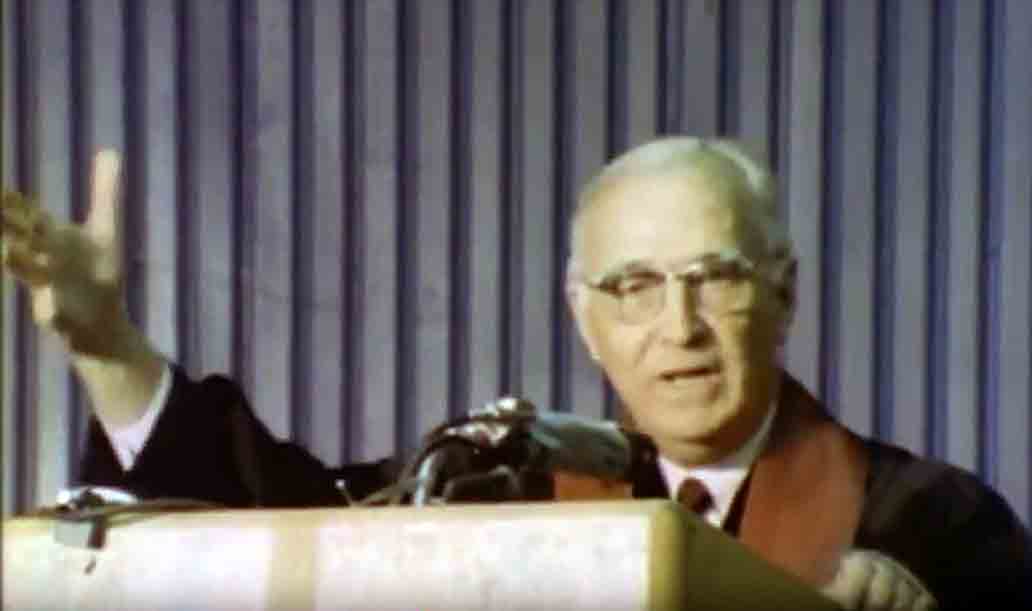 See an excerpt of the Rev. Albert C. Outler’s preaching on April 23, 1968, during the uniting service of the Uniting Conference.

The catholic emphasis was one of equality and inclusivity which “rules out all distinctions based on race, sex, class and culture,” Outler said.

But he proclaimed that the church must also be evangelical, “ablaze with a passion that God’s Gospel shall be preached and heard and responded to in faith and hope and love by all who can be reached.” Ever the professor, he insisted United Methodists would fail evangelically if they did not become more of a “teaching church.”

The section calling for a reformed church stresses reliance on Scripture, tradition, reason and experience — the elements of the Wesleyan Quadrilateral.

Outler goes on to say: “The reforming spirit calls for self-examination without self-justification, self-criticism without self-loathing, creative discontent rooted in the conviction that the good is the enemy of the best.”

The address, now as then, seems tough-minded but optimistic, and both eloquent and challenging.

“Outler was willing to believe that people in the church wanted to really grasp and grapple with substantive issues of doctrine and theology,” said the Rev. Andrew Thompson, a United Methodist pastor and former seminary professor who has written about the sermon.

In 2018, The United Methodist Church whose creation Outler celebrated is trying to keep from breaking apart over differences about how accepting to be of homosexuality.

Abraham greatly admires the Uniting Conference sermon, but feels Outler’s brilliance in crafting it was ultimately for naught, given persistent factionalism within the denomination. 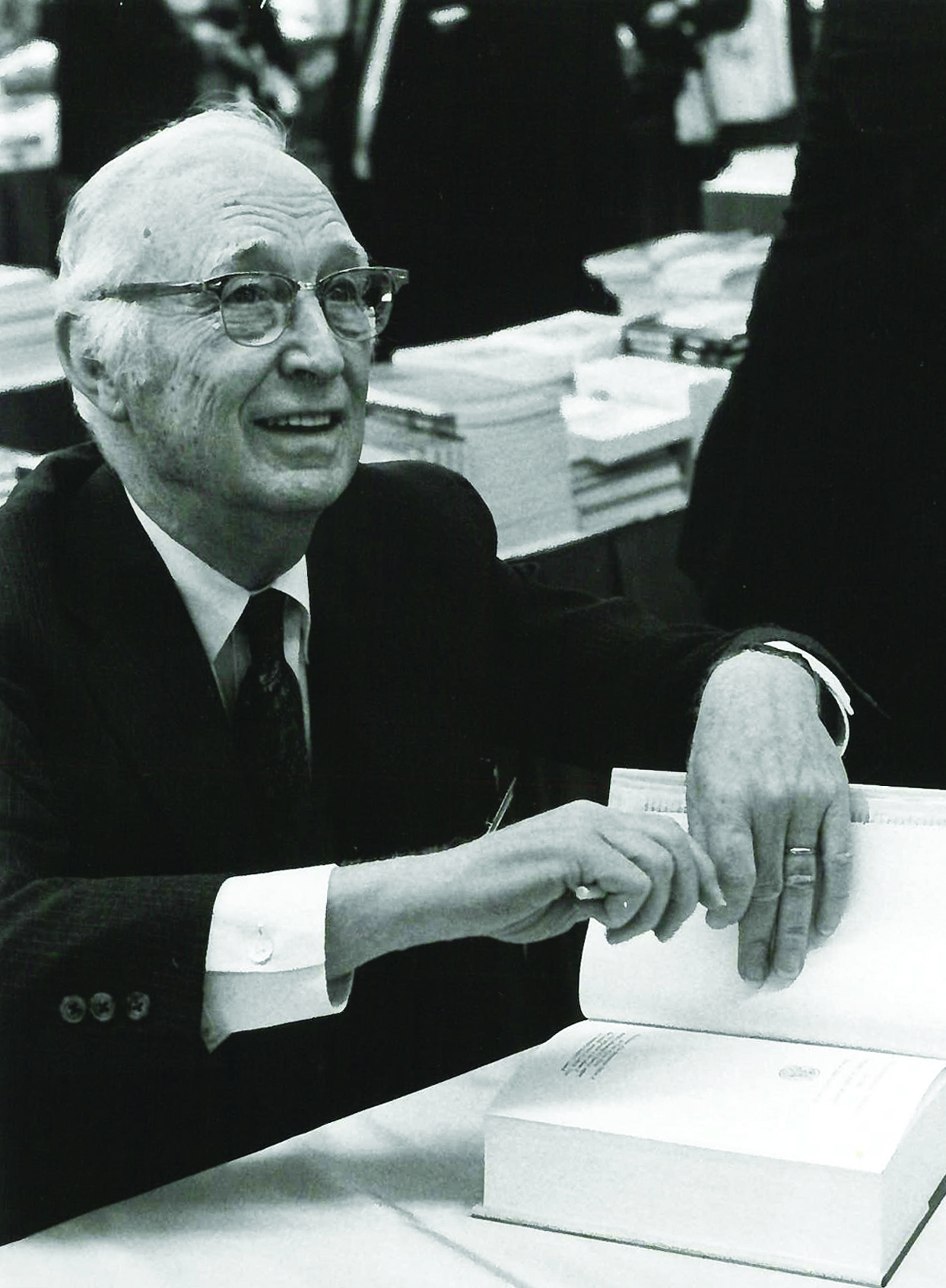 An undated publicity photo shows the Rev. Albert C. Outler autographing books. Outler was chosen to preach for the uniting service of the 1968 Uniting Conference, which saw the creation of The United Methodist Church. Photo courtesy of Steve Beard, Editor in Chief, Good News.

“I don’t think anybody else could have held the church together, and in that sense his achievement was extraordinary,” Abraham said. “But he was given a hand of cards that was going to be losing, no matter what he did.”

He first read the sermon while planning for the denomination’s 50th anniversary observances, and he’s become such a fan that he’s provided copies for the Council of Bishops, Commission on a Way Forward, Connectional Table and church agency executives.

Day wrote in a recent column: “I offer ʽVisions and Dreams’ as required reading to remember and stoke the hope of our 1968 birthright.”

The 300-year-old story of a beloved Christmas song is filled with scandal, politics and dubiousness. Yet the 19th-century French carol remains a favorite. Chrystal Caviness reports for UMC.org.
General Church