United Methodists across the connection joined the national response to the guilty verdict handed down April 20 in the trial of former Minneapolis police officer Derek Chauvin for the killing of George Floyd.

A jury convicted Chauvin on three counts of murder and manslaughter.

Bishop David Bard, interim episcopal leader of the Minnesota Conference, described the verdict as both a measure of relief and a profound sadness, noting that, “no verdict can return a person from the dead.”

In Minneapolis, the decision was met with both relief and acknowledgement of the significant anti-racism work that remains.

The Rev. Dana Neuhauser, who serves New City Church — a United Methodist church plant in South Minneapolis — was at the site of Floyd’s memorial when the verdict was announced. Most of the people she was with were bracing for an acquittal, she said.

Meanwhile, the Rev. Laquaan Malachi, who serves North United Methodist Church in North Minneapolis, said he feels like he’s in a limbo of sorts.

“We are celebrating the mediocrity of our justice system,” he explained. “This verdict does not exonerate the system but instead highlights how difficult it makes justice when there are no cameras watching. This verdict was a baby step and we have a long way to go.”

Throughout the past year, both Malachi and Neuhauser have spoken at vigils, marched for justice, protested police brutality against people of color and provided a pastoral presence during the uprising that followed Floyd’s murder. While they are relieved that Chauvin was held accountable for his actions, they acknowledge that the work for an equitable and just world is just beginning.

“From here, we continue ahead,” Malachi said. “This is an important momentary victory, but the work of healing a broken world occurs in our everyday interactions with those around us. The work of the church is to live into this world that we are convinced can be real.”

“Sometimes it feels like shoveling in the middle of a blizzard and all I’ve got is a teaspoon,” Neuhauser said, “but I’ll keep shoveling.”

The Rev. Ginger Gaines-Cirelli, senior pastor of Foundry United Methodist Church in Washington, D.C., was in Minneapolis and present with the Floyd family as they awaited the verdict.

She described it as “a heavy consequential moment for us as people of faith.”

“This is potentially a real pivot moment to recommit to address how to dismantle these things instead of pretending they’re not real,” she said in a Facebook Live post on Foundry’s page. “I believe God is … always with the oppressed and the suffering.”

Church leaders expressed the sense that the verdict was just while urging the religious community to be involved in ending widespread racism and systemic injustice against people of color.

M. Garlinda Burton, interim top executive of the United Methodist Commission on Religion and Race, noted that the Hebrew word for justice, mishpat, occurs more than 200 times in the Old Testament.

“God has set an anti-racism agenda for us and God expects us to live that out in our relations with Christ and one another,” she said. “It must start with hard conversations and penitent prayer and action, and truth about what the U.S. Christian church community has failed to do and be.” 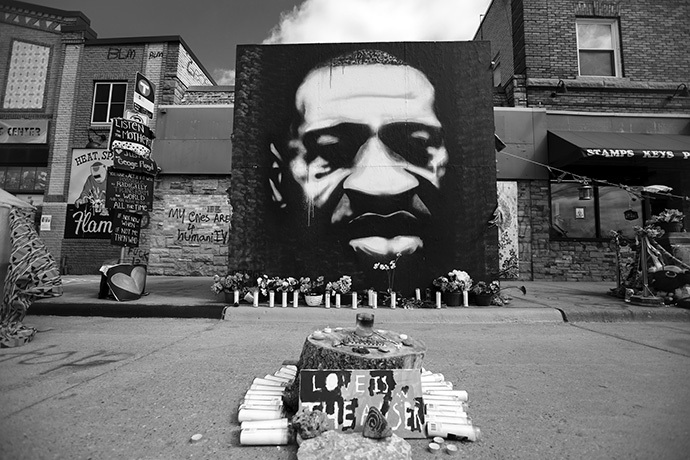 In a statement, the United Methodist Board of Church and Society wrote: “As followers of the Risen Christ, we must name white supremacy as sin, and state that true justice will only be achieved when we reconstruct the public safety systems in each of our communities so that Black, Brown, Indigenous and People of Color receive equitable safety and security.”

The Baltimore-Washington Conference, Black Methodists for Church Renewal and United Methodist Women issued a joint statement calling United Methodists to action, including working for comprehensive police reform and lifting up and practicing the Social Principles and resolutions on racism. They also shared a list of resources for working toward anti-racism.

In the aftermath of the verdict, the United Methodist Council of Bishops released a statement calling for dismantling systemic racism and reminding the church of its biblical mandate to work for justice.

“The racial violence experienced by communities of color has pushed us to think more deeply about how white supremacy functions in our society,” the statement reads. “We are called as people of faith to work for a world in which love, peace and justice reign.”

Floyd’s May 2020 death was a catalyst that led to the creation of the denomination’s “Dismantling Racism” initiative, launched weeks later.

While relief and even brief exuberance are understandable in the wake of the conviction, United Methodist bishops also urged the church to continue the hard work of racial reconciliation.

“We need the Holy Spirit, the breath of Jesus for the continuing work of dismantling racial inequity … the work of building Beloved Community, the work of love,” Bard wrote.

Added Bishop Grant J. Hagiya of the California-Pacific Conference: “This verdict represents the basement and not the ceiling of what needs to take place in our nation.”

Bishop Peggy A. Johnson of the Eastern Pennsylvania Conference suggested that, “we shed some silent tears along with our many brothers and sisters who have been traumatized by racism, unjust systems and brutality.”

“Many people have not received justice in the past, and racial inequity and violence against people of color has been a painful reality,” she said.

Bishop Sudarshana Devadhar of the New England Conference said the Chauvin conviction “provides a measure of justice for George Floyd and that ray of hope for all who’ve been waiting for accountability.”

Dismantling Racism: Pressing on to Freedom
We Are God's Family: Personal Encounters with Racism
Ask the UMC: What does The United Methodist Church say about racism?
R-Squared, a resource hub for engaging in antiracism

More work needs to be done around racial issues, he said, adding that “justice is not complete until all children of God can live together in community, with mutual respect and dignity and equity.”

Chauvin and his family also are suffering, several bishops acknowledged, and are worthy of the prayers of United Methodists along with Floyd’s family.

There are “no winners in the George Floyd murder case,” said Bishop Frank J. Beard of the Illinois Great Rivers Conference. “We are all hurt and weakened by all forms of injustice and pain. I pray for Derek Chauvin and for his family. I continue to pray for the family of George Floyd. I pray for our police officers and those sworn to protect and to serve.”

Gaines-Cirelli of Foundry also encouraged prayer for the members of the jury.

“Not everyone will be supportive of their decision” and may respond to them negatively, she said. “Let’s surround them with prayer.”

He spoke of feeling relief at the verdict, especially because of past disappointments when police were absolved in killings of unarmed Black people. He also urged his congregation to stay engaged.

“We need to be working more toward justice because today it’s George Floyd, but tomorrow it’s Daunte Wright, and tomorrow it’s all the others who have gone unnamed who we still have to fight for,” Murriel said.

Other United Methodist organizations and partners also commented on the verdict.

The Rev. Michael L. Bowie Jr., national executive director for Strengthening the Black Church for the 21st Century, described it as being “like Jesus breathed on our nation,” but he noted that hours later, a Black teenage girl was shot by police in Columbus, Ohio.

“Until police reform and the systemic racism in this country is dismantled, we unfortunately will continue to live with the fear of not being able to breathe,” Bowie said.

The Rev. Reuben Eckels, domestic policy advocate at Church World Service, said the verdict has the potential to be a pivotal moment in the history of racial justice in America.

“One verdict does not change an entire system or culture, but it provides a sense of accountability that we as a nation must endeavor to reproduce if we are to ever truly achieve racial justice.”

The Rev. Keith Boyette, president of the Wesleyan Covenant Association, said, “Our system of justice was permitted to work and the jury carefully weighed the evidence and arrived at a verdict consistent with the law. We respect the jury’s verdict.”

United Methodist Women top executive Harriett Jane Olson said, “As people of faith, we celebrate even as we continue our advocacy work. May justice roll down like waters, today and in days to come.”

The first Asian American bishop elected in The United Methodist Church helped the church grow more ethnically and racially diverse. He also had a great sense of humor.
General Church

After extending their bishops’ terms a second time, United Methodist leaders are urging a special election to elect new bishops.
Mission and Ministry

Sharing from their abundance, the Mukandis of Bwanya United Methodist Church give clothing and food baskets to people from six congregations.